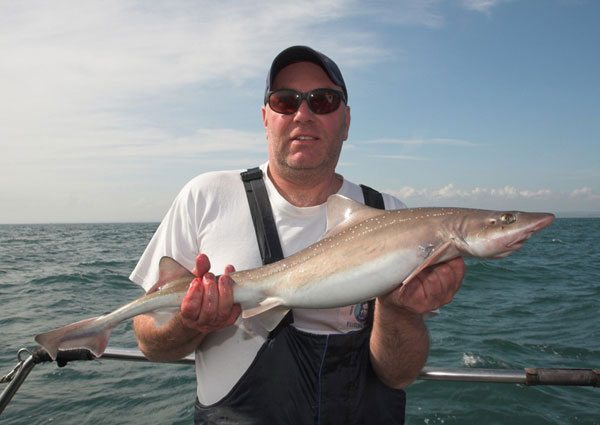 The starry smoothhound is closely related to the smoothhound and resembles it closely. The lower lobe on the tail is larger than its relative and the denticles are broad with grooves along their length. The nasal flaps are narrow. The coloration is the same as the smooth hound but it has small white spots on the upper sides which gives the fish its distinguishing name.

It is generally accepted that there is only one species of smoothhounds around the UK coastline and that is the starry. A paper on DNA studies of the smoothhounds can be veiwed at – http://icesjms.oxfordjournals.org/content/66/3/561.full

The starrysmooth hound grows to a length of around 1.8 metres and can weigh 13 kg.

Found mainly in water to 70 metres deep in waters from the southern reaches of the UK down to the Mediterranean and up into the southern North Sea up to Danish waters. It prefers a seabed of sand and gravel.

The crushing teeth are capable of smashing the shells or hermit crabs and these together with other crustaceans form the major part of their diet.

As for smoothhounds, crabs, peeler and hardbacks, and hermit crabs are effective baits. Squid will also take this species as will ragworm and cocktail baits.