The cuckoo wrasse is one of the most distinctively coloured of the cold water wrasse species with the male in particular taking on tropical hues. The male has bright blue to purple markings on the head and body over a background which can vary from yellow to orange and green. The females are more subdued and tend to an overall reddish orange with a black line along the dorsal towards the tail broken up by lighter spots; the fins may also have a blue border. Immature males have a similar colouring to the female but without the dorsal markings. The cuckoo wrasse is streamlined with a pointed head and protruding mouth which contains canine teeth. There are 16-18 spines in anterior section of the dorsal fin and 11-14 in the posterior section.

Cuckoo Wrasse are generally a small fish but can reach weights of over 1 kg.

The cuckoo wrasse can be found in depths from 2 to 200 metres but is most frequent from 20 to 80 metres. It prefers mixed ground and rocky areas.

Although worms and peeler crab will take cuckoo wrasse a strip of mackerel is the mostly likely bait to secure one of this species. 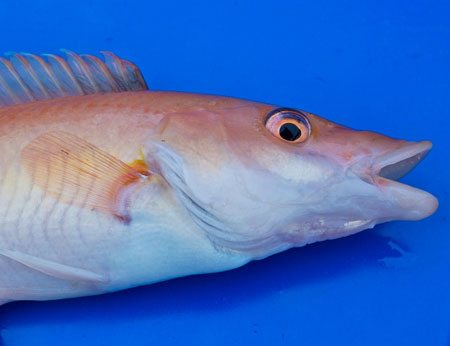 How to Tie a Bomber Rig