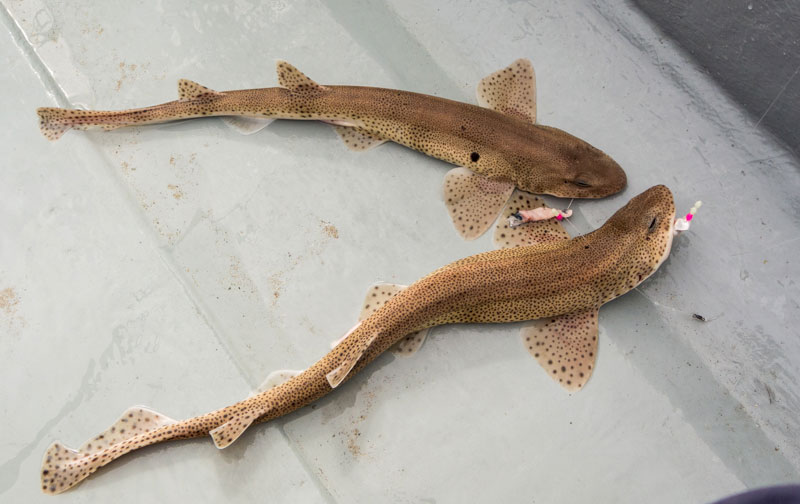 This small member of the shark family has a long, low tail fin the lower lobe of which is under developed. The two dorsal fins are situated towards the tail and the first of these starts behind the base of the pelvic fin. It can be confused with the bull huss however the nasal flap in the lesser spotted dogfish (LSD) have little or no separation whereas in bull huss the flaps have a broad interspace. The LSD is generally a sandy brown colour with small dark brown spots but the predominant colour can vary to a dark brown depending upon its habitat. The underside is a creamy white.

The LSD is one of the smallest sharks and it’s unlikely that the maximum size will exceed 1.9kg and normally the fish will be around the 1kg mark.

The lesser spotted dogfish will be found over soft bottoms comprising of sand, fine gravel or mud. It will inhabit waters from 3 to 400 metres with the majority being found at the shallower end of the range. The LSD is an egg layer and these will be laid in shallow water between November and July. It’s an extremely common fish in the North Sea and southern end of the north Atlantic and can be found as far south as the Mediterranean.

While the LSD will eat bottom living fish its main diet comprises crustaceans including crabs and shrimp, molluscs and polychaete worms. It will scavenge any fish carcases on the sea bed.

Oily fish baits such as mackerel, blueys or herring will attract the passing LSD as will peeler crab. They can be a pest when fishing with large baits for other species. The shore angler can target them with sandeel and a cocktail of ragworm and fish bait can be very effective.

bull huss nasal flaps on the left, lsd on right