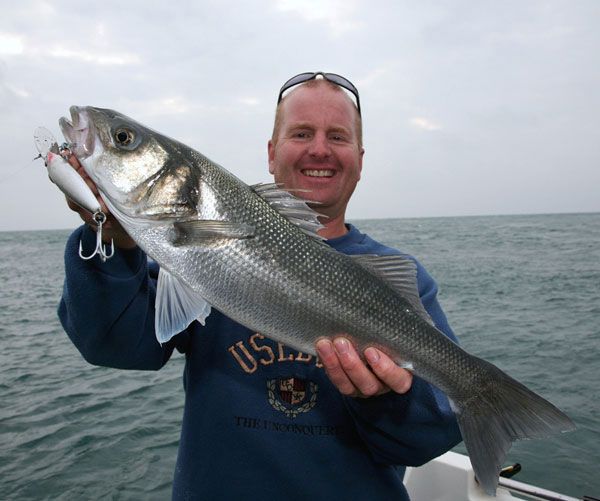 The colours of a bass vary from greeny-grey on the back merging into brilliant silver on the sides and a silvery-white belly. It has prominent scales on its streamlined body. The bass has two large dorsal fins the first of which has 8-9 spines. It also has sharp spines on the lower edge of the gill cover and should be handled with care.

The bass is relatively common in the waters around the UK and in habits the waters from Norway in the north down as far as the Mediterranean and West Africa. It is an active shoaling fish in inshore waters and will regularly be found in estuaries, particularly when in its juvenile stages. The bass tends to breed in May off the UK. It is to some extent a migratory fish although many areas hold year round populations of fish up to 1.5kg.

Fish is the main diet of bass in particular sandeels, sprats and other small members of the herring family. They also eat large quantities of squid and crustaceans.

The most popular all round shore bait for bass off beaches is the fresh lugworm with peeler crab producing most fish over rocky marks. Live fish baits such as sandeel and mackerel can produce some excellent specimens both from the boat and shore. Float fishing with live baits is becoming increasing popular with anglers targeting reef bass from the boat. After an onshore blow razorfish and slipper limpets can be very effective from the beaches.

A large variety of lures will take bass both from the boat and shore. From the shore spinning with silver lures such as the ABU Krill or the Dexter wedge in its various guises will produce fish. Plugs are very effective over shallow rocky marks due to the fact that they are less likely to snag and their size tends to produce bigger specimens.

Redgills, Storm Sandeels and other eel shaped lures will also produce fish and the risk of snagging when fishing over shallow rocks can be reduced by fishing them below a bubble float or Sbirolino floats which can be obtained either for surface fishing or slow sinking.

Shads are very effective both from the shore when spinning and fished on flowing traces from the boat. In certain areas pirks such as the Yann can take some large specimens of bass.