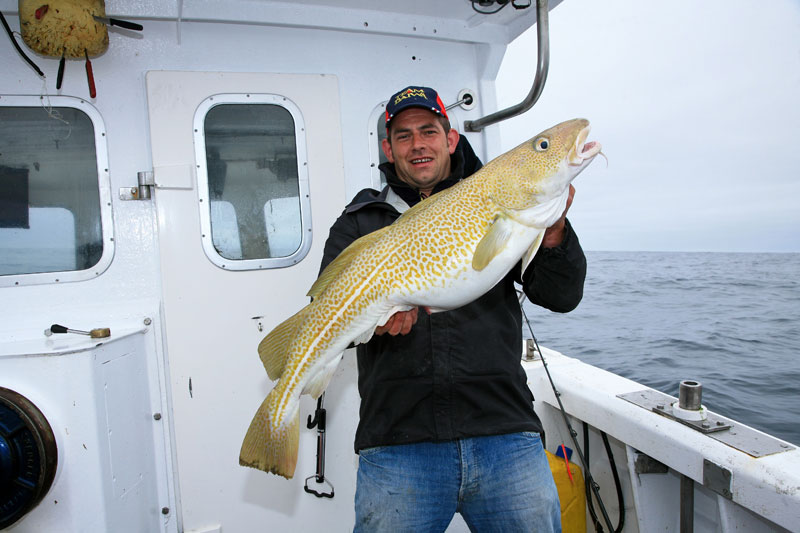 Probably the most recognisable of the cold water sea fish that the angler fishing in northern European waters is liable to come across, mostly due to its popularity with rod and line anglers. The cod varies in background colour from greenish on fish which inhabit the deeper waters to reddish brown on fish which have taken up residence in kelp. The back and sides have dark and light mottling in all cases. The lateral line is conspicuously light, continuous and has a smooth curve over the pectoral fin.

There are records of fish of 90kg (200lb) but the maximum today will be unlikely to reach much more than a half of that size in Scandinavian or Icelandic waters. The UK shore angler can expect fish averaging around 1.5kg and the capture of a 5 kilo fish is exceptional. Even from the boat fish of over 10kg are no longer common unless the angler is fishing the waters near the Arctic Circle.

The cod can be found in a variety of habitats from the shoreline to well down the continental shelf, in depths of 600m. At the southern end of its range the cod tends to only inhabit the shallower water in winter, where, as elsewhere it’s the smaller, younger fish which live close inshore. It will forage for food both on the sea-bed and in mid-water. The cod generally spawns between February and April in water about 200m deep. Inshore waters of this depth are only found in the northern fjords. The cod has been exploited for years as a food fish and nowadays stocks are dangerously close to extinction in some areas.

There is not much that a cod won’t eat but a wide range of crustaceans, worms, brittlestars and fish are among its main food sources. The fish species it targets include herring, capelin, and sandeels and increasingly in UK waters the pipefish.

Although it depends on the venue and the time of year peeler crab is probably the top bait in the UK particularly for the shore angler. Closely following crab would be the various worms with lug, both fresh and frozen black lug being the most effective and rag also producing fish. The matchman’s favourite white rag will often take fish on days when more accessible baits fail.

The various shellfish, mussels, razorfish and clams will all take fish on their day and are particularly popular with boat anglers around Scotland and the North Sea. Large squid baits will take the bigger cod and this bait is extensively used from the boat in the waters around the south coast of England.

In the more northern cod holding areas fish baits are extensively used both from the boat and shore with mackerel, herring and blueys all taking their share of fish. Combining two or more baits into a cocktail on the hook can often be very effective with lugworm and mussel being a favourite in the north.

Where the water clarity is good lures can be very effective for cod in particular from the boat. Pirks are probably the first lure that the angler thinks of when targeting cod and with the growing popularity of pirk casting much light lures can be used. The chrome pirk is still popular although various painted lures are now available and will take their fair share of fish.

Plastic or rubber worms, eels such as the redgill, or shads can be very effective fished either on a flier above a pirk or on a flowing trace either slowly retrieved or hopped along the bottom. Large shads fished in conjunction with a leadhead are a highly successful method of fishing for large cod in the clear northern waters.

Muppets are also used extensively for cod but these are generally fished with bait and are more an attractor than a lure. 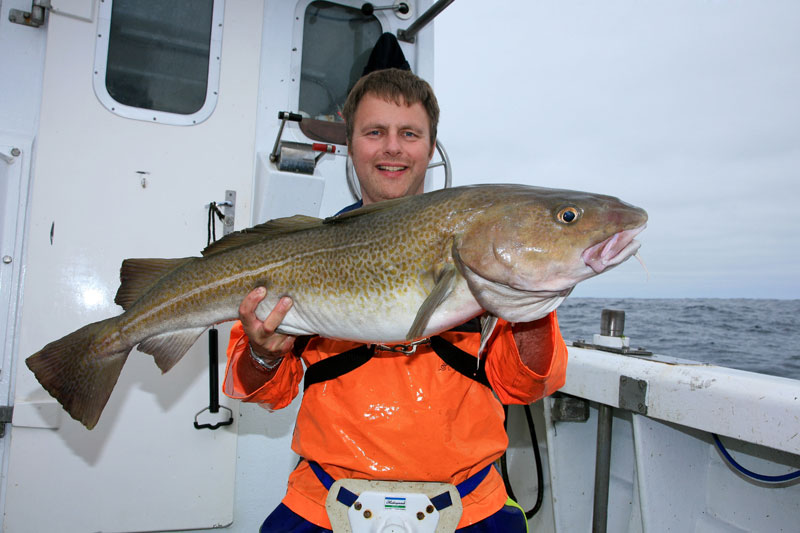