My eyes were first drawn to the Shimano Tyrnos reel when a friend received a mighty Tyrnos 20 5.1:1 single speed as a competition prize. It looked a hardy and capable reel but with braid at the height of popularity I wondered how much use an ox-like reel of that size and high gear ratio would be in home waters. Shimano’s introduction of smaller Tyrnos models in single and twin-speed retrieve has significantly increased UK sales potential since.

The Tyrnos 12 2-speed that arrived for testing was perfect for braid. The narrow spool only needed a small amount of backing for 300 yards of 50lb Power Pro to fill it, while spool width combined with a wider than normal right side-plate (to accommodate the extra gearing) certainly make for a chunky reel. The reel was paired with a 30-50lb rod that’s equally at home for summer wrecking or heavy winter codding. 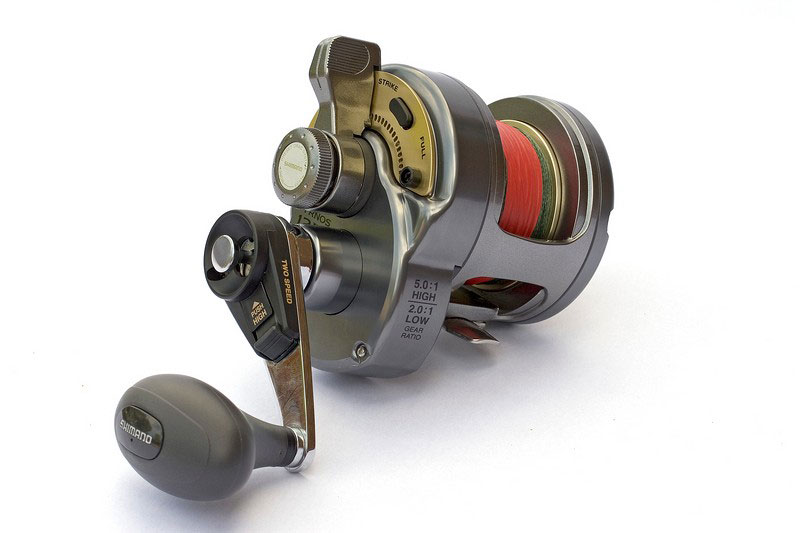 On its first outing, I just put my gear in the boat’s rod rack, sat back and said nothing. It wasn’t long before the Tyrnos drew attention and comments ranging from “That’s different” and “Expensive is it?” to “What an ugly ******d!” I’m still trying to fathom whether the last comment was directed at me, or the Shimano.

The large handle is ultra comfortable, while the lever drag is easy to set via the big preset adjustment dial. The ratcheted lever has nearly the full 180 degrees of travel from free-spool to full pressure. There is a positive ‘click’ when backing to free spool, and the central button to action adjustment beyond the STRIKE position is again easy to use.

Though similar in layout to Shimano’s famous TLD reels, the more modern drag feels smoother and more progressive. Changing gears is a cinch. If you have used a TLD two-speed multiplier or the Shimano Beastmaster reels that preceded them, then control will look and feel familiar. Push in the button on the end of the handle shaft to engage low gear. The high gearing is re-engaged by simply pushing the slider on the handle. Crucially, there is no need to stop winding to change gear. 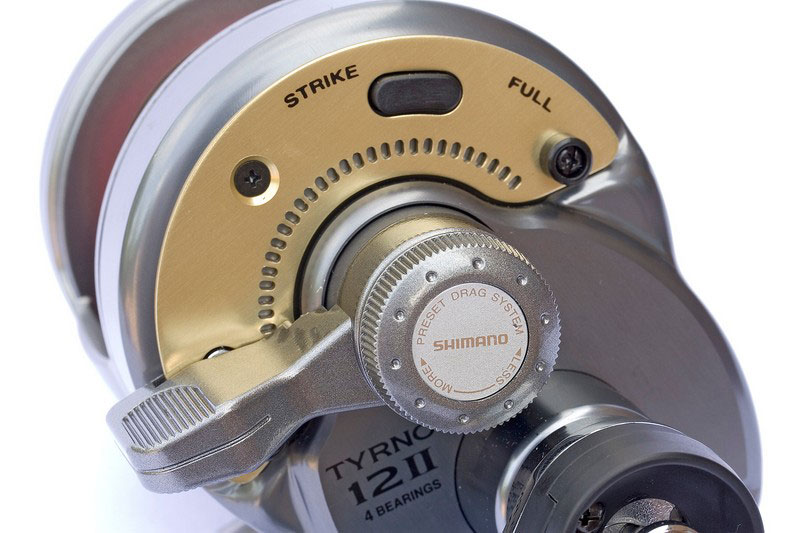 A line out alarm or ratchet stud-button is located on the left-hand side-plate. Engagement is positive and very audible. That loud ratchet leads me on to the only feature of the Tyrnos that I really do not like… that is anti-reverse mechanism. While the Tyrnos is a clear evolution of the TLD, Shimano’s engineers have chosen not to incorporate the ‘Super Stopper’ silent anti-reverse that is fitted to most of their latest reels. Instead they have stuck with the dual ratchet and pawl systems seen in the TLD. This means that there is noticeable backlash in the mechanism and the Tyrnos clicks when you turn the handle. In fact, this reel can CLICK, CLICK, CLICKLY CLICK for England, Scotland, Wales, Ireland and the rest of the bloody world! I got fed up with people asking me if I had left the ratchet on when reeling in, which is a shame because it is the only thing that detracts from the reel in use. However, if you can cope with the migraine and the abuse then all could be well. 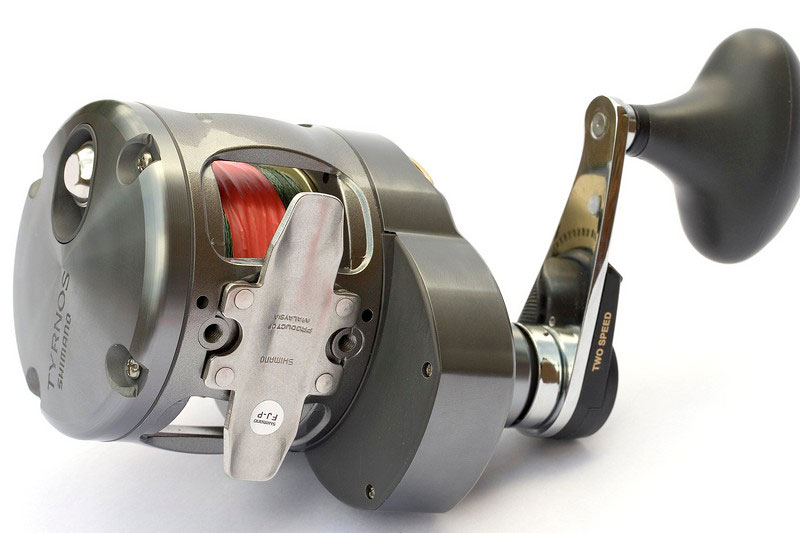 Even in high gear the reel generates impressive cranking power, but switching to low gear shows what the Tyrnos is really capable of. The biggest thing I landed during testing was a 17lb ling, and low gear over-powered it in a totally unsporting way – but is good to know that such awesome power can be called upon at the quickest flick of a little switch. Had I locked horns with one of the big conger eels that the fishing area is renowned for, I am sure I would have welcomed the low gear’s fish taming power. 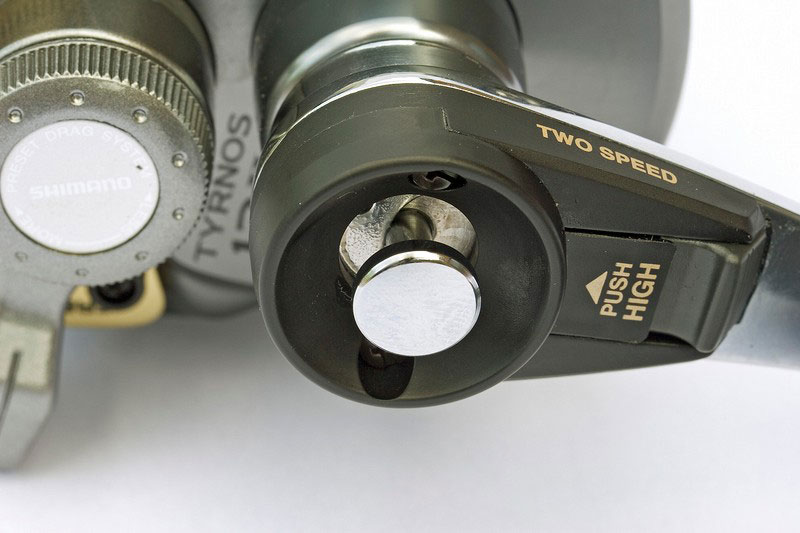 During discussion, some anglers said that they couldn’t see the point of two-speed gearing. Given a retrieve of 3 or 4.1:1 on a reel of this size they have a point, but with the top gear being 5.1 that low gear makes a huge difference that became clarion clear during early winter codding…and the reason has nowt to do with humping out great big cod. The reality is that winching up 1 ¼ lb of lead, half a dozen squid and a 2lb pound dogfish in the middle of the raging tide in 90 feet of water is made almost joyful.

While red-faced others alongside me puffed their equally fish-less way to the surface, pumping the rod into the bargain, I just nudged into low gear and turned the handle – even doing it with just finger and thumb to prove the point. Anyone who suffers with back problems or wimps will love this pain-free facility– just for the record, I have a bad back. Tribulations of deep water, fast tide, big baits or a combination of all three are instantly erased by the Tyrnos low gear option.

At the end of the season I had the reel apart. There was no corrosion evidence at all, but this particular reel that was treated externally with Corrosion Block from new as part of other Planet Sea Fishing testing. The Tyrnos has a carbon/plastic left side-plate that houses the lineout alarm, so there’s little to go wrong there. The duralumin spool runs on a large diameter, non-rotating stainless shaft and sits inside a die-cast aluminium frame. The spool and the shaft are supported on four Shimano anti-rust bearings, while the drag is situated at the right hand end of the spool and is well sealed. There were no problems with the drag at all so I left it alone and didn’t disturb it. 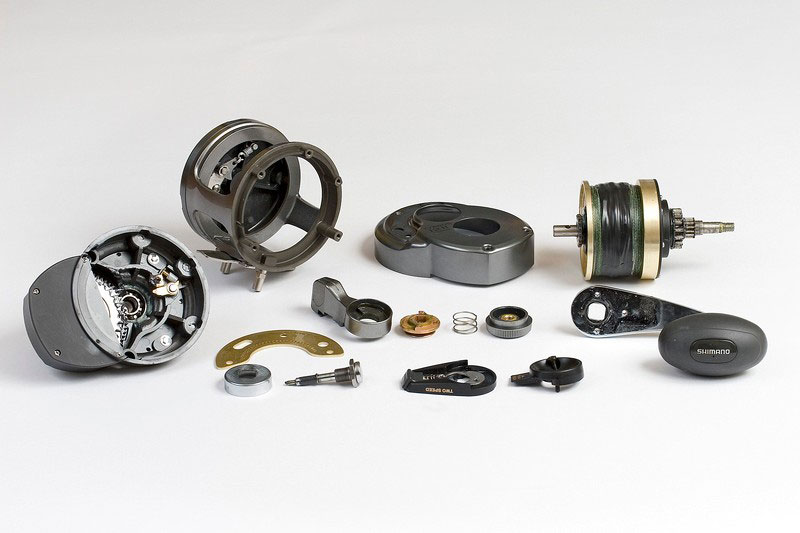 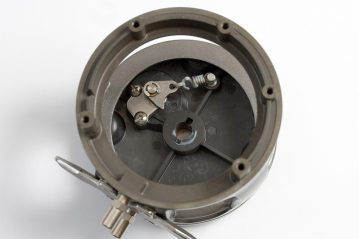 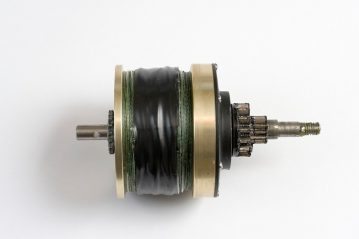 The stainless steel gears are impressively large, and there was a reasonable amount of grease in place. It is good to note that by taking off just the handle, drag lever and right side-plate (which is carbon plastic with an alloy cover), all routine maintenance can be carried out. Unless something is malfunctioning, there is no need to dismantle the reel further.

The only thing that looks out of place is the anti-reverse mechanism. Most twin pawl reels (including single-speed Tyrnos) have a mechanism consisting of two springs with pawls that engage with a ratchet, and all the force pushes down the length of the pawl. The twin-speed Tyrnos has two pawls located one on top of the other, and they actually mesh with the low speed pinion gear, thus preventing it from rotating backwards. The pawl is therefore load-sheared from the gear, and while there are two pawls there is only one spring. Given that this system has been used for years in the TLD two-speed reels there is probably no need for concern, but I would have preferred fitment of the more up-to-date ‘Super Stopper’ system. 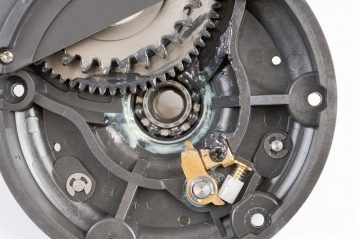 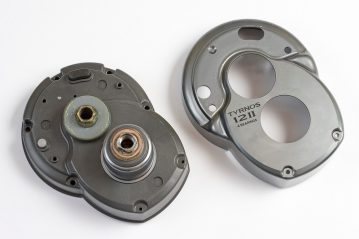