Iceland is home to some of the most visually unique and fascinating landscapes in the world. While driving cross-country, visitors are constantly accosted by sights that hold the eyes and force quick intakes of ragged breath. Some scenery looks positively lunar and it’s difficult not to drift from reality to daydream at times.

A recent trip with professional angling guide Steve Mason, took me to a location so different that I could only stare out the window of the 4 X 4 mouth agape. It was like crossing some alien desert of hellish black ash in purgatorial contrast with glorious blue skies that stretched overhead forever. Our group was completed with Irish anglers Steven O’Donovan, Bryan O’Rourke, and Derek Kenrick, all of whom appeared similarly bug-eyed as we lurched and bounced our way off-road for several miles along char-black sands. Steve had seen it all before and wasn’t in the slightest bit surprised by the gawping reactions. 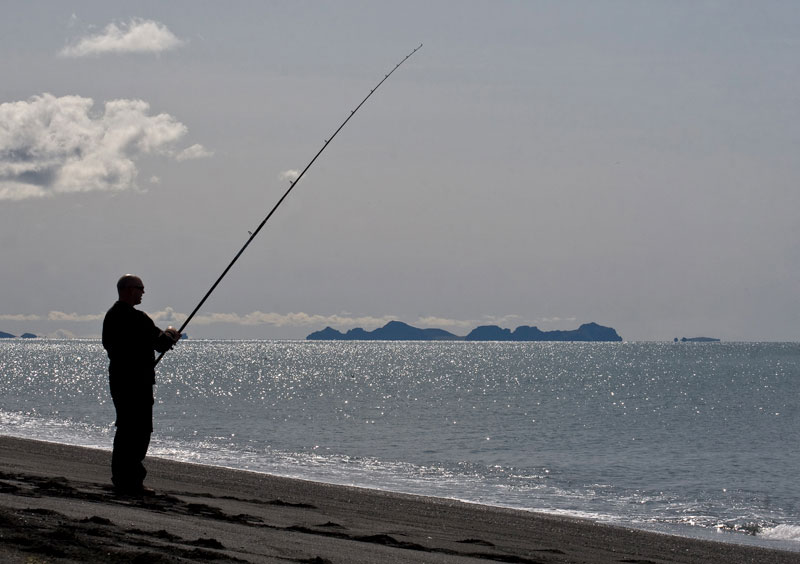 Imagine racing through a suffocation of engine-clogging stoor without other trace of humanity or hope of rescue – this was not a place I would care to break down. After 20 minutes of chundering progress across a relentless soft sand blanket, I spotted what looked like water in the distance but didn’t give voice to the thought. To the right, a battery of huge sand dunes appeared hazily at first, seeming to form out of mirage before solidifying as we drew closer. Suddenly the vast wash of North Atlantic Ocean opened out in front of us in all its raw glory. With the sight came invigorating realisation that the nearest landmass to this southern coastal extreme of Iceland lay due south in the shape of the southern ice caps themselves.

The banked upper shoreline sloped steeply seaward. At a glance, the water looked deep and inviting with a hint of lateral tide. On haunches, the fistful of strange sand that ran through my fingers was less than jet, laid down eons ago by a volcanic blast from one of the region’s myriad volcanoes many of which are still living, breathing things. Perhaps oddly, I thought it might have been warm to the touch, but it was cold as death. Blackness blossomed to wet ebony where waves caressed the otherwise bone-dry shore. 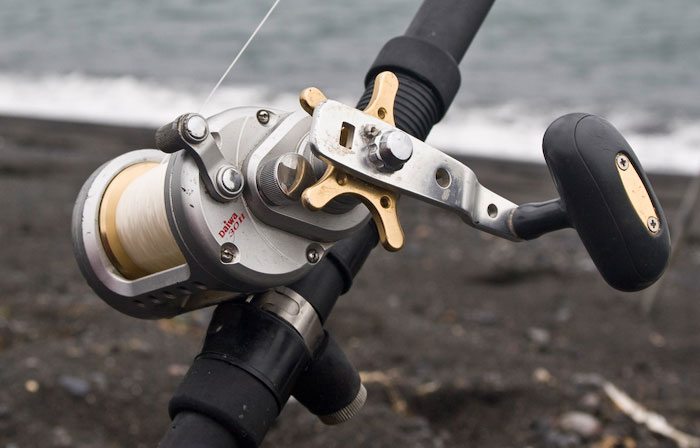 This beach is one of Steve Mason’s favourite venues for targeting large spurdogs. Unfortunately a pressing schedule dictated only a single session could be spent here. Frustrations were increased tenfold by evidence of dense baitfish concentrations which effectively spelled disaster for our spurdog prospects according to a knowing Steve. Literally thousands of guillemots, puffins and gannets were diving madly off the beach, their quarry betrayed by breaking waves that would deposit frantically flapping greater sandeels on the sand. 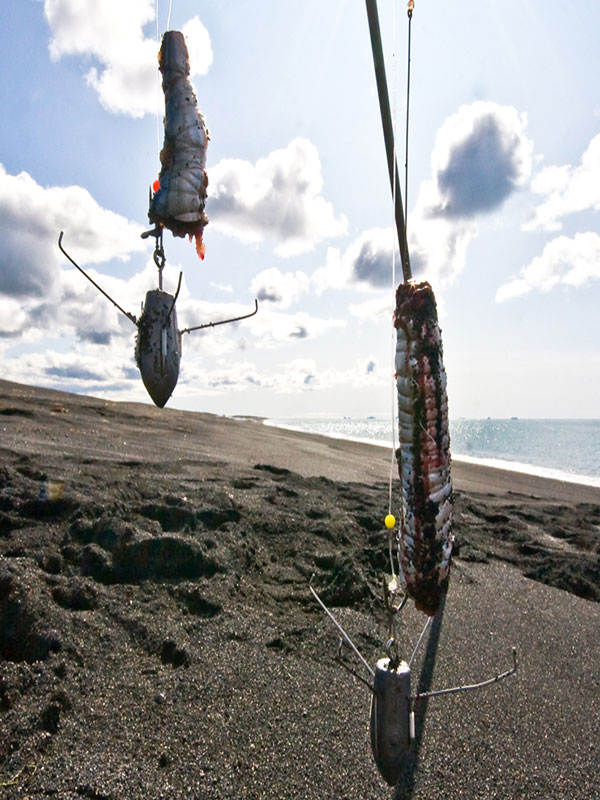 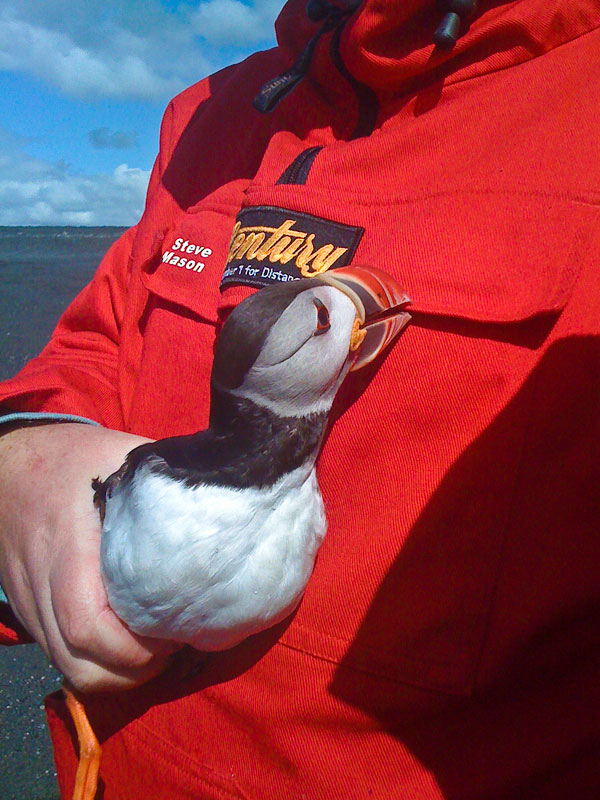 We set up our gear nonetheless, and drank in the otherworld surroundings to a cacophonic backing track of seabird noise. Mackerel too, it seemed, were hot on the heels of the sandeels, as they intercepted our baits at regular intervals. A large Minke whale was patrolling no more than 20 yards out. And just like scenes from some BBC wildlife documentary, balls of harried baitfish regularly exploded on the surface so close as to make the power of High Definition television quite redundant. This was nature in grand motion and anglers stood transfixed while nodding rods went ignored.

Steve seemed immune to peripheral events and was busy telling of huge numbers of double figure spurdogs – some to 20lbs – caught here. He advises large fish or squid baits on pennel 6/0 hooks, which all of the group were using. Even in the absence of spurs there was no shortage of fish. Large whiting and dabs were unperturbed by the huge hooks and retrieved every cast. Often two fish would be extracted on pennel rigs with hooks set mere inches apart. 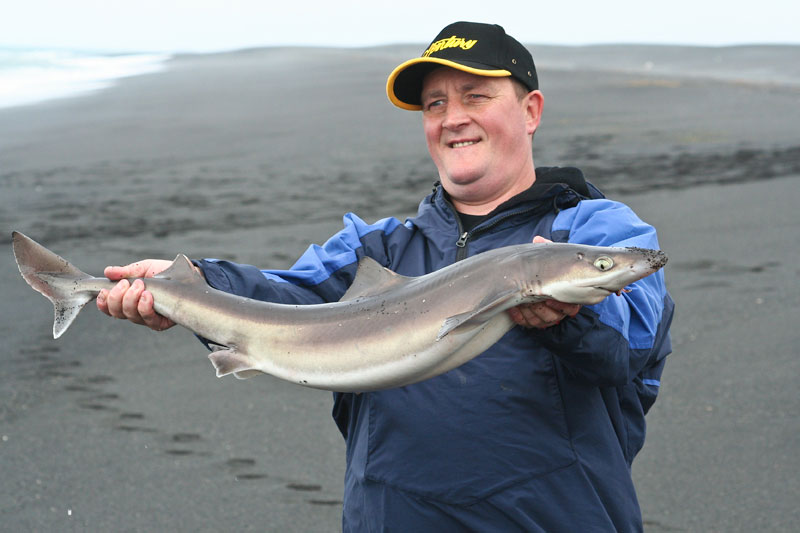 To make the most of the situation we all scaled down to 3-hook flapping rigs with size 1 hooks. You didn’t need to cast far as fish were everywhere. The change resulted in ridiculous numbers of good whiting and big dabs, with instant ravaging bites and fish on all hooks the norm. By UK standards this was fantastic fishing despite the lack of spurdogs.

Alas, you can only catch so many fish before tiredness sets in, and after several hours non-stop action energies were on the wane. To a man, we were enraptured by the sights and sounds of this magical venue and its fishing. So nature conspired to deny us those big spurdogs…there will be another time, and we had done exceptionally well besides. 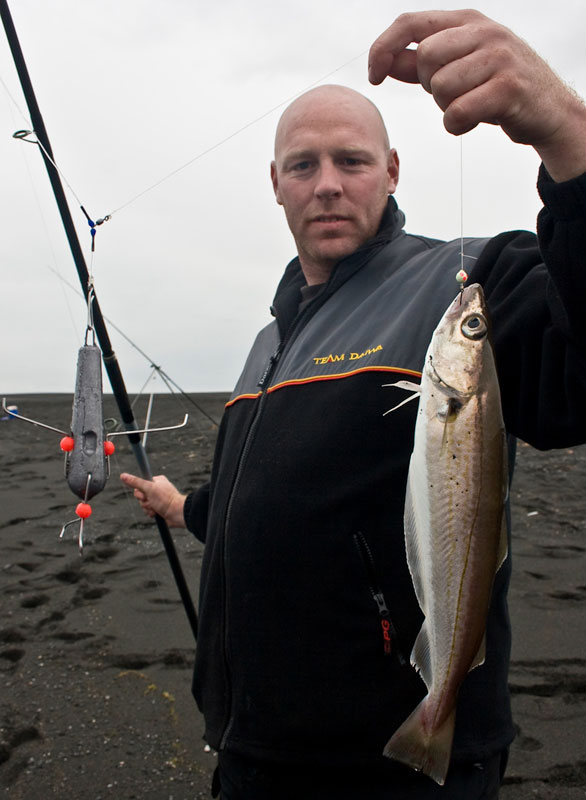 I am constantly surprised by Iceland and keep coming back for more. Fishing on the rocks and piers for cod, haddock and catfish is fantastic, but June to October is peak spurdog season, and a trip to the ‘black beach’ is an absolute must during the week-long fishing excursions Steve Mason specialises in. The bait-massing problem apparently occurs every year in the height of summer. Thankfully the phenomenon lasts just a few weeks and the shoals quickly disperse as soon as a good storm rakes the beaches. And there is more than just fishing to whet the holiday appetite, with bubbling hot water springs, Geysers, raging waterfalls to name but a few of the wild wonders. I have already made arrangements to return next year when I intend to see if those big spurdogs want to play.

Professional sea angling guide Steve Mason offers a wide variety of fishing holidays for individuals and groups. If you want to experience cod fishing of a quality and consistency that just isn’t possible from the UK shore, or you fancy locking horns with big powerful wolf fish from easy marks, then Steve is the man. There are lots of other shore species to catch, and incredible boat fishing can be arranged too. Steve can be contacted through his Facebook page. 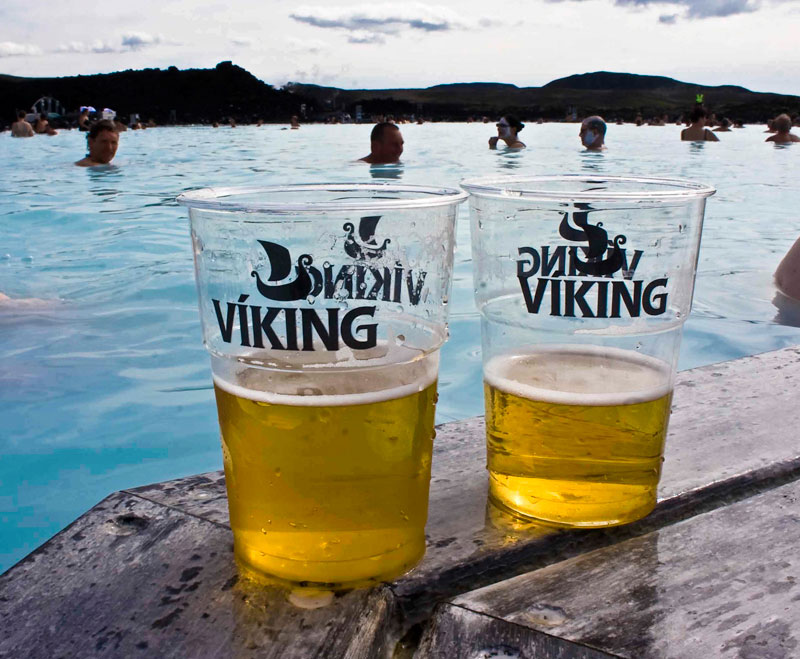