The Port O’ Leith Club from Edinburgh are regular visitors to Scrabster for trips out with Gerald Davidson aboard the Sea Gem. I’m fortunate that when they have a spare space I get a call from Alan Haggon to join the members throughout the year. A break in the weather ensured that the day afloat would be a comfortable one with a good chance of decent sport.

The Sea Gem is a well laid out boat with plenty of room for ten anglers and with all the crew boarded by half past eight we headed out ahead of the other charter boats. Gerald decided that given the strong flood tide and the backwash from the cliffs that heading west would be the best bet for the day.

Years ago the handline boats used to find good patches of winter cod on a mark to the east of Brimms known as the Middleton Road. Unfortunately, whatever used to bring the cod into this area as failed in recent years and a half hour drift proved that this was still the case. To keep the freezer hunters happy the skipper then decided to see if the haddock were still about this late in the season and we tried the soft ground out in 60 metres depth. 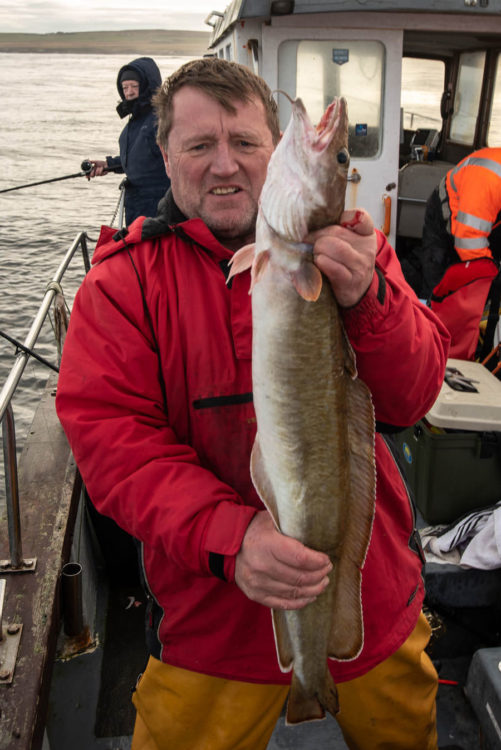 Alan with one of his ling

A couple of small haddies did fall to the baited pirk and paternoster rigs but not in enough numbers to waste to long at this venture.

Gerald pointed the Sea Gem further west past Brimms Nest and into shallower water, tracing the edges of the drop off. Although the we experienced a two knot tide the anglers on board were soon into plump cod. Most of those fishing had set up with single hook baited pirks with an assortment of flyers above the pirk.

Baits varied, with mackerel, mussel and razorfish being the most productive. 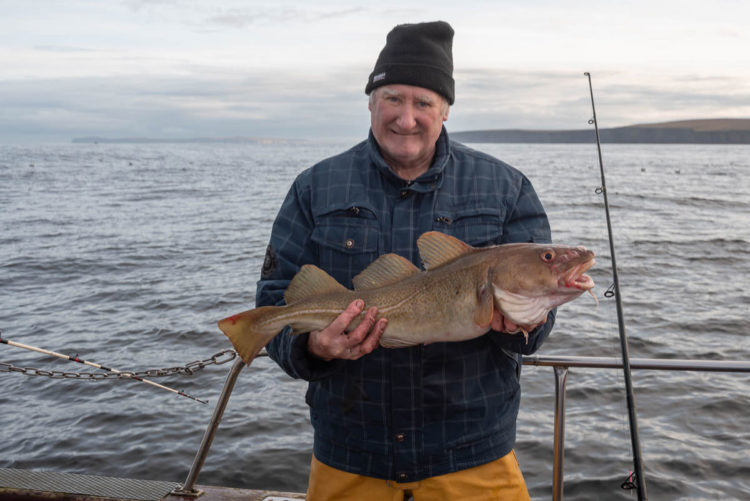 The fish baits soon produced ling to around 8lb as well as the regular cod. The addition of the bait to the lures produced more fish than the plain pirk.

A bump on my rig caused me to look down to see a porbeagle of around 150lb cruising towards the stern of the boat. The shark disappeared after a quick tour and the fish continued to feed.

The cod were particularly energetic and put up a fight well above that expected for their average size of around 4 – 8lb. The best of the day fell to my unbaited pink and white 6oz Scrabster pirk and weighed in at 10.4lb. It went back to grow into a twenty pounder. 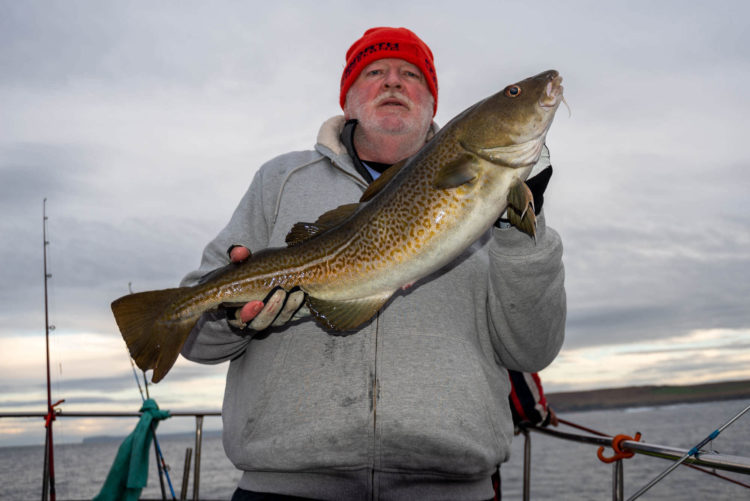 The author with the best cod of the day

Interspersed with the cod and ling were several hard fighting coalies which, although not monsters did put a good bend in the rods. These fell mostly to the flyers with florescent red working particularly well.

The drifts were kept short with the wind controlling the direction of the boat as a particularly long slack tide extended into the afternoon. Unfortunately, with the drift being offshore we were off the fish after a short time as we were pushed away from the ledges rather than along their lengths.

I did use a 10” Eddystone Eel 2013 for a number of drifts but despite lots of hits only one cod was big enough to managed to hit the hook given the size and bulk of the lure. The smaller 6” version worked well as a flyer.

Or attendant gulls took to the air as another porbeagle showed up just under the surface after pinching a cod being retrieved. This broad backed fish was a shark of a different class with a massive length and girth which put it well over the three hundred pound mark. The porgie accepted a ling before disappearing like its smaller mate. Notes were taken to make sure to carry suitable shark gear on future trips over the winter season.

Despite the less than optimal drifts skipper Gerald kept the rods bent as the Sea Gem continued the productive action for the rest of the day. 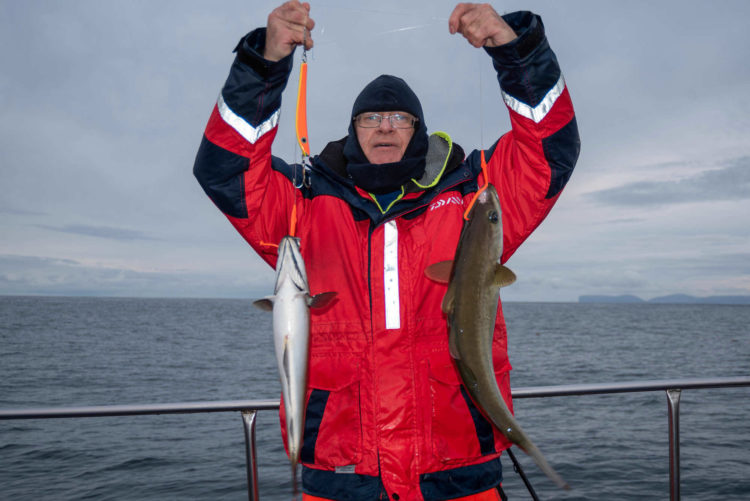 Gordon with a coalie / pollack double

Normally, you can expect one or two octopuses throughout a Scrabster trip but there were literally dozens of these multi-legged creatures around snaffling the lures, skate baits sorted! A solitary squid joined the cephalopod family members much to the delight of my taste buds.

As well as the cod, ling and coalies the catches were supplemented by pollack, dabs, haddock and a solitary lesser spotted dogfish.

End Of The Day

As the sun headed below the horizon the temperature dipped we headed home as the anglers filleted their catch to stock up the freezers at home.

Altogether a great day afloat with enjoyable company, excellent if sometimes brutal craic and plenty of fish to keep everyone happy. 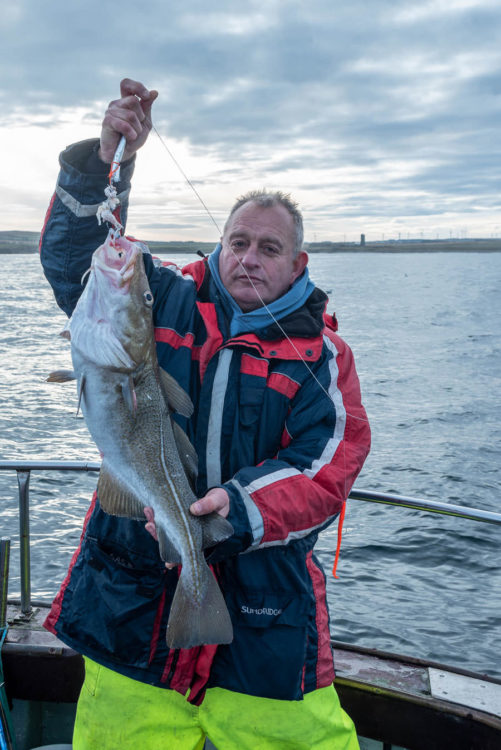 Adrian with a cod on the baited pirk

The Sea Gem is a great angling platform with plenty of room on board and a regular supply of tea and coffee. The skipper is honest about the weather and will let you know before travelling if conditions are suitable for decent fishing. You won’t find a better value for money day out from the far north port.

If you fancy a day out from Scrabster, Gerald can be contacted on 07733 011240. He will keep you right with suitable tides and dates.