It has been a good month generally although one or two species are not showing up as soon as we would expect. In particular red mullet and sole have been scarce so far this season. Having said that sole to 3lb 1oz and red mullet to 1lb 9oz have been landed so it’s not all doom and gloom by any stretch of the imagination. 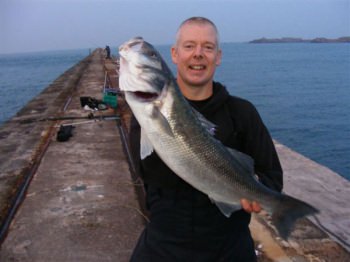 That’s the downside, the rest of the fishing is brilliant! We have experienced some tremendous plug sessions for bass

seeing good numbers of fish with bags of up to 7 fish per rod. Great sport, with fish running to 6lb and one or two bigger ones thrown in for good measure. The biggest bass though have fallen to fish baits anchored on the bottom with the best reported at over 9lb. Black bream are in good numbers with lots of fish in the 2½lb to 3lb bracket. Couches sea bream and giltheads are also putting in an appearance. Most of the giltheads are falling to crab with others on squid and worm. Angler’s who have been ground-baiting have landed thick lipped mullet to 6lb and bags of up to five fish have been taken during targeted sessions. Give the quality of the general fishing huss and eels have been largely ignored but there have been a couple of 40lb plus snakes landed. More than usual numbers in the way of triggers have been taken round the coast and these tough terriers are topping the scales at 2½lb. There are still one or two mackerel being caught, plenty of gars and pollack to 5lb.

Boat sport is dropping off now as the visiting charter fleet end their annual pilgrimages to the island. It is a shame as the fishing is pretty hot; hopefully this is where our local charter boat Smuggler can do well if we can drum up enough trade for him. Once again Colin Dukes produced the goods for one of our regular visiting anglers, Tonto who landed an absolute beauty of a turbot weighing 23lb. That’s the third 20lb plus flatfish aboard Smuggler this year. As well as the turbot and brill, the bass fishing is now in full swing with plenty to aim for if you can find the live bait which can be a struggle.

Tope fishing has been absolutely phenomenal with more fish than you can shake a stick at. Mainly in the 25lb to 35lb range there are better fish nudging 45lb in among the packs. Porbeagle have also been hooked and lost and it may be worth a serious attempt for these powerful sharks, kitted out with suitable gear. Lots of bull huss about too and eels to 50lb have been caught on the rough ground. The smaller boats getting plenty of bass amongst the rocks on plugs, not for the faint hearted this and you should take local advice when trying these marks for the first time.

Kayaking is starting to take off on the Island with the hard few finding plenty of bass to 6lb on the plugs, pollack to over 9lb and when at anchor the various mixed Alderney species can be taken.