Fishing The Firth Of Lorn On Laura Dawn II

Six anglers and I headed out from Oban on Saturday 15th January aboard the Laura Dawn II skippered by Leigh Taylor in search of the first skate of 2022. We were fortunate that a break in the weather allowed us a choice of marks and Leigh decided to anchor up in the Firth of Lorn between Kerrera and Mull in 400+ feet of water.

On the steam out we had a quick stop to try for fresh bait but this proved largely unsuccessful with only a couple of pollack falling to the feathers. Fortunately there was on shortage of bait as Leigh had dogfish and coalies from a previous trip and the anglers had a selection of frozen baits including mackerel, octopus and whiting.

First Skate Of The Year

Around one hour into the session my rod showed signs of more substantial interest than the rattles from spurdogs and I bent into the first fish. The initial part of the fight was uneventful once the skate was off the seabed however the final 10 minutes or so was a struggle as the fish hung in the current near the surface. At was at this point that I remembered that I hadn’t clipped my harness to the reel, a proper senior moment! 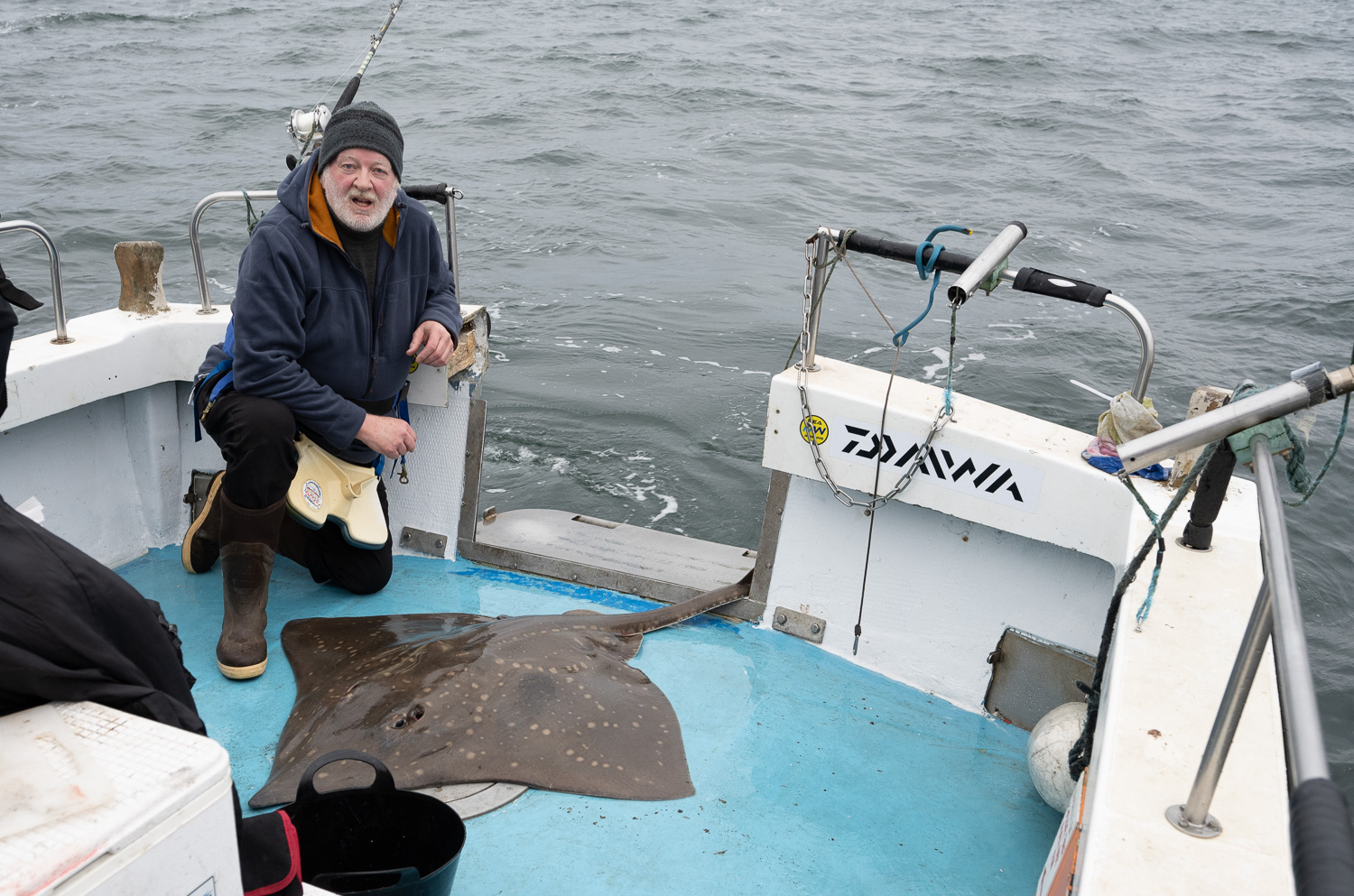 Leigh soon had the fish on the deck and after a tagging check and measure the 105lb female fish was returned to the sea.

There was a lull of around two hours as the tide died off and the boat swung into deeper water before Stewart hooked into the second fish of the day. 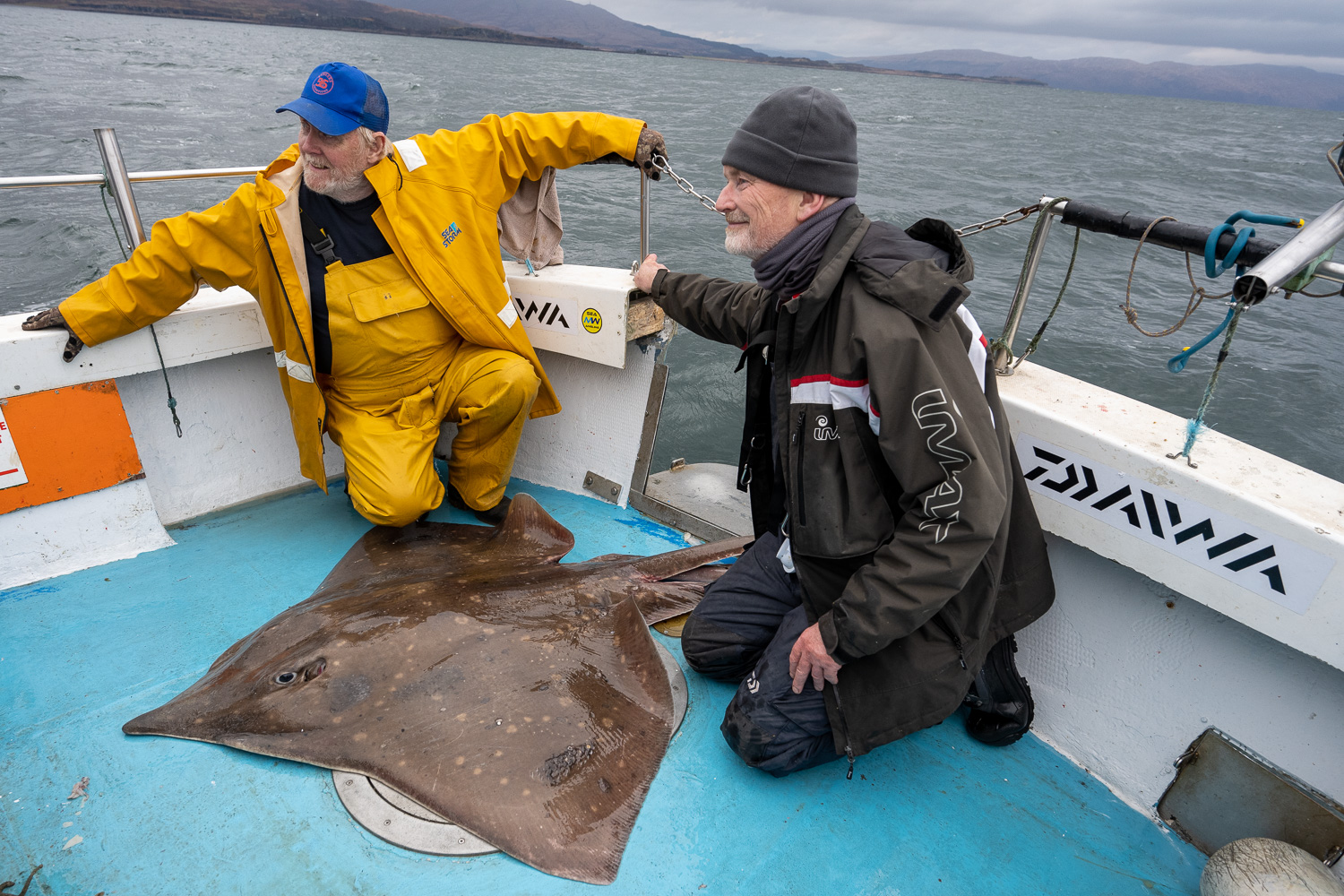 Stewart and Richard with their tag team skate

Unfortunately Stewart’s back gave in and he he had to tag team with his mate Richard who successfully boated a 129lb male skate after three quarters of an hour.

Biggest of The Day

Half an hour after the team fish was returned Scott hooked into his first fish of the trip and 10 minutes after this a second fish picked up a bait and Alistair was soon also into a fish. 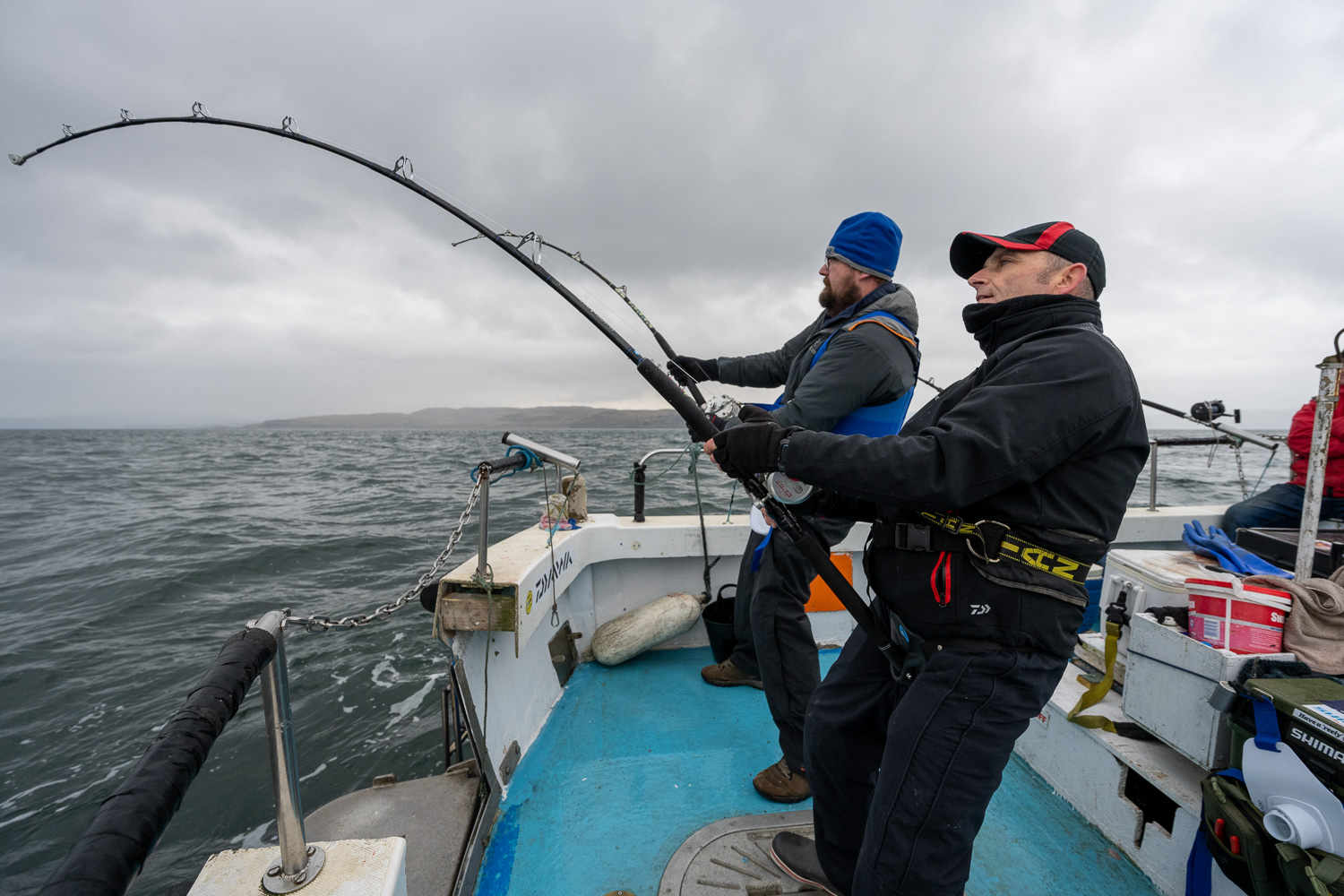 A double skate hook up

Scott’s fish was first on the deck and it measured out at a cracking 188lb, the biggest of the day. 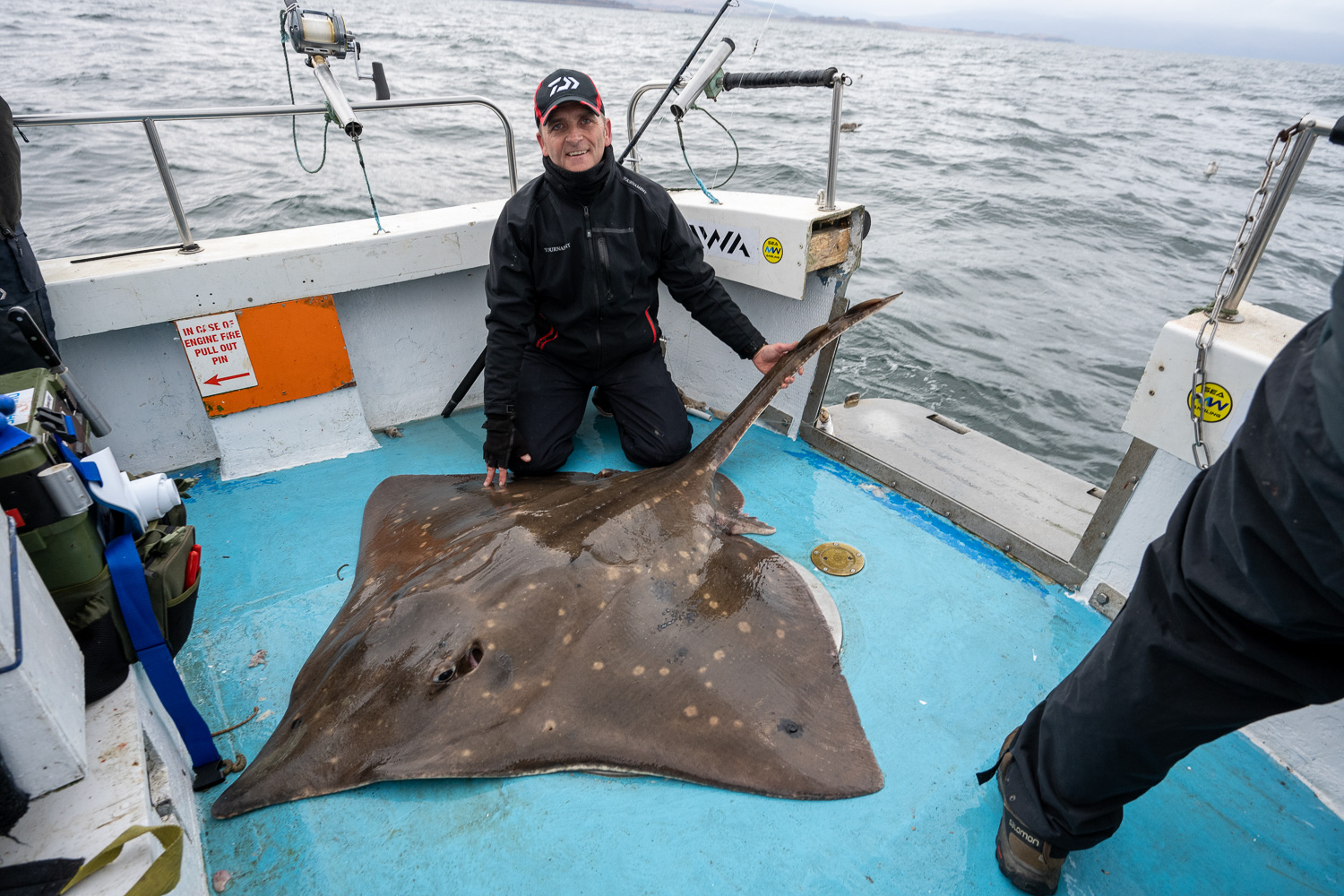 Scott with the biggest of the day

Alistair was elated when his female fish measured out at 118lb to give him his first ton-up skate. 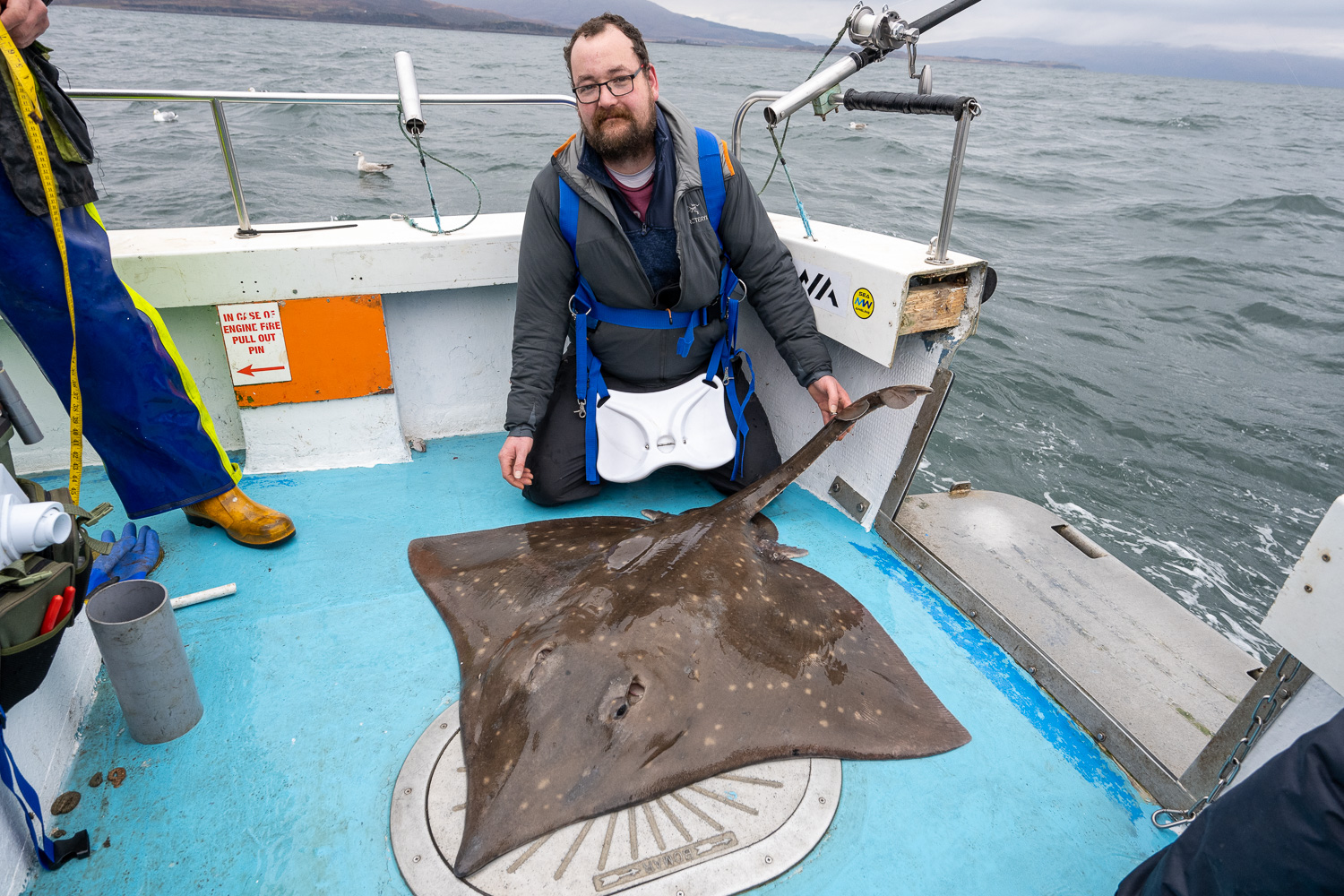 Alistair with his first ton-up skate

Around half past three Scott boated his second skate, a lovely 110lb male fish.

Just as Leigh started the engine to haul the anchor Richard had a take and landed his solo fish, again a male which this time measured out at 105lb.

All the fish today were in great condition and four out of the six landed had previously been captured and tagged. The remaining two fish were injected with the tiny electronic tags to add to the continuing research program where anglers contribute the vast majority of scientific data relating to growth and distribution of skate in Scottish waters. 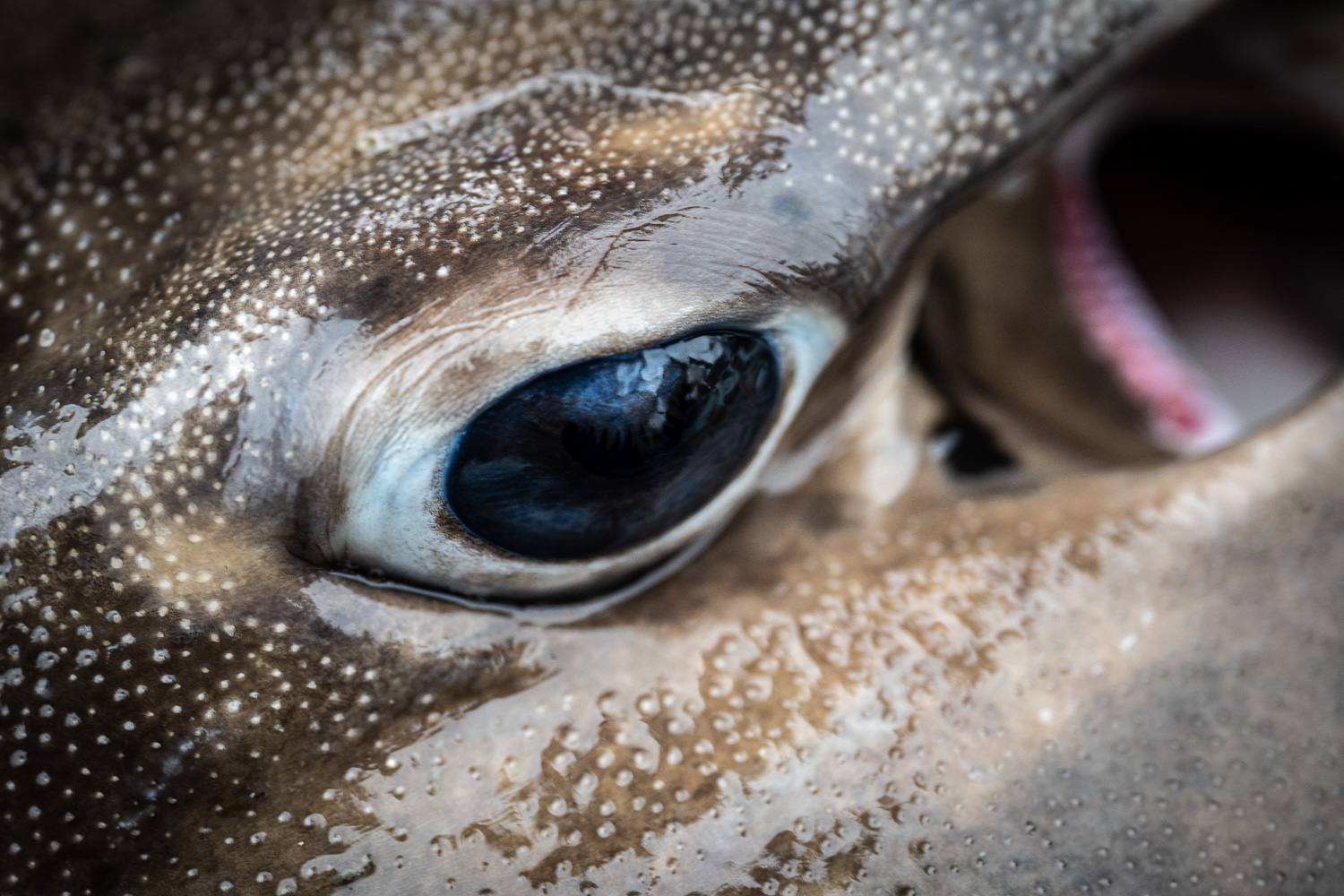 All in all a great first day out of the year, good company, craic and some rod bending fish to kick off 2022.

Laura Dawn II is well set up for skate and general fishing with all the gear aboard should the anglers not have their own heavy tackle. Leigh can be contacted via Facebook or by phone on 07548 684978.

Nathan on form at a moonlit Gorleston

hello. I want ask you about fishing trips. you going every day? because we come to Scotland for holiday 24 December to 2nd January. one day looking for fishing. we am 3 guys. thanks

Sorry been unwell and just noticed this. I do not run fishing trips I’m afraid.