Irish angler Cormac Burke was among the anglers from Europe and beyond who fished the week long European Boat and Line Class event on the south coast. Here, Cormac gives us a view of his personal daily diary of the week.

It was fantastic to see teams from 16 different countries coming to Weymouth for the EFSA five day competitions. Many of the teams came to Weymouth prior to the event giving much welcome work to the local charter fleet and other local businesses. Thank you to so many of our angling friends who travelled a long way (such as the South African team) to take part.

Little did the 120-odd anglers from 17 nations know when they gathered on the quayside at 7am this morning what the weather had in store for them.

The first two days of the event would see the anglers targetting the larger fish including, conger, ray and tope. 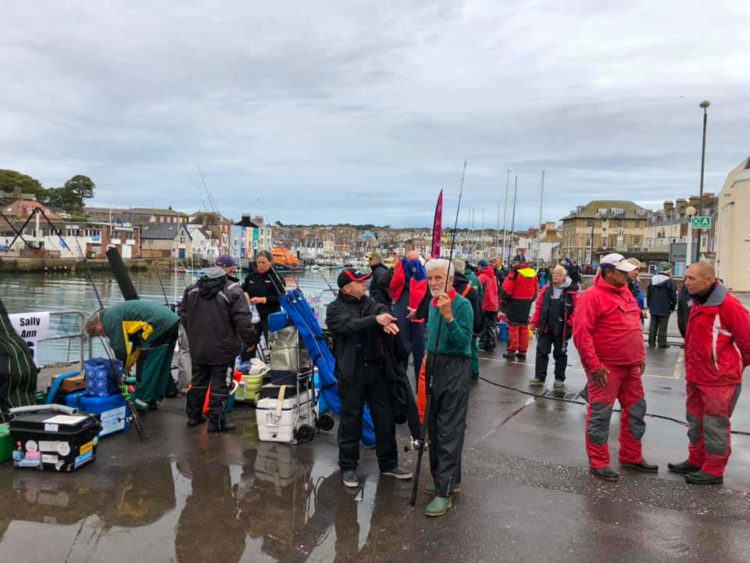 Anglers ready for the off on day one

What appeared like a relatively normal ‘fresh’ day soon transpired to be a very dirty swell, with boats at anchor suffering a corkscrew effect as wind and tide fought against each other for domination. Conditions were not helped by the almost non-stop lashing rain that pummelled the anglers all day long.

Unsurprising then to hear that, with conditions like this, fishing was generally poor with a dozen fish or so being the first place winner on many boats, and even less on some boats.

In such a ‘scratching match’, anglers welcomed the sight of tope, ray or huss, even if they were less points than the main target of congers.

Without official scores posted as yet, it’s hard to know if any nation has a commanding lead but out of Ireland’s 14-man squad, Irish anglers managed a first, three seconds and a third on their respective boats. 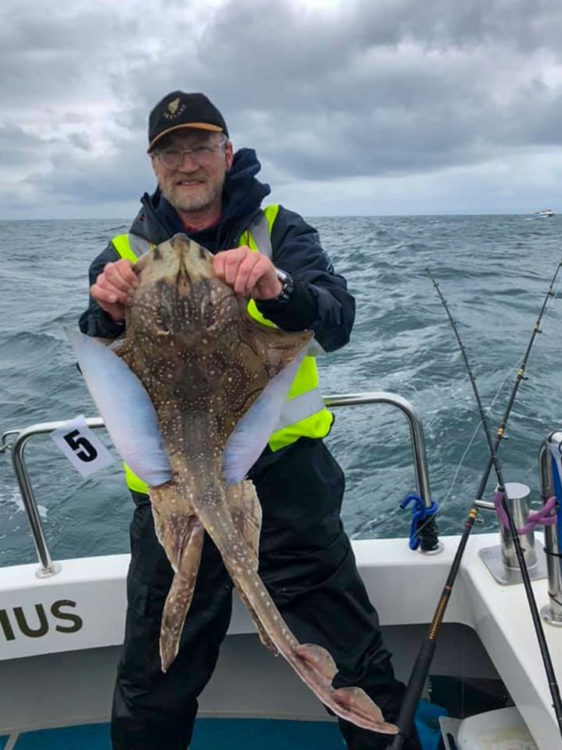 Roll on tomorrow when we’ll be on the same grounds targeting the same species but hopefully without the wind and rain.

Finally, my personal fish of the day was a lovely 14lb undulate ray. My third new species since arriving here.

“Well at least the rain has stopped today” was the general sentiment as the anglers shared a coffee on the quayside for the 7.15am start of day two of the Championships.

A fine morning with bright sunshine set everyone’s mood for the day but, although the weather was much improved from the day before, the fishing however, was not. 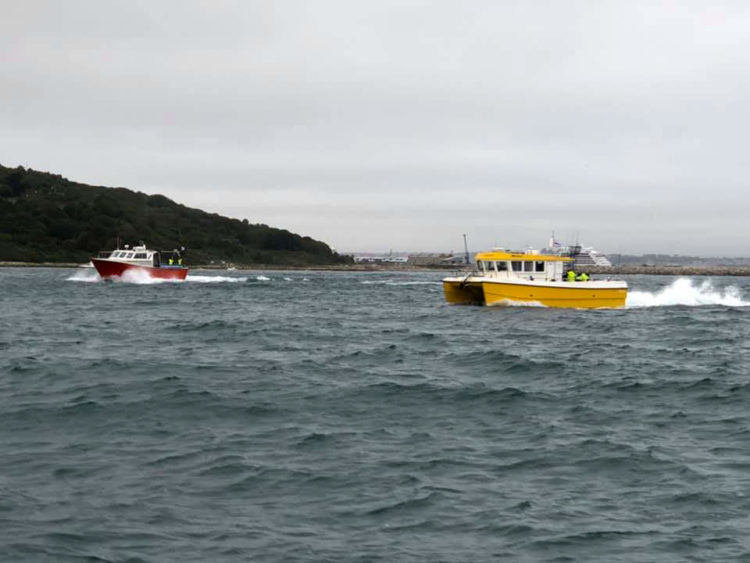 Another ‘scratching match’ with the average winner on each boat gaining their 100% scores with less than ten fish.

An indication of the poor and unpredictable nature of the conger, ray and huss fishing of the first two days is that only two anglers, Martin Hubert of Denmark and Katharina Schleiff from Germany are the only two people with 200% each scored after two day’s fishing – making them the individual leaders, with Martin ahead on points. 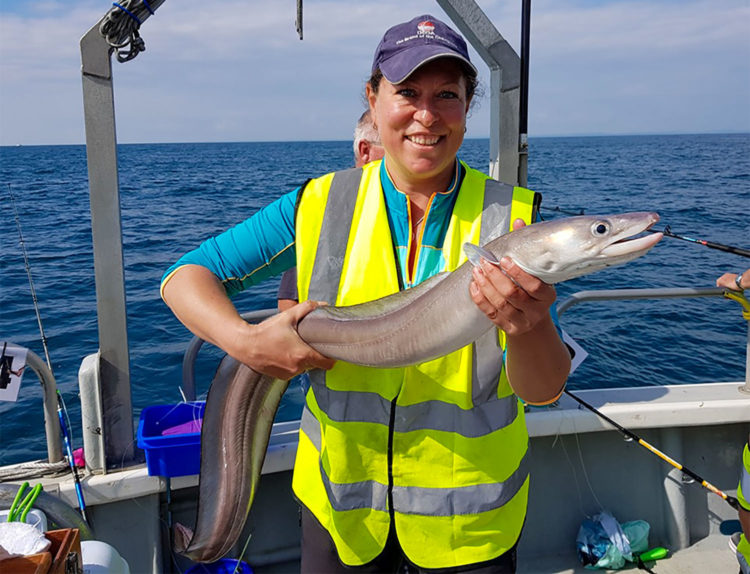 Katharina with a Weymouth inshore conger

Ireland’s Pat Wright is battling well in fifth place overall in this individual category and he is also in fifth place, along with myself, in the Two-Man Open team category.

Norway (A) are leading a chasing pack in the International teams section followed closely by the Scotland (A) and, lying third, the Irish (B) team of Warren Doyle, Christopher Cloak, Peter McCartin, Pat Wright and Heiko Dreier.

The Open Four-Man team category is being lead by a mixed team of three Norwegians and Irish angler Heiko Dreier with two Irish teams in this section sitting in 9th & 11th places.

With the light line class now over, tomorrow starts the greatly anticipated general fishing where Weymouth will get its chance to show off the great variety of species known to reside in this region Lets just hope that the forecasted strong SW wind doesn’t spoil what should be a good day’s fishing for everyone.

First Day of The Boat Championships

For the next three day each angler would be permitted to score ten of each species. The first five would score the fish points with the remainder score a point a piece.

The normally mild Weymouth climate certainly bared it’s teeth today as the boats battled to make it out to sea in a very dirty swell with strong SW gales. Many vessels were forced back in to the shallow and sheltered grounds near Portland which meant that wrasse and pollack were the main targets. 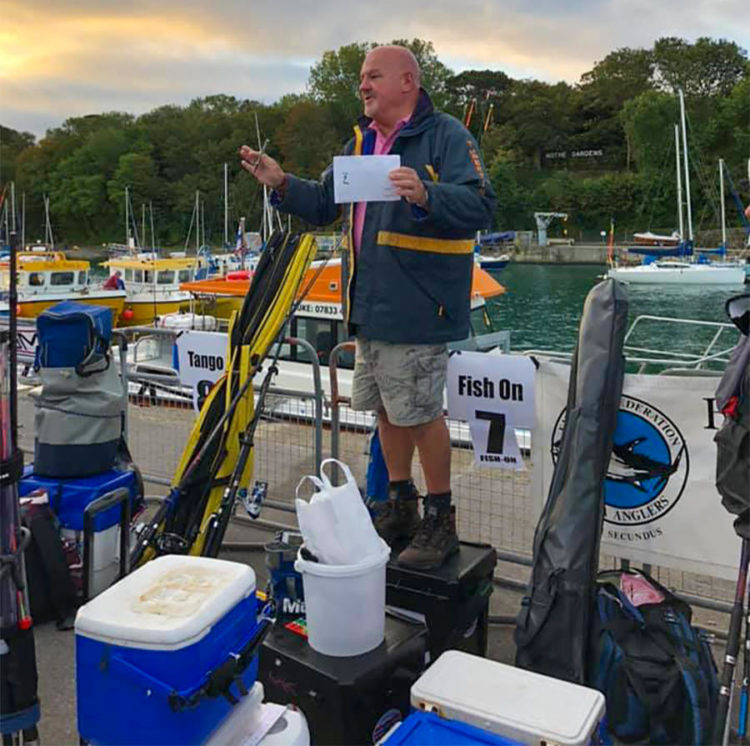 With many wrasse too small to make the 20cm minimum size there was little option in the second half of the day other than to anchor up on Inshore cleaner grounds where small smoothhounds and red gurnards at least provided a bit of action for the weather-beaten anglers.

With the day three results comes the news that Germany’s Katharina Schleiff is, at this point, the sole contender for maximum points as she is the only angler with three boat wins and a 300% score after three days’ fishing.

In the international team section Norway (A) still leads Scotland (A) with, in third place, England (B) who have relegated the Irish (B) team back to fifth place.

All still to play for in these categories and, with a very slight improvement in the weather expected for tomorrow, many anglers will be aiming to make their mark before the final day on Friday. 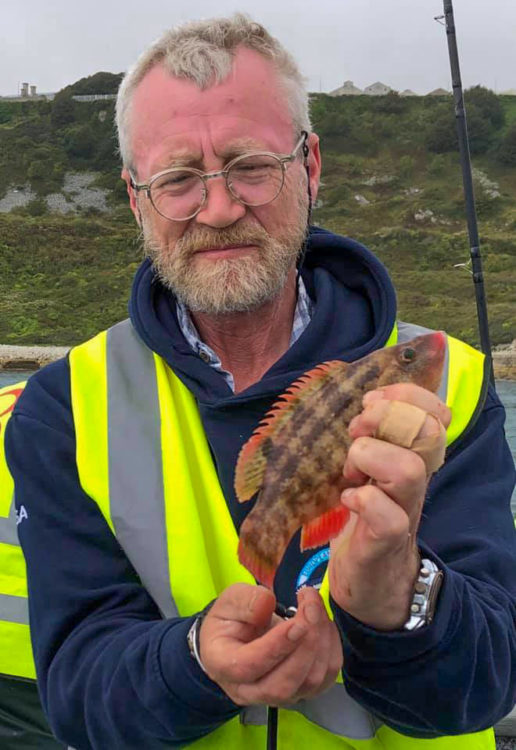 The author with a Ballion’s wrasse

My own ‘fish of the day’ is another new species for me – a Ballion’s wrasse. But this was deservedly upstaged by Irish Team Angler Peter McCartin’s lovely John Dory.

However, the Dedicated Angler prize has to go to my crew-mate today, England’s Peter Neale who bravely fished on when his pants decided to head south.

With many anglers physically weary after getting knocked about at sea for the past three days, they could be forgiven for losing a little of the exciting eagerness that they had earlier in the week when gathering at the departure point this morning.

But, as promised by the forecasters, although today was still a bit ‘lumpy’ at sea, it was a marked improvement on the three previous days. 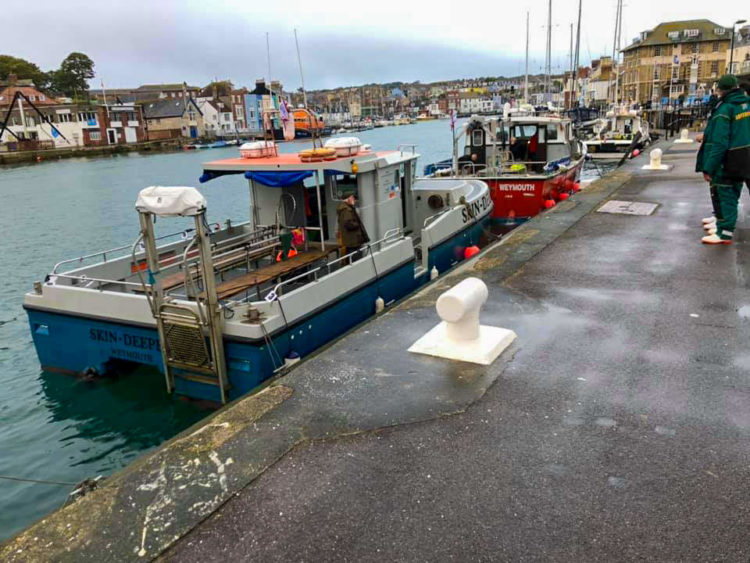 Waiting for the anglers on Thursday

And indeed, the fishing also showed a noticeable improvement with anglers pleasantly surprised at catching more in the first hour today than they had caught for a full day in the first three days of this week.

There is high excitement, particularly among the German squad, as Katharina Schleiff has again today scored a maximum 100% and sits now with 400% from four days. Any kind of a high score tomorrow should see her crowned champion, but if she fails to do so, previous leader Martin Hubert from Denmark sits close by with 384.56%, just a half a percent ahead of Scotland’s Steve Souter.

In the international team category, Norway have a commanding lead but silver and bronze positions are still up for grabs with just a small percentage difference between Scotland (A), England (B), Netherlands (A) and Ireland (B). 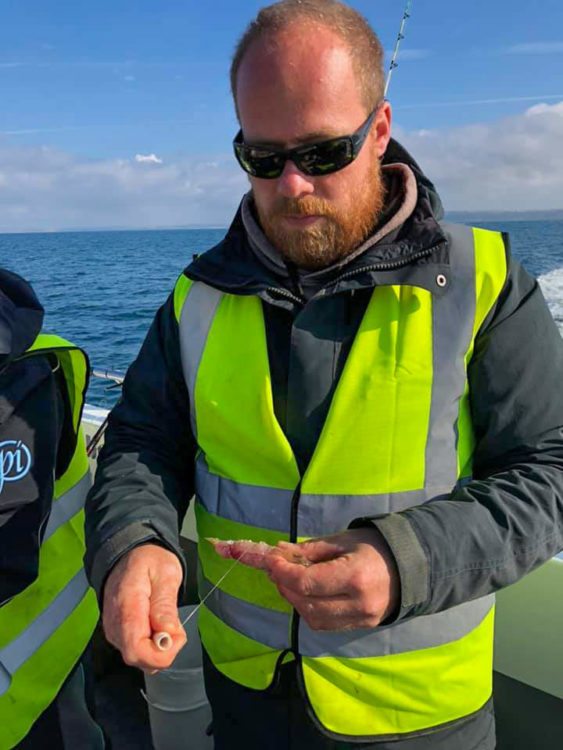 The Seniors section is going well for Ireland’s Warren Doyle who currently holds the lead going into the last day which, we are told, will be calm and sunny, something that the competitors will welcome as it should greatly increase the access to black bream and garfish.

Although personally I didn’t score great today (approx 50%), my fish of the day was a fine 33cm cuckoo wrasse.

For the first time this week, the 6am risers of the international EFSA community were greeted with the sight of flags lying slack and, for a change, not fluttering wildly in a strong breeze.

Although it’s likely that the anglers’ aching bones were glad that this week’s test of endurance was coming to an end, the mood this morning was tainted with a little sadness that this fantastic competition was drawing to a close.

But glorious sunshine and calm seas gave everyone a real taste of Weymouth – and the fishing didn’t disappoint either – it’s highly likely that today produced the largest volume of fish caught than any other day this week. 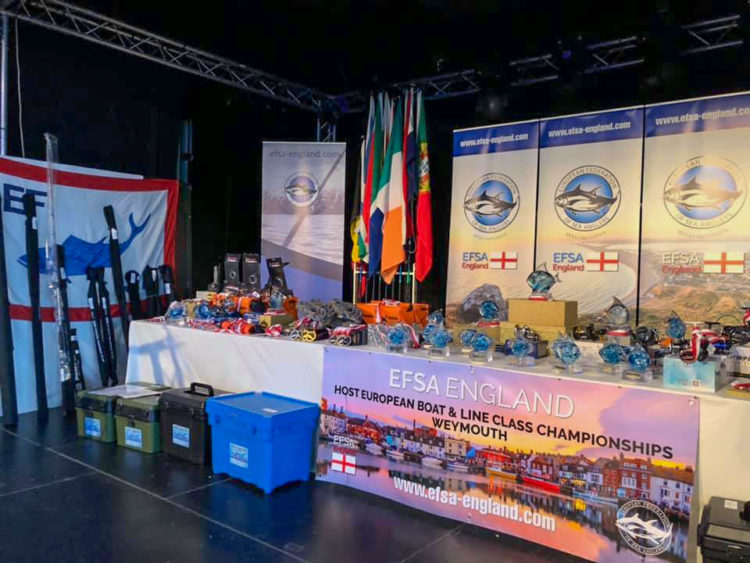 No official scores to report at this time as all will be revealed at tonight’s gala dinner and prize-giving ceremony but, rumours are that there might be some surprises in store due to today’s scores.

Finally, the fish of my day was a nice black bream – one of the ten I caught in filling my quota today.

The bad weather, the lost fish, the broken traces and all of the cuts and bruises from this past five days of fishing were put behind us tonight as the 118 anglers sat down to a sumptuous meal and the 2019 EFSA Championships prize giving ceremony.

To list the entire group of prizewinners would take hours, and so the main focus is on the top categories. A link to the full final scores will be published here when available. 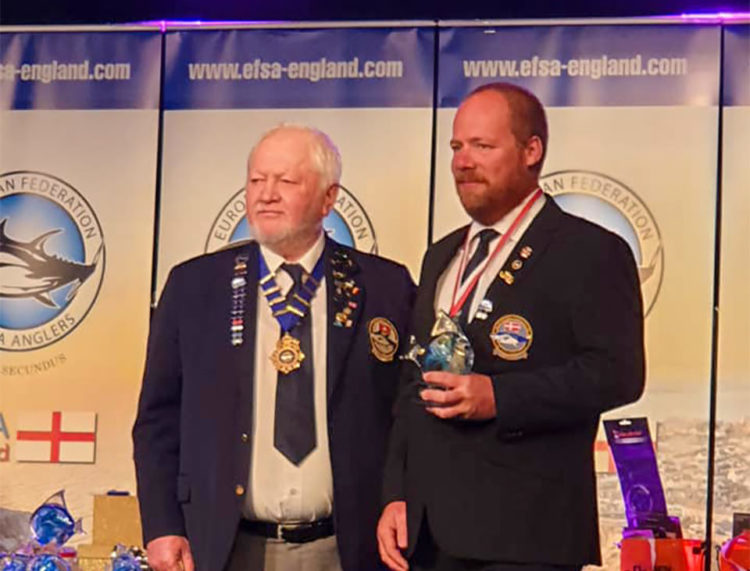 The first question was if German angler Katharina Schleiff could repeat the highly difficult task of scoring 100% for a fifth consecutive day. The answer was ‘no’ as she battled bravely to gain a 66% score, leaving the door ajar for Denmark’s Martin Hubert to sweep ahead with his 100% score from today and take the gold medal. Martin was closely followed by Scotland’s Steve Souter who won silver and leaving Katharina in a very credible bronze position.

With the International Team category almost a foregone conclusion due to Norway’s huge lead, the silver and bronze medal positions involved four nations, Scotland, Ireland, England and Netherlands, with less than 50pts between them. Scotland (B) took the silver and England (B) awarded bronze. 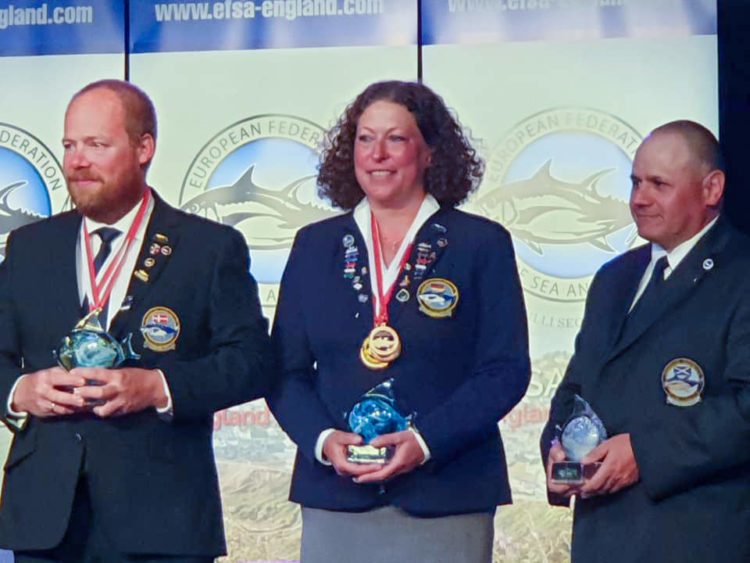 While there were several Irish winners in the overall placings, including Pat Wright and Heiko Dreier, the highlight was Warren Doyle taking the gold medal in the Seniors’ section and following on from his silver medal in this event in Iceland last year.

But, winners or losers, the sense of comradeship amongst the EFSA anglers from so many different nations – not just tonight but throughout the whole week – makes this a genuinely unique organisation in that it contains some of the world’s top anglers but the close bond between all of the competitors makes the EFSA Championships an event like no other – roll on the 2020 Championships in Denmark where the Danish EFSA hosts will have a hard task in reaching the high standard of organisation set this year by Neil Bryant and his EFSA England team. 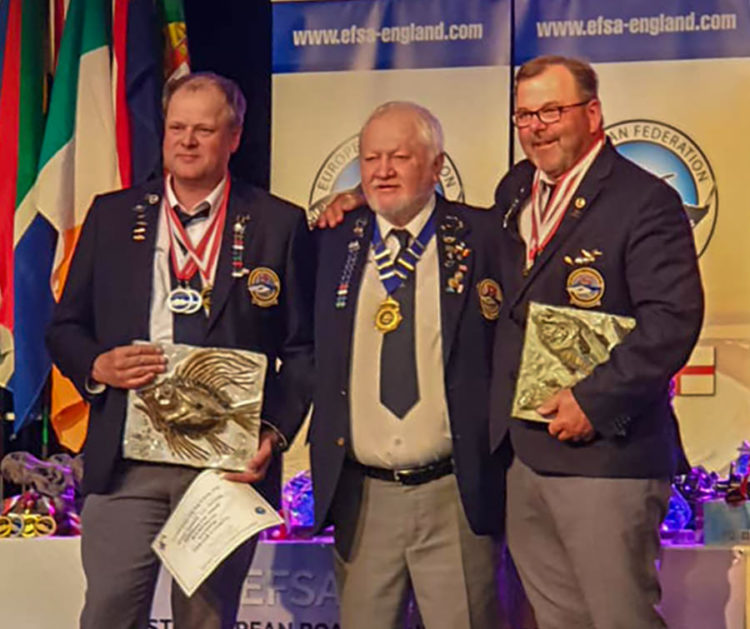 And finally, in his closing address tonight EFSA President Horst Schneider announced that my appointment as EFSA Assistant Secretary has been ratified by EFSA HQ – this is a great honour for me and it’s a role I’m very much looking forward to full filling. 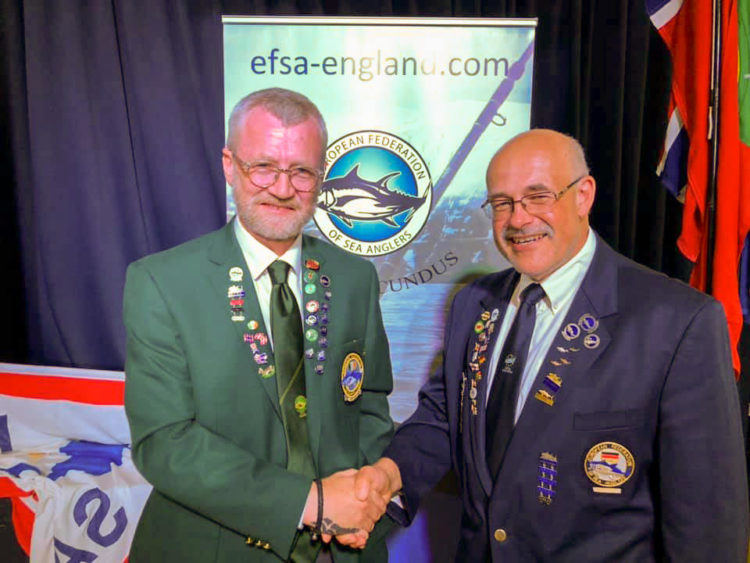