Very few Scottish charter boats will drop the anchor preferring to spend the day drifting over marks. Local anglers have developed techniques to target species which are more commonly fished using uptide and down tide methods at anchor including drift fishing for rays.

The majority of boat anglers north of the Border spend their days drift fishing while targeting cod and pollack over hard ground or haddock and whiting on clean ground marks. However, some boats have adapted their schedules to dedicate time to drift fishing for rays. 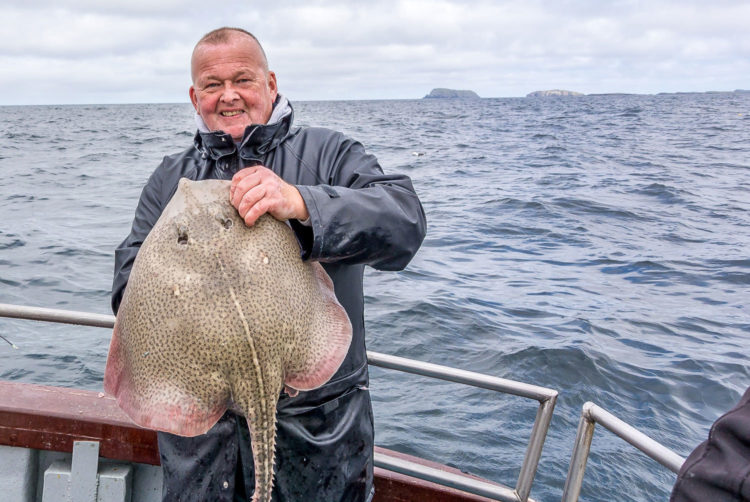 Initially, drift fishing for rays came about when boats had to seek shelter in the sea lochs, bays and inshore waters both on the mainland and in the islands. Stuck with the choice of abandoning a day at sea or sheltering under adjacent cliffs and hills the adaptable anglers opted to try for species other than the normal inshore smaller fish.

Small boat anglers as well as their charter boat based brethren were quick to pick up on an unusual method of providing a day’s sport. Those used to fishing for rays when the boat is traditionally at anchor are surprised at just how effective drift fishing for rays can be. The top angler in this year’s Highlands & Islands Open event, fished off the west coast of Lewis had over 30 rays for his day. 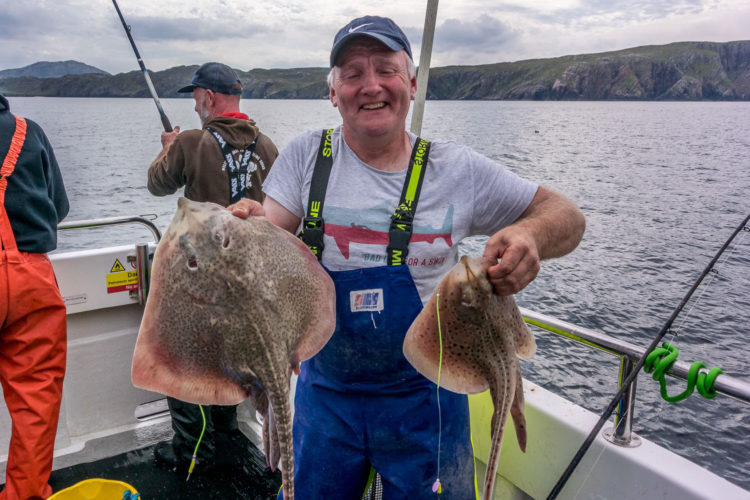 Unlike anchoring, the anglers are not restricted to targeting the rays that surround the fixed boat or waiting for the fish to move onto the mark.

By drifting a good skipper can constantly change the drift area until the fish at located or move to the next mark if the fishing dies off without the labour of raising the anchor.

Obviously the first step in drifting fishing for rays is to establish if there are rays in the area. Local knowledge, either from anglers or from the charter boat skipper is important initially. Charts can also provide a good guide when sussing out clean ground formed from sand, mud and gravel or a mix of the three that provides a seabed frequented by rays. I have found a few ray marks of the north Scottish coast by picking a day with little wind and a slow drift and simply letting the boat drift of a few miles while marking the spots that produce rays for future trips. The Scottish rays do not seem to like feeding when the sea has stirred up the particles on the seabed so picking a day after a settled period is most advantageous. 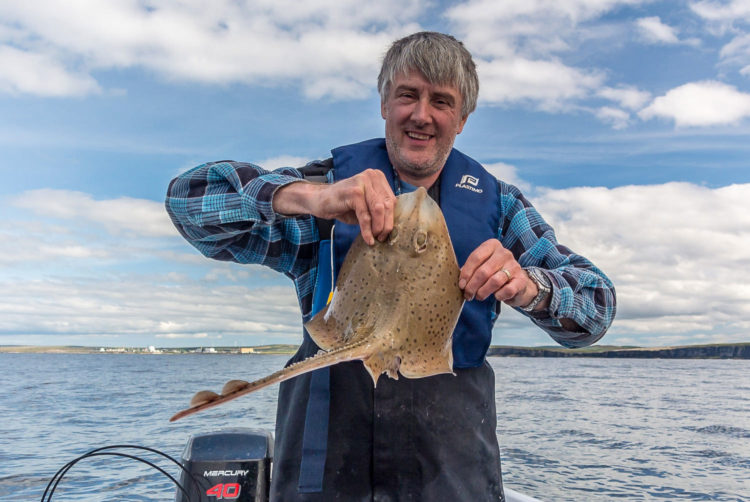 One disadvantage of hunting rays on the drift is that you are limited to times when the drift is slow, particularly on charter boats. Attempting to drift with baits dragging along the seabed while eight or nine other anglers are also using the same method can be a tangle fest if the drift is fast. A couple of anglers on a small boat have a bit more leeway as regards to the speed of the drift with fewer rods in the water and using a sea anchor or drogue can help slow the drift. Drifting for the rays is generally most effective when the drift speed is below one knot.

No matter what the speed of drift a successful day aboard a charter boats requires the cooperation of all the anglers on board to avoid a constant succession of tangles. It is important that those anglers fishing away from the boat use lighter lead weights than those fishing under the keel. A good guide is that those on the down drift side should be using 8 to 12oz while the anglers suffering under the boat need to be using a pound to a pound and a half in weight. 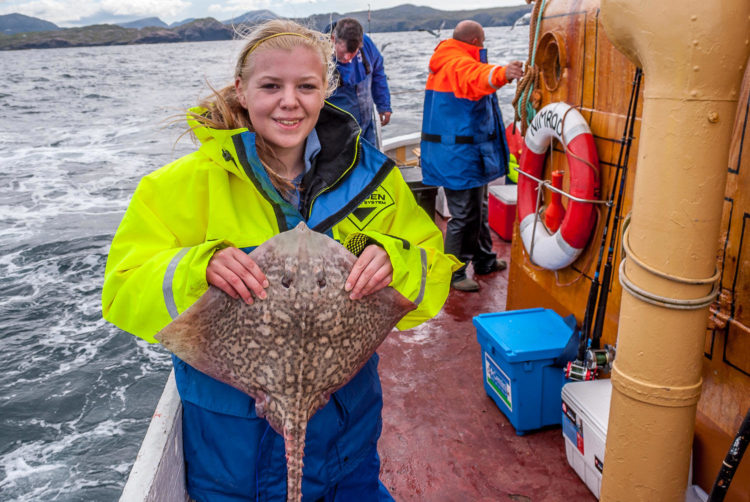 Helen with a thornback

The anglers that have the drift can free spool and allow the baits to fish well away from the boat. It is generally good etiquette not to fish with a long line out when fishing under the boat.

There will still, inevitably be tangles as the drift progresses as anglers around the boat will hopefully be winding in fish or just checking baits. Paying attention to surrounding angler’s lines when dropping back down can assist in minimising tangles.

Ray Species On The Drift

The two main target species when drift fishing for rays are thornbacks and spotted rays. They generally frequent the same seabed although spotted ray are less likely to be found over muddy seabed preferring clean sand.

I have also seen blonde and the rare cuckoo ray landed while drifting. The occasional common skate have also picked up a bait but these tend to straighten the hooks before being brought to the boat. 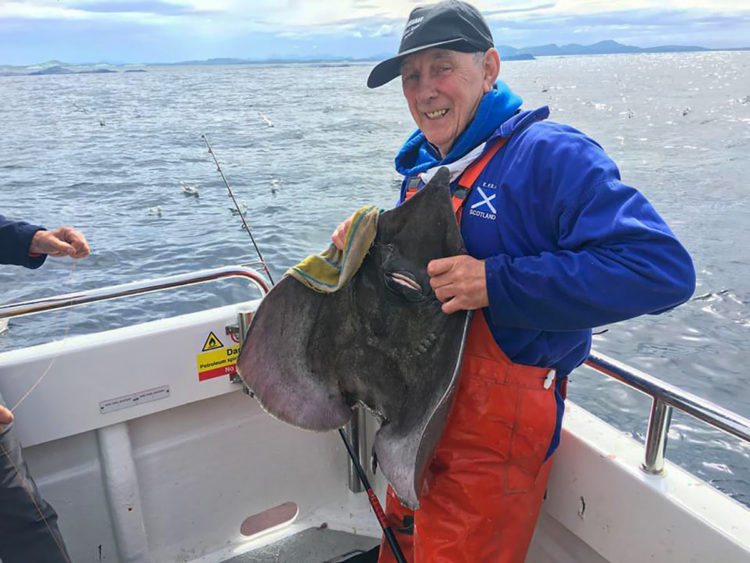 A small common skate taken on the drift

The spotted rays are particularly aggressive when taking a moving bait and their bites are normally far more violent than their size suggests. Thornbacks tend to be more sedate in their take and releasing four of five metres of line after the initial knock can produce more hookups. By free spooling after the first bite it is also possible to connect with a second or even third fish.

Fortunately the season for rays in the north coincides with the arrival of the summer mackerel shoals. It is usually possible to catch all the bait required for a day drift fishing for rays while heading out to the ray marks. However, the mackerel can be scarce at times and it is always worthwhile carrying some frozen fillets to proved cover on the trip should the mackerel prove elusive.

Large baits are not required and strips of mackerel, herring or bluey one centimetre wide and seven to eight centimetres long are effective. 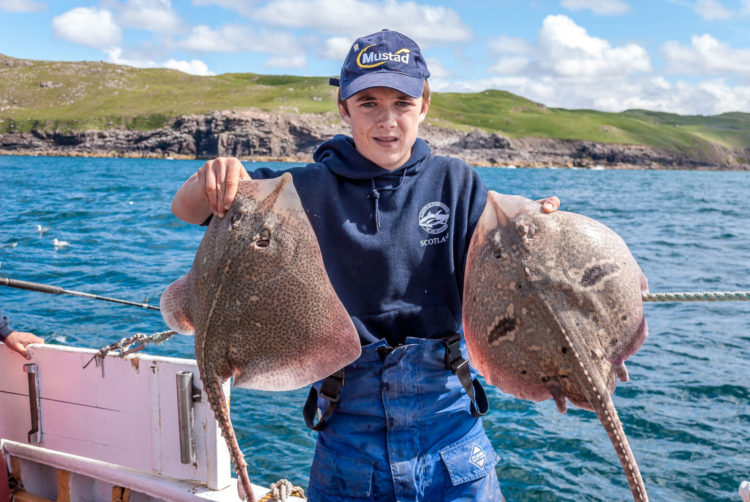 Josh with a thornback double

While fish baits are the most productive squid can also produce, particularly thornbacks, while also resisting the attentions of the rapacious dabs and gurnards which inhabit the same grounds as the rays.

The actual make and model of rod used is not important other than is should be capable of handling the weights that will be required. Longer rods, around three metres, allow longer traces to be used effectively. Extra long telescopic match style rods are not recommended particularly when it is the angler’s turn to fish under the boat.

Any medium capacity multiplier reel loaded with braid is suitable. I use the two speed Penn Fathom 25 which with its narrow spool is ideal for braided lines and allows me to drop into lower gear when being lazy. 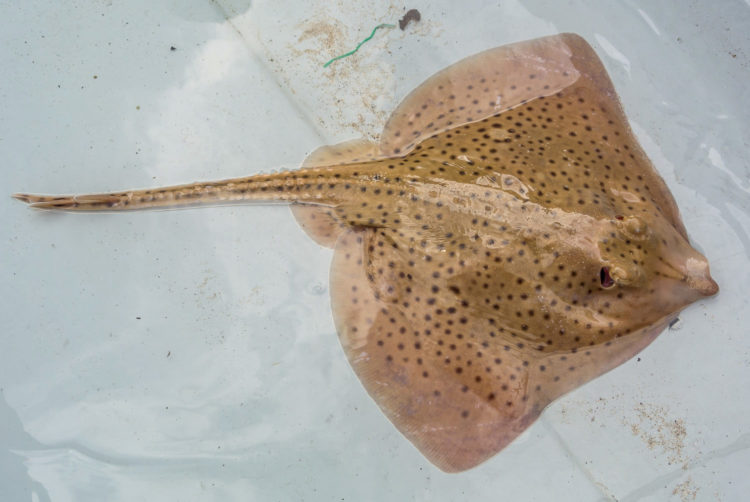 A female spotted ray on the drift

Fixed spool reels, unless bait runners, do not have the control necessary to allow the tackle to be free spooled under moderate tension.

Terminal tackle for drift fishing for rays is simple with a tubing boom attached to the leader and a hook trace suspended below. The pleasure angler may just fish with a single hook whereas the angler fishing a match will tend to use three hooks. 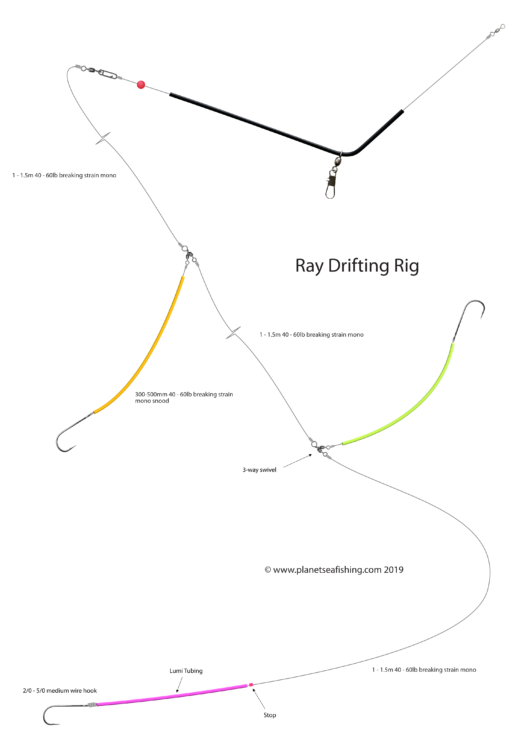 Fishing with more than one hooks allows for a selection of baits to be used. The additional hooks will also present a working bait longer if nuisance fish are around and give the opportunity of multiple hookups.

Give It A Go

The technique may seem outlandish if you are used to fishing at anchor for ray species but if you have an open minded skipper or your own boat it is worth giving drift fishing for rays a try. Nothing to lose and no anchor warp to haul. 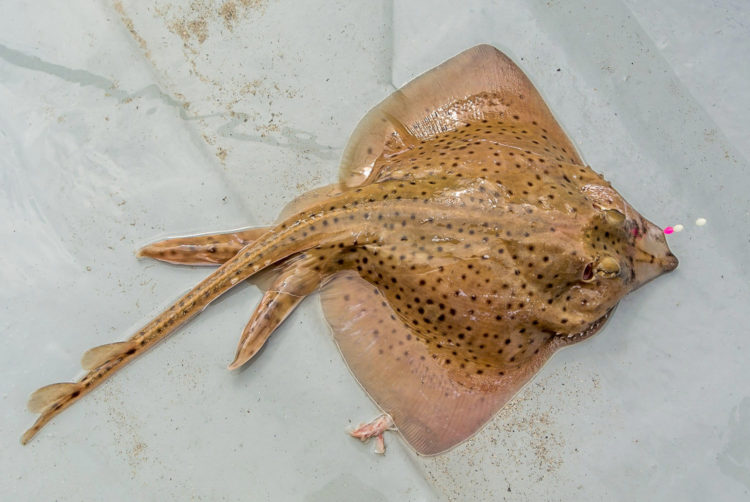 A small boat male spotted ray on the drift

The Stornoway Sea Angling Club have their own boat, skippered by Robbie Bell, and if you fancy a trip to specifically fish for rays on the drift they can be contacted through their Facebook page.