There is now a staggering amount of choice in compact multi-section travel rods, but quality varies enormously. Des Westmore has fished with numerous examples and now turns his attention to the Shakespeare 20/30 Ugly Stik travel boat rod.

Shakespeare introduced the Ugly Stik range of rods way back in 1976, billing them as ‘unbreakable’. These original Ugly Stiks introduced the ‘Howald’ process to the angling world, or so many people would think. The Howald process of 1976 actually refers to a patented proce

dure that more or less builds rods twice; the basis being a spiral-wrapped carbon core with longitudinally laid E-Glass fibres over the top. The inner build provided rod strength and ‘backbone’, with the outer glass layer providing superior durability. Well that was the process of 1976,

but the Howald name goes back a lot further. In 1947 while working with Henry Shakespeare, Dr Arthur M. Howald created the ‘Howald Glastik Wonderod’, the world’s first fibreglass fishing rod. This bait-casting rod sold for $60, at a time when bamboo rods cost $15. 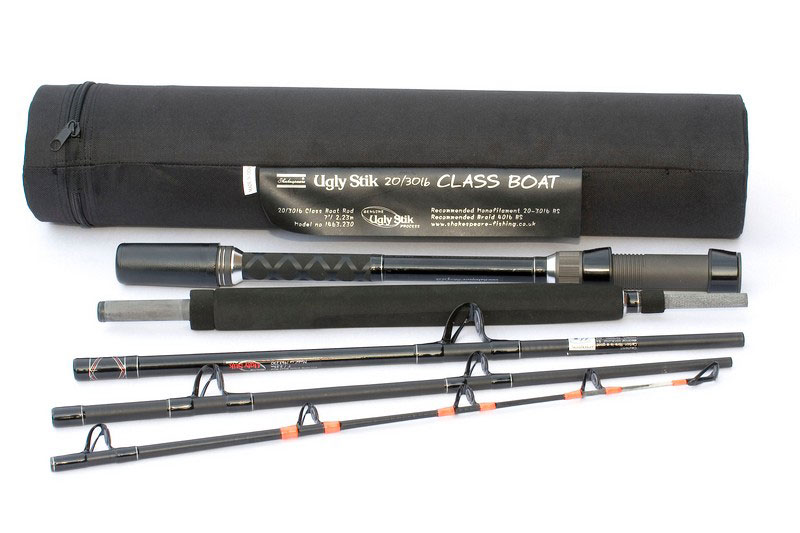 Since then, various Ugly Stik adverts have carried various near indestructible claims. Checking the latest Shakespeare catalogue this most recent Ugly Stik incarnation is said to be a mere ‘35% stronger than standard rods’. But come whatever ‘Uglies’ have been around a long time and proved themselves to be very, tough, extremely durable and all excellent fishing rods with a huge angler following worldwide. The latest Ugly Stiks retain the classic transparent tip are formed of the Howald process which has been further refined, incorporating three distinct construction layers. These layers are the tip section, which has a spiral core of high strength fibreglass and/or carbon. A spiral woven coat of fibre-glass/high carbon tape with carbon fibres running up the blank comes next. And finally, the butt is made in a traditional rolled manner to give a faster modern action.

Over the years, I have found various progressive versions of the Ugly Stik rods to be inconsistent in performance terms – some were great rods worthy of the lauded name, while others were complete lemons that frankly did nothing for such a well-regarded brand. I held to these thoughts as my attention now turned to the latest Ugly that I had for testing.

Have rod will travel

The focus of this review is the 20/30lb class 5-piece ‘Ugly Stik Travel Rod’ that is styled to match the wider ‘Ugly Stik Braid’ range. The assembled length is 7 feet (2.1 metres), with a compact pack-down length of around 19 inches (0.48 m) in the bag provided, or alternatively down to 22 inches (0.56m) in the protective tube.

A distinctive handle caries a heavy-duty gimble with removable cover. The reel seat the handle area is a real ‘bare-bones’ build affair, with the only comfort concession being a short piece of diamond hatched shrink tube fitted immediately above the gimble. The rest of the lower handle is just plain, gloss finish, carbon. A genuine Fuji DPS 24 reel seat is fitted the right way round, with the upper end incorporating the first joint. 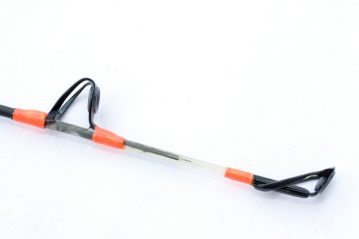 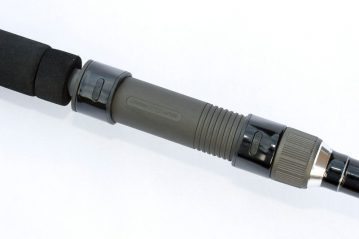 Section two sports an EVA fore-grip flattened on the upper and lower surfaces to help prevent the rod rotating in your hand under load. A male spigot is fitted at both ends and a pleasant touch is both incorporate a piece of tubular EVA to help disguise the reduction in rod blank diameter that is visible on a spigot joint. If the spigot naturally wears in time, this piece of tube can be cut back.

Seven heavily braced Aluminium Oxide lined Fuji BLRLG rings, ranging from 20mm down to 10mm plus the tip ring, are fitted. Whippings are black tipped with silver apart from the final three plus the tip, which are fluorescent orange to aid visibility. The high-build finish on the whippings looks good and the blank is black with a matt finish, apart from the transparent portion between the last ring and the tip. Shakespeare describe the rod as having a semi-fast taper with a progressive tip and stiff butt and lower mid section. In addition to the carrying tube, neoprene rod bands, a cleaning cloth and a rod bag are provided. 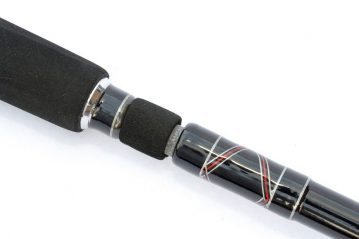 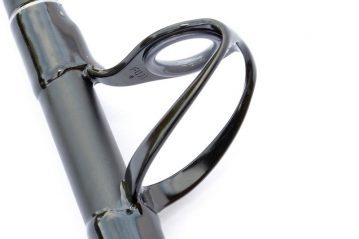 I like to get as many people as possible involved in a rod test and this occasion was no different with a boat full of anglers all eager to have a go with the new rod. However the Ugly Stik was not an instant with the testers, all of whom are experienced boat anglers used to handling a wide selection of tackle. All liked the foregrip, but everyone also bemoaned the lack of a grip behind the reel seat. To a man the rod was adjudged too stiff for its 20-30lb rating and far more akin to a 30-50lb. The chunky guides were also thought to be more synonymous with a 30-50 rod. It could be that these particular guides were chosen for their robustness on grounds that they will be more resistant to crushing in transit, but I am with the testers on this. The rod really does feel and balance more like a 30-50. 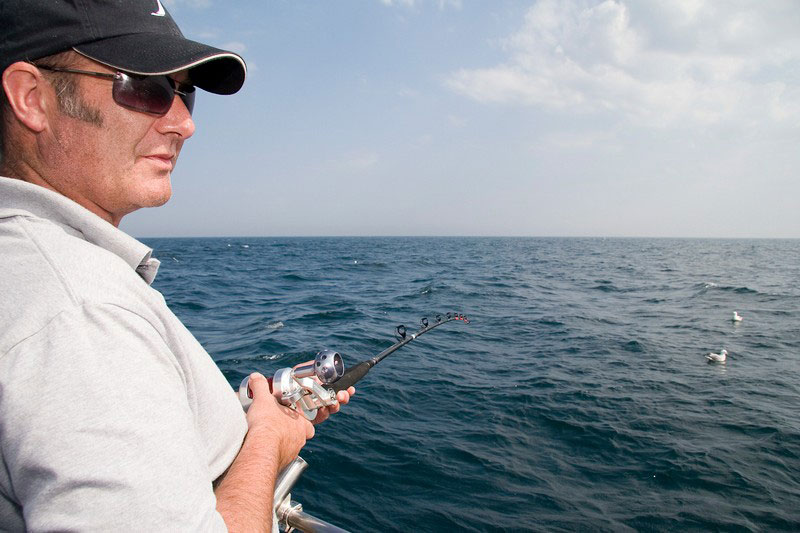 The Ugly Stik travel rod is a stand-alone item only available as the 20-30lb rating, I can’t therefore provide a like-for-like comparison with anything another version. This is not a soulful, sporting rod, but rather a stiff natured brute suited pirking and heavyweight bottom according to the testers.

Brian Gourley used the Ugly Stik travel boat rod for drifting with dead baits for ling over rough ground. He liked the finish but said the Ugly Stik lacked the sensitivity for effective drift fishing. The action was overkill even for the rough ground and mainstay of double figure ling that were coming aboard.

Rather than just dismiss the rod as too hard-core heavy for everything in the mainstream, I gave it to Ross Wilkinson at Navimo UK who was August cod fishing in Norway. Ross used heavy pirks with10/0 trebles and successfully boated lots of cod up to 35lb. Regular texts and pictures stoked my jealousy but kept me updated as to how the rod handled this more manly fishing situation. All seemed to be going very well until I received an apologetic text telling how the rod had burst during a tussle with a big fish. 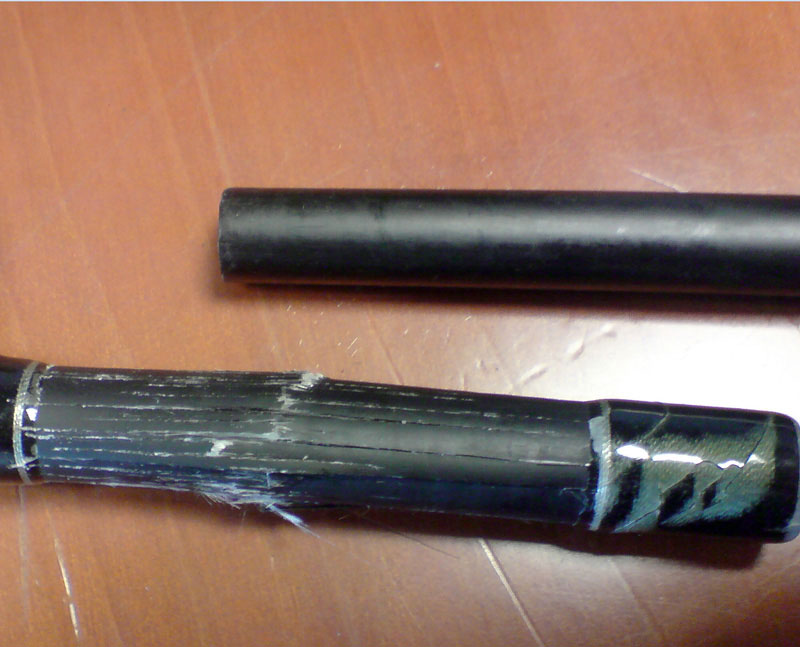 The point of breakage was at the overlapping joint of the third to fourth sections, where the lower section had burst out through the wall of the upper section. Reasons for the failure could be several fold but this certainly wasn’t an example of rod abuse of indeed fishing extremes by the angler using it. The flaw, whether it is unique to this test sample or more widely apparent, lies with the actual rod. My Post Mortem of the breakage leads me to think either insufficient cure cycle pressure may have caused a lack of carbon fibres consolidation, or perhaps resin starvation might be underlying. If it was neither of these things, then the design needs to re-examined. 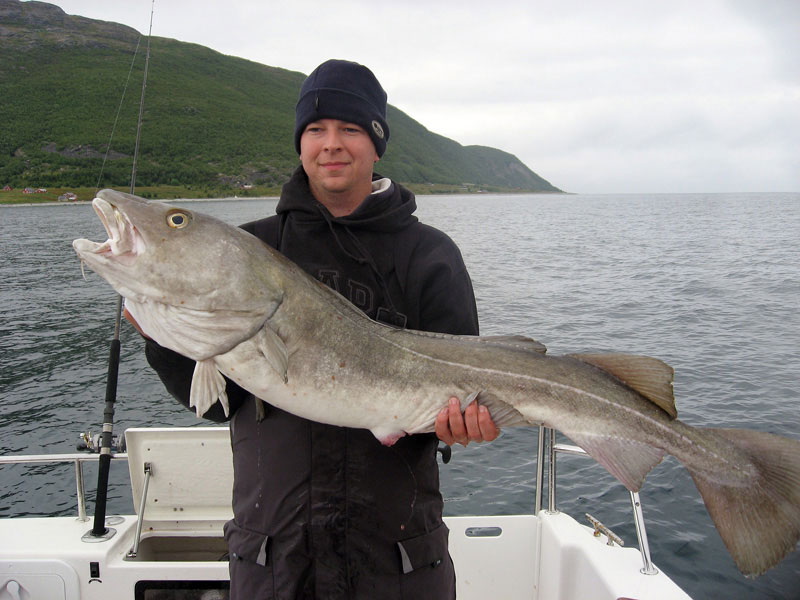 Ross noted the mid-section stayed quite straight when loaded, and this appeared to be putting excessive load directly into that joint. I took the rod to Shakepeare’s trade show and it was immediately replace. Discussions identified that this particular rod may have come from a problematic early production batch. I have since used the replacement rod a couple of times without any issue. The real test however will come when I can again put it up against some of the big fish in Norwegian or Icelandic waters – I will let you know what happens. Credit to Shakespeare who didn’t try and play down the problem and took onboard all the points raised in this review.

The catalogue RRP for this rod is £105.00, which very fair price given the fittings and build quality. Unless the action sounds like exactly what you are looking for, I would advise having a good hard look at this rod in the shop first rather than doing the Russian roulette thing and ordering right off the Internet without taking a breath. With the Ugly Stik’s proud heritage, I am hopeful that the breakage was down to a manufacturing fault, which, in all honesty can happen to even the best of blanks.

I work in the aerospace industry and it is for reason such as this that we test composite airframe structures so intensively. To find out more about the Ugly Stik range or locate a dealer near you or contact Shakespeare phone 01527 513308