Steven Morrison has landed a potential record-busting shore caught common skate from West Loch Tarbet pier on the Isle of Harris. Weighing an estimated 225lb, the fish, if ratified, will smash the existing record by more than 20lb! Here’s Steven’s story…

For the past couple of years Tarbet, Isle of Harris locals Geoff Peterson and Steven Morrison have ventured down to West Loch Tarbet Pier to target the massive common skate which lurk in the shallows after dark. The lads have had varying degrees of success: Geoff has had fish over 174lb, but up until last Thursday Steven’s best fish was this monster! (above) 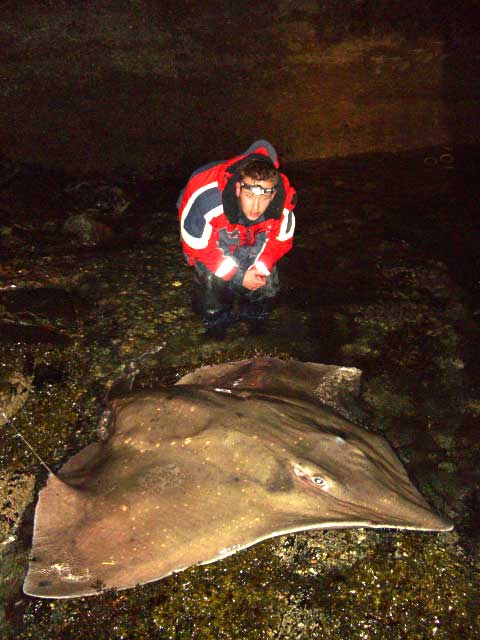 Setting up as normal at the end of the pier, Steven rigged his Abu Suveran SX and Penn 535 Mag reel with the standard terminal rig used in the Islands; consisting of 5 feet of nylon covered wire with a 400lb swivel crimped to the leader end and 10/0 and 12/0 bronze Mustad O’Shaugnessy secured in pennel fashion. A 100gm barrel lead is slid onto the trace before assembly to nail the bait to the seabed.

Steven lobbed his whole mackerel bait out 40 yards into 20 – 30 feet of water and placed the rod in the rest. The calm of the Harris evening was shattered when the reel screamed as the fish picked up the bait and moved off. Firmly striking into the fish Steven lent back and prepared for the struggle. Like all the Harris female commons the fish lead him a merry dance as it fought from the minute it was hooked. Despite the big girl snagging up a couple of times on underwater debris after a back breaking, arm wrenching 50 minutes the magnificent specimen was beach on the rock and gravel slope at the base of the pier.The gob-smacked look of awe on Steven’s face says it all (below).

After unhooking the fish swam a short distance out where she was seen resting for ten minutes before majestically gliding off into the darkness. The cracking fish measured out at a staggering 89 inches by 72 inches and on checking the charts the two fishing buddies realised that 225lb giant had shattered the British record by more than 20lb!