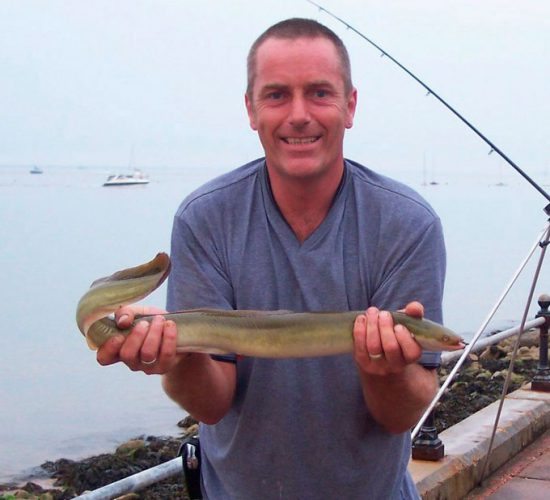 The common eel has a round, elongated body and a continuous dorsal fin which joins with the ventral fin at the tail. The dorsal fin starts well down its back, near to the vent than the gills and the pectoral fin is rounded. The lower jaw protrudes further than the upper one. Colouration on the back and sides varies from a dull brown and yellow in freshwater to dark grey almost black with a silver belly when it is mature in the marine environment.

In the sea the common eel will grow to around 2 kg. Small eels can be commonly found under rocks in estuaries.

The eel is rarely caught in water deeper than 20 metres and it’s found mostly in estuaries and harbour areas where the bottom is a mixture of mud, weed and rocks.

The diet of the common eel consists mainly of crustaceans and worms.

Peeler crab is the most effective bait for eels although they will take worms and occasionally fishbaits.