Fishing lures over hard ground can result in expensive tackle loses. Des Westmore examines at how a couple of accomplished and inventive anglers have set up to help reduce costs and produce effective lures for bass and pollack.

I have known, and on occasions fished with, Dave Cheal and Ben Creaser for many years and during that time I have come to learn that they are two of the most dedicated, successful and innovative anglers I know. The pair primarily fish from their own boats and target specimen fish in their home waters around the Isle of Wight, but also venture abroad whenever possible. 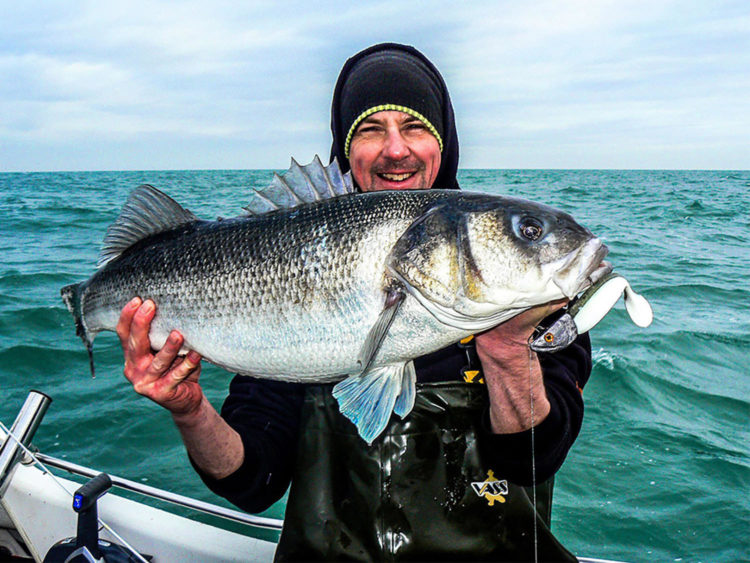 Dave Cheal with his 17lb bass

They have now taken this specimen hunting and innovation to the next level with Dave’s recent catch and release of a magnificent 17lb 4oz bass and the creation “Wight Water Lures”, a lure design and manufacturing venture. Of course, as you have probably guessed, it was one of their own lures that bagged the big bass.

A Switch From The Old Style

I met up with Dave and Ben to discuss what they were up to and why they were doing it. Dave explained that a big part of their fishing year centres around lure fishing for bass and pollack, and over the last ten years they had predominantly fished the traditional “Flying Collar” rig. At the beginning of 2018 though, they switched things around a bit after learning of a new technique whereby the lures were fished vertically and directly i.e. no boom, separate weight or trace. Dave thinks this technique was pioneered by some very good anglers out of Brighton who also targeted bass and pollack. This is probably true but as with a lot of things in angling, it is difficult to know the true origins of an idea or technique. 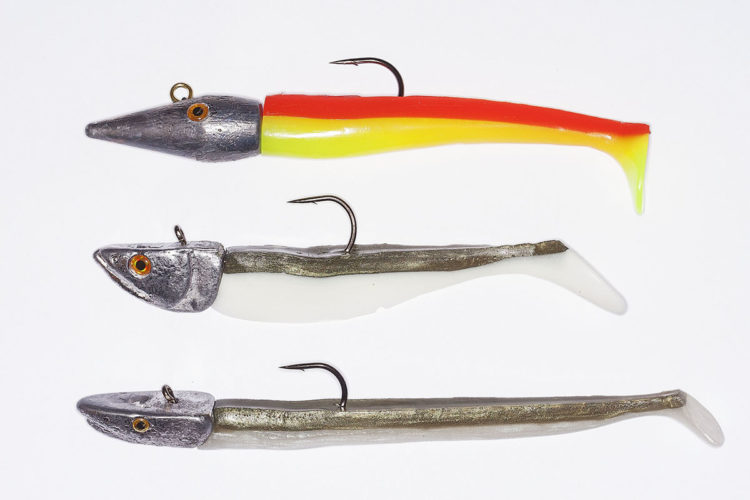 One thing that is certain though is that the first trips when the new technique was employed yielded amazing results. The new Vertical technique out-fished the Flying Collar rig 10-0 at certain states of tide. In addition, as the Vertical lures were much bigger than those fished on the Flying Collar, when everything was averaged out the bigger lures were producing the bigger fish. Big lure equals big fish is not always the case in angling, but it certainly was during Ben & Dave’s experiment. Possibly the most interesting discovery was that the big lures could be fished with fairly light, in this case 15-50g, spinning rods paired with fixed spool reels and light braid. This as Dave described it, “Increased the fun factor ten-fold”.

With the new technique multiplying the catch rate and the fun factor by ten, who wouldn’t have been impressed? There’s always a “But” though, and the downside of the marks Ben and Dave fish is that they are rocky and tackle hungry. The Vertical technique cut down on tackle losses, but the big lures and jig-heads were correspondingly expensive, and as they both fish as often as they can, their bank balances were still being depleted more than they wanted. 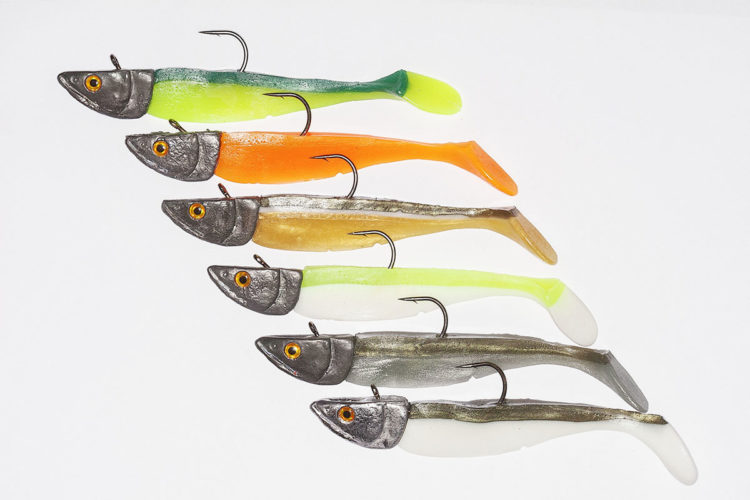 A shoal of 130g Wight’in in a range of colours

They therefore started looking into a cheaper way to fish the new method, and this naturally led to designing and making lures of the exact weight, size, colour and profile that they wanted. Casting lead jig-heads is relatively simple but to truly bring the price down, they needed to be making the plastic lure as well. This is not so simple, but Ben is an Engineer and Dave is a Production Manager, so they brought their combined abilities to bear on the problem. Ben came up with a unique development process to get the first patterns and moulds underway and they began to source material suppliers for the lures, the moulds and also the pigments that would be needed to tailor the lures’ colours to their needs. Though not shown here, I have seen their set-up as it is today, and it is very impressive.

That first lure pattern was created seven months ago, and Ben and Dave now have a range of lures and jig-heads in an array of colours and sizes that have been all tried and tested. Many fish have been caught during development and trials, from 5oz wrasse to the 17lb bass already mentioned, not to mention a host of fish in between. 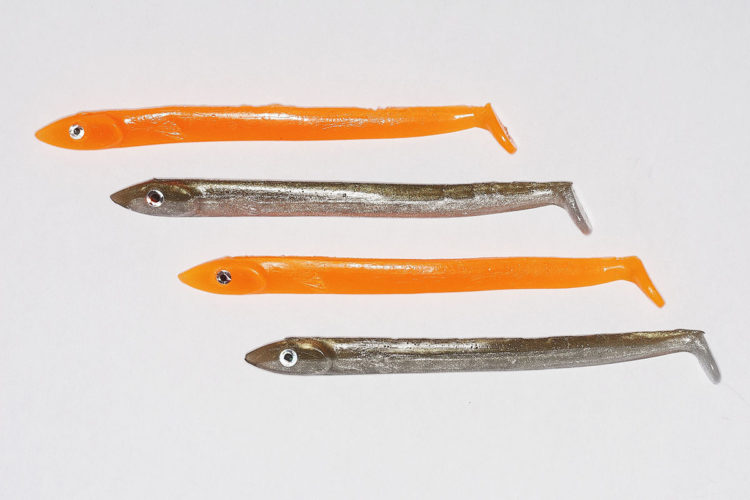 Going forward they intend to exclusively use their own lures and also to test them in Norway in the summer of 2019 – both are pretty confident the 240g “Wight Wrecker” will be a big coalfish killer, while other lures featuring luminous tails should be a great lure for halibut.

In angling anywhere, but especially so on an island, it is hard to keep a good thing quiet and Ben and Dave came under pressure to supply their products to other anglers and Wight Water Lures was born. On the day I took the photos, Dave was packaging up an order for a charter skipper in Devon, so the word is definitely out there. Nothing they sell has not been proven in real-world fishing and their mission statement “Wight Water Lures:- Handmade soft plastic lures and jig heads….designed by anglers for anglers” is not just an empty sales pitch. 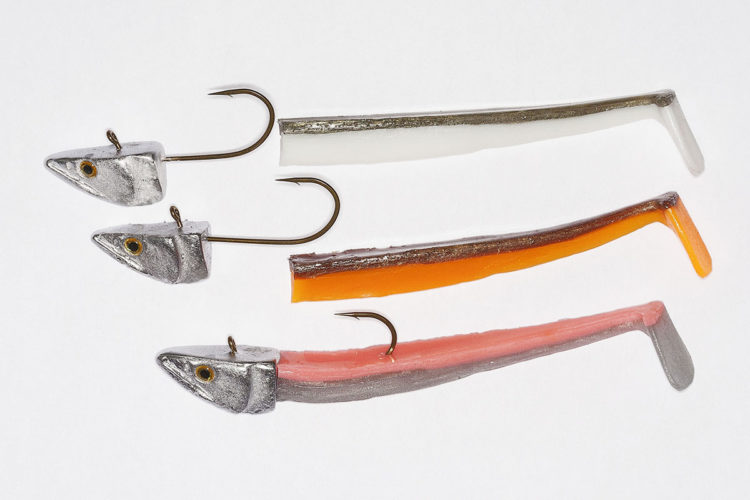 The range is ever expanding so for more information take a look at Facebook “Wight Water Angling” Page and “Wight Water Lures Group” or contact Dave and Ben directly by mobile on 07891 633911.