Another very good angling week on our part of the coast and with temperatures rising it can only get better. The boat anglers have had a very good week; Neil Marple and Ross Deadman fished from Neil’s boat off the Walton coast line, they had a great mornings fishing, landing over 30 bass between them plus a 12lb smoothhound.

The Brightlingsea charter boat Sophie Lea’s monthly report was very promising: Great weather and calm conditions have allowed local charter boats to move offshore and in doing so have had good fishing with bass being the predominant species. The Sophie Lea landed twenty fish between 2lbs to 6lbs. Most of the bass were caught on worm baits with a few falling to squid.

One notable fish was a turbot which is quite a rarity on our part of the coast. Still plenty of thornback ray to be caught and some bigger smoothhounds now showing.

Mackerel, which were in short supply last year, have made a return in force this year so the signs are looking very good for the Summer.

The stingrays have also turned up but beware of the sting in its tail! A few tope have already been caught, but it will still be a few weeks before the main packs arrive.

Alan Tipple and Sandie Davis launched their boat from the Gunfleet Boat Club ramp and headed out to the Gunfleet sands to fish on a very calm day. They were rewarded with 9 bass 3 thornback rays and a smooth hound, Sandie landed her personal best bass weighing in at 5lbs. 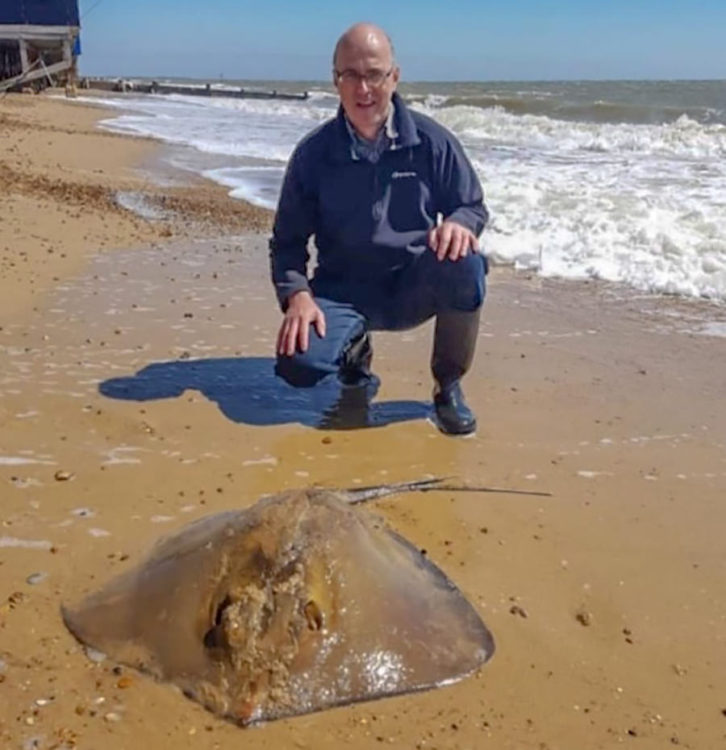 Halstead angler Peter Hart fished the Frinton beaches and was rewarded with this 60lb plus stingray.

The beaches have had an amazing week with some heavyweight stingrays being caught. Halstead angler Peter Hart started the week off with an amazing 60lb stingray from the Frinton beaches.

Neil Cocks landed a 46 pounder from the same beach along with Brian Griggs also catching a stinger from the Frinton beaches.

My trip this week was also to Frinton and I fished the golf course beaches fishing the last of the flood tide with a stiff easterly wind blowing. In just a couple of hours I landed five big thornback ray all around the 10 lb mark which is pretty remarkable for this venue!

Walton Pier is still seeing thornback ray being caught together with school bass from around the bottom of the pier, the first of the smoothhounds have also started to be caught here as well.

The Walton Pier Club fished their match at the weekend on a morning tide, with bright sunshine and a clear sea it was always going to be difficult fishing.

Fish were hard to find and with crabs stripping the baits in minutes made it more difficult. First place went to Joe Marvell with 5lb 1oz, second spot went to Dean Parker 4½lbs and third Barry Adair 1lb 9½oz