Additives have long been available to the sea angler but things have come a long way since the days of dipping in pilchard oil. John Popplewell is impressed with the spray on additives from Stinky Stuff.

I was first introduced to Stinky Stuff by Tight Lines’ Keith Arthur two years ago when we were shooting a film on Walton Pier in Essex for the Sky Sports programme. Having tested this product over that time period I am confident to report back on the product and to overcome the distinctive pungent aroma that gives it its name. 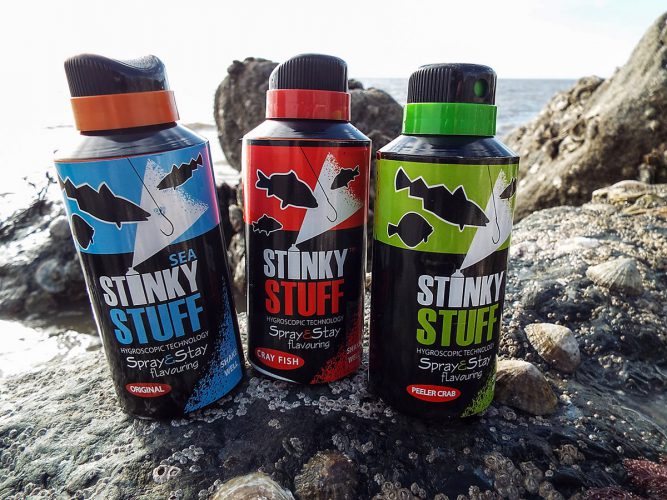 We have seen different additives come and go over the years – mostly dips; Stinky Stuff however, is a spray that impregnates and adheres to the bait like a bubbling, clinging barbeque sauce. This product has been around for a number of years now and is catching on in all branches of fresh and saltwater angling.

The concept started with the Stinky Stuff team breaking down those everyday baits that we use and finding the core amino acids from baits that were attracting fish and turning it into a powerful concentrate. They looked into the environment of fish and the favoured food that they feed on. All this information was collated into a data base, and a team of chemists were employed to extract the top scents from all those baits that sea anglers use, and is now the secret recipe to tempt those extra fish.

I have been told that Stinky Stuff is completely aquatically safe to use and is user friendly to both fish and angler. It comes in peeler crab flavour and also the original sea version, plus I also had a crayfish one to try as well. 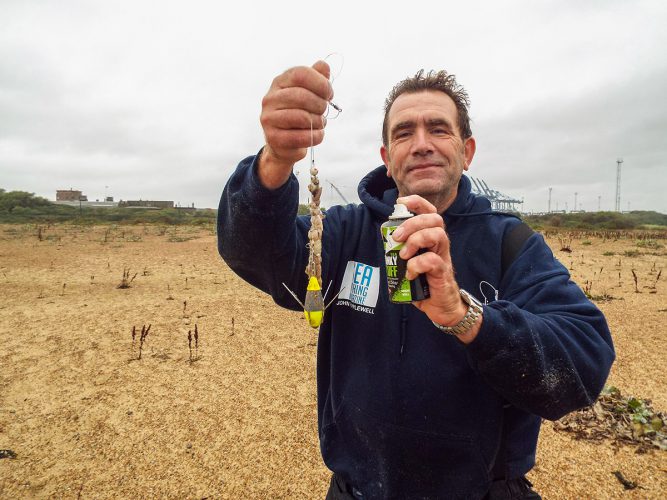 The name came from anglers asking “what’s that stinky stuff” when it was in its infancy, and the name was born. Yes, it does have a strong smell, but actually it is not unpleasant. Not only is the sea fraternity catered for but also the carp and coarse angler can enjoy its distinctive aroma.

My review has taken two years to put together to give an honest, long term assessment and it started on a windblown winter’s day on a Felixstowe beach in Suffolk in search of cod. I had arrived to fish a flood tide and to be honest the wind was so strong it was a struggle to stand up. The first couple of hours saw very little happen with just the odd small whiting showing, but I did have a tin of Stinky Stuff peeler crab spray to use.

I hooked on a whole calamari squid wrapped with a liberal amount of bait elastic and gave the bait a good spray with the stinky stuff and then left to marinade for 15 minutes before using. I cast the bait into the foamy brine and then headed for the cover of my beach buddy. 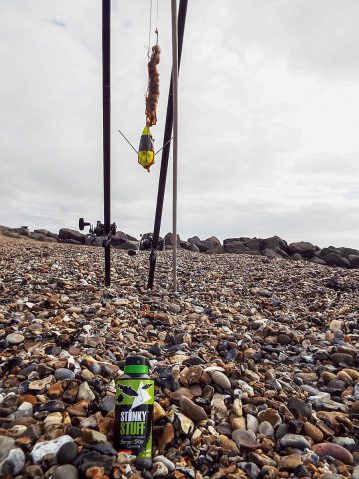 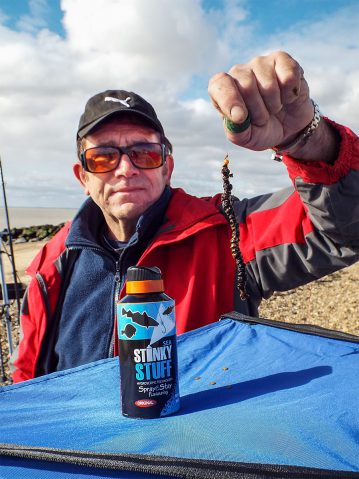 I didn’t have to wait too long as the line dropped slack as a plump codling took the prepared bait within just a few minutes of casting, followed by another on my next cast, both caught using Stinky Stuff additive. I finished this session with five codling and all fell to baits which had been sprayed with Stinky Stuff.

A couple of tips when using this spray is to have a small plastic container to spray your prepared baits in, that way you don’t waste any of that valuable juice on the beach, boat or pier, and you can soak your baits as well as protecting the equipment around you. 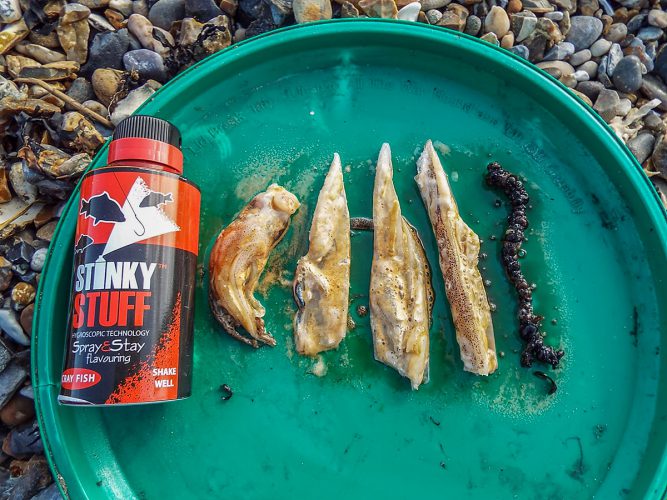 When I say prepared baits, I mean, do all the baiting up before you spray to eliminate getting too much on your fingers, because it will linger even when you have arrived back home and scrubbed your hands. But as I have already said it’s not an unpleasant smell, just a lingering one.

I found that one can will last a number of sessions and it is one of the only additives I have used where the scent stays on the bait without washing out. Twenty minutes in the water and a squid bait will come back in still smelling as strong as when it was cast out. 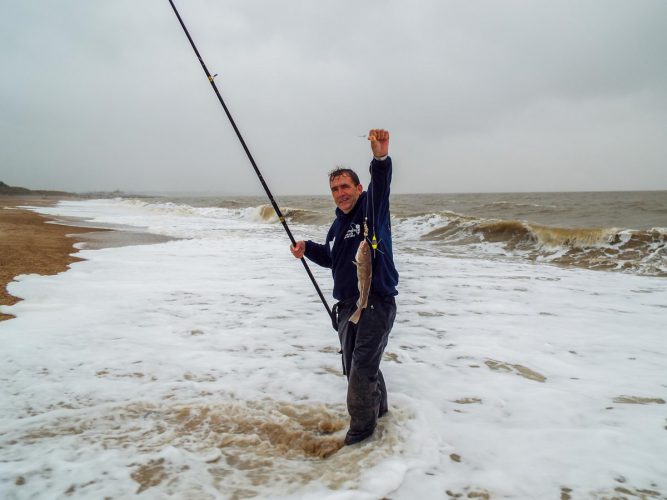 It works very well for rays and I have used it to catch more than my fair share from the Essex coast, in fact I haven’t found a fish that will turn its nose up at it yet. I now always carry a can in my tackle box, just for a quick spray or when the fishing is tough and that extra scent emitted by Stinky Stuff might just keep you in front of your mates.

Stinky Stuff can be bought online, www.stinkystuff.fishing and comes in 100ml cans. Original, peeler crab and crayfish, costing £9.99 per can. Quote reel1000 and get 10% off of purchase price.