An ‘Animal’ rig describes a heavy duty boat trace designed to work through a busy session hauling fish with abrasive skins and teeth, such as rays and spurdogs. Here Planet Sea Fishing comment on the Animal Rigs produced by Irish company, Shamrock Tackle. 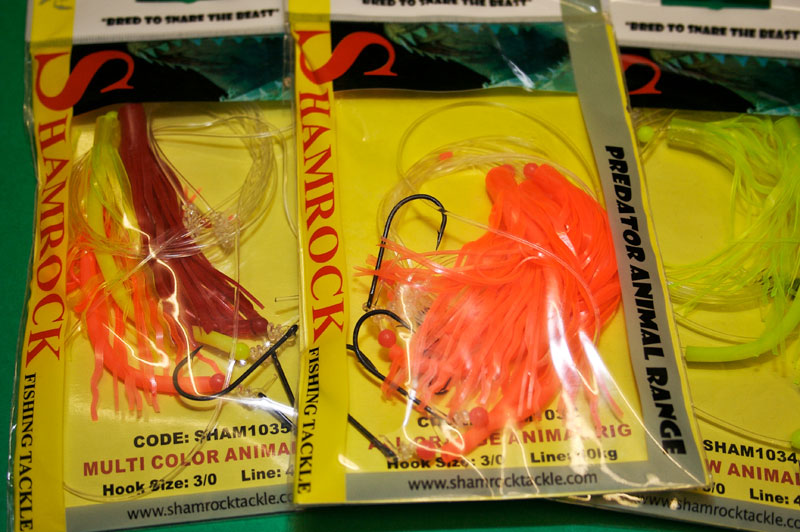 Shamrock’s Animal rigs were developed by members of the Irish international boat team off the east coast of Ireland where the fishing can be hectic for bull huss, ray, spurdog, hounds and mountains of dogfish among a host of others species. They have found that adding some visual attraction in the form of muppets and beads works incredibly well for a wide variety of species all around the UK.

Intended to be used at anchor and fished in front of a sliding boom, each rig is formed of 6.5 feet of 90lb clear mono and sports three 3/0 hooks. A long three-down rig for fishing hard on the bottom, a large connecting rolling swivel runs to two 6-inch droppers sprouting from simple cut blood loops behind the point hook. Each hook is garnished with a muppet-type skirt and a length of colour coordinated tubing which builds in some additional protection from biting teeth.

These are uncomplicated and functional rigs but they do need a little attention before use. The mono heavy has considerable memory and as such it is best to give the whole rig a good stretch before use, or even draw a folded piece of rubber along each rig a few times to drag it straight. The knots are not the tidiest either, and I would have preferred such as a Grinner knot to the hooks, where the tag-end points straight back up the line. As it is the simplest of half blood knots is used which sees the thick tags sticking out at bait-damaging right angles to the eye of the hook. The long tags need to be trimmed back a little too. Hooks are similar in aspect to the Kamasan B940S short shanks but with a more pronounced barb. 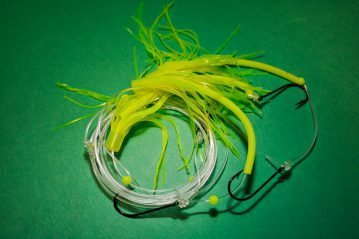 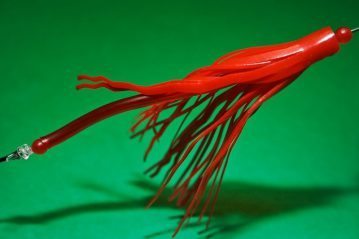 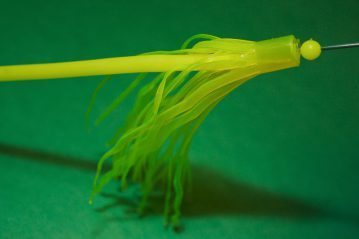 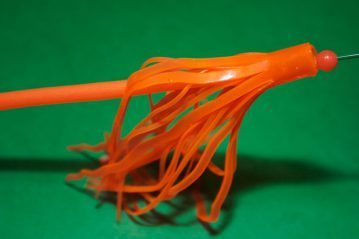 Shamrock Animal Rigs are available in four different colour variations of red, orange, yellow and mixed. Bait and fishing situation recommendations are detailed on the packaging. Available through Shamrock stockists.