Scrabster in the far north of Scotland is a venue rich in various species of fish and opportunities for the small boat & kayak angler. Davy Proudfoot serves up a guide to the nooks and crannies, and offers the knowhow to tap this superb northern location.

The majority of fishing around Holborn and Dunnet Head is carried out within 400 metres from the shore. The shoreline is composed mainly of cliffs interspersed with the occasional sandy bay. The sea bed close to the cliffs is usually very rocky and covered with kelp beds. Further offshore the bottom is mainly sand and shingle with small rocky patches usually covered with ‘dead man’s fingers’, soft coral.

As you move out from the cliffs there is generally a steep drop at their base which levels off to around 20 metres for a short way before a second drop-off is found which falls away to around 30 – 35 metres. Normally the first ledge is home to the pollack and coalies, with the majority of the other species being found at or near the base of the second drop-off. 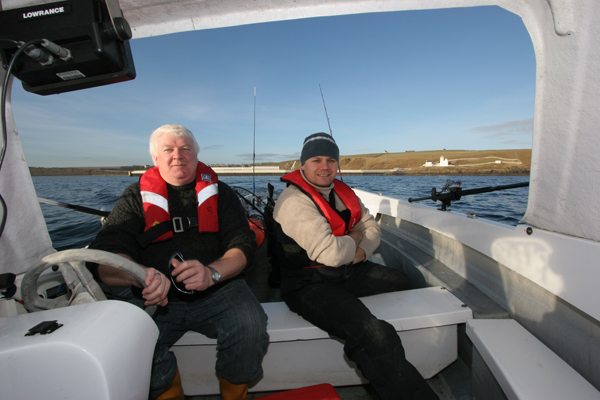 During the summer months the knowing locals will fish out in the deeper water with good results across a variety of different species. The following is a guide to the more popular marks all of which are within easy steaming distance of the local slipways. All charts in this feature are provided by Garmin UK and are copyright reserved.

The flood tide generally runs east to west along the coast and can be very strong around the various headlands.

Holborn Head and West Side

This bay sits just to the east of the former US radio base at Forss and lies in the lee of the five wind turbines which now occupy on the site. If fishing any further west of here you run the risk of entering the closed area off the UKAEA site at Dounreay. In the bay itself expect cod and decent pollack close in. Drifting on the edge of the second drop-off between here and Brimms Ness will produce cod with the chance of ling and sea scorpions. The first of the season spurdogs are usually found here, north of the 40 metre contour. The kayak angler has the advantage of being able to cover this area by launching in Crosskirk Bay itself. 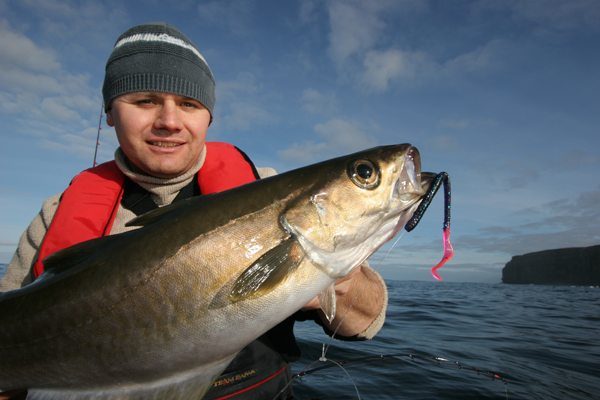 This rocky outcrop is popular with surfers and usually produces the season’s first mackerel in the tide rip. Pollack normally sit on the hard ground which rises rapidly and causes a confused sea when the wind is against the tide. Again the cod are normally to be found where the hard ground meets the cleaner mixed seabed. The bay to the west of Brimms is shallow and strewn with kelp and boulders. There can be some big red cod in here during the summer months and pollack can be taken by trolling near the shore, but keep an eye open of the rocky outcrops which jut out from the base of the cliffs.

Named after the Caithness slate quarry which used to operate at the top of the ciffs, this point sits to the east of the Little Clett. Good cod, pollack, ling and wrasse can be taken along the face of the cliffs just to the west of the point, with decent dabs and LSD out on the clean ground. Fishing further off in the summer months can produce the occasional haddock and codling. And last summer saw a porgie attacking hooked cod when fishing out in 50 metres of water. Some big ling have been taken in the small bay next to the Quarry, and a small reef which lies off the caves in the bay produces pollack. 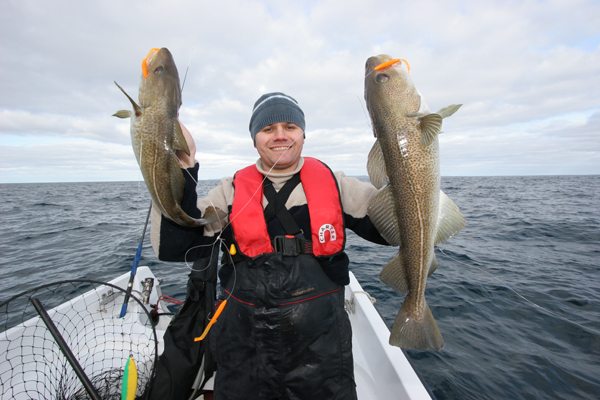 This is a small point which protrudes out from the base of the surrounding cliffs. Between here and the quarry is a popular area for cod, ling, pollack, coalies, mackerel, together with ballan and odd cuckoo wrasse close inshore. Fishing out on the cleaner ground in depths of 40 metres plus can produce haddock, whiting, spurs, plaice, dabs and grey and red gurnard.

This stack stands about 200 metres west of Holborn Head and most of the cod family can be taken around here. If the weather is good it’s worth a steam round the back of the Clett as the rock strata gives the sensation of sailing up or downhill. The tide rip between here and the Head is always worth a try for mackerel and sandeels.

Between here and Scrabster Lighthouse it’s worth dropping the the anchor for dabs and LSD. If the weather permits anchoring close to shore, then conger can be targeted. The tide can run strongly off the head and care should be taken particularly when the wind is against the tide. Due to an eddy the tide runs generally south to north along the face with only around an hour where it runs in the opposite direction. 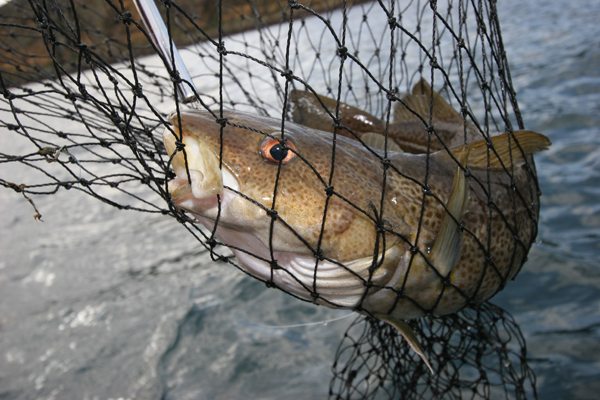 There are two slipways at Scrabster, the outer one is only fit for launching when the weather is settled. For permission to launch at the one next to the Fisherman’s Mission you should contact the Harbour Master on 01847 892779 or send an Email

This is a sneaky one for species hunting as flounders and the odd bass can be taken here close inshore. Avoid the area where you see seagulls working off shore as this is the end of the sewerage pipe and your line will end up covered in all sorts of waste matter, although it’s not so bad as it used to be! Congers can sometimes be found along the rocky ledges at Thurso East. Easy access to the beach for launching a ‘yak is available from the west end of the promenade. 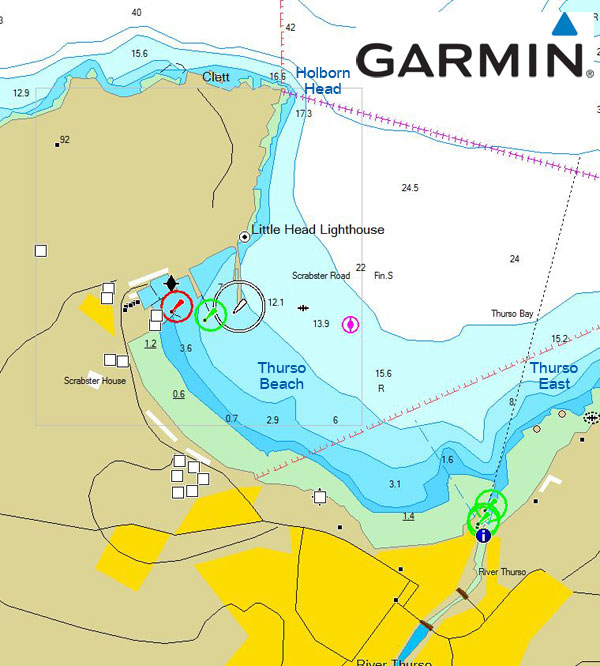 Dunnet Head and East Side

As noted on the Admiralty charts this mark is known locally as the Hump – N58 37.650 W3 30.044. This is an area of rough ground approximately the size of a football pitch which rises from the sandy bottom at 45 metres to around 15 metres at its shallowest.

On top of the Hump you can expect coalies and mackerel in season, with the water occasionally boiling with fish on a summers evening. Around the drop-off into deeper water, wrasse, pollack and ling can be taken with cod on the edge between the rocks and the cleaner ground. The cod can be either on the east or west side depending on the tide. The odd conger is taken here at anchor. During July to September spurdogs frequent the deeper water on the north side. Expect to lose tackle on the hard bottom  when the tide is running strongly. Like most of the inshore areas off Scrabster keep an eye out for lobster pots. 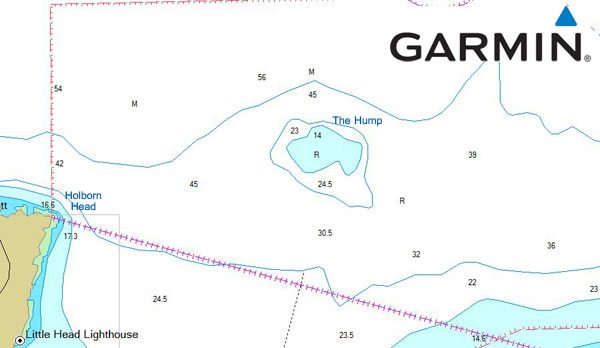 This point sits to the west of the small harbour at Dwarwick where there is a reasonable slipway that allows launching and recovery from half tide. You’re supposed to pay the Highland Council for launching but have yet to see anyone checking on this. The clean ground to the north west of Dwarwick produces dabs and plaice on the drift.

This is the south west corner of Dunnet Head and produces launce during the summer months together with the normal members of the cod family. In the slightly deeper waters off the cliffs to the north of here cuckoo wrasse are worth targeting. 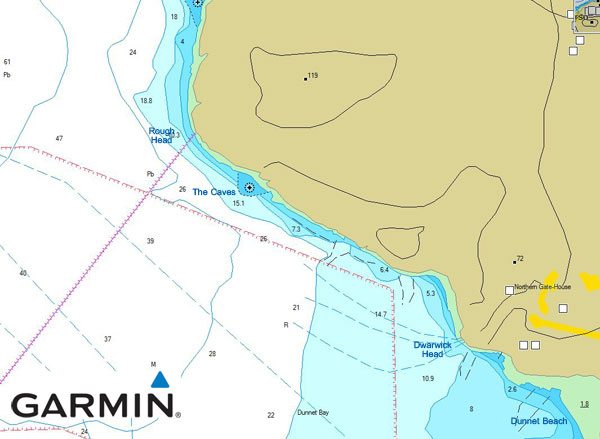 This is a shallow geo indentation in the cliffs and a reef runs out from its base for about 100 metres to the west. Cod, pollack, ling and coalies can be expected off here, and it’s around this area that the porbeagles show during the winter months. Many moons ago this area used to be one of the main marks for halibut and a couple have been landed here during the past 15 years. Like the Holborn side of the bay the tide can run strongly off Dunnet Head and care should be taken particularly when the wind is against the tide. Due to an eddy the tide runs generally south to north along the face with only around an hour where it runs in the opposite direction.

An area of sand banks to the east of Dunnet Head – N58 39.310 W3 27.771 and can produce sandeels, dabs, LSD and whiting. It is not regularly fished and I wouldn’t be surprised to hear of turbot from this mark. Recently several plaice have been coming off clean ground marks so it might be worth targeting them on this mark. 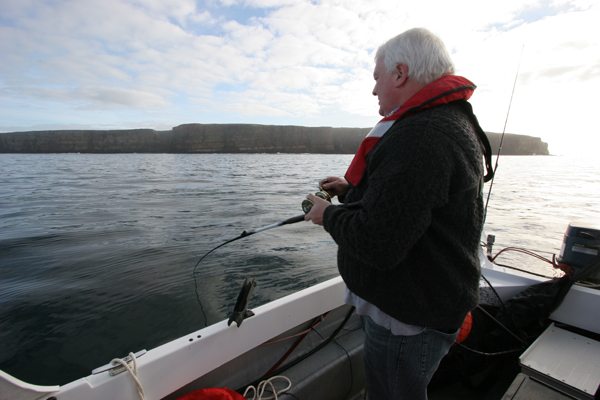 This point marks the north west of Dunnet Head and between here and the lighthouse can be prolific for pollack in the shallower water. Porbeagles also frequent the area from here to the lighthouse during the period from November to March. 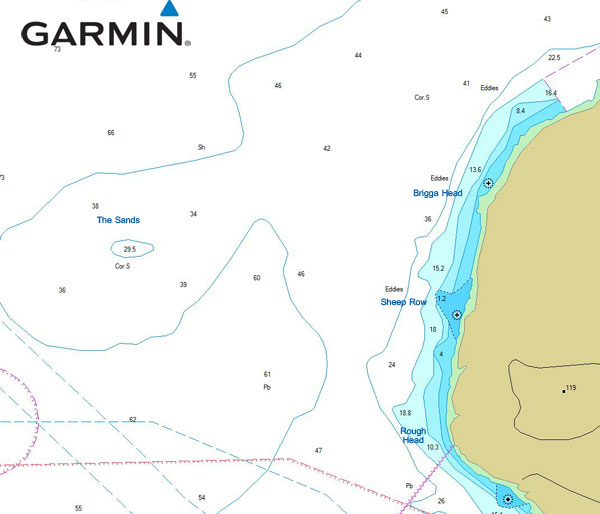 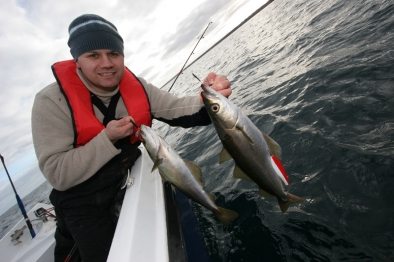 This is a small bay to the west of the Lighthouse and there is a hole just off here which can produce good ballan wrasse. Cod, pollack and ling also frequent this area. After passing the Lighthouse you are into Brough Bay on the east side of the Head, and this marks the start of the Pentland Firth between the mainland and Orkney.

Difficult to describe this mark but you’ll know it when you see it. Close inshore for good pollack and when the tide rip starts offshore it’s worth the bouncing about for the numbers of cod and pollack found chasing the sandeels here. Ballans can also be expected inshore, with ling and cuckoo wrasse out about the 35 metre mark.

The water shallows up as you approach the slip at Brough and seals can be a pain here. The slip is very tidal and only really suitable for launch around 2 hours either side of high water. Lots of boulders around here so worth a look at low water before launching. It’s worth anchoring up out where the bottom falls off in 50 metres plus, as there have been reports of common skate here and again this used to be a recognised halibut area. 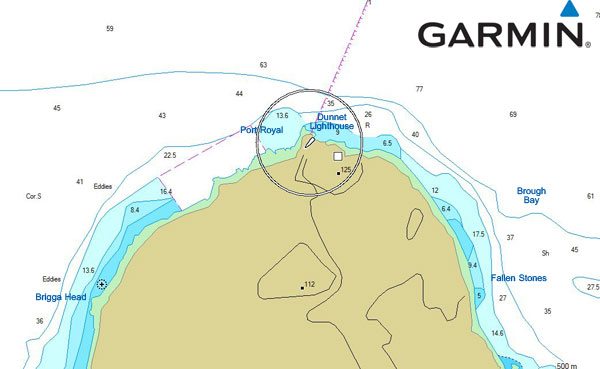 I hope this guide helps if you decide to visit the far north with your boat. Bait is scarce other than mackerel during the summer, and while some lug and small whites can be dug at Castletown, I’d suggest bringing a good variety of baits north with you.

Thanks to  Garmin for permission to re-produce the charts from their quality software.