Les McBride tests the new FOX Sailfish Trek Spin rod on a trip to Kenya and discovers that it’s not just ‘another’ tidy travel stick. A versatile design with numerous applications, he concludes that anglers could easily use it both at home and abroad.

There are two FOX Sailfish Trek spinning rods: The Trek Spin XT and the lighter Trek Spin version that I had for testing in Kenya. Both are compact 4-piece, 8 footers, and come supplied in a smart hard case measuring 27 inches, ensuring that they should fit into most travelling anglers’ suitcases or holdalls. Superbly built, the Trek Spin rod is light enough to hold all day while bait fishing or chucking lures. It is long enough to very capably chuck heavy poppers at such species as jack crevalle or medium-sized giant Trevally from the shoreline, while not so long as to be ungainly as a teasing pitch bait rod for sailfish from the boat. 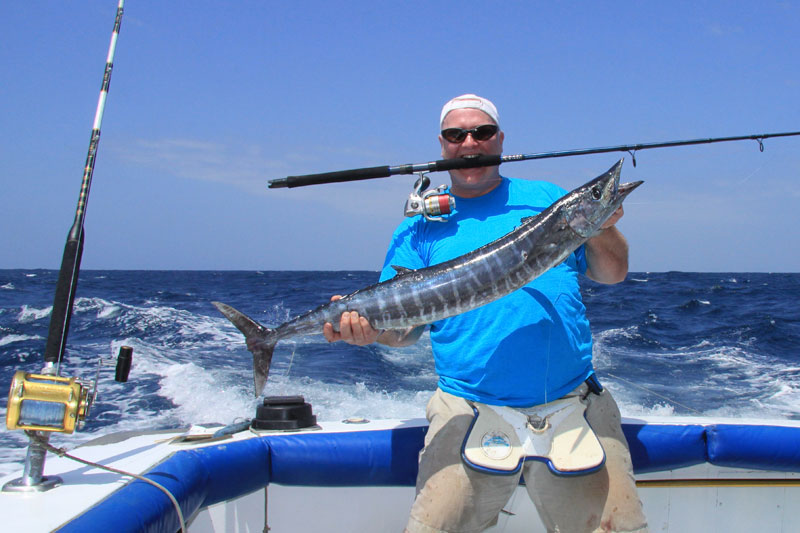 Built from high quality carbon, the rod is very fit for purpose being both desirably stiff and responsive. Finished in the TREK range signature blue with similar whippings on the rings, the rod isn’t aesthetically overstated. Indeed the only ostentation perhaps is a short piece of blue/black/gold cross whipping on the bottom of the section above the handle. It’s smart all the same.

The Trek Spin is comprised of four sections; these join together via push-in joints rather than the usual spigots or pushover fits. My opinion is that this provides a more seamless overall action. I was a little surprised with the rings given that this is a pricey bluewater rod. I expected genuine Fuji’s but noted instead FOX’s own brand of ‘Slik’ ceramic lined guides. These certainly look the part at a glance, but only time will tell whether they are as good as genuine Fujis. The rings are finished in a single blue colour with just the right amount of epoxy finish.

The handle is solidly built with an ergonomic foregrip sporting four indentations for your fingers. The Fuji reel seat is well sited, while the rear grip is also ergonomically shaped to give maximum grip when casting. Pulling off the substantial rubber cap on the end reveals a plastic gimbal fitting. My preference would have been a light Fuji aluminium gimbal. 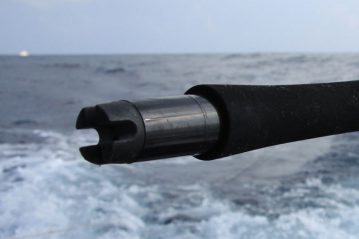 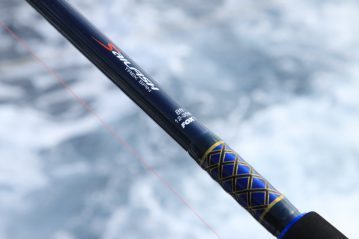 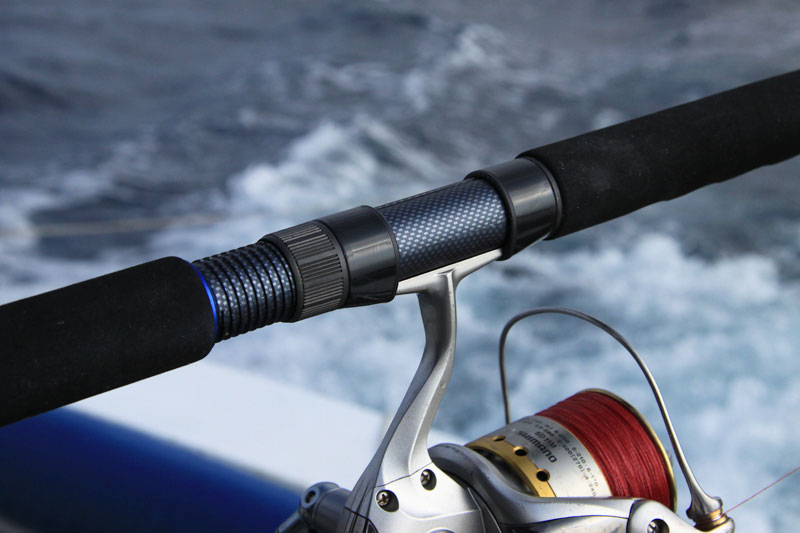 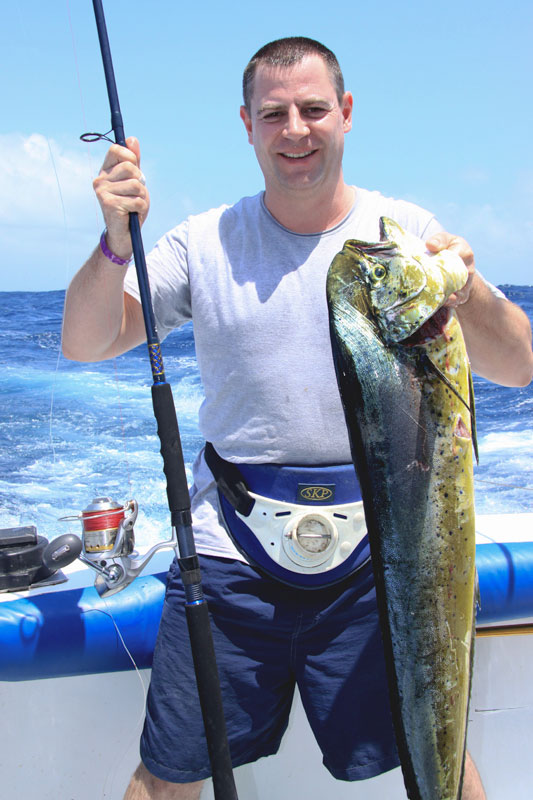 I put the Trek Spin to work as pitch bait rod for sailfish. The idea here is that should a sailfish move close to the boat in the propwash – as they often do – a small dead bait can be dropped right in front of it’s bill. As the sail grabs the bait, the hook is set and you just hang on tight while it bolts for the horizon at 100mph… pure adrenaline fishing for sure!

I matched the Trek Spin with a Shimano Biomaster 6000 spinning reel holding almost 400 yards of 30lb Power Pro braided line, and had several chances at not only sailfish but also close-quarter striped marlin. Several fish took the offered pitch baits, but unfortunately both Tony Voss and I failed to get a hook to stay in a fish for longer than 30 seconds….BUGGER!

Several modest wahoo and dorado to around 20lb were caught on trolled Rapalas with the Trek Spin on the downrigger. These fish fought hard and did not stress the rod, which rode the runs and power dives beautifully. Without doubt the rod will cope with much larger fish and provide the user with some great sport. The blank is very responsive with plenty of power in reserve. The ring spacing is good with no obvious flat spots under load of some reasonable fish. And a 150g jig can be cast 50 metres with just a flick.

Up until the last few years, multi-section travel rods were something of a compromise, usually budget-priced (well under £100) and underpowered. They were okay for putting in a suitcase to take on holiday, but they would rarely see the light of day as a first choice rod for day-to-day fishing at home. With the FOX Sailfish Trek however, you get a quality rod with a considered action that is a pleasure to use at home as well as overseas. In other words, this is a versatile rod that you will not be inclined to sling into a dusty cupboard to be forgotten until the next foreign excursion.

At home the Trek Spin will be brilliant for spinning or float fishing for pollack from the rocks, or gilling from the boat. And this season it is my intention to use it for shallow water smoothhounds and tope.

I have used nearly all the rods in the FOX Trek range and would mark this particular rod as the most versatile of those that I have handled thus far. At 8ft it can be used from a boat for almost any middleweight species. It also stands up well for casting lures or bait from the shore in places like the Florida Keys and the west coast of Africa. I would also suggest that the Sailfish Trek Spin would be absolutely superb for casting small pirks or fishing big shads in Norway for cod and big coalfish.

The Sailfish Trek Spin costs a tad over £200, and is available direct through the FOX International website here.