With my latest trip to Norway looming I called Steve at Planet Sea Fishing to see if there was any new gear waiting to be tested for the website review section. I was quietly hoping for a nice new light rod to try for big coalfish, or a reel, or even some of the new colour 2013 large shads.

“Sure, pop round, we might have something for you to try out”, came Steve’s mischievous reply.

My hopes were somewhat dashed when I saw the contents of the box that I was handed with a smile. Several very smart looking, individually boxed large hard bodied lures stared up at me and I tried not to look too disappointed.

My task was to take the lures out of their comfort zone and to push them to the limits of their endurance on Norwegian cod and coalfish, and at depths beyond which they might normally work. A quick look at the packaging revealed the lures were from an Australian company called Balista. Interestingly, all were fitted with a “blood red” flashing LED light in the tail of the lure designed to “drive the fish crazy” according to the wrappers. I am not one to turn down a challenge, so I set off determined to see what these lures could do when pressed into service in the sea.

There are a few LED fishing devices on the market already, with the ESCA lights immediately coming to mind. An ESCA isn’t strictly a lure but more of an attractor, something you attach to your lure or bait, and flashes when you put it in the water. Balista lures are a completely different concept, with the flashing LEDs intended to provoke instant attention from predatory fish, and draw them straight onto the lures and the waiting treble hooks.

Closer inspection revealed a small piece of wire protruding from the back of each lure to ensure contact with the water. Sure enough, I dropped one in a sink full of water in the dark, and I was really surprised at just how vibrant and bright the LED was flashing. I’ll admit to some initial concerns about the robustness of the hardware on the lures in the saltwater situations I would be using them. My uncertainty centred on whether or not to swap the standard trebles and split rings for something stronger and slightly bigger, given aggressive coalfish and cod to 30lb were expected. 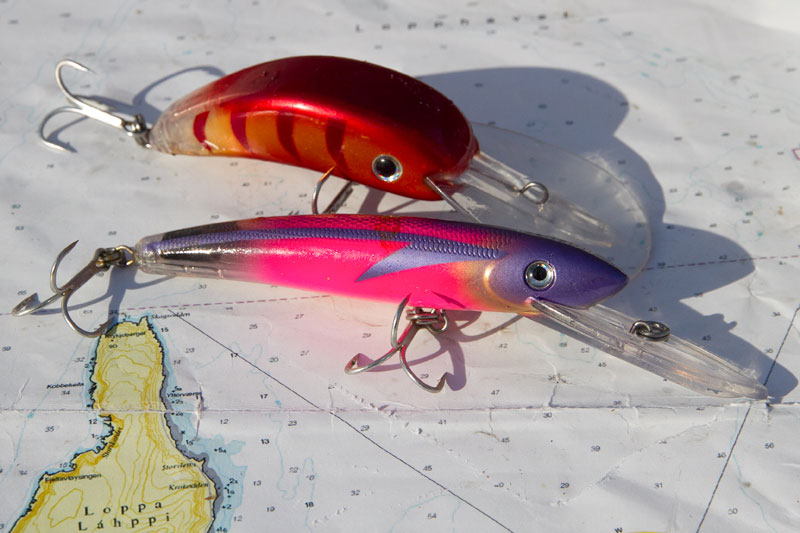 The detailed info on the boxes describes the Balista lures as suitable for Barramundi, Murray Cod, Jacks & Mullaway in Aussie waters… all big, tough, hard-fighting fish. Despite their small size, the fitted split rings are stainless, and the hooks look like a VMC style, so I decided to leave alone and fish them straight from the box.

Once out in the wilds of Arctic Norway I had to find a way to fish the lures that wouldn’t interfere with the fishing of my boat companions. As there had been some 10lb+ coalfish had been caught inside the fjord at depths of 15 to 30 metres, well beyond the diving range of the lure with the deepest capability – the DYNO 90 – I had taken a paravane with me. My grumbling companions were less than enthused at the prospect of trolling around the fjord in the hope of connecting with a coalfish on the plug while they sat and twiddling thumbs. My solution was simple – fish the plug on a six foot trace from a boom carrying a 300g lead in order to get it down the required 80 metres to where the cod and coalfish were.

With the method straight in my head at least, I selected the longer, brighter ‘Glimmer Pink’ coloured Firestorm 120 lure which sports a smaller bib to reduce the drag and dropped it into the crystal clear fjord. I worked it as I would a Red Gill or Sidewinder lure for a full drift, but despite my colleagues catching cod and coalfish in the 8-20lb range I failed to get a touch. 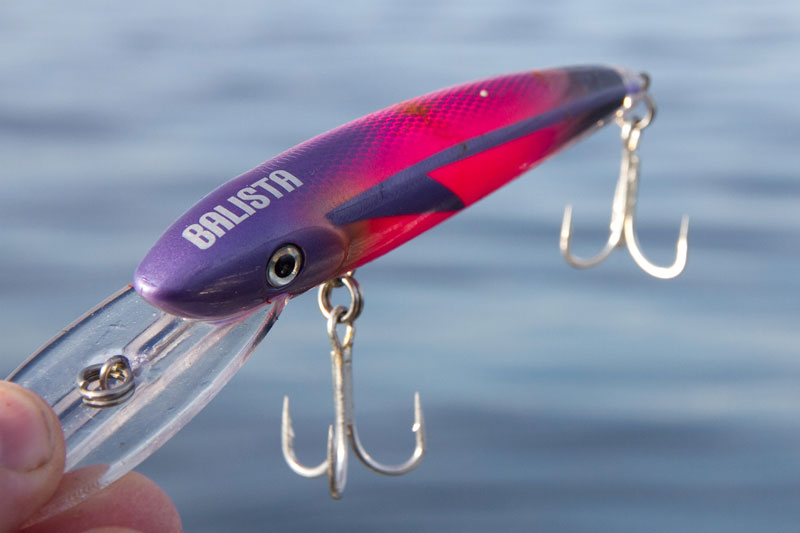 When I retrieved my tackle, I found the lure wrapped around the mainline and not working at all. Next drop I let it down slower – irritating when others are catching fish after fish on small pirks – but I stuck with it until I wound in another tangled mess. Frustrated, I chucked the trace in the corner and proceeded to catch my share on a more orthodox small 150g pirk.

The weather over the next few days allowed access to the open sea where the really big fish live. The Balista lures had stayed in my box untouched until an ideal opportunity presented itself. We had been catching numerous coalfish in the 8 – 16lb range and a few mid-water cod until all drift movement died on slack water. Despite fish being visible on the sounder, none of us could get them to eat our sandeel lures or pirks. Swapping to a flashing LED Balista brought instant results.

After the first experiment with the Firestorm 120 lure, I had come to the conclusion that the diving vane on this particular lure was being overcome by the speed of the lead pulling it down, resulting in it spinning out of control around the mainline. My instinct was telling me that the larger bib on the DYNO 90 lure might cause it to actually swim away from the mainline. 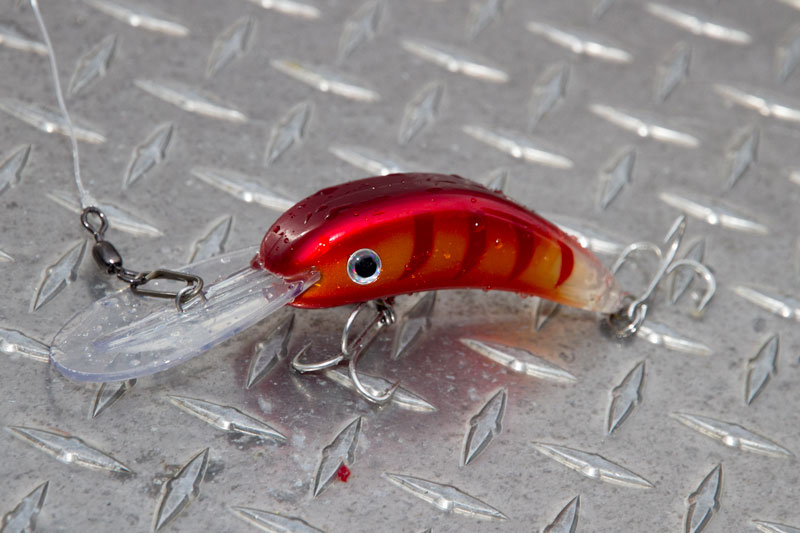 I’m pleased to say that my instincts proved correct, and I watched the ‘Bronze Craw’ pattern DYNO 90 flash its way out of sight into 60 metres of clear arctic water. As I started the retrieve there was noticeable drag on my light rod, and I could feel every vibration from the lure as it rose in the water column. Once in mid-water the rod tip loaded heavier and heavier and then line began to strip off the reel – a coalfish had grabbed the DYNO 90 and started heading for the seabed. The other guys were still failing to catch on their conventional lures and here was a fish instantly on the weird flashy thing. With the fish landed, photographed and returned, I sent the DYNO 90 straight back down and once again it was hammered in mid-water, this time by a cod. Another coalie grabbed the Balista on the next drop too while the others looked on fish-less and somewhat confused.

That was three good fish in three consecutive drops, while the standard ‘pilks’ and Savage Gear sandeels failed to score over the slack water period. Was it the action of the little plug, or was it the blood red flashing LED that made the difference? 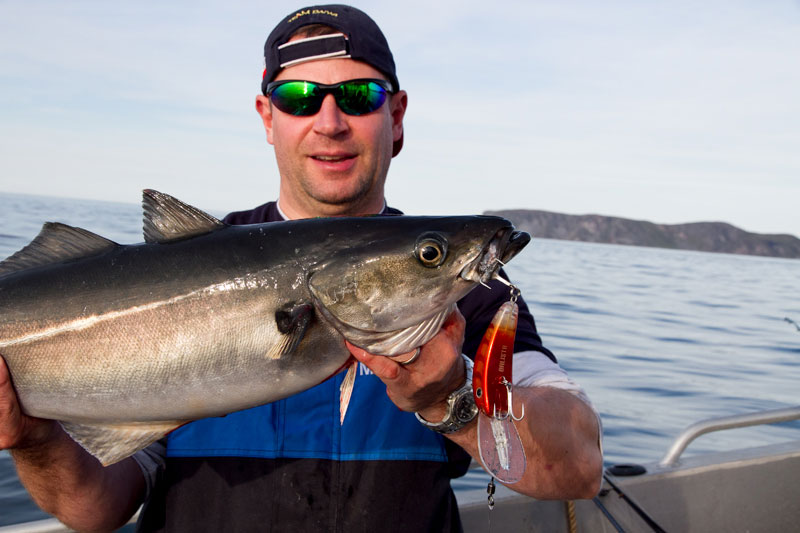 Taking tackle out of its comfort zone is a good way to test it and this was certainly what was done with the Balista Firestorm 120 and DYNO 90 lures. Granted, there is always the danger that lures intended to fish in the surface layers probably aren’t going to react wonderfully well to the water pressure at nearly 100 metres. The Firestorm 120 is a case in point. When I set it aside on that first day it was still flashing, I assumed this was due to the lashing rain washing everything in the boat. However, later close examination revealed the body of the lure to be full of water.

I can only conclude that the lure’s casing failed either due to the increased water pressure at 80m+, or that it lure became damaged due to my lack of attention early in the trip. Although the product blurb states a
battery life of 120 hours it flashed itself to death quite quickly; or perhaps saltwater short-circuited the electronics… I can’t be sure. The DYNO 90, on the other hand, survived 60 metres depth, harsh treatment, and still flashes like a big red lighthouse. Apart from a few wear-and-tear scratches from cod teeth, it remains in excellent condition and working order. Incidentally, the split rings and treble hooks proved excellent, and I would confidently tow these lures in front of very large fish without fear of a ring popping or a hook bending out on such fish. 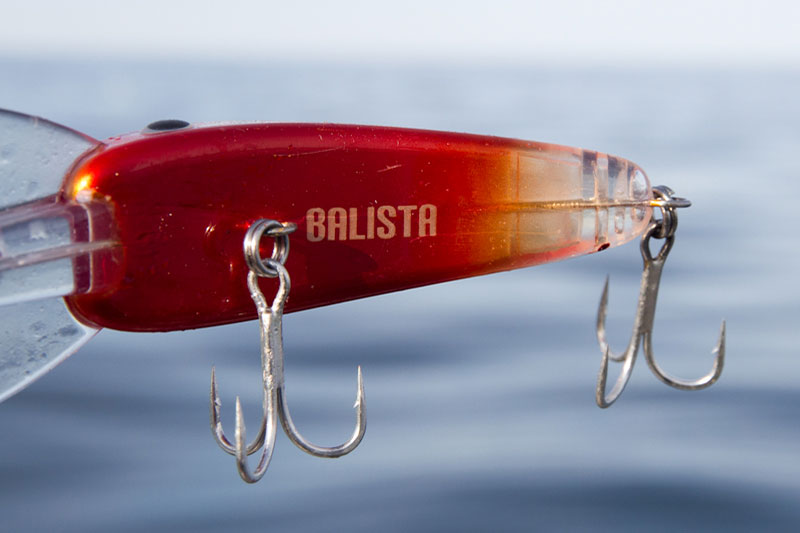 It is difficult to draw clear conclusions from this test. The DYNO 90 caught fish when standard methods were ineffective, and there is certainly a time and a place for these lures in an offshore situation. Did the bright flashing red LED light provoke fish to take, or was it the rattling of the ball bearings contained within the lure? Was it the in-built swimming action, or could it have been a combination of all of these things? With my confidence ignited, I’m sure I would have kept catching fish when the tide started running again, but would I have caught more or bigger?

I believe there is massive room for experimentation with such LED lures both from the shore and at sea. With detailed consideration of lure body shapes, swimming actions, weights and inherent abilities to deal with saltwater/depth situations, there is huge scope for Saltwater LED lure fishing worldwide.

Balista lures are finished to a very high standard and potentially they are the beginning of something that goes far beyond what many sceptical sea anglers might regard as gimmick. Given time, I can see suitably configured lures being responsible for huge European fish such as halibut, and all manner of weird and wonderful species from deep, dark waters.

Practical uses for anglers in the UK for Balista lures have to be bassing: used at dawn, dusk or indeed in total darkness. From the boat, the English Channel wrecking guys may benefit from the possibility of a few extra pollack over slack water. And, of course, there are allsorts of wonderful bass trolling possibilities. Pike and especially nocturnal zander in freshwater will be all over these lures like a rash I’m sure.