Edinburgh-based Port O’ Leith angling club boasts a proud 40 year history and is predominately focused on regular charter boat outings around Scotland and across the border into Northumberland. A healthy participating membership has recently been joined by flush of new blood, including several boat owners. As such, interest in this branch of the sport has flared, with old hands only too keen to chase down some big fish from the small boats. 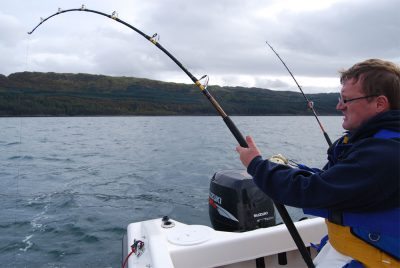 No sooner had targeting common skate from the club boats been muted than a date was set. There’s nothing like jumping straight into the fire and I was desperate to try and get the lads who were new to this kind of fishing the flaming baptism they wished for.

A four-hour drive from Edinburgh saw us on the slip at Crinan village – which lies to the south of Oban – by 9am. An ideal small tide coupled with a favourable forecast meant spirits and expectations were high. Launching and loading was a piece of cake with plenty of water under the Warrior 165, and something of a let-off for my fledgling crew of Dale Duff and Mrs Brown lookalike, Alan Haggon.

Crinan slip is an excellent facility and can be tackled quite easily with standard vehicles rather than 4 X 4s. However, retrieval on larger tides, particularly over dead low water, dictates driving on the sand, or roping the trailer out. Launching costs £10 per boat, and only a fool would ignore the honesty box provided.

The club had four boats scheduled to be out fishing, but a trailer bearing failure saw one of our little fleet Shanghai-ed on the roadside at Loch Lomond and out of commission. Like good concerned fishing pals the world over, we shrugged our shoulders when the message came through, abandoned them to their fate and went fishing!

Crinan was bustling with activity as we put to sea. Apart from our three boats, local charter boat, North Star was awaiting a party of anglers, while a group of regular extreme kayakers were milling around sorting bolt-on electronics and fishing kit for what some might regard as a mad assault on the productive Crinan big skate marks. After a quick chat to Archie MacGilp, skipper of the North Star, we headed out to an area in the Sound of Jura, which had produced well earlier in the year. We set the anchor down in 450 feet of water and the two new boys proved to be capable hands… well, sort of – Alan resides on a different planet much of the time and needed a kick in the ribs! 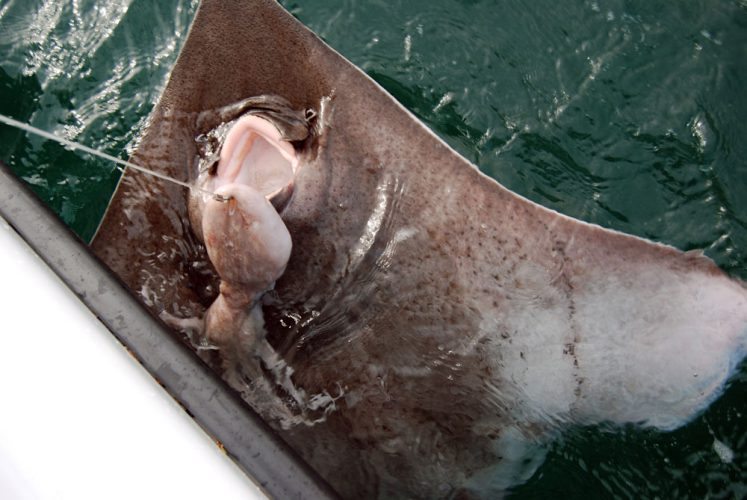 With flat conditions and light winds predicted all day, it was an enjoyable, easy introduction for both Dale and Hag-bag. The lads had heeded my advice to keep kit to a minimum, given that clear space is essential when trying to measure and return common skate that can be as wide as the boat. We had plenty mackerel, coalies, octopus and squid for bait, and it didn’t take long before the first of our carefully prepared offerings settled the seafloor.

As is traditional, the ‘newbie’ is given the honour of the first fish, so skate virgin Dale was togged with a harness and butt pad. A run came after just 10 minutes. Dale bent into the fish, cursing and panting his way to a reasonable conger, which was quickly released. The next few hours brought steady pickings that included more congers, and both Alan and Dale landed-and-released modest common skate before the decision up-anchor to shift a mile further was taken.

Dale is handy with a frying pan, and he busied himself rattling up breakfast as I dropped anchor again. I’ll stop short of calling Alan “useless”, but he did forget the bread rolls and the abuse the left-and right abuse he received was well deserved. We waited for the anchor rope to straighten before dropping the freshly baited hooks. I have great confidence in octopus as skate bate, having enjoyed tremendous success on it in the past. 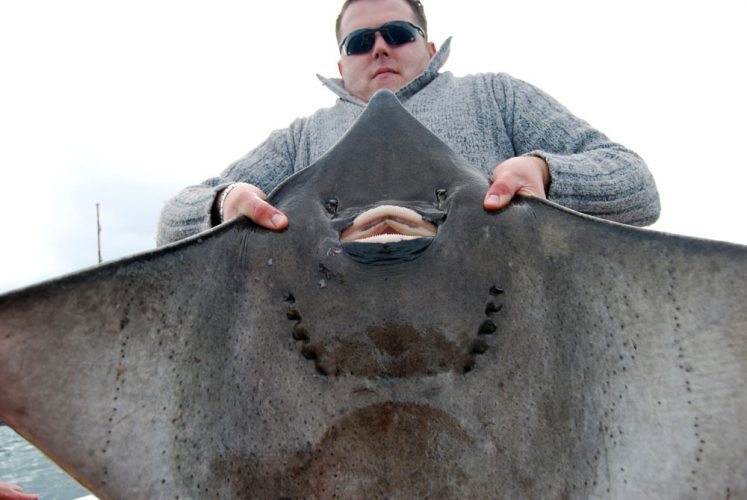 Several tentative takes came to nought and were preceded by a dropped fish. Then, a strong run on my rod prompted me to pass it to Alan, who straightened his glasses and quickly wound down into the weight of a better fish. He managed to lever it free of the bottom without incident, steadily claw back line with the help of the twin-speed reel in low gear. 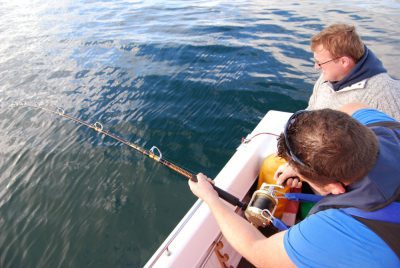 Alan’s line recovery technique wasn’t bad at all – using his body rather than his arms to fight the fish in truer stand-up style. He was more than half way home when the fish suddenly dived and easily stripped away reams of hard-won line. Sweat dripped from his forehead, and glasses were nervously straightened as he set about dragging a sure skate towards the surface once again. The fish fought gamely, but the dive had exhausted much of the fight. Alan worked steadily and soon had the fish lulled at the side of the boat.

With the net spread out, Dale manned one gaff while I grasped another, and together we hauled it aboard. The 10/0 de-barbed hook attached to the 250lb trace, hung cleanly in the scissors of what was a substantial male common skate. Unhooking was straightforward, and we quickly photographed, measured and returned the fish using the prepared netting – a must have piece of kit. The vital statistics plotted at a very credible 115lb on the Male fish chart. Alan was all smiles.

Alan’s reel was next to signal a good run and Dale stepped up to the plate. He immediately knew he was in a proper fight, and judging from the clobbering rod crunches, Dale was attached to a better fish again. It should be noted that this was Dale’s very first skate outing and no previous experience of the situation he now found himself in.

With a few quiet words of encouragement he eventually gained the upper hand, working well and out-muscling a particularly game fish all the way to the surface at the end of a bruising encounter. A team effort again prevailed and the mighty male was boated without incident. This fish was a real cracker that dwarfed the one released earlier. With measurements double-checked and noted, we turned to the official scale. At 64 inches X 83 inches, it was a massive male, and we were surprised to discover that the actual weight was clean off the scale! Frustratingly, we could plot the wingspan but there was no data for the well-endowed length. 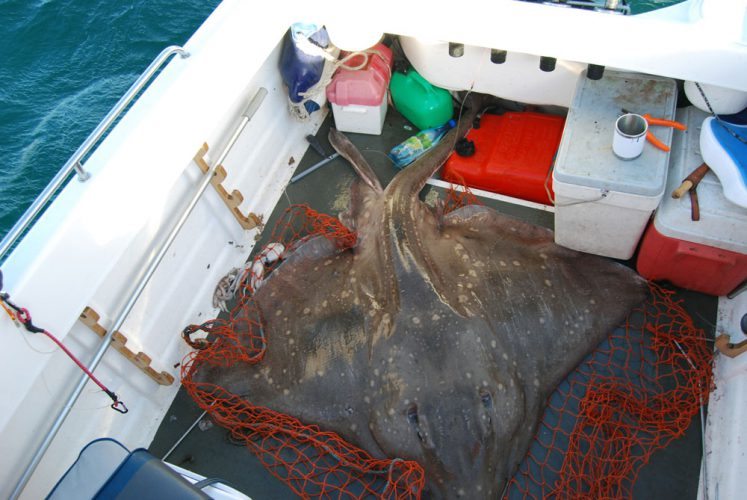 To put things firmly in perspective, a 120lb male common skate ranks as a proverbial leviathan and an impressive capture by anyone’s standards. Later discussion with widely respected common skate guru, Davy Holt, threw up an estimated weight in this instance of 150lb – which is more or less unheard of. After reviewing the photos and trawling through his personal records, Davy offered that this could indeed be the largest rod-and-line caught male skate to date. 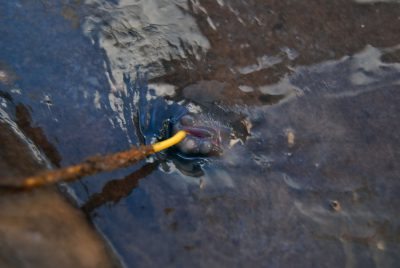 I don’t think Dale will mind me describing him as a novice sea angler. His personal best fish before this trip was a modest 7lb cod caught at Amble last year. So very well done that man, and well done to Alan too for sportingly passing the rod over. Incidentally, we landed only one previously tagged skate on the day. Sadly, as the picture shows, the tag site appeared badly infected, which sparked debate on the subject of bad tagging.

After a long day at sea we headed back in, more than satisfied. The other small boats reported two or three skate for their day, while North Star landed four fish.