Put it down to pure lure snobbery, or call me an afflicted tackle tart if you must, but it’s not that often I embrace the opportunity to try out hard lures from the cheaper end of the market. A glaring mistake I have just discovered to my shame after using some very competitively priced plugs from the Tronixpro stable. 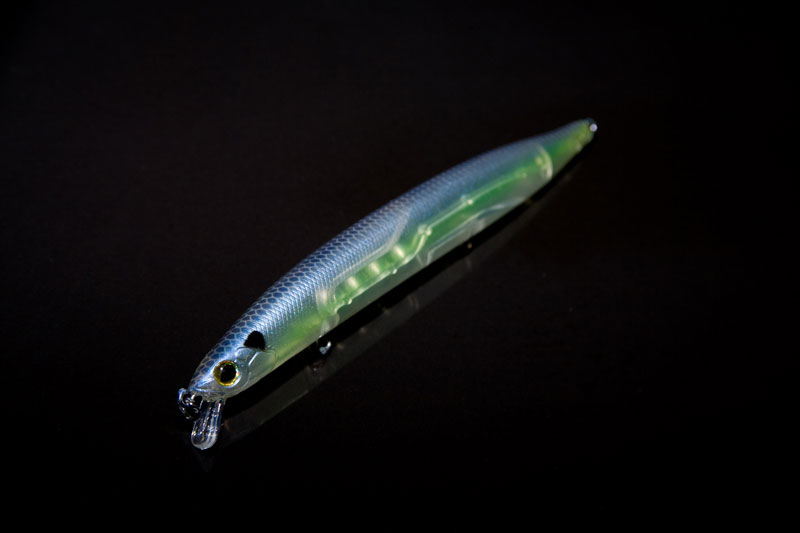 The Yokozuna range of lures that I tested recently has definitely changed my opinion of ‘affordable’ plugs. These lures tick most fussy bass anglers’ boxes and go further yet. They cast well, have good dynamic swimming actions, come in a range of appealing colours and sport a decent exterior finish. That amounts to a lot of plus points for a bunch of lures costing less than a tenner each.

With lure fishing presently in the midst of a crazy boom, there always seems to be a recurring bug amongst those who are new to the sport – and that’s the price of lures. As a lure fishing addict, I freely concede that modern good hard plastics can be expensive, and after much pain, I have trained myself to shrug off the loss of numerous £20 lures when prospecting new, or particularly rough ground. It’s not easy, but I can mostly offset loss fears against the knowledge that there are bass likely to be lurking among those nasty snags.

The Time and The Place

For newcomers or any overly protective angler who has just blown the budget on a clutch of shiny new toys, the thought of chucking £20 at some semi-submerged lure-snatcher can seem ridiculous. The irony here is that in not doing exactly that, the chances of nailing a lunker are hugely diminished. This ‘do I or dont I?’ quandry situation is, to my mind, where decent, affordable lures come right into play. Use them around gnarly ground that will scratch, maim and ultimately steal lures and the odds of catching are vastly improved, without the worry of kissing goodbye to a catalogue of extortionate items that cost a further arm and a leg to replace. 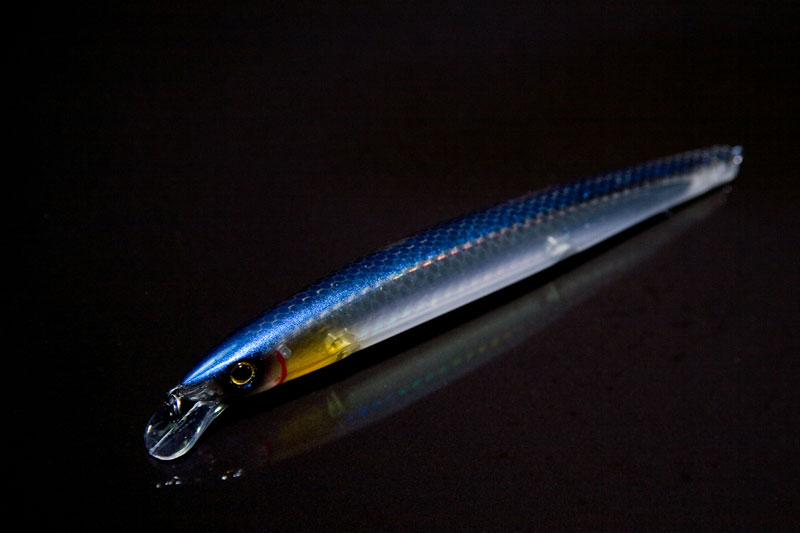 Of the new Tronixpro lures that I have tried from Yokozuna, the ‘Gitana’ and ‘El Dorado’ have stood out as my personal favourites. These little beauties work best with medium paced retrieves, interrupted with odd pauses and jerks of the rod tip. I’ll definitely be keeping a few of these in my bag for exactly those swithering circumstances where I really want to cast a good lure deep into the heart of bad ground. Think of it as ‘the good, the bad and the hard lure answer’.

Yokozuna plugs are available from Tronixpro dealers. A choice of 12 different styles plugs is offered in the Yokozuna range and some of my favourites are shown below. Full details at www.tronixpro.com 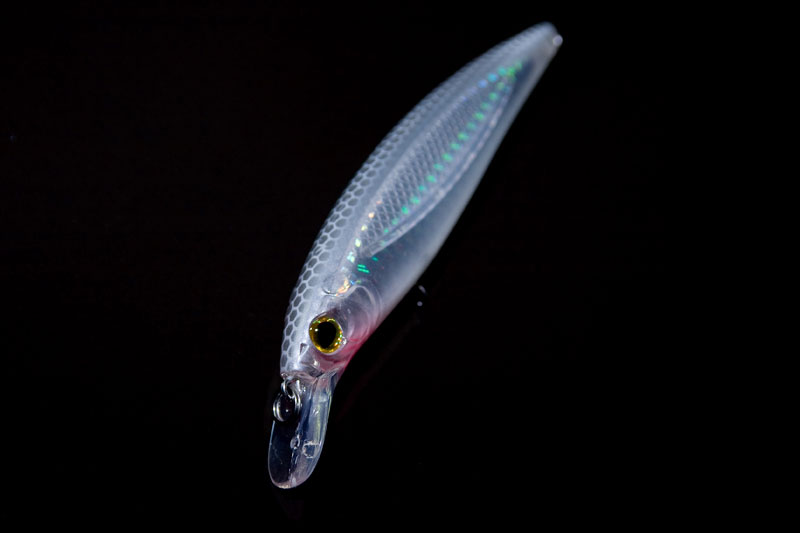 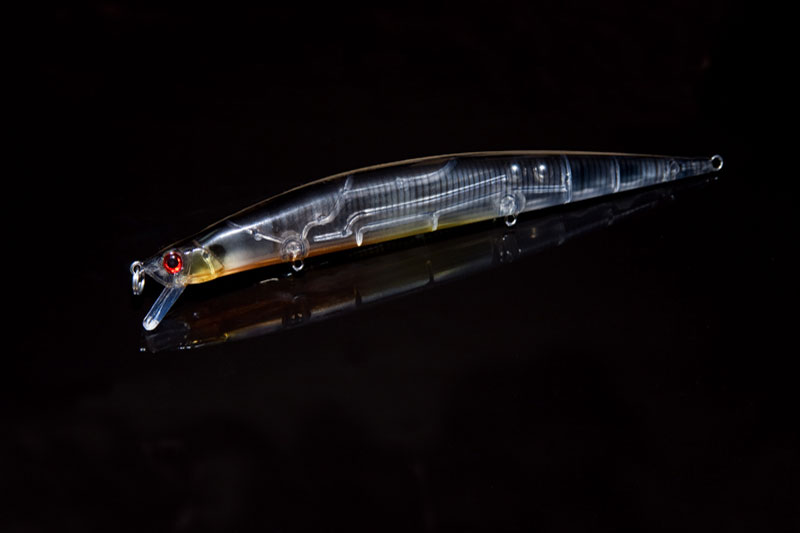 A large sway-action wobbling lure that comes in a choice of five distinctive colour patterns. The Marea Slim lends itself to a stop-start retrieval technique and is most at home over shallow, rocky or kelpy terrains. Shuttling internal weight system assists casting and accentuates swimming action. Pictured is the AF04 Marea Slim with black back, gold/bronze underbelly and black-spotted gill area with translucent sides. 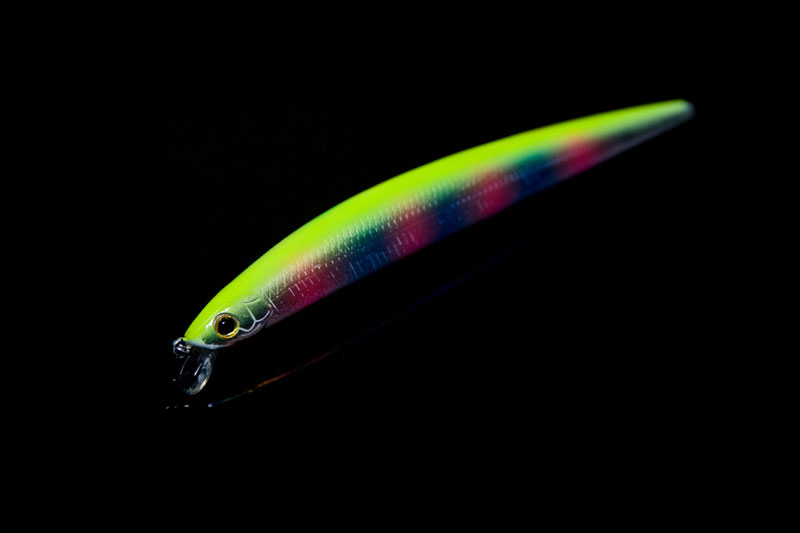 The Montero is a classy and productive bass-catching pattern. It possesses a neat agitated action that can be checked or harassed with a slow or fast wind. The magnetic casting system assists casting and a selection of five colour patterns cater for all light levels. The MA05 version here has a prominent yellow back, orange underbelly and ink, blue and pearl-splash sides. B09 (image 9 in the gallery below) is metallic green on the back, with a white underbelly and orange splash chin, complemented by highly reflective silver holographic sides and black lateral line.

A pencil-bodied hard bait with wobbling gait and prominent rolling swim action. A good casting lure which incorporates the tungsten ball weight transfer system. Available in a choice of four attractive colour options. Pictured here is the L09 version with blood head, black bag and deep holographic flanks, and B94 (2nd shot in the main text above) with the black head and gold/red pectoral area, strong blue scale-effect back and deep holographic flanks. 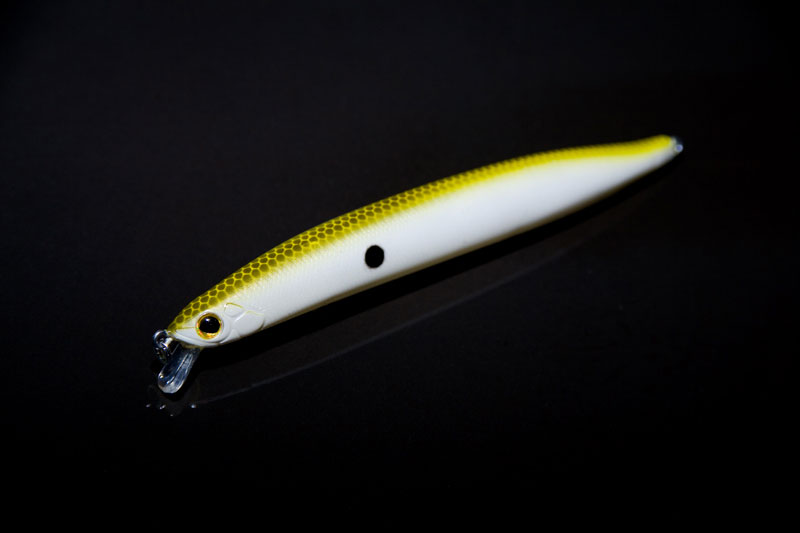 A slim, floating minnow with a pronounced wobbling, waddling action. The weight transfer system consists of four main internal tungsten balls that run to the rear when casting, and track to the front of the body cavity on retrieval. Available in a choice of five colour patterns. This S15 version has an olive scale-effect back, white sides with prominent black spot on shoulders. 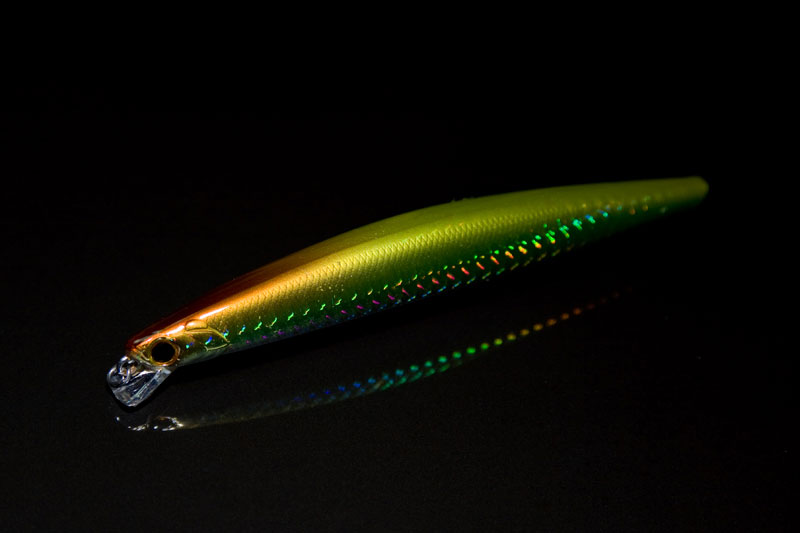 A fast actioned floating minnow available in a choice of four different colour patterns. Performs well with and interrupted ro
d twitch and reeling technique. The B43 option sports  a yellow/gold back and upper sides, running to bronze at the head, with holographic sides and white underbelly. 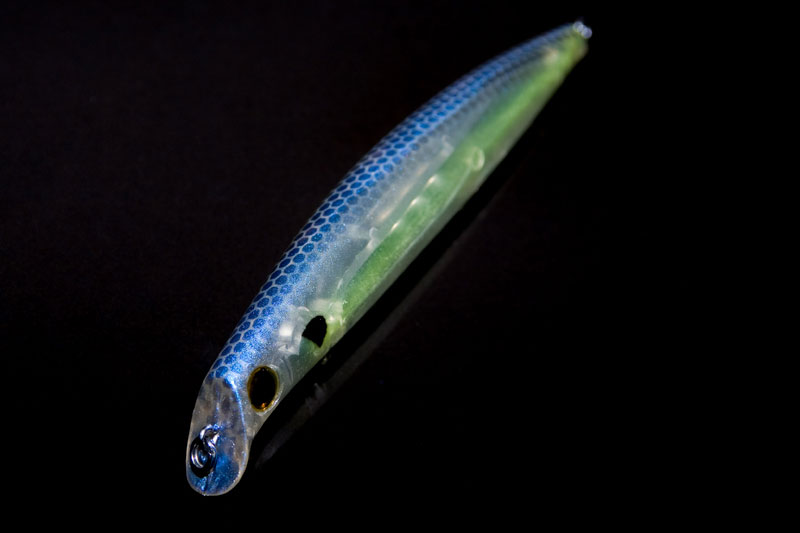 A wedge-nosed, floating minnow with lifelike swimming action. Visible locked ball bearings are set at the front and rear, with a further three tungsten bearings that track back then forward during casting and retrieval. Available in five different patterns. The CO4 version consists of a blue scale-effect back, with grey and green misted flanks and black-spotted pectoral area.