Plymouth based Tackle Company Snowbee has added yet again to its already comprehensive range of spinning gear. Planet Sea Fishing regular reviewer Des Westmore gives us his take on the new “Raptor” range of rods and reels.

Comprising seven rods from a 6’ 2-8g to a 10’ 20-50g, including an 8’ four-piece travel rod, along with three fixed spool reels ranging in capacity from 200 yards of 10lb mono to 300 yards of 10lb mono, the Raptor line-up has pretty much all the bases covered for UK fishing, including Light Rock Fishing (LRF) which has become popular in recent years. Snowbee sent me two rods and a reel to play with along with a spool of their 7kg Tuf-Line XP braid. Wherever possible I try to provide long-term tackle tests but in this case, the weather did not play ball at the time of year that I would have used gear like this so it has only received minimal use.

The reel appraised is the Raptor SW3000 that is the smallest in the range with a capacity of 200 yards of 10lb mono, and weighs in at 10oz or 280g. The two rods in this case are both 7’ 2” in length with one rated at 4-12g and the other rated at 7-25g. On paper, the rods may seem similar in purpose but the actions and styling of each one is quite different from the other. 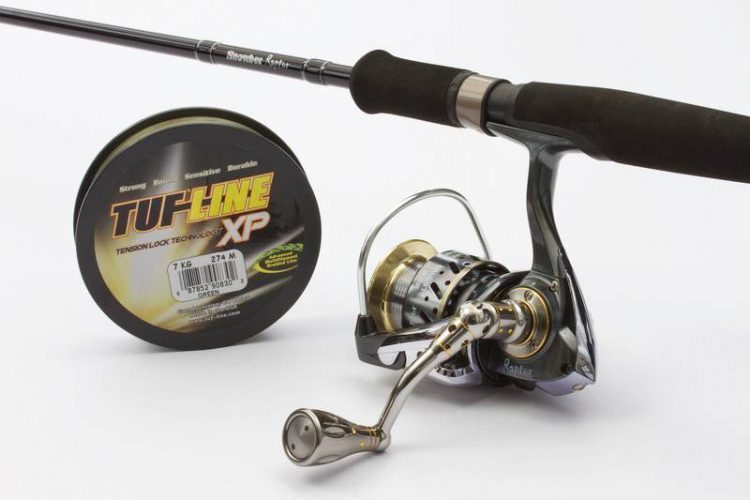 Taking a closer look at the SW3000 reel, this tidy reel seems to have everything you would expect of a fixed spool reel in its price bracket. The handle is smooth in operation, thanks in no small part to the eight ball bearings and one roller bearing used in the construction. It is also very well balanced with no hint of wobble from the rotor on retrieve. The roller bearing that is used is of the one-way design that takes care of the anti-reverse function and there is no backlash at all in the handle when the rotation ceases. The anti-reverse can be switched off if you prefer to backwind when playing a fish or allowing the lure to fall under its own weight, while the gearing is just over 5:1. 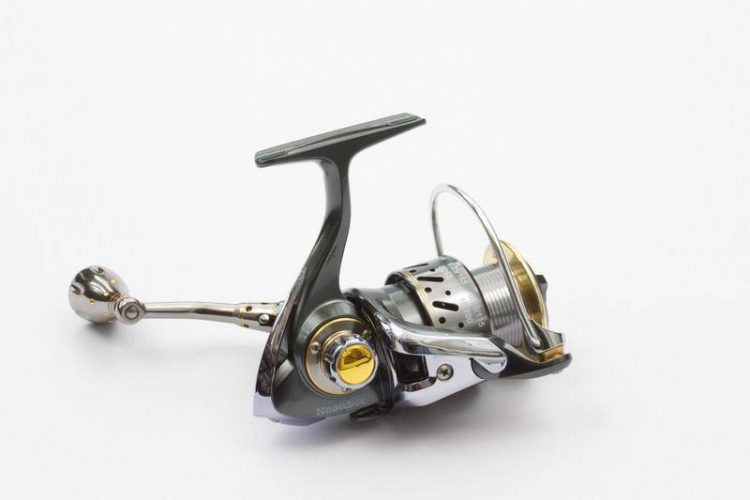 The bail arm is not a one-piece design but I would not expect it to be on a reel of this price. It is however, a sturdy looking construction and is in no way flimsy. As you would expect, the bail arm can either be tripped manually, preferred for braid use, or automatically by turning the handle. The drag is controlled in the traditional manner with the knob on the front of the spool. The washers are smooth and can be locked down to far higher pressures than will ever be required in normal use. 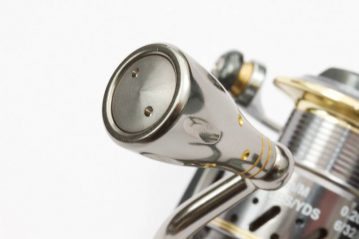 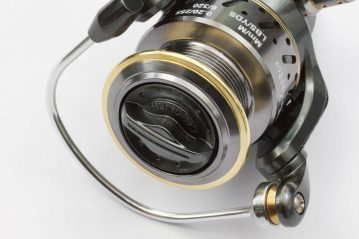 The skirted spool and handle of the reel are aluminium as is the grip on the handle. I like this feature but I do wonder if some anglers would have preferred it to have a more tactile neoprene covering on the grip. As with most fixed spool reels, the Raptor can be easily configured either as right hand or left hand wind. The rotor and body of the reel are plastic. This is fine though the silver decorative feature at the rear of the reel does look a bit vulnerable to damage. Overall then, this is a sound looking product that should reward the purchaser with excellent value for money and fit for purpose performance.

Moving to the two rods, both are very classy looking and the blanks are Snowbee’s signature dark blue. The whippings on the guides are plain dark blue while the decorative whipping near the handle is dark blue tipped with silver. Generic lined rings are used throughout with a bright silver finish. The result is much understated but still attractive to the eye. Both rods feature what looks like, at first glance, to be three EVA grips and a reel seat. In fact, the two upper grips and the reel seat are integrated into a single unit and the reel, when fitted, becomes an integral part of it. The result is that the EVA wraps round the back of the reel foot where the reel seat sits, resulting in a very comfortable arrangement. The remaining lower EVA grip will probably only be used when casting and is more than up to that task while a generous sized butt cap finishes it off. The reel is mounted higher up on the 7-25g rod resulting in a much longer lower grip on that rod. 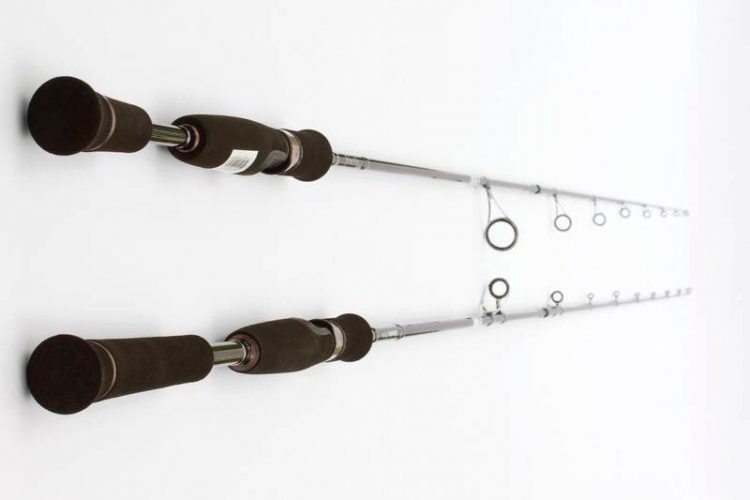 The rods are similar enough to look like they come from the same stable but are easy to tell apart because the 4-12g version uses high stand-off single leg rings throughout, seven in number plus a tip ring while the 7-25g model’s first two rings are three legged “Lowrider” style rings. The remaining six are single legged but are much smaller and lower profile than those used on the 4-12g. The result is that the 4-12g looks more like a traditional spinning rod while the 7-25g looks a bit “different”, more like the US style casting rods for multiplier use. This was an intentional part of the design because, quoting directly from Snowbee; “Our new low-profile guides, which not only provide quick ‘taming’ of coils coming off a fixed spool reel at high speed, but will also stand up to rough handling”. 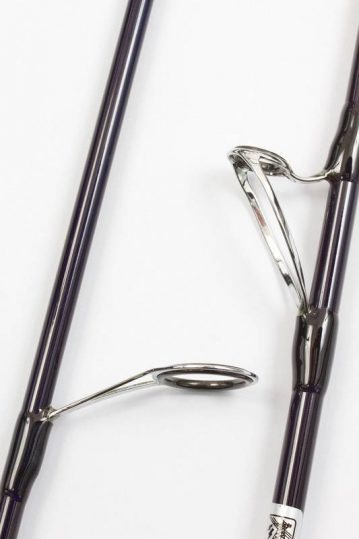 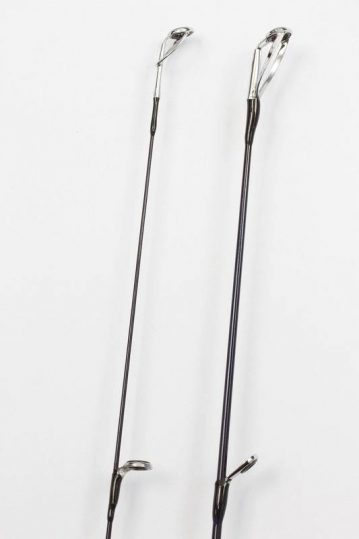 The stiffness of the two rods is markedly different. The action of the 4-12g is incredibly light and will enable the use of tiny lures when fishing. I would imagine that a single 1lb mackerel on this rod would be a riot and a six-ounce goby would give a good account of itself. Really, this is quite a niche market bit of kit and unless you aim to do a lot of ultra-light fishing or LRF, you should be prepared for the fact that you will not get a massive amount of use from it over the average season. At the price though, at least you are not breaking the bank for a rod that you will not use that often. 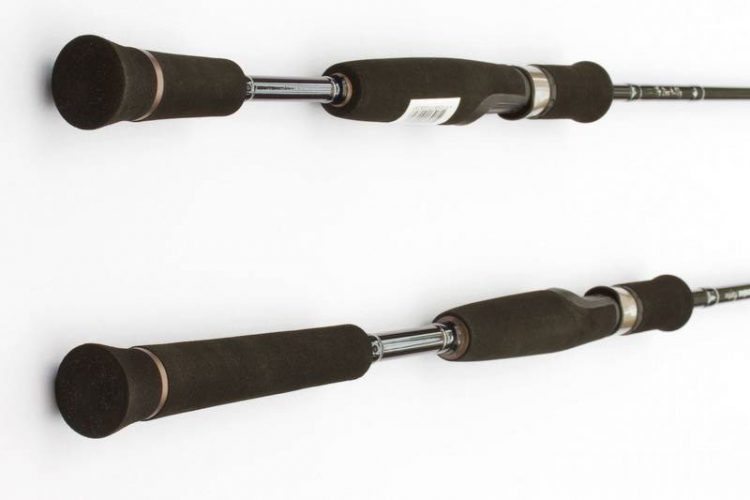 The 7-25g rod is quite a bit stiffer and could be pressed into use on far more occasions. As well as the spinning that it was designed for, this rod could also be used in a boat for light bottom fishing for the likes of bream or drifting for plaice on snag free marks. I can certainly see these rods and reels having the potential to add another sporting dimension to your season.