A heavy northerly swell over the past few days has brought a huge improvement for shore anglers with many marks producing cod to 8lb or more. Middleton pier at Hartlepool, always a good bet for a big cod in heavy seas, saw cod of 8lb and 10lb taken early last week when the sea was at its heaviest. North Gare also saw some big bags of fish with some anglers reporting bags of up to 20 cod during the right conditions. The Staincliffe has been a bit hit or miss, but again has produced bags of up to six cod, in the right conditions, on a falling tide. A nice big hole to the south of the Staincliffe has also been productive mainly on a nighttime tide. At other times however, all of these marks have only produced the odd cod or the inevitable whiting, and it is those anglers who have chosen their fishing times carefully to coincide with the more favourable conditions who have seen the better rewards. The promenade has been unusually quiet with just the occasional cod reported but there is always the chance of a bigger fish here over a big high tide. The rough seas have obviously washed a lot of bait out with caught cod being full of lugworms, whiteworm, crabs and sandeels. Similarly, Parton and Crimdon have also been unusually quiet; the main concentrations of cod seem to be inside Teesbay itself. 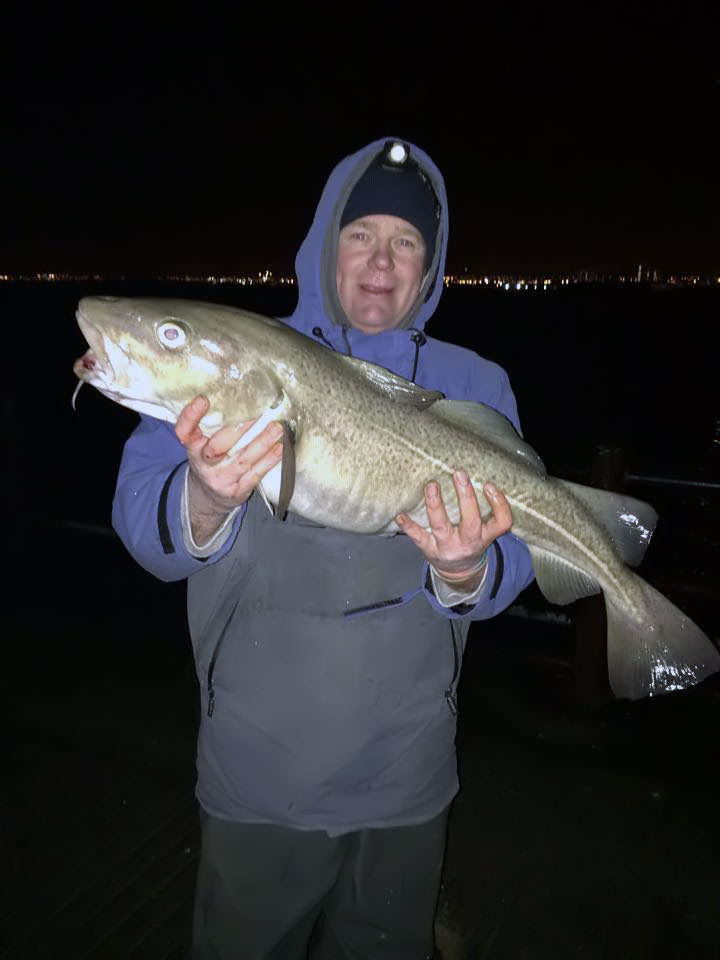 NESA member Wayne Gleaves landed a cracking cod, pictured above, of 13½lb over the weekend. Wayne fished Roker pier and was rewarded with the magnificent fish using his Greys Nitra coupled with an Abu 6500 mono-magged Rocket reel, and a standard 6/0 Sakuma pulley rig baited with a cocktail of yellow tails and ragworm.

The Durham beaches have seen some mixed bags of cod and whiting landed when fishable, but many anglers have tended to fish at the sheltered marks inside the Wear and Tyne, and from Roker and South Shields piers when possible. All of these marks have seen bags of up to 20 cod with specimens to 10lb reported from South Shields pier. Rathouse Corner in the Wear has been very productive in heavy seas with anglers taking up to 17 cod from the corner and along the inside beach. A bit of a south-easterly sea over the weekend saw catches drop off along the Durham beaches and into Hartlepool as is often the case, but easterly winds and some of the biggest tides of the year later this week should see the cod move back inshore and hopefully in bigger numbers.

The rock edge and beach marks north of the Tyne tend to fish a bit better in a big southeasterly sea and this is where the better bags of cod were taken over the weekend with Whitley Bay beach and Blyth beach the top marks when fishable. Some clubs had to cancel their matches when the sea was too rough.

Alan Wood fished the Sheltered Boathouse Bay to win a Whitley Bay match with three cod for a total of 3lb 9oz. Chris Stringer won another with six cod totalling 11lb 9oz, followed by Gary Wilson with three for 5lb 6oz. Phil Smithson had three cod weighing 12lb 3oz, including the best of 7lb 13oz taken at Blyth to win a S.B.R.A.A.C. Match, and Lee Mains won an Alberta match with two cod for a weight of 7lb 14oz, the best weighing 5lb 10oz, from Lynemouth.

The last Seaham Badger heaviest fish Open saw 11 out of the 29 anglers weigh in 18 fish for a total weight of 30.24lb. Gary Blanchard had the best bag with four fish for 7.63lb; this included the overall heaviest fish of 3.27lb taken from Seaham Hall beach. Andrew Morrow had the second heaviest fish, a cod of 2.40lb, and Lee Burton had one of 2.17lb. The Ryhope Tuesday evening sweepstake saw Ritchie Carr win with a cod of 5lb 2oz followed by Lee Burton with one of 3lb 5oz. Fifty one anglers fished the Ryhope club match on Sunday in very testing conditions, those who persevered at the rock edges managed to pick up a few cod, and those who headed for the sheltered rivers found the whiting and flounders feeding. Chris Hossack won with six cod for a total of 7.810kg, the best weighing 1.59kg, taken at Whitburn. Chris Coxon had three cod weighing 2.61kg from the Targets, junior Ryan Taylor was third with a six whiting bag of 2.24kg, and Colin Smith had the best flatfish at 0.70kg.

If you are not a cod fanatic then the upper Wear continues to produce bags of over 20 flounders looking for ragworm and mackerel baits with the odd bigger specimen topping the 2lb mark among them.