The casting and fishing worlds are buzzing with talk of just how good the new TG-F1 reel really is. Dutch surfcaster, Chris Banham travelled to the UK where he tested the reel and talked to Tony Gittins, the brains and the muscle behind this mini masterpiece of engineering.

It is highly unusual for a small, specialist company to take the plunge and commit to full scale production of a top-end reel. But faith in this particular fishing product was such that company owner Tony Gittins had no hesitation in pressing ahead with the initiative. Tony Gittins kicked off TG Developments in the mid 1970’s with Rocket Fuel reel oil, progressing to supplying ceramic bearings, and latterly ultra lightweight spools for ABU 5500 and 6500 reels. A local engineering firm then machined custom cages for TG, and from there it was a natural progression to manufacture a very special complete reel – the Rocket Reel Company TG-F1. 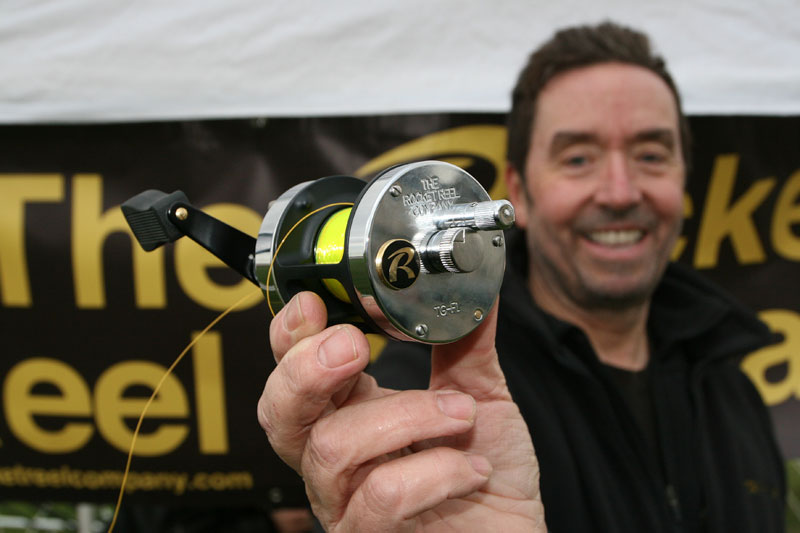 Seldom has a product created so much early interest, so I felt compelled to visit Tony Gittins personally at home in Lowestoft to talk to the man behind it all, and to trial the TG-F1 for myself. Tony greeted me warmly and discussed the TG-F1, its roots, and the company history over several cups of tea, before leading me to the beach to trial the reel for real.

TG-F1 reel cages are CNC milled in a complex process which has drawn serious attention from industry as far flung as Japan. End plates are chrome-plated brass to minimise corrosion risk, and after rigorous testing of various potential materials, aluminium phosphor bronze was selected for the internal gearing. The cage is ‘low seated’ for easy thumb grip during casting. The left hand end plate includes an adjustable, single magnet ‘knobby’ casting control, while internally, a concave brass fitting ensures the spool is always centrally located. End-float spool adjustment is on the right-hand side, with the spool located on a spindle, mirroring the classic ultra-cast design. Most noticeably, instead of a star drag wheel there’s a screw-on/off tensioner knob. While not new, this style of drag control is unique among modern beach reels. 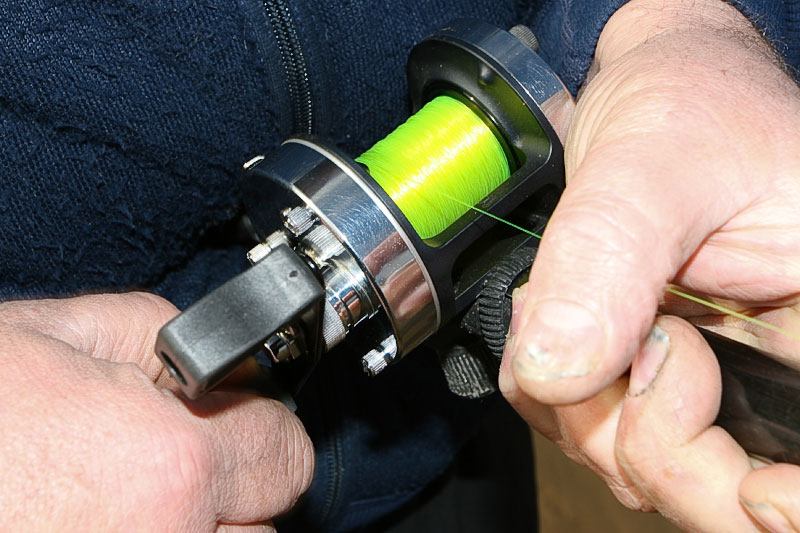 Carbotex ‘smoothy’ washers ensure a sensitive drag. The general reel dimensions match those of the famous ABU 6500 multiplier. Gator grips are used on the handle, and a stainless steel handle shaft has been introduced.

Chris: How long has it taken to progress the TG-F1 reel from the initial idea to full production?

Tony says: Believe it or not, it has taken around 20 years! When we introduced Rocket Fuel we supplied Abu Garcia in Sweden, who used it in initial assembly of their reels, and they also included a bottle of RF oil in the box with every new reel purchased.

Chris: What, in your opinion, sets the TG-F1 apart from other reels on the market?

Tony says: Although many tournament casters are very taken with the TG-F1, we have designed this reel firmly with fishermen in mind. The thinking was to create a trouble-free reel capable of big distances, but one that all anglers could get along with. Setting my own thoughts aside, if the level of positive feedback received is any gauge then I believe we have achieved what we set out to do.

Chris: What do you a recommend as the ideal line for use on the reel? Do you firmly advocate mono, or is there perhaps some leaning towards braid?

Tony says: Mono is our first choice, but with so many new lines coming onto the market it is possible, in the future, that a coated braid line will cast better. For the moment however, I would recommend Ultima PowerSteel Fluorocarbon in 0.35mm/9kg, as it is non stretch, super soft and high strength… it is lovely line to fish and cast with.

Chris: Why do you think multiplier reels are not popular on the Continent?

Tony says: I believe that fishermen on the continent, given a choice, will go for a fixed spool reel. The simple reason is that they are easy to use and certain multipliers are seen as fraught with hassle. A reputation for inexplicable bird-nests has attached itself to multipliers generally. Times have changed however, and better design and the wholesale uptake of simple magnetic braking has seen the multiplier evolve into a much easier to use reel. Shore anglers now have no reason to fear multipliers.

Chris: Do you think continental anglers will rethink their approach to shore fishing and change their opinions on reels in the future?

Tony says: I would like to think so as this would give the continental fisherman another weapon in his arsenal to catch fish feeding further out from the shore.

Chris: We often read in magazines about anglers and casters stripping reels down after every outing and carrying out all sorts of time consuming reel maintenance. Does the TG-F1 require much regular attention to keep it in good working order?

Tony says: After a fishing session, rinse your reels under the tap with warm water, dry them out thoroughly and oil the spool  bearings with one of the Rocket Fuel oils. More than that is unnecessary to ensure a long and trouble-free working life.

Chris: What is the Rocket’s gear ratio?

Tony says: The reel’s ratio is 5.3:1, which is the ideal retrieve for beach fishing and a casting multiplier of this size.

Chris: Given the latest generation of new casting rods and reels, would you say that 100 metres should be achievable for any fisherman?

Tony says: Nothing in fishing is guaranteed but with our TG-F1 reels, some casting practice and a half decent rod regular casts over 100 metres should be much more than a possibility. 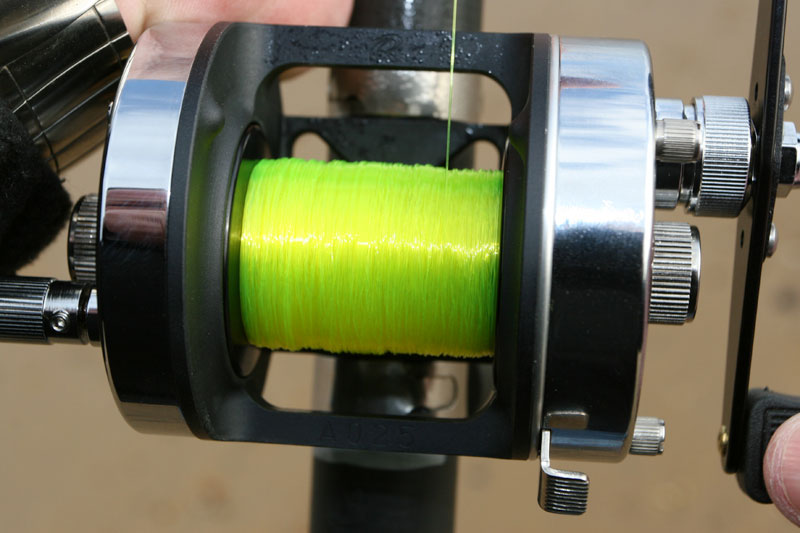 While huge distances have been cast using the TG-F1 on the field and beach, Tony is at pains to stress that the reel has been designed for everyday use by match and pleasure anglers, and there are no special skills required to cast well with it. The beach was only five minutes from Tony’s front door and carrying a pair of well used Zziplex ‘fishing’ rods with spanking TG-F1 reels attached, we headed out to properly put them through their paces.

The first reel I tried was the raw standard model with a 150g lead. I set up to cast off the ground, and took it easy, not wanting to embarrass myself up by blowing up on the first cast. Under the scrutiny of Tony, a touch of nerves still got the better of me and I nearly made a pig’s ear of the first cast, forgetting to depress the spool release – what a dolt! At this point I should perhaps point out that spool release is very positive, and the magnetic control knob is just the right size for comfortable ‘blind’ location/operation should you want to back t
he brake off or on with the lead in the air.

Initial butterflies mastered, I soon had the lead flying with a very simple OTG cast employing very little turn of the body. The reel is a serious zoomer but easy to control and my confidence kicked right in after just a couple of casts. The other thing that struck me was just how quiet the reel is in full flight. Unstressed and unflustered might better describe the feeling – totally unlike many of the very popular beachcasting reels from the big players. The reel did not take much getting used to, and I worked through an extensive set of casts covering the most basic of overhead casts, through to a more full-blown OTG with the 150g lead set inside the rod tip on a modest drop – all went off without a hitch. 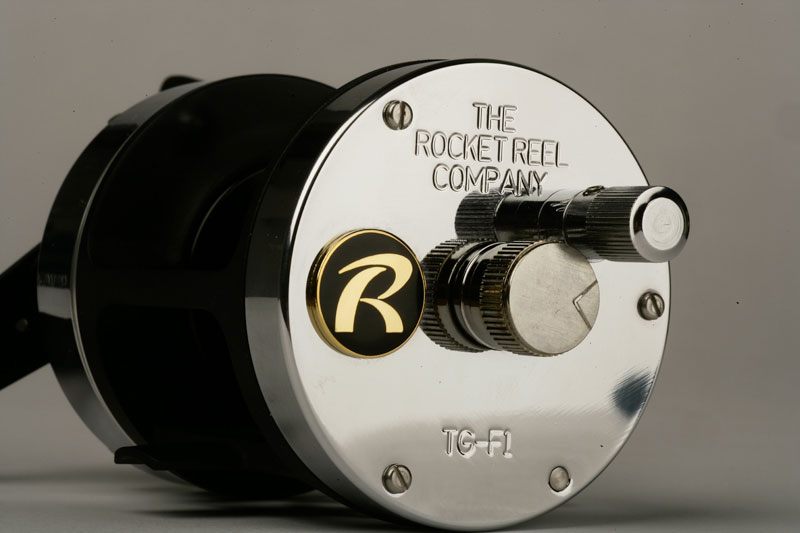 The second Zziplex rod sported a TG-F1 reel that had been ever so slightly tweaked. Tony did not reveal exactly what had been fiddled, but said to give it the lot and go for bust. He promised I wouldn’t have any problems, so this time I hammered a 175g lead as hard as I could. Again, the reel was eerily quiet – so quiet in fact that I had to look to check that line was actually spilling off the spool… and boy was it! After twiddling the mag control knob I noticed the spool was nearly empty – for me, that was quite a cast! The double paddle, Gator Grip handle compliments the reel well and takes some of the pain out of winding in 175 metres of line.

I kept casting and retrieving until my arms hurt. And in that time I tried everything to catch the reel out… but failed. Even when I snatched the cast, or got the timing wrong the TG-F1 rolled with the punches and forgave my errors, delivering clean release and unerring smooth line flow repeatedly. You might note that I do not talk about ‘pendulum’ or ‘power casting’ through this report, and that is simply because I wanted my handling of the reel to be representative of 99% of the beach fishing public, rather than just those with already well honed casting techniques. My hands-on experience firmly underlined that there was no need to employ more exaggerated casting styles to achieve excellent fishing distances with the beautiful TG-F1.

To the best of my knowledge this is the first casting multiplier reel to be engineered and manufactured exclusively in the UK. With an almighty £345 price tag this superb piece of engineering may be beyond the financial reach of many anglers, which really is a pity given its user-friendliness and magic performance. 40 years of fishing have taught me many hard lessons, one of which is ‘pay peanuts – get monkeys’. This is particularly true of beach fishing reels. For me, the TG-F1 is a true high performance item that will improve the fishing distances and enjoyment of so many anglers, from the everyday fisherman right through to those at the top of the game. I believe this reel is well worth the investment, and I give it an enthusiastic thumbs-up to anglers in the UK, Netherlands and beyond. 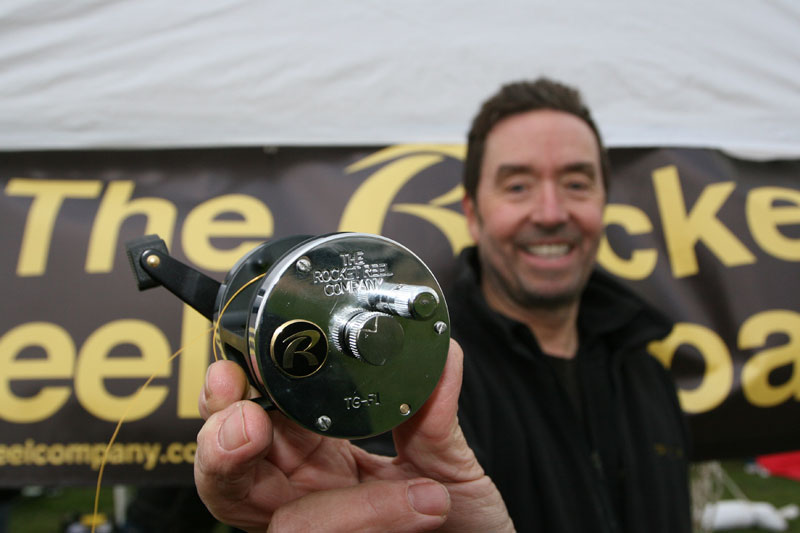 Thanks to TOTAL SEA FISHING magazine for their assistance with the photographs for this item.