Des Westmore takes a look at the appropriately named Santiago big game reel from Fin Nor and discusses the reel’s background, the world famous brand, and the future with Zebco’s Director of Marketing, Ray More.

Back in October 2008 I visited the IGFA museum in Dania Beach, Florida. The museum has loads of fascinating exhibits but one that particularly drew my attention was the ‘Mighty Marlin’ display. The subject of the display is the IGFA all-tackle record 1560lb Black marlin caught by Alfred C. Glassell Jr. off of Cabo Blanco, Peru on August 4, 1953. This is still the largest Black marlin ever caught and the display incorporates not only a life size cast of the fish, but also the mighty tackle used to catch it. The rod is a cane-built ‘Bimini King’, while the reel is a classic Fin Nor. This reel features a cork drag plate that is bonded to the end of the spool and controlled by what is, when compared to modern lever drag reels, a tiny quadrant lever. A giant fish of 1560lb, a cane rod, and a cork drag: By now you should be getting some idea of what a magnificent feat of angling skill this capture was. 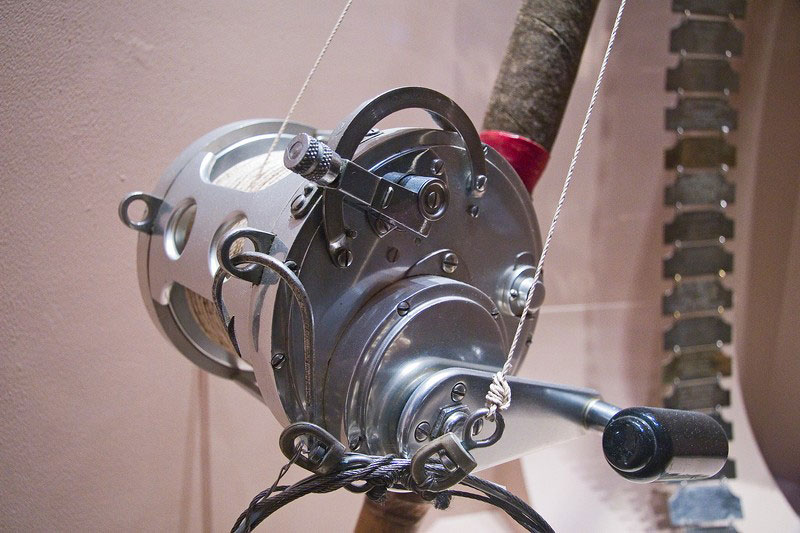 Sadly, Alfred Glassell died four days after I visited the museum aged 95. He was inducted into the IGFA Fishing Hall of Fame in 2001, joining the likes of Ernest Hemingway and Zane Grey. Incidentally, in addition to his world record catch, Glassell was the first angler to boat a Black marlin over 1000lbs; for seven years he was a member of the US team partaking in the International Tuna Cup matches, serving as captain of the 1952 second-place team. He also led many scientific marine research expeditions.

Footage of the capture of the 1560lb Black marlin was used in the classic 1958 film version of Ernest Hemingway’s novella ‘The old man and the sea’ which starred Spencer Tracy, with Alfred Glassell acting as a special advisor for the fishing sequences. For those that don’t know, Hemingway’s novella tells the story of an epic battle of wills between an old fisherman and a giant marlin said to be the largest catch of his life. The fisherman, named Santiago, has gone eighty-four days without catching a fish and on the eighty-fifth day sets far out to sea alone in his skiff where he hooks a huge marlin that takes him three days to land single-handed. Unfortunately, during the trip back to shore sharks attack the marlin, which is strapped to the skiff, and by the time Santiago reaches the shore, the marlin is little more than a skeleton. This meagre summation does scant justice to a fantastic story and literary masterpiece that every fisherman should make a point of reading. 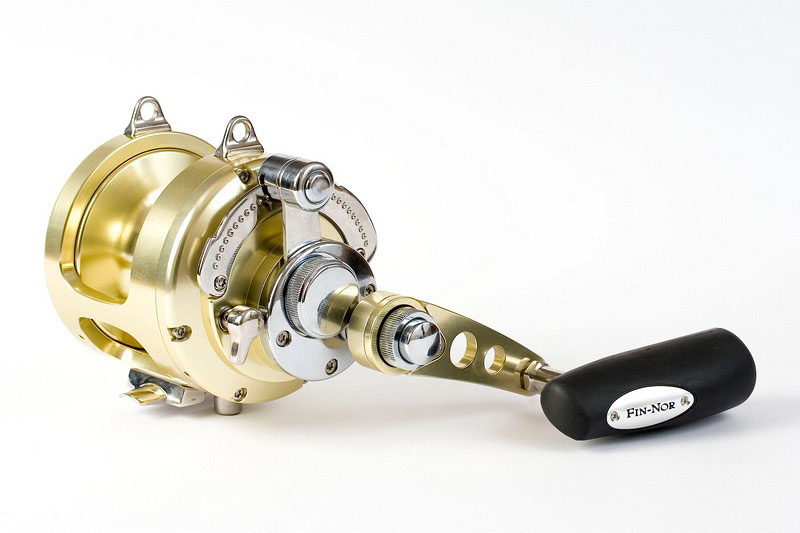 Fin Nor reels were conceived and created in a machine shop in Miami, Florida, and when Alfred Glassell hooked and landed his world record marlin in 1953 using his reel, they had been sold for 20 years. They have now been available for over seventy years, and been the reel of choice of big game fishing legends such as Michael Lerner, Tommy Gifford, Ted Williams and of course, Ernest Hemingway. And if powerful endorsement were ever needed, within that span of years, fishermen have pulled the largest fish of its kind from the ocean on an incredible 380 occasions using a Fin Nor reel.

The Fin Nor brand is now owned by Zebco which is a division of the W.C. Bradley Company. A number of new reel models have been recently developed, among them is Fin Nor’s new big game reel. The name of new reel needed to do justice to the brand’s history, and ‘Santiago’ does just that. I had the use of a Santiago SA25, which is the smallest in the range and carries a RRP of £752. While technology has leapt on since 1953, Fin Nor have managed to aesthetically dress the Santiago with a look rooted back with the reel I saw at in the IGFA museum. 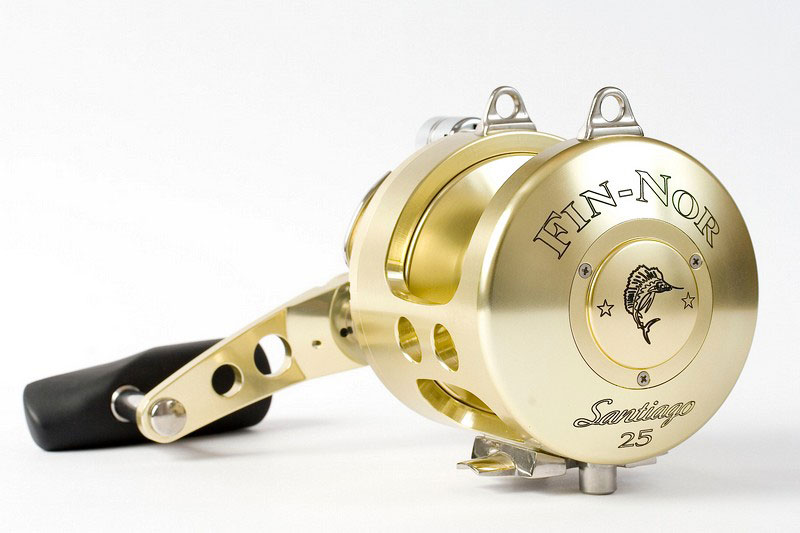 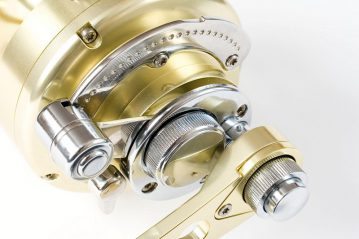 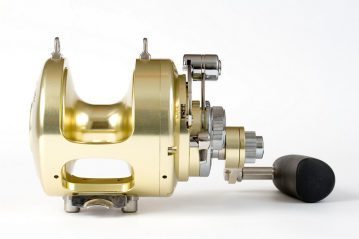 The SA25 has a capacity 480 yards of 25lb mono. It possesses push-button two-speed gearing of 1.75: 1 and 4.15:1, features a machined from solid one-piece frame, forged aluminium spool, four ceramic hybrid bearings and weighs a whopping 1915g. The Santiago has a newly developed carbon and stainless steel drag, factory set for 17lb at strike but 40lb at strike is available while maintaining free spool, which gives 60lb at full lock-down. Shark, common skate and big conger would be the UK species that come to mind for this reel. Fascinated by not only the reel, which is a work of art, but also by the story behind it, I put my questions to Ray More, Director of Marketing for Avid Brands at Zebco:

Des: “Is the Santiago a brand new reel design or an evolution of a previous model?”

Ray: “We designed the Santiago being respectful of the fine tradition and look of the original Fin-Nor big game reels, but at the same time, we knew that it had to have more modern materials, features and function. On the traditional side for example, we tried to keep the same gold anodized colour, the same two-hole pattern in the cross bar and the sailfish badge on the left-hand side plate. But we knew we needed to be more modern in the materials. The reel is therefore constructed from top-quality aluminium and stainless steel. The drag set-up is a stainless steel plate sandwiched by modern carbon fibres for the best in drag strength and smoothness.”

Des: “So it is then, an evolution. What reel did it evolve from and what are the improvements?” 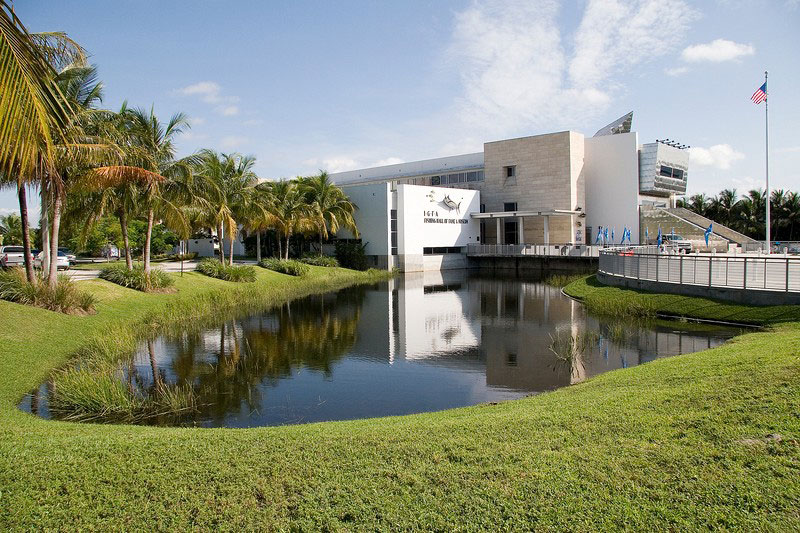 Ray: “We looked at the original Fin-Nor big game reels including the famous Tycoon and Ahab versions. We also looked at all competitive reels out in the market to see what they had improved upon and at what still needed to be addressed. One of the biggest changes is the anglers desire to put larger line weight on smaller reels. Modern small diameter braided lines have pushed this trend – often today a ‘30’ size reel uses 100lb strength line. This means centre shafts, spools, gears and drags all have to be built to handle this formidable stress. The Fin-Nor Santiago takes into account this and other new techniques that dictate the need for a different / better reel today than ever before.”

Des: “Why was the decision taken to develop the Santiago, and what are the new features that it brings that the previous model did not have?”

Ray: “The trend to heavier lines on smaller reels, the desire for more top-end drag and the more prevalent use of two-speed gearing have all been built into Fin-Nor Santiago. Comfort and ease of use is also important. The Santiago has a newly designed handle knob that is the most functional and comfortable in the market. Santiago’s easy push button/twist dial two-speed mechanism is extremely easy to use and makes using reels more logical.

We are proud to be the new stewards of the Fin-Nor brand. Building on the brand’s legendary status and being able to incorporate newer materials and engineering will make this brand as important in the future as it was in the past. The legend of the brand will continue, and we will strive to re-establish it as the premier saltwater brand, worldwide.”

In addition to the Santiago, which is clearly a niche market in the UK, Fin Nor have developed some more reels (pictured below) that should meet the average UK angler’s needs head on. They are in test at the moment and you can catch up on the findings shortly. For information on all Zebco products visit www.zebco-europe.com 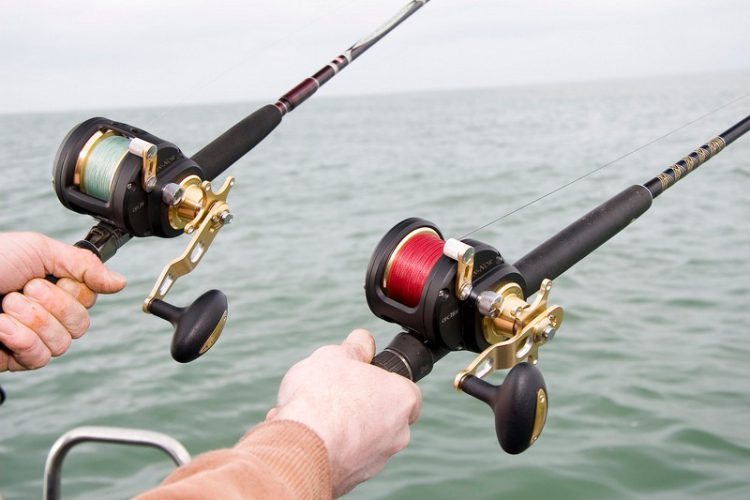