It’s mid-September and the shore sport is hotting up on the Island. We are experiencing some good plug fishing for Bass with fish to 5½lb and this will now last till the end of January. Bags of up to eight fish per session have been recorded this week. One of the biggest surprises was for Bristol lad Mark Roberts who was fishing the rather sedate waters of Braye Bay, which forms our harbour here, when he hooked a dinner plate sized turbot on his soft plastic lure.

Bass are also falling to ragworm baits on the bottom but better sport can be experienced using a spinning rod loaded with braid and retrieving a lure through the shallows and tide rips of Alderney! Having said all that the best fish fell to mackerel bait fished at dawn, a corker of 12lb 9oz which was a personal best for Matthew Smith. 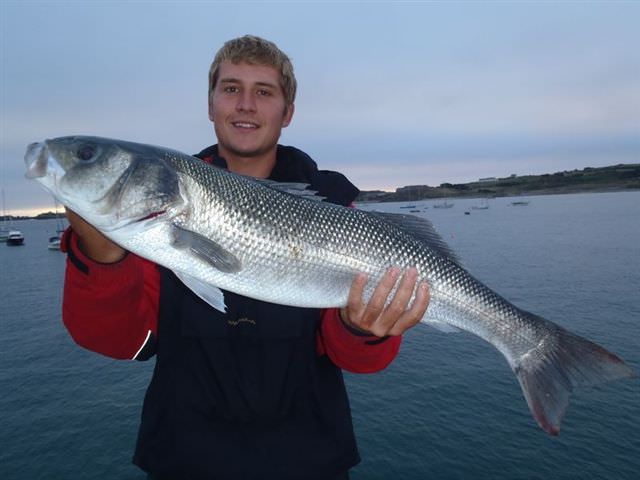 Mullet are around in fair numbers as well. It’s early for them so no really big fish yet but plenty of sport around. Normally as a by product of fishing the floated bread method we experience some terrific black bream fishing too. Very few have shown up so far and those that are here are smaller fish. By far the best fish fell to six year old Zac Eastwood when out fishing with his dad Chris. The duo had several fish and Zac’s best weighed 2lb 10oz.

The past couple of weeks have seen a mini plaice resurgence with several being caught. Red mullet have started to show and sole also appearing in increasing numbers. No biggies reported yet but fish to 1lb 8oz have been caught. Gilthead bream are also being taken from the shore together with the seasonal Couches bream. Interestingly the scuba divers and snorkellers have reported several largish shoals of White Bream. The bigger stuff reported include bull huss in to double figures and eels to 30lb.

Boat sport is simply superb. It’s at this time of year that I do plenty of plugging afloat and last weekend we managed fifty plus bass on the lures over two trips. Also we had twenty to thirty pollack, several Gars and a solitary wrasse. Anchoring up on the neap tides has seen a smattering of black bream, plenty of red and tub gurnards together with conger, blonde rays, huss, codling, turbot and tope all over the same ground.

On another trip on two consecutive drops I had a 50lb plus eel (my fishing partner said 60lb) and next drop a blonde ray touching the 30lb mark on a 15lb Ugly Stik. I think I started my last report last month how I love this time of year, the quality of this fishing makes it obvious why. Amazingly the turbot are still running strong, with one or two brill in among them. Plenty of bass on the spring tides with fish to 9lb reported amongst catches of thirty to fifty fish per tide.

The Fisheries Consultation is continuing and things are looking good as far a protection of the Island’s stock goes. There’s still time to make your views known and if you’ve not filled out a form you can go to my site and make your contribution to the process. It will conclude soon and whatever regulations are produced will be very interesting.

We’ve got some fantastic fishing going on here and with the island just three miles by one mile access is easy to all coasts so why not spend your hard earned cash on a decent break here and step back in time with the local laid back attitude Alderney has to offer and its great fishing. We have our annual Festival in the month of October too, take a look at my site www.alderneyangling.com and go to the latest report section for the updates as it happens.

In the meantime thanks for reading this far, thanks to those of you that do contribute to our economy at this difficult time for everyone and we hope you found it worthwhile that you visit again.