All-round angler Dave Proudfoot can break tackle for fun and doesn’t mince words. Here he does his best to knock seven bells out of Daiwa’s new Saltist 20H shore reel. Find out how it shaped up.

With a shore fishing trip to Iceland looming it was time to splash out on a new casting reel. Daiwa had just started shipping the Saltist 20H to the UK, and with good early impressions filtering in from around the country, my interest was perked. Although the Saltist is slightly more expensive than other shore reels, I was content to invest my cash having used and abused one of the Saltist brother boat models for a couple of years. Thanks to the power of Visa the new reel was soon in my hands courtesy of Veals Mail Order.

The Saltist range features what Daiwa describes as “full-metal jacket” construction in the shape of a solid one piece aluminium frame. In the 20H the spool spindle sits on two corrosion resistant shielded ball bearings and the reel has two further ball bearings and a roller bearing in the anti-reverse system. 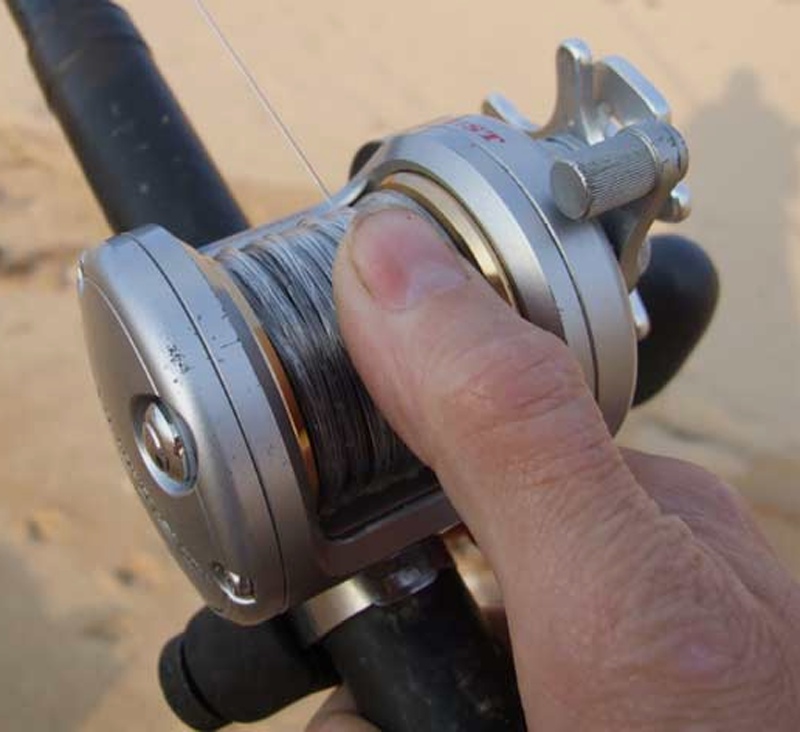 Featuring a centrifugal braking control system, the reel is supplied with two different sizes of brake blocks. Blocks were found to be pre-installed, unlike some other Daiwa reels that in my experience have required blocks to be fitted before use.

Drag washers are grease-impregnated carbon cloth, while the star drag is large and adjusts with audible incremental clicks. The main difference between the Saltist range and the much more expensive big brother Saltiga range of reels is the Saltiga is formed of machine-cut aircraft-grade aluminium bar stock. The Saltist frames are cast aluminium.

The first word that sprang to mind when I removed the reel from it’s box was ‘gorgeous’. The reel just oozes class and feels a substantial, well engineered piece of kit. Both the drag and the gears feel as smooth as silk when winding, and there is absolutely no back-slip in the handle.

Three screws on the end plate give easy access to the brake blocks using the supplied tool… and I couldn’t help dismantling the reel for a look inside. I have found spool extraction and side plate re-alignment a bit fiddly with some Daiwas, but this is definitely not the case with the Saltist which slots together and clicks into place beautifully. 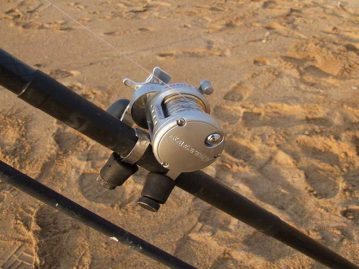 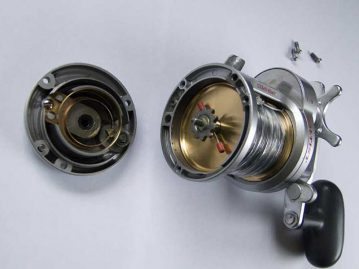 This is a reel very similar in size to the Penn 525 but with a superior line capacity and vastly superior cranking power if the product blurb was anything to go by. It would be perfectly at home with 0.35 mono and a suitable casting leader, but with my jaunt to Iceland in mind, I plumped for 30lb Ande Tournament mono straight through. Thereafter the reel was clamped to the rod straight from the box with no clever tweaking or tuning. I went to work with a five ounce lead and simple overhead cast .

A slow uncomplicated overhead cast sent the lead sailing out to sea: line disappearing off the spool without the slightest hint of fluffing. The only time my thumb touched the spool was when the lead hit the water. Another half dozen casts went the same way, which was a surprise as anyone who has seen me cast will know, it’s almost unheard of for me to get a lead away without some sort an overrun – even on reels that I’ve ‘tuned’. The low seating on the blank and small profile of the reel meant it was no problem clamping my thumb down fully over the spool. My thoughts here are that those anglers who don’t get on with the Daiwa SLOSH reels for reasons of the impeding gear box, and poor spool purchase due to the symptomatic high elevation on the blank, will have no such problems with the Saltist 20H & 30H versions.

So far so good then, but the real fishing trial would be in the cold, clear waters of Iceland, where I would be pier, beach and rock fishing for a variety of different species. Day one saw me on a pier that our guides promised would provide more fish than we had seen in a long time… they weren’t kidding! 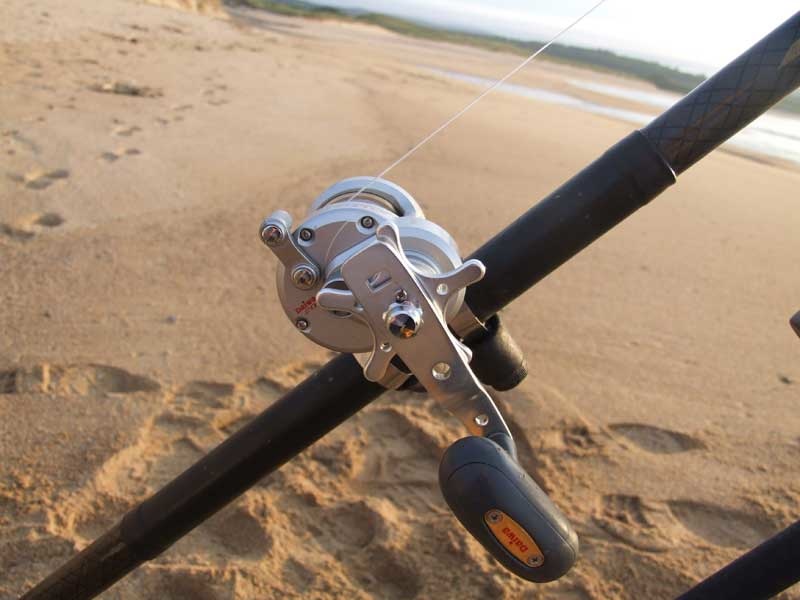 Having set up the 20H reel on a Shimano Antares beachcaster I found the same lazy overhead cast easily put me into fish that seemed to be crawling up the line within seconds of baits hitting the water. Huge dabs to over 2 lb were everywhere between 5 and 75 yards, while codling averaging around 3lb featured more regularly that bit further out. I was using a simple two-hook flapping rig and spent the next several hours hauling in double-shots of cod and dabs until I collapsed! Throughout this workout the reel never missed a beat, and although the ground was generally snag-free, I was supremely confident that the 20H would breeze even the most vicious ground.

Uptide boat anglers and shore conger hunters take note. My next mad move was to stick the Saltist on my Tournament Global boat rod. I was able to comfortably cast and find fish at the 70-75 yds range, again without any birds nest problems. None of the fish were big enough to trouble the drag, but the retrieve was smooth and the fast 6.1:1 ratio meant that I was able to get most of my fish over a nasty ledge on one of the marks we fished. There can’t be many reels that genuinely recover over a metre of line at every turn of the handle. 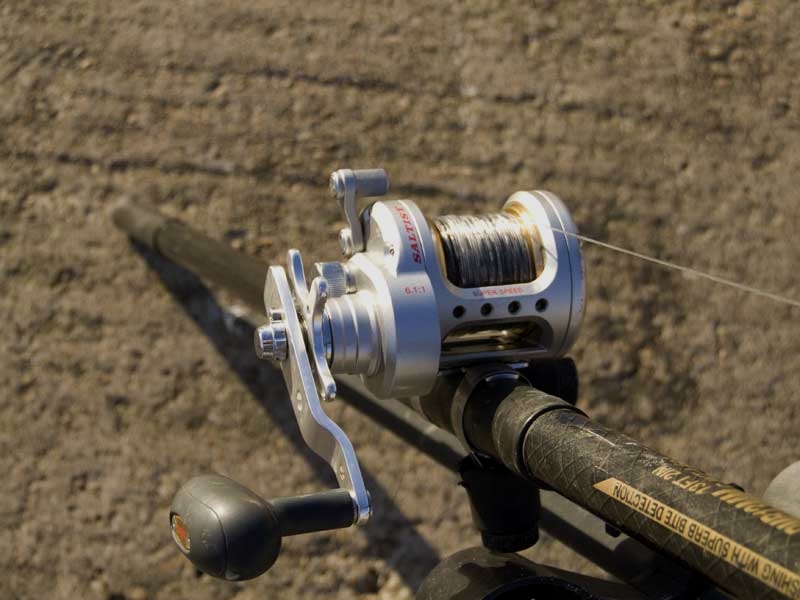 The last day in Iceland saw us fishing a rocky shore mark in search of vicious catfish. Even with big baits the reel performed superbly, easily taking cod, haddock and catfish to 8 lb in its stride.

Another recent outing tested my less than virtuoso casting skills in trying to reach the shoals of mackerel milling off our local pier. I’d re-spooled the reel with 15lb line – seemed like miles of it on the deep spool – and added a Varivas tapered leader. Because of obstructing bollards and lights at the harbour an overhead thump was again in order. The line flew cleanly form the spool to pick out the bait fish at around 100yds. I’ll end this part of the review by clearly stating that in the hands of a good caster there is no doubt that this reel will really excel.

A rare combination of bombproof build quality and user friendliness, the 20H is a brilliant reel for the money far and away outshining my 7HT reels, that until now, have been my shore reels of choice. Would I buy another 20H? Probably not because like my boat Saltist, I expect this reel to last for years. If I was fishing rough ground regularly I would go for the 30H model, which is effectively the same reel but with a wider spool/larger line capacity. 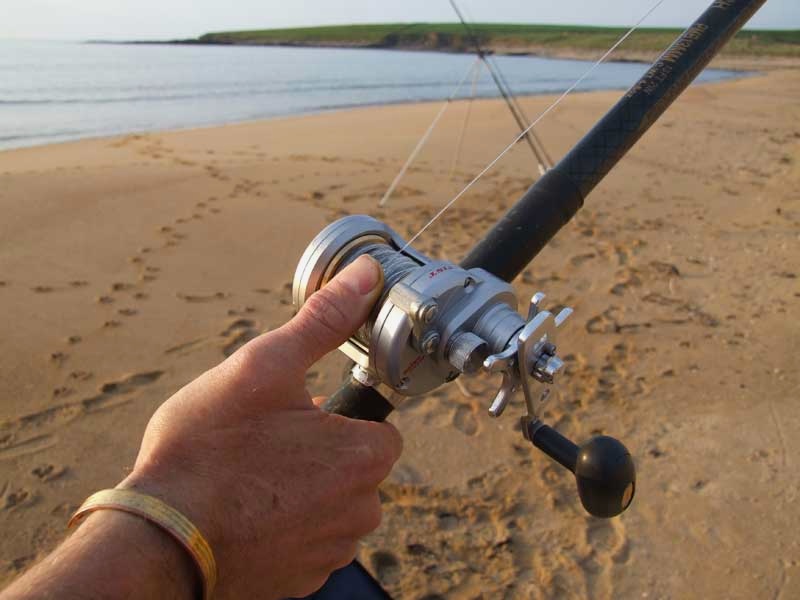 There are only two downsides that I can think of. The exterior coating on the side plates will probably scratch and scrape off as it has done on my well used boat Saltist reel. And with the centrifugal assembly in the end plate, it won’t be possible to fit an adjusted mag brake without some serious surgery. Having said that there are various third party mag sideplate kits available from overseas, and there’s every chance that one to fit the Saltist 20H & 30H will appear in time. Other than that is looks like this Daiwa shore reel ticks all the boxes and a few others besides.

A problem at the time of writing is finding a tackle shop with these reels in stock. It would appear that demand is out-stripping supply or that Daiwa didn’t anticipate the Saltist’s rapid popularity. I can’t wait to try the 20H for the shore spurdogs, and I’ll be giving it a turn from the boat for pirk casting too.