Des Westmore dismantles and comments on a battle-worn Daiwa Saltiga Z30 reel created for the Japanese market. The design of this imported reel differs slightly from the standard Saltiga multiplier range available in the UK but the findings largely hold for the more familiar SA20, SA30 and SA50 reels.

In past reel reviews I have made many negative comments regarding corrosion, and often said that with the correct design, finish and materials, these problems can be overcome. Of all the reviews I have written this commentary comes closest to proving that. Under the spotlight is the Daiwa Saltiga Z30 reel. This particular reel is owned by an angler who bought it from overseas before Daiwa UK started bringing the Saltiga range into this country. 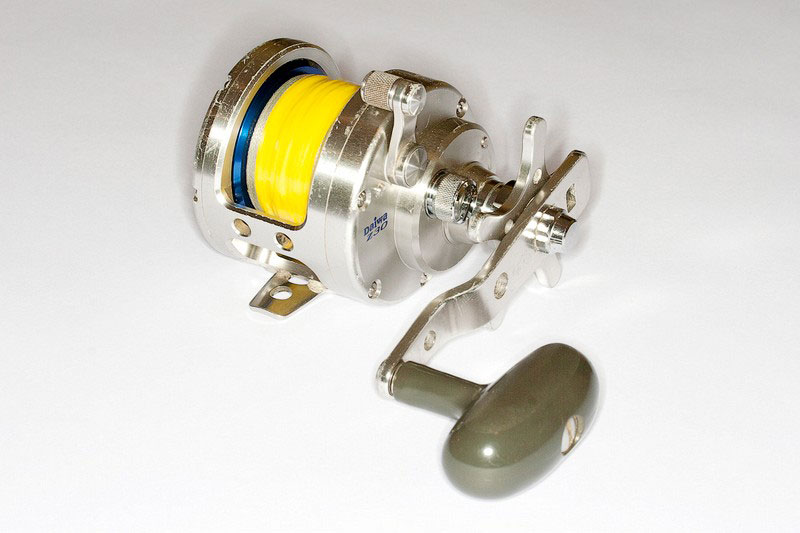 When I was handed this Saltiga it had clocked up a staggering seven years of use without being dismantled, and, more importantly, without failure. I am not talking seven years of lightweight use either because the owner is the hardest of hardcore fisherman who puts in the hours on both the beach and in his own boat, and he has a phenomenal catch rate. If this reel was an HGV it would have a million miles on the clock without an oil change. This then is not so much a review or test but more a tribute to a great piece of angling engineering.

It has been said that “One instinctively knows when something is right” and that is most people’s first impression of the Saltiga Z30. Even I, who, for my sins likes reels with level-winds, have to admit this reel is close to tactile perfection. Just picking it up makes me want to go fishing.

For general UK fishing with anything between 20lb and 40lb braid the size of the Z30 is perfect. The hard anodised, machined from solid frame and sideplates look totally bombproof and the satin silver finish combined with blue anodised spool make this one of the classiest reels around. The free spool lever looks solid enough to knock down buildings, while the handle is similarly oversized and has a superb ergonomic grip. But it is when you turn that handle that this reel delivers in spades. The Saltiga’s drive train is like no other, and even the original Swedish Ambassadeurs can’t compete with the refinement of the Saltiga. In short, it is as smooth as the proverbial cashmere codpiece.

So why did this Japanese designed piece of reel engineering royalty end up on a workbench in a shed in the heart of the Isle of Wight? Well after seven years the owner had to admit that the drag was not as smooth as it used to be (which for the record was insanely smooth), and the reel did now rumble a bit when you turned the handle. It was time for the Saltiga to go under the knife. 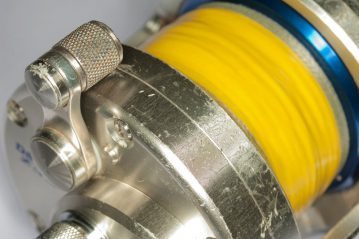 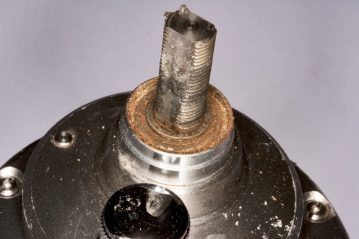 Taking the handle off, it did not take long to find the cause of the rumble. The handle shaft is a classic entry point for saltwater on most star drag reels and the Saltiga is no exception. Daiwa have, quite rightly, designed the Saltiga with a ball bearing above the one-way anti-reverse roller bearing. This bearing provides accurate radial location for the handle shaft in the sideplate and also carries the entire radial load when cranking the reel, leaving the anti-reverse bearing to just do what it is best at, namely making sure the handle only turns in one direction. The ball bearing, being at the top, had borne the brunt of the saltwater’s attack and in short it was trashed. Trashed in a way I have never seen before in fact. The bearing had corroded so much that the outer race had split into two halves. With the first bearing I came across in such a sorry state, I feared the worst for the rest of the reel’s innards.

Removing the screws that hold on the right hand sideplate, there was the first sign of the phenomenal attention to detail that Daiwa’s finest have paid to the Saltiga’s design. Each screw had a tiny O-ring on it to seal up any potential entry point for saltwater. I have never seen this in any other reel I have taken apart. 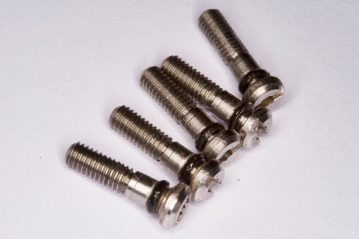 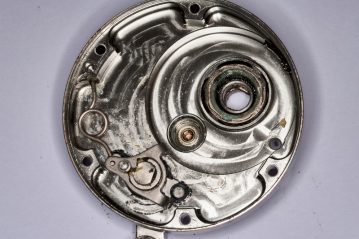 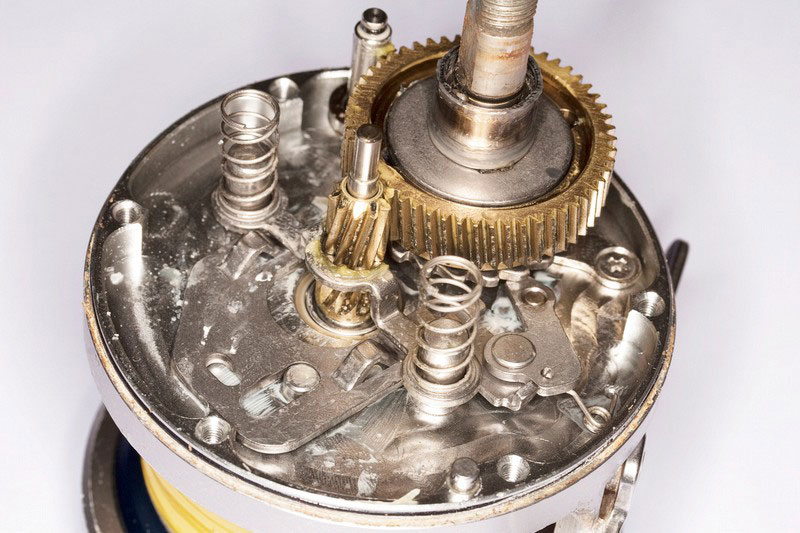 With the screws removed I was able to remove the sideplate. I was taken aback by what I saw, as the reel’s innards were close to pristine. There was still the light coating of grease that the reel had been given at the factory and pretty much all there was to see otherwise was totally intact anodised aluminium, glistening stainless steel and bronze gears that looked like they had just left the machine shop. I was staggered that after seven years of hard use a reel could look like this. I have seen reels – and not just cheap ones – that look much worse than this in seven months! It would be easy to imagine this reel shouting “Is that all you’ve got?!” at the sea.

Closer inspection revealed one of the reasons for the cleanliness of the Saltiga’s interior. The interface between sideplate and frame, as well as being machined to close tolerances, was protected by another O-ring. Again, I cannot think of another reel with this feature. The spool bearing that is supported by the frame was also protected by a rubber seal. Pulling the main gear off the handle shaft exposed yet another O-ring that is held in a groove in the shaft beneath the inner race of the anti-reverse bearing. Saltwater may have trashed the outer ball bearing but this simple feature, which probably costs pence to incorporate, ensured that it got no further. 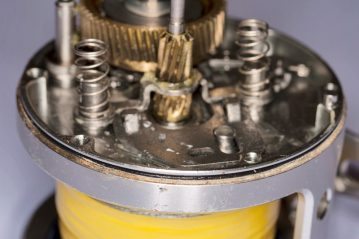 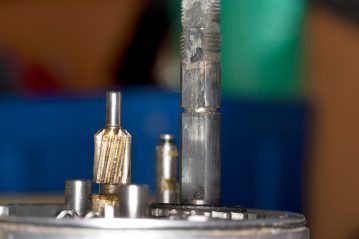 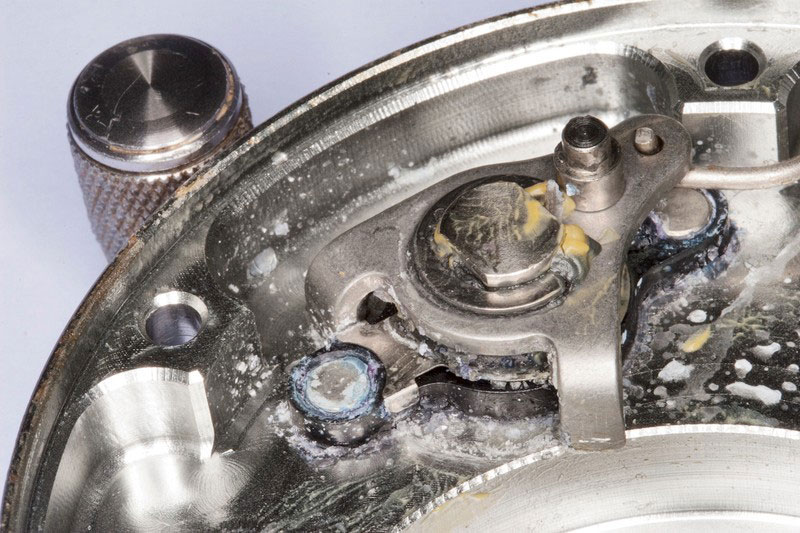 Most Waterproof Reel Ever

The gear box was pretty much sealed entirely. I did find one entry point that wasn’t protected – where the shaft of the free-spool lever is mounted. Saltwater had found its way in but the close fit of the shaft in the sideplate had kept it to a minimum. A final O-ring would have done the job even better but if Daiwa had done that I wouldn’t have anything to criticise! This still represents the most waterproof multiplier reel I have ever come across.

Looking at the drag washers, seven years of use had taken their toll. The Saltiga was one of the first production reels that I can think of with a ‘wet’ drag which accounts for both its smoothness and its reliability. The standard washers are good but I still didn’t intend to replace them with the standard Daiwa items. I was going to use Carbontex combined with Cal’s drag grease which is my standard drag upgrade. I purchase these materials in the UK from Russ Smith at Blakdog Tackle Replacing the bearing was easy, and I while obtained that from Smoothdrag I could have just as easily got it from Daiwa UK or any bearing wholesaler. 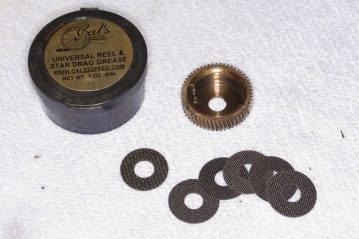 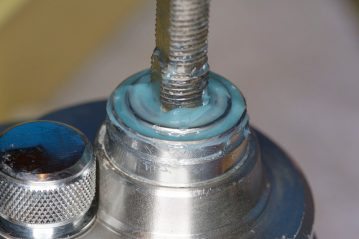 Reassembly was also easy. I just gave everything a good coating of quality grease and buttoned it back up. I did however give the outer ball bearing a good coating of Corrosion Block grease to give it some extra protection. There was little to do at the left hand end of the reel. Despite the absence of O-ring sealing on this side of the reel, saltwater ingress was virtually nonexistent simply due to the tight tolerances on any gaps.

So what is my verdict? That’s easy – outstanding. This is the best reel I have ever worked on bar none. It is totally fit for purpose, it is worth the money and does exactly what it says on the tin. At this point though, I ought to point out that the Z30 was aimed at the domestic Japanese market. The ones destined for export have neither O-ring seals nor automatic engagement of the drive train when the handle is turned, which the reel featured here does have. Why this is? Only Daiwa know, but since I took this reel apart I have serviced three UK spec’ Saltigas which will form the subject of a later ‘below-the-surface’ review.