Daiwa’s 7HT Magnofuge multiplier has taken the UK beaches by storm, but while anglers can’t seem to get enough of the reel, ‘casters’ have issues. Reviewer Neil Mackellow has plenty to say on this one.

The original black Daiwa 7HT was hailed – quite rightly – as a purpose designed user-friendly fishing reel. But that did not stop Paul Kerry and others from casting some truly phenomenal distances with it. The reel came with a composite one piece CT style frame, two spool bearings, centrifugal brake blocks and the spool was of the fixed spindle design. 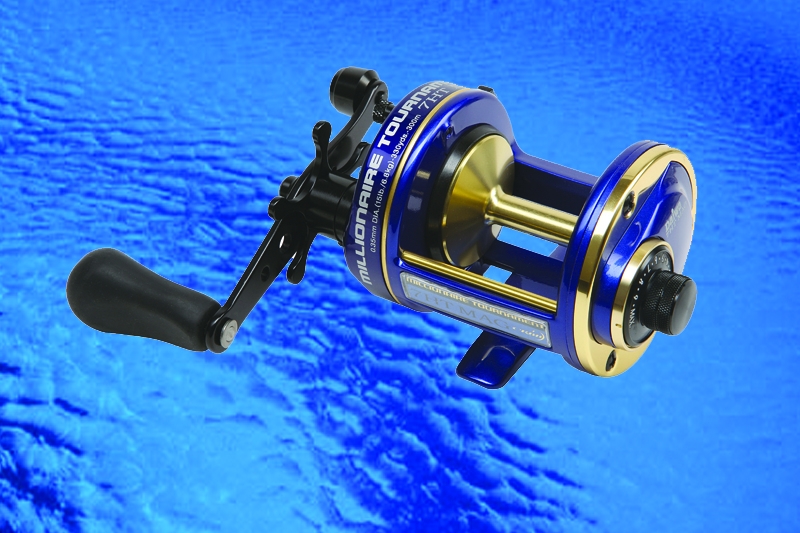 Today’s modern multipliers are faster, have more brake options and really are – when set up properly – pretty much idiot proof. However, there is a price to pay for all this performance, and that is spool balance. In the good old days before spools ran on inboard bearings and separate spindles supported by bearings you simply bought a reel, some line, wound it on the spool and hey presto, you went fishing. Today however, there’s a bit more to it. Back in the early 1980’s some tournament casters of the day got hold of a batch of Ultramag multipliers. Great little reels – as long as they never smelt salt water – but they were the very devil to balance. You see, these reels had the new Ultra-Cast spool with inboard bearings and a separate shaft and that made them run very fast, so any irregularities in the spool or line lay would turn the reel into right little screamer. 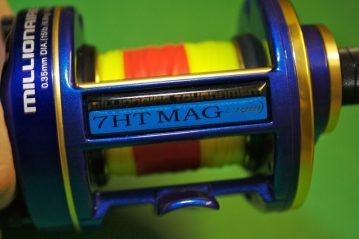 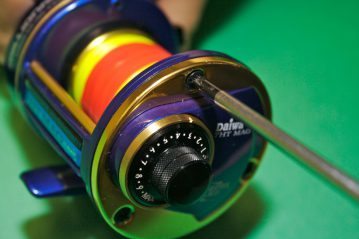 A matter of balance

Today we are aware of the need to not only ensure the spool is balanced but also the line that we wind on the spool is balanced too. This phenomenon affects all revolving spool high-speed reels and care must be taken to balance the line on the spool to avoid an embarrassing impression of the old Penn Sea Squeak. During the development of the second 7HT – the red Turbo, Daiwa realised that to keep up with other reel companies running spools on inboard bearings they had to make some upgrades to their spool. The shaft of the original 7HT spool went though the pinion gear, which if contaminated with oil or grease could and would retard spool rotation. To get around this, Daiwa removed the part of the shaft that ran through the pinion gear and placed the bearing on the end of the reduced shaft held in place with a pin. This configuration that they call the ‘ultimate free-spool’ has been carried over in the 7HT Magnofuge and it works. 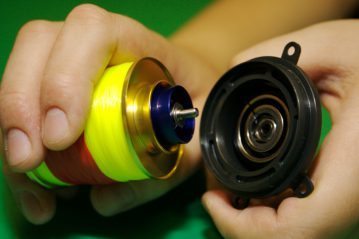 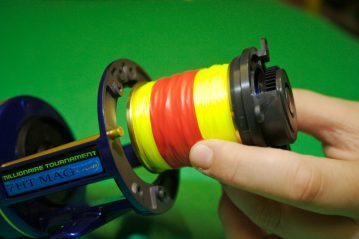 Unlike most magnetically braked reels available, the Magnofuge works on a different principle to the others: it still uses magnets, but in a different configuration and format (we’ll delve deeper into the intricacies of the Daiwa Magnofuge auto concept and system another time). We are told it does not engage the brakes until spool rpm is up around 30,000… and that’s fast!

1/ Before casting, adjust the dial to select the strength of magnetic control. This rotates the polarity of the two magnetic rings towards or away from each other, increasing or reducing the force of the magnetic field.

2/ Within a millisecond of the lead being released during the cast the spool hits its maximum speed (over 30,000rpm in tests).

3/ The centrifugal force of the spool’s rotation causes the conducting collar to extend outwards into the magnetic field of the rings.

4/ When the collar enters the magnetic field, magnetic resistance is applied to the rotation of the spool, controlling & reducing its speed.

So, how does all this technology work in practice? A trip to the beach was in order. Having loaded up with 0.35mm line and a few tweaks to the line balance I taped it down and spun it hard to see how it ran? Daiwa were true to their word on the RPM front, and it did feel a little strange that when I gave it a good hard spin there was absolutely no retardation whatsoever, it just spun and then spun some more irrespective of the control setting – spooky. I just hoped it would kick in when I make a pukka cast! 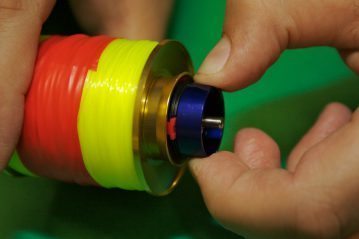 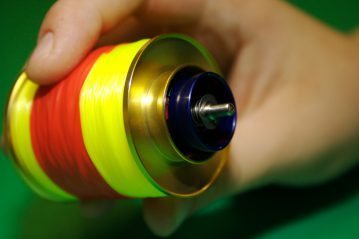 So, with the reel attached to a rod and a sturdy shock leader brandishing a 150g lead it was time to see how it would perform in the real world. Starting on max setting, I made my first tentative cast, well, more like the full Monty! All very smooth, but there was a definite feeling of early slowing. There was a blistering side wind running down the beach and I had cast straight across it. To my surprise not as much line was swept from reel by the strong cross wind as I had expected. I made another three casts on max then tried chopping the cast; casting too high; too low and then a wave skimmer. No hiccups, no fluffs, nothing even approaching a casting blip. But again, the reel wasn’t firing as fast as I had imagined, so I rotated the control knob from max to 5 – midway. There was still a feeling of retardation, but not as much so I took it down another notch. Now we were cooking, but still that annoying feeling of control. 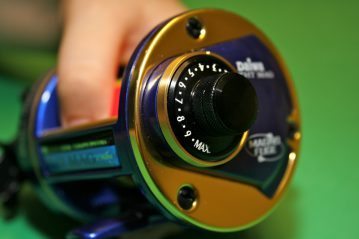 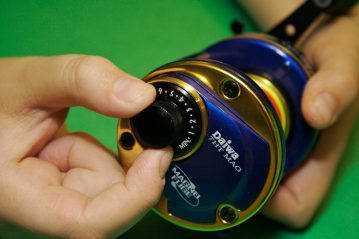 Then the red mist swept in and the tournament caster in me said to hell with it, down to zero. Oops! I am able to confirm you can make it go faster, as long as you don’t mind the odd crack-off!! On a different tack I tried a 40 yard lob to see if by holding back below 30,000 RPM a cast that obviously did not reach launch speed would not produce any braking. Well it does seem to, with just a little overrun at the end – weird. I fiddled with the knob again and made another half dozen casts, all with no problems. To be honest it felt like I was casting with a limiter. No matter how I abused it the lead flew away and was inexorably slowed into submission. An odd feeling. 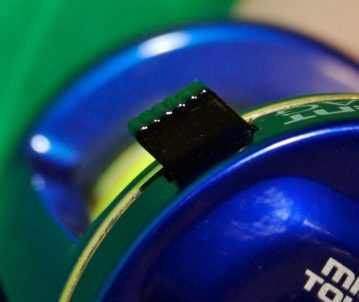 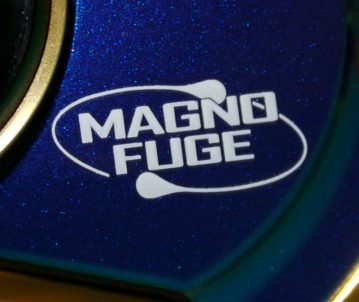 It sort of makes life a little more dull, nothing really exciting happens, the lead just trundles out there and falls in the water, all very regulated. And here, for me, was the problem. A bit like the nanny state telling you what to do; never letting you think for yourself. However, as a fishing tool it is without doubt a great reel… damn close to utterly idiot-proof. I love the handle and the fact that you have to rotate it one complete revolution to engage the gears to avoid premature engagement – the Achilles heel of reels with automatic spool engagement. Some will no doubt override the Magnofuge and replace it with a bespoke mag set up, but that would be a shame. The M-fuge does what it says on the box. If you want a screamer then buy something else. 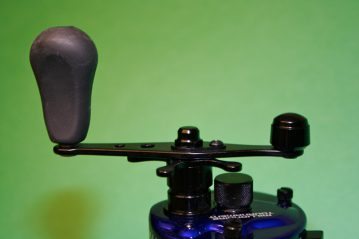 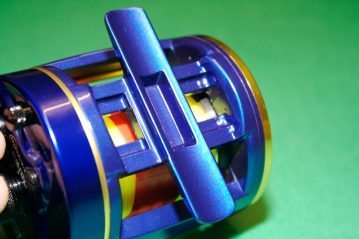 And blue sure beats the dodgy near pink of the previous Turbo model!

The overriding feeling of control

Not cheap at around £150 in the shops 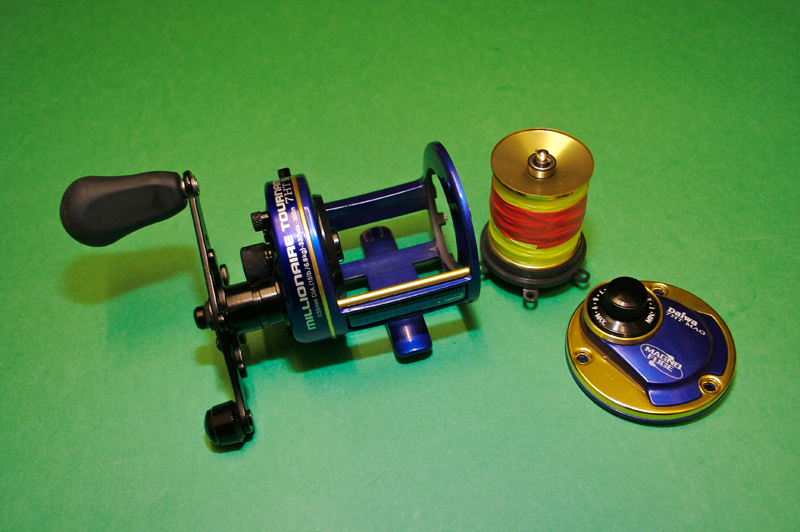 A great fishing reel, it just has the feel of Big Brother looking over your shoulder. However, while I am sure that before long someone will have figured out a conversion that will put the pace back into the 7HT Mag, my guess is that most users will be thankful to know they have a reel that will – most of the time – overcome a cocked up cast!!!