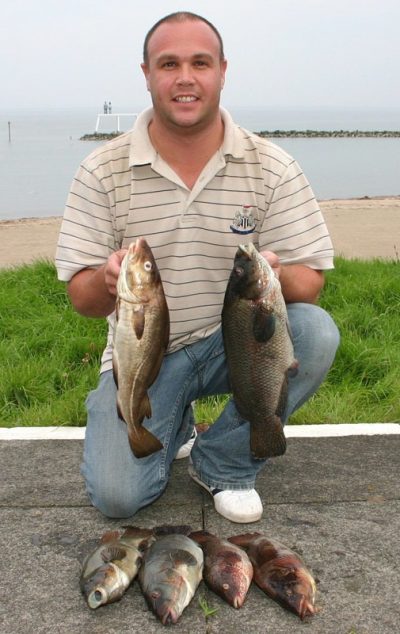 The Newbiggin Open on Sunday saw 368 fishing.  The heaviest bag went to Gavin Owen with 5 wrasse and 1 cod for 13 – 15lb taken from Beadnell. Second overall was John Ord with three cod for 8-14-10 taken from the Beacons, with Paul Westmoralnd third with two cod and a wrasse for 7-15-8 from Beadnell Point. Andrew Hooper had the h.s.f. with a cod of 6 – 08lb from St.Marys Island, second h.s.f. was a cod of 6 – 02lb taken by Arron Brown, and winning junior angler Cory Robinson was third with a cod of 5 – 09lb from Lynemouth beach. Runner up in the junior section was Mathew Holdroyd with two flounders and a turbot for 2-4-12. Mathew’s catch included the heaviest flatfish 1-8-4. Gavin Owen and Steve Potts won the team event with 18-1-4, followed by John Ord and Steve Cochrane with 13-11-8. Of the 369 anglers who fished, 101 weighed in 69 cod, 40 wrasse best 3-11-0, 38 flounders, 1 dab, 3 plaice and a turbot. (view more images from this event in the gallery at the bottom of the page).

Sport during daylight hours has dropped off in the settled conditions of the last few days, with most venues in the Teesbay area only producing odd smaller whiting and dabs.  Mackerel have been unusually scarce: last year they stayed inshore until mid November. There have been a few surprises though, with some good plaice, turbot, bass, and dogfish reported. And some of the low water marks along the colliery beaches have produced cod to 3lb on fresh crab baits.  Bass to 3lb have also been reported from several venues, while dogfish have shown from the colliery beaches. Ragworm producing plaice, with mackerel baits taking turbot.  Paul Blair had a nice plaice of 1 – 10lb and Andy Boagey had a turbot also of 1 -10lb taken from a Hartlepool pier.  Night sessions for best sport with large numbers of whiting and dabs moving inshore.  Steetley Pier has produced some big mixed bags, and the Durham beaches are full of whiting over high water.  The Hendon Wall area and Roker Pier have seen similar results, while S.Shields pier and the lower Tyne have lots of whiting interspersed with smaller cod and coalfish.  Both the rivers Wear and Tyne giving flounders and eels, and the lower Wear is also producing big bags of whiting on some tides.

North of the Tyne, sport is a lot better where more cod are starting to show, with fish to 7lb reported, and a lot of the low water rock edge marks have good numbers of wrasse present this year.  The clean ground beaches at Druridge Bay, Warkworth and Embleton have produced flounders and the odd turbot.  The last Newbiggin match had a superb weigh in producing 35 cod for 68lb, with winner Billy Foster taking 9 for 17 – 13lb.  Dennis Wade won another match with 2 cod for 7 – 15lb, best 6 – 11lb, from Dulce Carrs.  Geoff King won a Whitley Bay match with 5 cod for 11 – 05lb, best 3 – 09lb, and Dave Todd won a Blyth match with 4 cod for 7 – 02lb.  Peter Scott had a cod of 9lb from Newton, Steve Ayland had 4 cod, best 6lb, from Amble, and Barry Tweddle had 7 cod for 12lb from Druridge Bay.

South of the Tees an unknown angler beached a thornback ray of 9lb from Saltburn Pier, which was then photographed and returned.  There are plenty of whiting showing from here also with both Saltburn Pier and South Gare producing fish after dark.  The last Redcar Navy and Gentlemans A.C. match saw 9 out of 17 weighing in whiting, flounder, mackerel, and pouting.  Dave Allinson won with 5 whiting for 3 – 01lb taken from S.Gare, Alan Phoenix had 4 whiting and 1 flounder for 2 – 14lb taken from Saltburn, and Tony Barker had 2 mackerel and 1 whiting for 2 – 08lb, including the h.s.f. with a mackerel of 1 – 00lb. The first St. Marys A.C. match of the winter league saw 22 out of 27 weigh in codling, coalfish, whiting, flounders, and eels.  Tony Baker won with 3 cod for 5 – 01lb including the h.s.f. of 2 – 14lb, Matthew Garbutt had 2 cod and 2 coalfish for 4 – 14lb, and Terry Dalton had 4 flounders, 2 eels, and 1 rockling for 4 – 08lb.

Boat angling has been a bit hit or miss with fresh mackerel bait difficult to find, but there have been a few decent catches out of the Tyne where the Sarah JFK took a 50 fish haul including ling to 14lb and pollack to 9lb.  Ian Thomas fishing his own boat Jenny Lee out of Amble landed a fine ling of 21 – 08lb