Bite tapered monofilament invisibly incorporates the casting leader straight from the spool. The PSF team take a look and identify practical applications that might not be so obvious at first glance.

Bite from Tronix Pro is in essence a one-fill spool of main line that culminates in a seamless taper to a generous length of 60lb leader… in other words there is no knot or bonded join to attach the casting leader. Coloured differently in 20 metre increments, the 0.32mm/15lb line runs to a final 8 metres of 0.70mm/60lb clear leader length. The 255m spool fully fills a 6500 or 7HT sized multiplier. 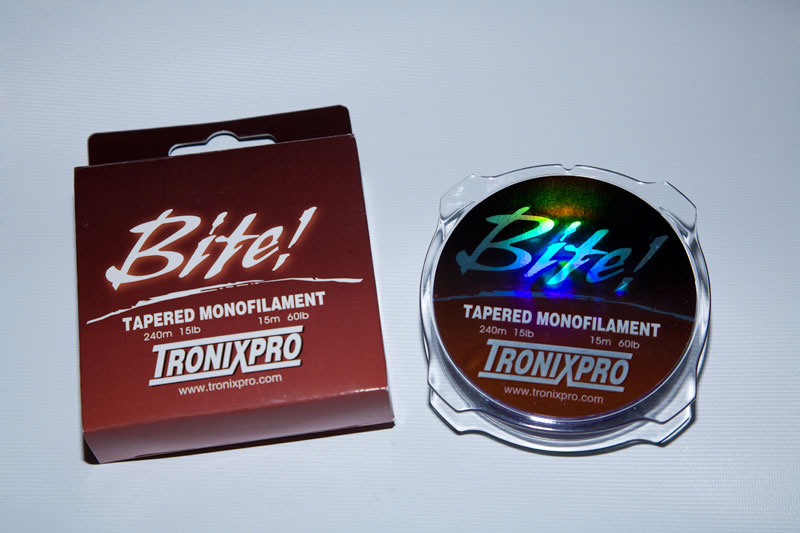 We’ve heard the Bite leader concept described as “novel” rather than practical but those opinions are confined to experienced beach anglers who are well used to attaching leaders. The fact remains that a great many less experienced anglers still fish leader-less simply because they have failed to master the knotted connection or they just can’t be bothered. With Tronix Bite such arguments no longer wash.

When you consider that large numbers of UK sea anglers use level-wind multipliers by choice then Bite might rate as a very practical solution to a persistent problem. The leader knot catching in the spreader of level-wind mechanisms is part of the argument against this type of multiplier reel, but the fact remains that many anglers find level-wind reels easier to use than popularised CT reels. With BITE as the main line there is no chance of the leader knot snagging. However, should a rogue snap-off occur then it’s back to square one and a fresh leader has to be attached in the traditional manner via a knot. 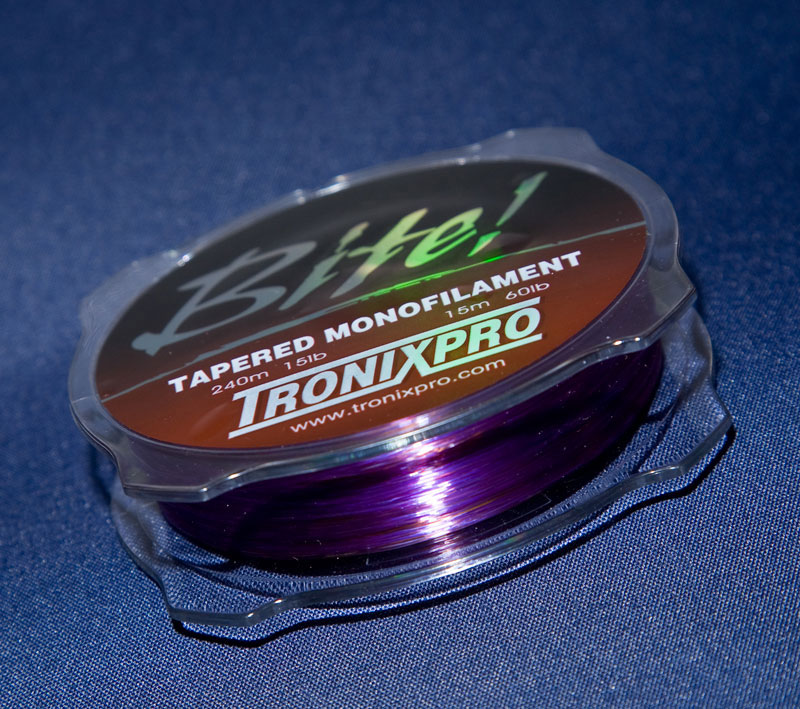 With fixed spool reels the leader knot catching on the first guide with that onomatopoeic ‘thwack’ is a common concern normally symptomatic of the guide being sited too close to the reel – as is regularly the case with off-the-shelf FS rod builds. If this is something that you worry over then Bite makes the largely psychological hang-up redundant by removing the leader knot from the equation.

Strong at a Stretch

Strength tests on Bite revealed some impressive results. First of all a knot was tied in a section of the main 0.32mm line and steadily increasing pressure applied until the line gave out. A set of such tests gave an excellent average snap point of 11.43lb at the knot. The results of the same tests on the un-knotted 0.32mm line were noteworthy indeed, with an average expiry of 22.20lb across a series of 12 tests. The suggestion then is that, fresh from the spool, 0.32mm Bite is in fact considerably stronger than the stated 15lb – a good thing in most opinions.

Bite has an RRP of £6.99 but take note that it may only be available while current stocks last. Planet Sea Fishing understands that increases in manufacturing costs for 2011 will either see an inevitable price hike, or BITE mono might even be discontinued altogether. Come what may, if you want to secure a quantity of BITE at this price then you had better get a move on.