David Proudfoot has been trialing the excellent Blue Zone Telepower 360 for the past 10 months and has thoroughly tested it out both at anchor and on the drift where it has punched above its weight.

Telescopic rods have come on leaps and bounds over the past 10 years and the best of them are no longer heavy walled beasts that staircase their way from the butt to the tip when under load. I have used around half a dozen of these collapsible rods from the boat and shore but none has impressed like the Telepower which displays its Italian heritage. 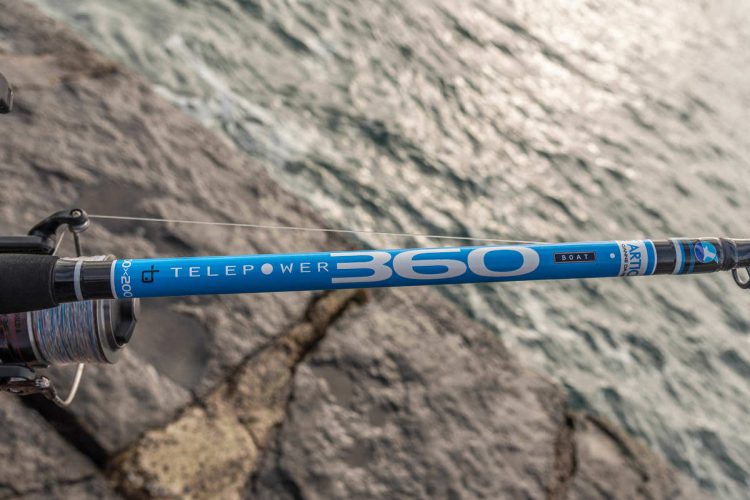 Designed in the UK

The Telepower is produced from a design specification produced by former England Boat International and Blue Zone boss, Neil Bryant. Neil has boat fished for many years both at home and abroad and worked closely with the established Italian rod builder Artico to produce the hand made Telepower range in Italy.

The blanks reflect the quality that one expects from Artico’s skilled craftsmen, slim but with under lying power, the rod including push-in tip weighs a mere 320gms and measures 20mm in diameter just above the top grip. The blank has a minimal protective coating, allowing the sections to freely telescope, other than where high build is used to secure and safeguard the guides. The section of the rod above the butt has a tapered “speed bump” which allows this section to be locked in place and this assists when additional power is needed or when a fish is coming near to the landing net. The rod measures 3.4 metres when fully extended and the 63cm tip is fitted. Locking the first section down reduces the length to approximately 2.9 metres. 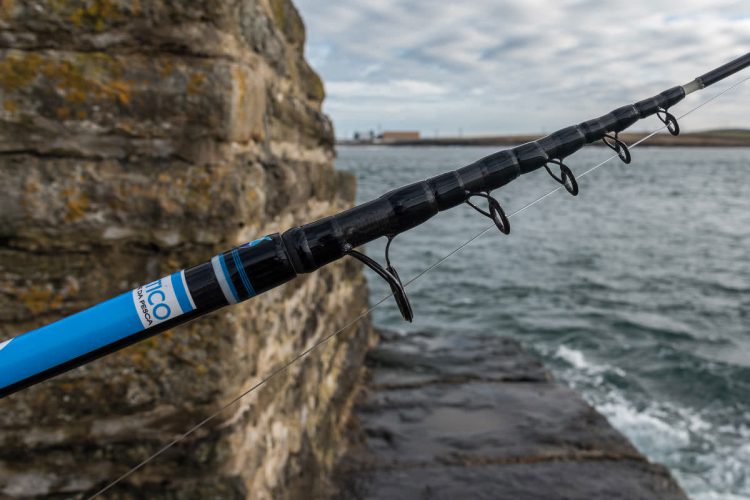 Without the tip fitted the rod collapses to a comfortable 1.1 metres and with the tip fitted it is still easy handled for travel and can be left setup with the reel fitted and a clip attached to the line at the top ring. A word of warning, be careful that the reel handle doesn’t turn when in transit and impart undue stress on the tip. 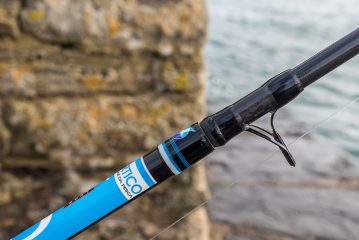 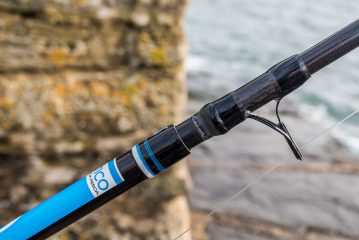 Like all telescopic rods you should give a strong pull when extending the sections to ensure that they seat firmly in place and prevent an unscheduled collapse.

The tips are great quality and care has been taken to ensure that they are rung on the spline which means that they don’t tend to twist under load like some I have used. The two tips supplied extend the quality workmanship displayed in the rest of the rod and are rated as medium and strong to handle weights from 100 to 200gms. 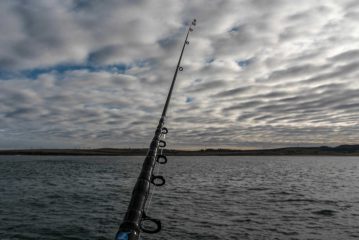 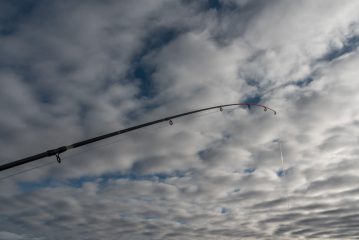 Both tips have plenty of muscle in the lower to mid-section but the final third is forgiving and provides terrific bite indication and the whole is soft enough not to bounce a grip lead when uptiding. The soft tip is great for soft mouth fish such as haddock.

While the rod will cope with an underhand lob at the top of the rated range they are now designed to power the heavier leads to the horizon. Fishing down tide the rod and tips will handle 250gms but I wouldn’t push things over that.

Guide to the Rings

The five rings main are three legged on the main rod dropping to single leg versions on the tips. Although Blue Zone don’t claim that the rings are Fuji, they are certainly high quality with no signs of wear and tear on the liners after using mainly braid for almost a year. The frames are corrosion free despite not being washed with fresh water as frequently as they should. 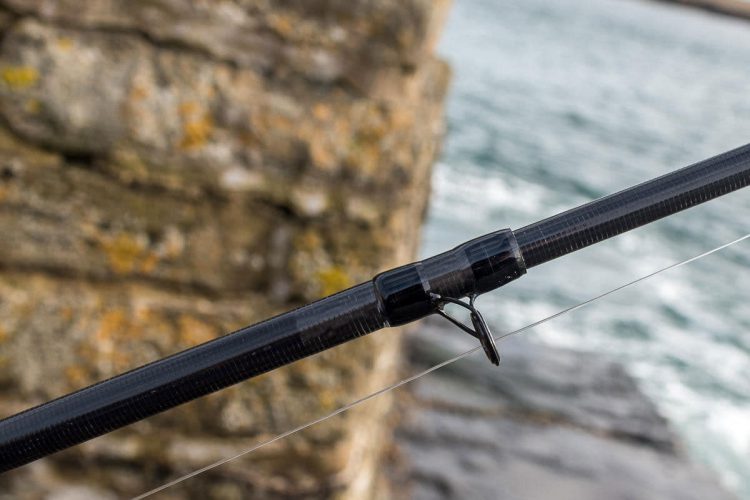 Although the Telepower can be used with a multiplier the ring spacing and truncated handgrips mean that it is more comfortable when teamed up with a fixed spool reel. I have used a couple of different 5000 sized fixed spools and have found it comfy both for fishing and casting.

I would have preferred guides with a larger internal diameter on the tips to allow a small clip to pass through. I would recommend using a tapered leader to keep the knot to the main line as neat as possible.

The reel seat is centred at 46cm which leaves a butt section that nestles under the arm and doesn’t obstruct other anglers in tight spaces while still comfortable for casting. 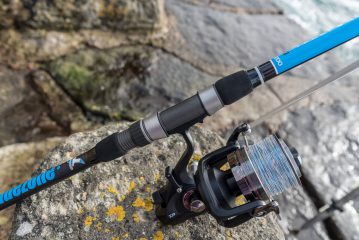 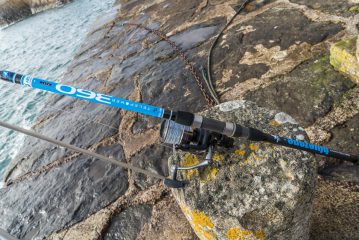 The three EVA grips are as much for decoration as anything when using a fixed spool reel but they are neat and easy to keep clean. 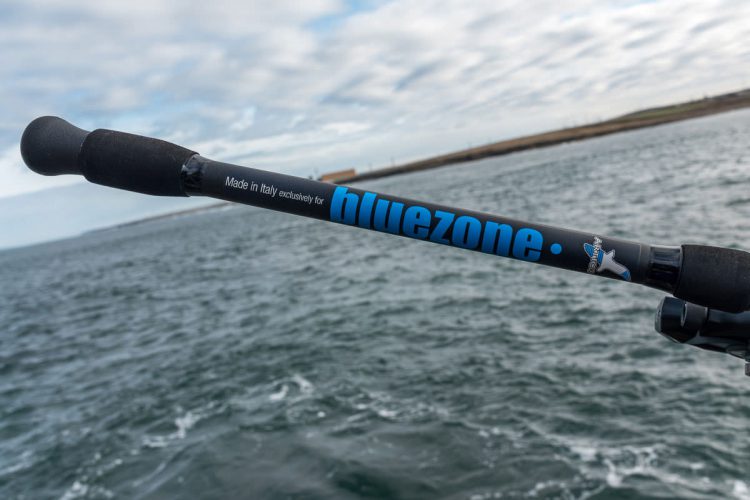 Charter boat skippers will be happy to see a proper plastic butt cover as they hate to more common metal butts which can mark and damage the gelcoat on the boat deck.

Not just for Match Anglers

The vast majority of long telescopic boat rods are in the hands of match anglers where they perform admirably when species hunting. However, I have tested the Telepower 360 both at anchor in match situations and for targeting the fast running, powerful smoothhounds off Holyhead when uptiding.

In addition, the rod was used for drifting for pollack and wrasse over the rough ground off Anglesey’s South Stack without any problems. 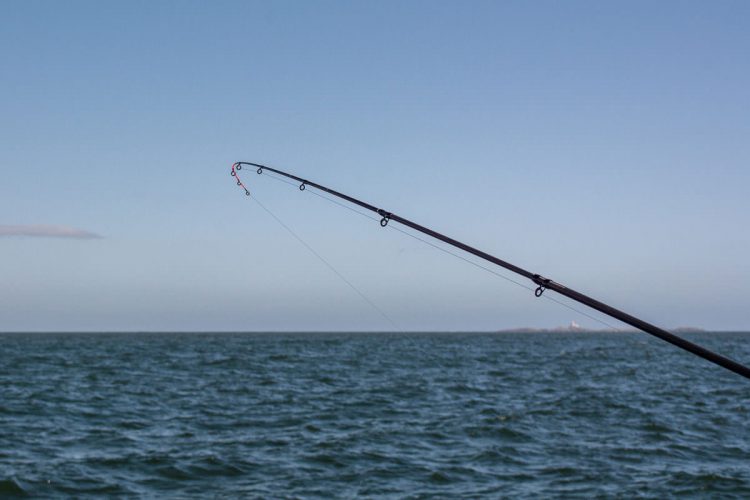 The ultimate test was small boat fishing on the drift off the north Caithness coast for cod and pollack. The lightweight, responsive 360 rod showed its class when hopping Eddystone Eels and slow jigging plastic worms, at one point landing a double shot of a 13lb cod on upper snood coupled with a seven pounder below. 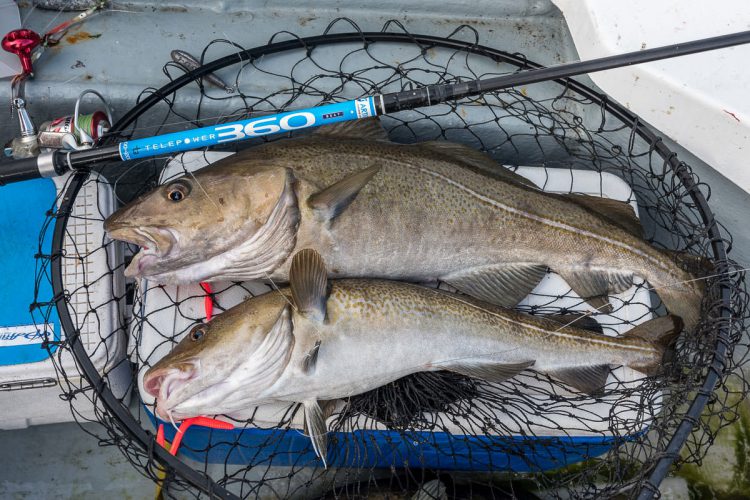 Like any long rod, care has to be taken when drifting as the length can make it difficult to handle if the terminal tackle snags the seabed. The tip should be pointed directly in the direction of the snag and at no time should you overload the blank by hauling with the rod curved over. One advantage of the telescopic rod is that, if you a quick enough, you can collapse the sections making it easier to cope with snags if fishing under the boat.

When under load the blank takes on a pleasing curve with none of expected stepping effect which is common in multi-section rods. The tolerant tip section deals with the plunges and lunges of a weighty hooked fish while the power of the middle and lower thirds provides the backbone to pump double figure fish to the surface. 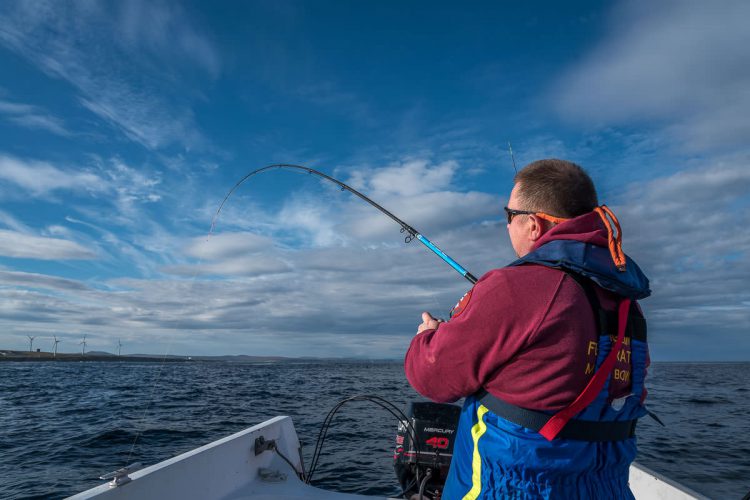 Even when the weight of the reel is taken into consideration the outfit is a joy to fish with all day in hand and the fish can be felt through the blank from the moment the hook is set.

A Turn on the Shore

Although the Telepower has been mainly used from the boat I have had a few sessions on the shore with it where it proved great fun with flounders and the smaller species from the clean beaches up north. I found it best to stick with leads up to 100gms using a simple overhead cast.

The Telepower comes to fore off the beach when roving and letting the baits swirl about in the tide to impart movement or to slowly retrieve as hand holding this rod requires little effort even during a longer session. 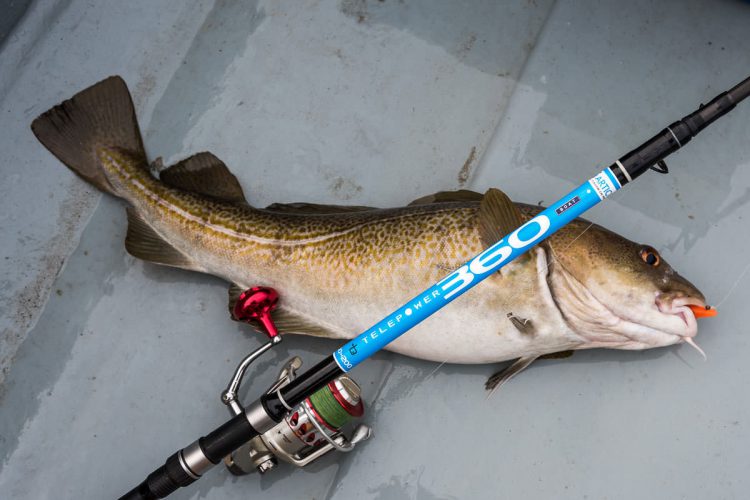 The Blue Zone Telepower rods, there is a shorter 300 model, are terrific fun to fish with in addition to being a serious tool for the competitive boat match angler. They are built to last and are a top of the range rod at a mid-range price. The days of the telescopic rod being seen as one for the holidaymaker are now in the past.

If you have never tried out a telescopic then you can do no wrong picking up a Telepower for uptiding or general fishing. I have given mine a hammering over the past season and it’s my go to fixed spool rod for just about everything.