The most famous moustache in boat angling, Des Westmore joins the Planet Sea Fishing team, and kicks off with his thoughts on the clever Abu Conolon Travel Combo boat rod.

I first saw the Abu Conolon Travel Combo at Pure Fishing’s trade show and though I only had a chance to have a quick look at the rod, initial impressions were good. As its name implies, the Conolon Travel Combo is aimed at the travelling angler. The TC is in fact, two rods in one: namely a 7&#39; 6″ downtider with a rating in the 12-20lb bracket, while the other rod configuration is that of a 9′ 6″ 4-8oz uptider. Add to this that the handle incorporates a twist-lock telescopic butt and you can see that it makes for a pretty versatile bit of kit. 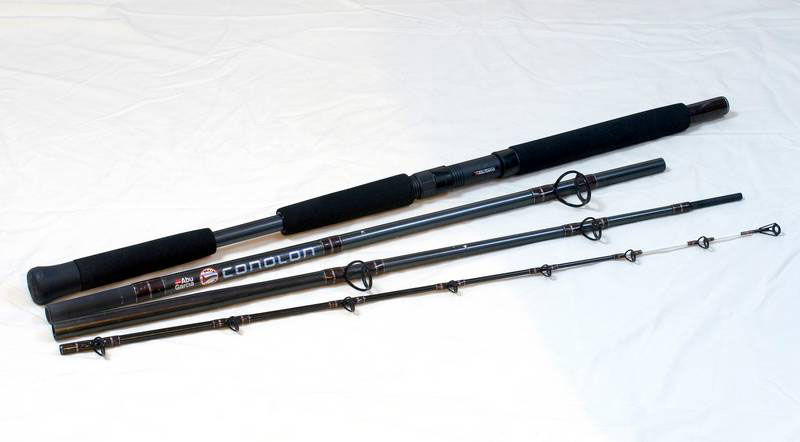 The Conolon features the ‘Braid’ logo, signifying that it has been designed for use with the latest superlines… a fact confirmed in conversation with the rod’s designer Roy Marlow when I previously tested the Abu Suveran Pro Casting rod. The Conolon employs similar “Multi-dynamics” to ensure that the rod does not lock-up in the way that many carbon rods do under extreme compression. This is achieved by the careful balancing of the modulus (stiffness) of the carbon fibres used, along with things like the blank’s internal and external diameters as well as taper. Of course, being an uptider, this rod employs a soft fibre-glass tip which does part of this job anyway. The trick with a blank like this is to get the transition from glass to carbon correct so that the rod bends progressively and does not look like a dog’s hind leg when under load.

The Conolon comes supplied in a crush-proof travel tube that’s 32″ long and 3 1/2″ diameter. A multi-section bag protects the rod’s four pieces inside the tube. The first section is the handle which is employed in both up-tide and down-tide applications. Three black EVA grips are fitted, the foregrip being triangular in section, along with a generous butt cap. A genuine Fuji reel seat is used with the threads pointing down the rod. When closed, the handle measures 29″ overall, with the length of the handle behind the reel seat being 13″. When telescopically extended, this last figure becomes a maximum of 21″, or anything in between using the “Twist and lock” feature of the handle. 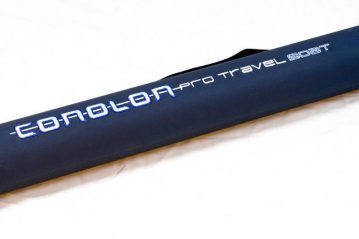 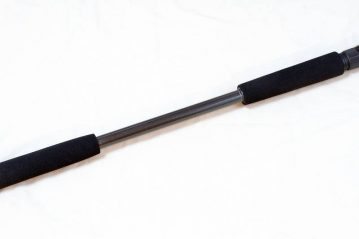 The next two sections are of a natural carbon fibre finish with the first being 27″ in length and the second being 29″ overall. These two pieces are very clever in their design and here’s why. To make the rod up as an uptider, the second section plugs in to the handle section. The third section, which incorporates a seemingly strange thickened, parallel section at its base, then fits on the outside of the second section. This section has a conventional spigot joint at its upper end that accepts the fibre glass tip section, which is again, 29″ in length but is finished in black. 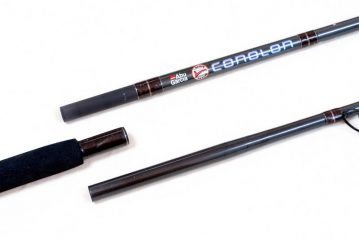 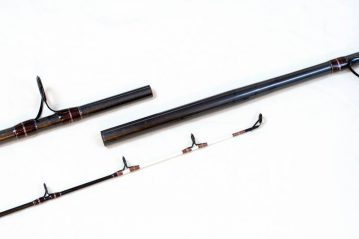 To convert the rod to a downtider, you do away with the second section, and plug what was the third section’s thickened parallel section into the handle. Why is this so clever? Because the thickened parallel section serves as the female part of the joint as an uptider, and as the male part of the joint on the downtider. To achieve this dual functionality, that part of the blank has to be finished to close tolerances on both the outside and inside diameters and any reinforcement has to be contained within the structure of the joint (there are no strengthening collars etc). Apologies if this sounds a bit confusing, but don’t worry, it works perfectly, even if the rod does look like it’s carrying an aneurism when configured as an uptider.

Crucially the spigot joint blends the tip glass seamlessly into the carbon fibre lower sections. It amazes me how fair the curve of the rod is across this joint when flexed, considering the dissimilar materials and the thickening of the section across the joint. Finally, ten Fuji BNOG rings are fitted, tapering from 25mm to 10mm, plus a tip ring. Whippings throughout are an attractive dark brown with silver and red piping. The top 7 inches of the rod is painted white to aid bite detection. 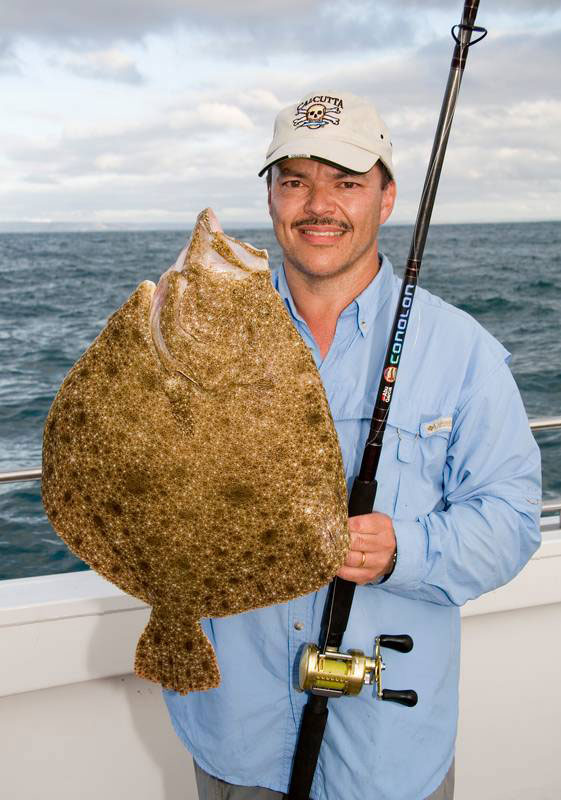 So, enough of sexy design techniques, pretty whippings and all that malarkey, how is the rod when you fish with it? Well, I may well be a bit biased on this score because during testing I have had good luck using it and caught some good fish. The bulk of testing took place in late summer and early autumn, with the majority using the rod on the drift or as a long downtiding rod. Initially this was fishing for bream on wrecks in deep (180′) water.

Using a 6500 size reel and 19lb braid, the rod truly excelled. The soft tip provides superb bite detection, both in a rest or when hand-held. It is also a superb shock absorber when a fish like a good autumn bream goes berserk, as they usually do. A four-day trip to Alderney gave me a chance to test the rod on the drift for bass and flatfish. It was great for both, with the best fish I had on it being a 10 ½ lb turbot. Again, the rod behaved impeccably when matched against a fish of that size and strength.

Until now, my favourite up-tider has been my Suveran 4-8oz, but I think I may prefer this (cheaper) rod… though I suspect Abu might not want to hear that! In all honesty, there is not a lot in it, but when you consider I am comparing what is albeit a stronger two-piece rod, that is arguably at the top of its game, against a four-piece travel rod, you can see the significance. In terms of action, I find this rod hard to fault and given its RRP of around £90.00, the Conolon is probably the best rod I have tested in terms of value for money. After all, you are getting two great rods.

Unfortunately, it is not all good news and the four day trip to Alderney did reveal the rod’s Achilles heel – the telescopic handle. I have always taken care to look after the telescopic butts on my other Abu rods. Despite this, my Suveran has been a bit temperamental, but as it is one of the original series I assumed it was teething problems with the design. However, others have experienced identical issues, mostly with the handle jamming in one position. It was the opposite with the Conolon Travel Combo though, and after four days in the Channel Islands, whilst the handle will still telescope properly, it will not lock at any position, and the mechanism is all “Twist” and no “Lock”. It is a real shame, as the rest of the rod is so very good. 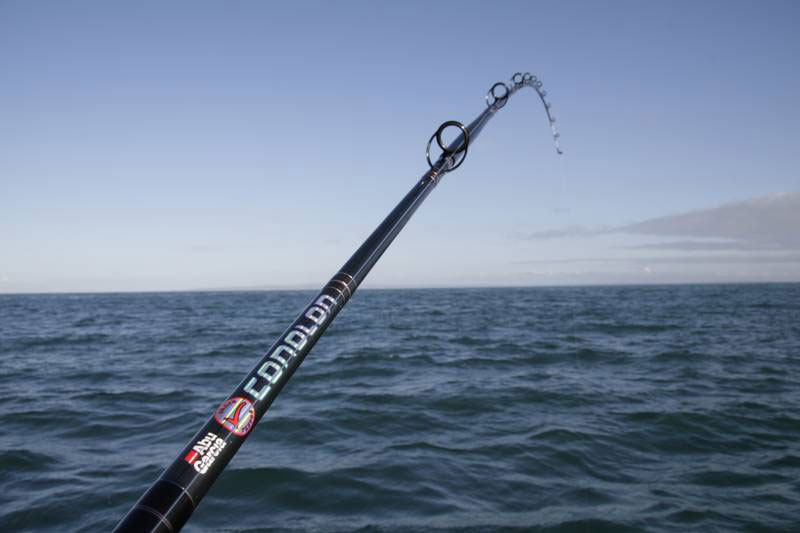 So then, is the rod “Highly polished but deeply scratched?” Definitely not, it’s just not quite perfect, but the true action and pure value for money are still good enough to highly recommend it. If you want to find out more for yourself, get down to your local Abu dealer or contact Pure Fishing on 0845 0500093 or send an Email