Shore sport in the Teesbay area remains relatively poor with whiting the main species, particularly from Steetly Pier among lots of small dabs. Strangely however, some tides have produced hardly any fish at all.

The Durham beaches are mainly producing whiting with the odd cod to distance casting. Roker Pier good numbers of quality whiting on some tides, and odd cod. 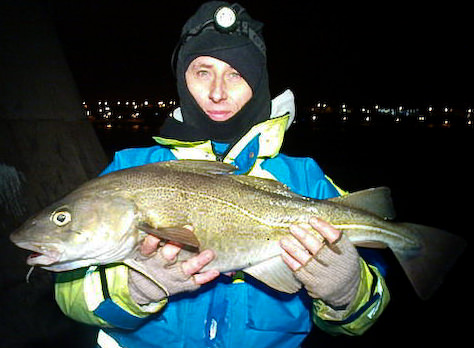 The bigger cod that where evident in the North of the region seem to be slowly moving Southwards. Sean Hildrew fished Horden to land a cod of 10 – 01lb, the biggest cod to show South of the Wear for several weeks. Colin Wood had a cod of 12 – 04lb last midweek from Rathouse Corner, and Dave Crut had one of 9 – 08lb from Roker.

North of the Tyne: Some anglers have had spectacular results, while many others have blanked. The Tyne itself is starting to produce better numbers of cod again, and some bigger fish have shown from the piers. Steve Hardy won a Longbenton match with 3 cod for 7lb from Tynemouth Pier, and cod to 8lb have been reported from South Shields Pier. The biggest cod of the winter so far, and the biggest for several years was taken from the lower Tyne on Friday night by Hartlepool angler John Wilson in a Hartlepool Pirates match. John struck into a timid bite that grew into huge cod of 27 – 08lb. This is the biggest cod ever from the Tyne and possibly the sixth biggest cod of all time caught from the N.E. between Scarborough and Berwick. Together with another smaller cod John won the match with a total of 29 – 02lb, ahead of Bill Bradley with 6 whiting and 3 dabs for 6 – 08lb, and Dave Robinson with 6 whiting and 4 dabs for 6 – 04lb.

The Amble area continues to produce a few cod from the rock edge marks. The last Amble match saw Zac Ainsley win with 2 cod for 8 – 03lb from Seaton Point – best 6 – 05lb. Colin Dawson had a single cod of 5 – 09lb from Druridge, and A.Taylor had 2 cod for 5 – 07lb. Graham Turner had a cod of 11lb from Beadnell. Barry Tweddle had 7 cod for 21lb from Hadston, where Dave Cruddace also had 4 cod for 14lb, and Paul Stevenson had 3 cod for 11lb – best 4 – 08lb. Alan Cottrell also fished Hadston and had a superb session taking cod of 17lb, 10 – 05lb, and a baby of 3lb. Darren Shields had 4 cod for 21lb, best 8lb from Hauxley. Gary Forster had 5 cod for an estimated 35lb from Newbiggin, and Alan James won a Newbiggin match with 2 cod for 6 – 02lb, best 5 – 04lb. Other anglers report cod to 7lb from the Beacons. Gary Wilson had a cod of 7 – 06lb from Blyth Pier, and Neil Windlass had one of 6lb from the Sumps. Ian Galbraith won a Whitley Bay League match with a cod of 8.04lb from Hartley Skeer. John Leveson had a cod of 11lb from Collywell Bay, and Stu Ford had cod to 6lb also from Collywell Bay.

Cleadon A.C. fished early last week and size fish were hard to find with only 2 out of 28 weighing in. Micky Mouat fished the Black Path to land a cod of 3 – 02lb, and Mark Shotton fished Roker to take 2 whiting for 1 – 06lb.

The East End and Hendon Sweepstake on Thursday also saw anglers struggle to catch with only Tommy Tate landing fish, when he managed to find 2 cod of 2 – 04lb, and 1 – 10lb from Marsden.

Another Eastenders Rover Open on Friday saw Gary Pye win with a cod of 3 – 09lb from the Blast Beach; Brian Curtiss had one of 2 – 05lb from Rathouse Corner; Dave Healy had a nice whiting of 1 – 05lb, also from Rathouse.

The Ryhope Tuesday Evening Sweepstake saw Bernard Westgarth win with a good cod of 10 – 05lb from Whitburn. Nick Westgarth had a cod of 2lb, also from Whitburn; Terry Mann had a whiting of 0 – 14lb; Bill Kennedy only needed a flounder of 0 – 06lb for fourth place.

The Ryhope club match on Sunday saw a good turn out of 95 anglers looking for one of these big cod. Ger Kirby only needed a relative tiddler of 2280 grammes taken from Johnsons to win ahead of Scott Brown with 1 cod and 1 whiting for 1710 grammes, and Keith Kohnson with 1 cod of 1360 grammes. Top junior was Callum Waddle with a flounder of 260 grammes, and the h.s.flatfish went to Alan Burton with a flounder of 425 grammes.

Shore prospects:With heavy seas forecast for the remainder of this week shore sport should improve considerably with the chance of some more double figure specimens turning up.