This season’s winter mulleting started brightly with good fish to over 9lb. Well, that was as good as it got, and Alderney waters now seem devoid of mullet. But is certainly not all doom and gloom as we are seeing plenty of other species. 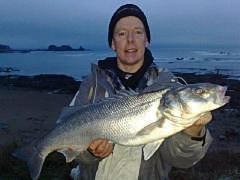 Bass fishing normally tapers off around now, but there is absolutely no sign of that happening any time soon. Shore catches of up to 20 fish have been reported in four hour sessions to simple worm baits. These bait-caught bass are not the biggest fish generally with the best around 5lb. If it’s bigger bass and super sport that you’re after then you’d best break out your plugging rod.

Best fish reported on a plug was one of 8lb 4oz to Steve Ace of Bristol. Steve whom works for tackle retail giants Veal’s is a regular visitor to the island, making three visits each autumn/winter and he says this is some of the best Bass plugging he has experienced in 20 years of visiting Alderney.

There are lots of other species to aim for if you want something different. Stacks of black bream to 2lb 8oz; sometimes plague proportions of bream persist, but luckily we know where to go to avoid them.

Sole had only really showed early season, but there has been several this month to 2lb 4oz. Red Mullet are back in evidence too. These featured regularly around September and October before thinning out, but they are back on now and you can target them specifically with worm baits…. and reds make great eating. There are still a few codling showing.

Congers to 35lb have been landed. Nigel Bowditch had a fantastic night, landing six eels to 29lb. He had two double-figure bull huss and dropped a large pollack due to the large swell.

Huss have featured regularly through the month and their numbers seem to be increasing around the island. Could the reason be that two of the potting boats have recently retired, or is this just a coincidence?

Dogfish are keeping rod tips nodding. Smoothhounds are showing too… not in great numbers but it is possible to target them. There are recent no tope reports but a good mixture of rays have been caught. Small eyed to double-figures, undulate and blonde all featuring.

All the above is shore fishing but I did manage half a day in a RIB actually, trying to help someone out to improve their fishing. He did learn a fair bit fairly quickly with 6 bream, 1 bass, 1 pollack and 2 blonde rays coming to the net. He also learnt not to invite me again… I punctured one of the tubes!