Holyhead charter skipper Gethyn Owen takes an indepth look at wrasse and how to catch them afloat.

When thinking about the various species around our coasts it strikes me that I have many favourites. Bass, wrasse, pollack, smoothies and tope all feature for different reasons. Like an adrenaline time-bomb, that initial tick, tick, ticking of the ratchet from a tope or big hound sets the heart to racing. Or the drag smoke intoxication of a powerhouse pollack boring straight for the wreck, while you whimper and hang on for dear life. And bass, well, they are the fish equivalent of fast motorbikes to menopausal males like me! Big wrasse are more your 10 bells pugilists: ballsy, brawny and nailed on reliable… just the way I like it.

There are many members of the wrasse family worldwide. The British Record fish list names seven species. These are the rock cook, Baillion’s, scale-rayed, goldsinny, corkwing, cuckoo and ballan wrasse. Only the cuckoo and ballan wrasse appear on the main fish list. All the others fall below the 1lb threshold and are mini species. Ballans and cuckoos are therefore of most interest to anglers.

The ballan wrasse is a very strong fish with a deep body, large head, and powerful mouth and jaws. Young ballans are usually a shade of green, while older fish tend towards a reddish brown or dark green; quite often the ballan wrasse will exhibit a mottled effect of white spots.

Like most wrasse, the ballan has large ‘Mick Jagger’ protruding lips. These hide a single row of strong crunching teeth that make short work of the likes of limpet and mussel shells. There is a second set of grinding teeth in the throat to aid digestion. 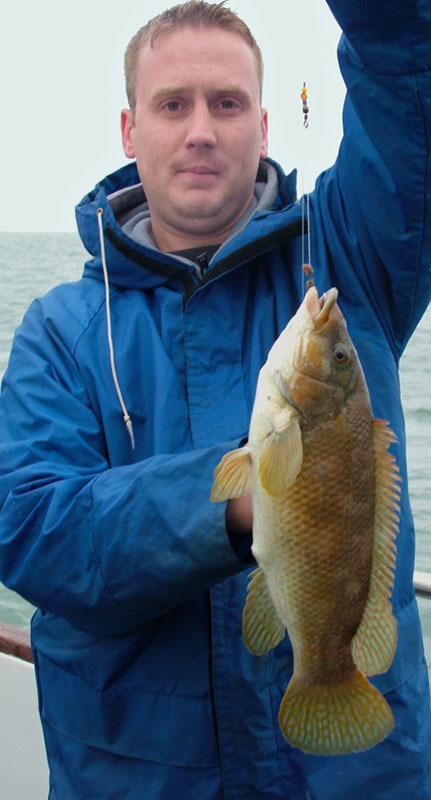 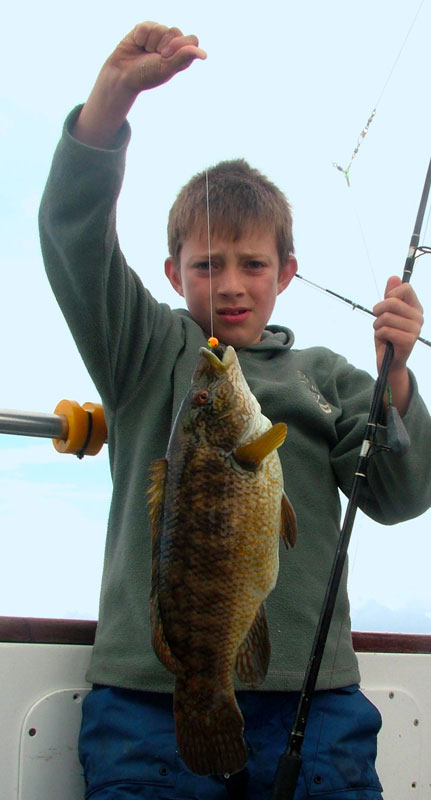 The cuckoo is a particularly colourful member of the wrasse family that would not look out of place in a tropical fish tank. Slender of body with a longer snout than a ballan, the cuckoo is easily identified.

Colouration varies with age and sex: females and immature males tend to be more of a yellow/brown nearer the head, running to a pink body with a very distinctive row of black and white patches along the latter part of the dorsal fin, and with blue edging to the fins. Mature males on the other hand are veritable peacocks. They have large blue heads and a wealth of blue, orange and yellow colours over the whole of their bodies. When courting, males’ colours are even more pronounced to attract a female partner for breeding.

Both the ballan and cuckoo wrasse are hermaphrodites, starting life as female fish, with some maturing later into the male of the species. It is understood that the male cuckoo wrasse guards a harem of females. Should this male die, a female will change sex to replace him. 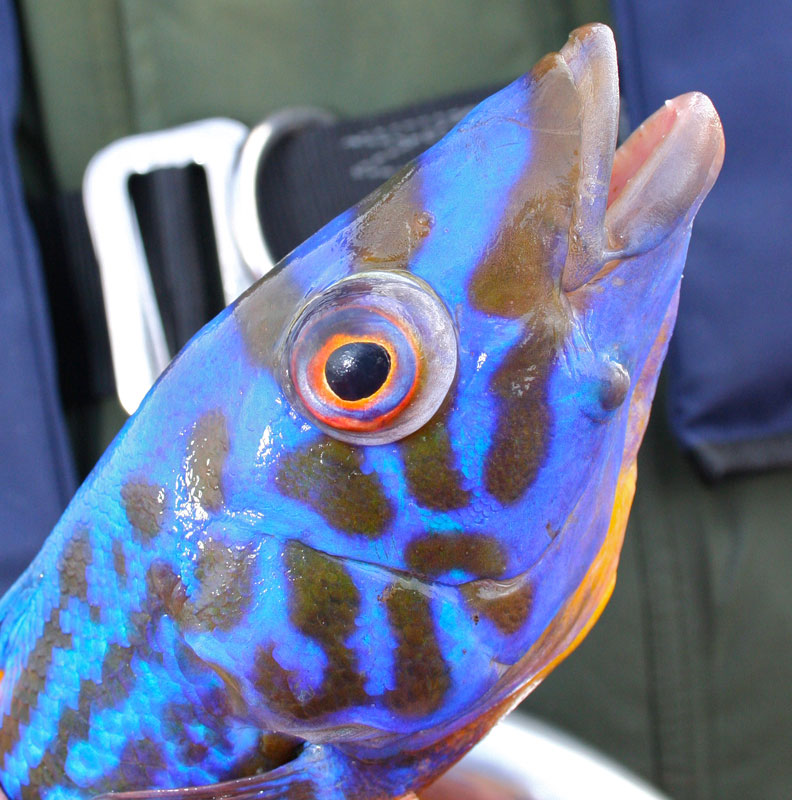 Feeding is predominantly on crab, mussel, shrimp and worm. Ballans are also partial to limpets, clamping to and prising them from rocks with those strong gnashers. Small pieces of mackerel are preferred for catching cuckoos, while ragworm, peeler crab or small whole hardback crabs are best for the ballans.

Wrasse love rough ground and cover. Habitats are typically tackle graveyards of weed covered ledges, rocks, and boulder fields. Similar to bream, during the general mating season between May and August, females build nests of weed, mucus and algae.

Boat fishing for wrasse can be very productive on the drift. Typically fishing grounds will be relatively close to shore, in below 60ft of water. The rocky ground is often depicted on the sounder as a mountain range with many rises and falls in tight areas. 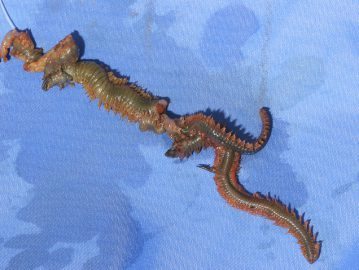 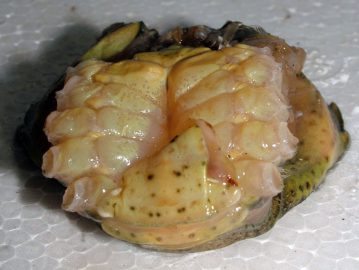 Wrasse provide a real thrills-and-spills fight on the correct tackle. They hit hard, and twist and turn all the way thereafter in the struggle for freedom. Rods do not need to be poker stiff, and 20-30lb rods are overkill in a very one-sided way. The most successful wrasse hunters extract maximum enjoyment from the fish with much lighter tackle. On the drift, wrasse will attack passing baits and power away with their lunch. Stiff rods married to braided lines often wrest the bait from wrasse before the hook has time to penetrate the mouth.

A boat rod with a softer action, or a spinning rod will help cushion the initial wrasse attack, allowing time to hook and play the fish instead of unwittingly driving it away! Downtide wrasse rods shouldn’t be heavier than 12lb class. Uptiders of the 2-6oz ilk also fit the bill and are widely used, but there is even better kit for the job now. In recent years, rods with highly sensitive tips have really proven their worth. Bite amplification and sheer sport on rods such as the Conoflex Sensor Tip, Fladen Maximus Sensor and Abu Premier Sensor is simply taken to a different level of exhilaration. Often 10 – 12ft in length, these rods are much longer than your standard boat rod, but after a little practice are no harder to use. 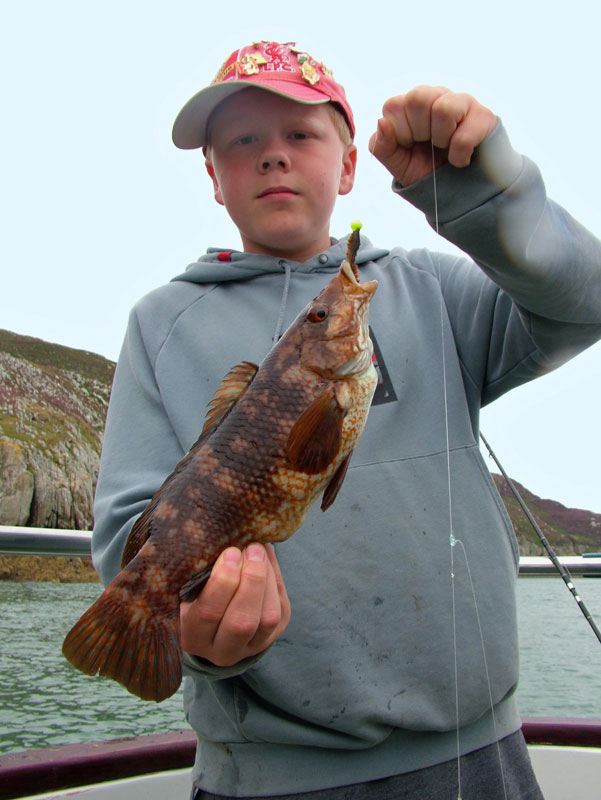 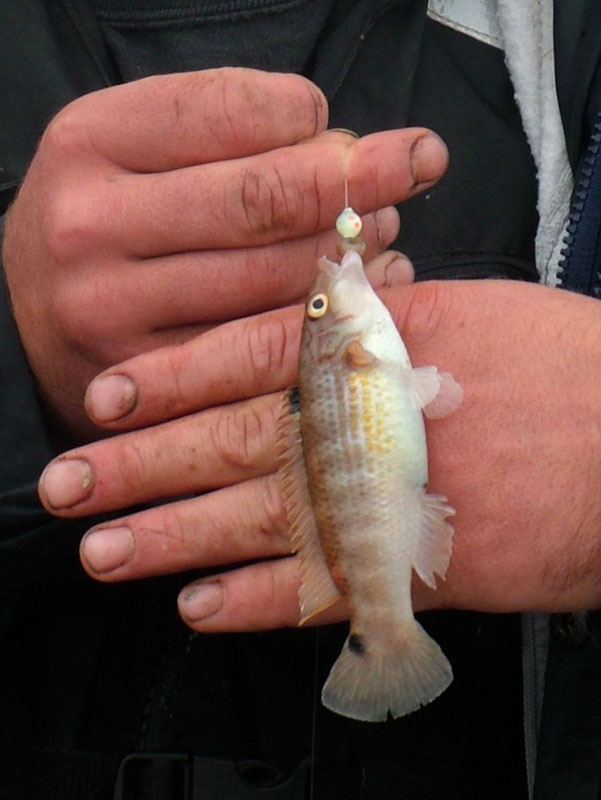 Rig choice and the number of hooks used depends and varies according to drift speed and just how snaggy the bottom is. Working to a three-hook premise – the rig can be either a paternoster, with all hooks safely above the lead, or a three-down arrangement (all hooks trailing below the lead) as I prefer. In both instances it is advisable to use a rotten bottom weaker mono link between lead and rig – so if stuck fast in a crevice the lead can be broken off without sacrificing the rest of the rig or an attached fish.

Hook sizes and baits likewise vary. If fishing for 6lb plus specimens, bigger 3/0 – 5/0 hooks should be used with similarly big baits such as whole peeler crabs and hermits. In such ‘specimen’ instances a single hook rig should be used. But for straightforward everyday wrassing, or perhaps in a competition where fish numbers are important, look at using ragworm on hooks between size 2 and 2/0. Many serviceable hook patterns exist. Varivas, Sakuma and Mustad have their followers but I can’t see past the Kamasan B940 hook. These are extremely sharp, and can also bend out of snag should they get hanked. 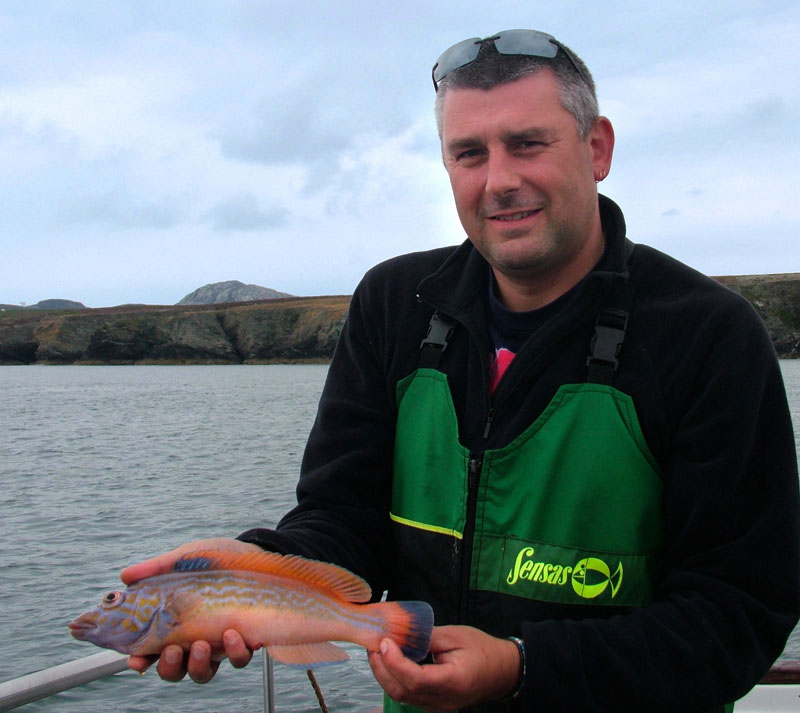 Three-down wrasse rigs tend to be 4-6 foot long as standard, but the rig I use is often only 24 inches. Credit for this wrasse super-rig goes to Scottish International Pete Redshaw, who gave me a real lesson in wrasse fishing at the 2004 Home Internationals. Built from 50lb mono, the first hook is fast up against the lead, with the second hook barely 12 inches away, and the third with a small silver spoon a further 12” away on the point. This ‘no prisoners’ rig lies flat in the tide, keeping all hooks firmly on the bottom where the wrasse are.