Without a doubt the waters of the New England coast offer some of the best saltwater fishing anywhere in the world. With stripers, blues, tuna, cod, haddock and a host of others, who could ask for more?

With all of that said we all need to acknowledge that there are some fish that don’t inhabit the cold waters of the North Atlantic. One of these fish is the snook and it was this fish that drew me to the Gulf Coast of Florida, Naples to be exact. This was my first time to Florida, believe it or not, so this was going to be a learning experience all around.

It was 6am when I met up with Capt. Peter Root at the dock. Peter is the owner of Naples-Fishing Charters and it was he that would be taking me out. As soon as I loaded my gear we were off. While I usually like to use my own gear, on this trip my rods and reels stayed at home. Capt. Root has a complete set up and I was more than willing to use it. What I did bring was my Yeti Hopper cooler and my Hodgman raingear. The cooler was for anything we happened to bring home and the raingear was to keep me dry in the unpredictable Florida weather.

We decided to try to catch some bait and then go after snook. This was educationally enriching for me as I had never seen someone use a casting net first hand. According to Peter the bait of choice was greenback herring and it wasn’t long before we had a live well full of lively herring and were on our way to our first snook location. 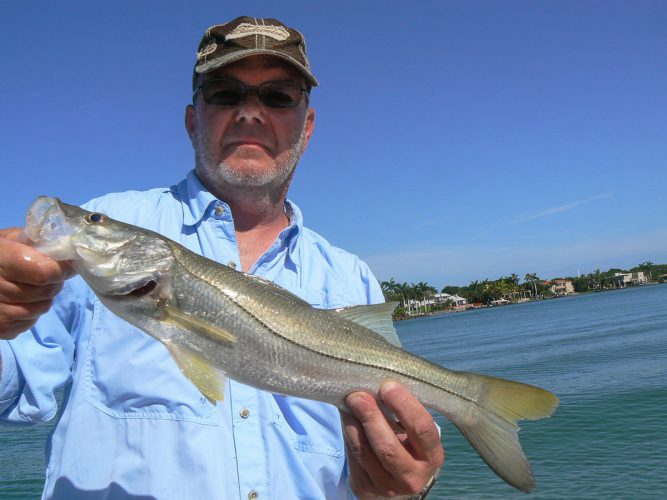 Our initial spot was along a mangrove edge where Peter set up our gear. Here we were using light gear which consisted of St. Croix medium to medium-heavy rods coupled with Penn reels. The reels were spooled with 30 pound test braided line, onto which was tied a 20 pound test fluorocarbon leader. Peter used a circle hook Peter to secure one of the choice herring. For the most part I am a lure angler, so using bait, especially the size we would be using, was a little different for me. It took me a few casts to get the hang of putting the bait where I wanted it to go and not get hung up in the mangroves.

Peter explained to me that snook are found in the shallows and relate to structure, so there was a good chance to hook into them at this location. Armed with that information I made my casts trying to get my bait as close to the mangrove roots as possible. We also targeted the areas of shadows that provided the fish with the illusion of security. 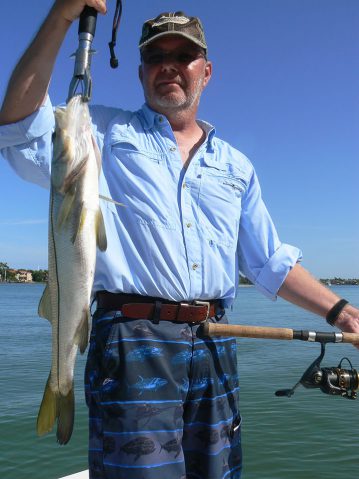 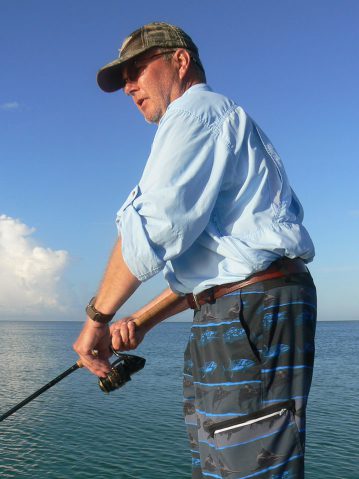 I started seeing swirling water and boils out away from the mangroves, in more open water, so I decided to make a cast in that direction. I felt the herring on the end of my line dancing frantically as if being threatened. All of a sudden my rod bent in half. I hauled back and set the hook the best that I could. This was no snook that I had on the other end of the line. Whatever it was it was heavy and felt like an anchor and it was going to be a match for both me and this medium action rod. I had the fish on for a minute or two and then it was gone. Peter told me that it was a good chance that the fish was a big catfish but I guess we’ll never know.

Packing up we moved to an area of private docks around some very expensive homes. This is where we contacted the snook.

Casting under the docks and around rock walls I picked up the first snook of my life and it measured a little more than 22 inches. Prior to that fish I asked Peter whether snook hit hard like redfish or do they tap the bait a few times before taking it? He told me they smack it and I will know when there is a fish on. Well, he was right as that first snook hit hard and felt like a much larger fish than its revealed size.

After a couple of chasers we moved once again, this time back to the mangroves. The next snook measured about 24 inches and then another two around the 22 inch mark. This same area produced a small barracuda that was lost at the boat. It also started to produce Jack Cravalle. Though these were not big jacks, only weighing a few pounds, they were fun to catch. 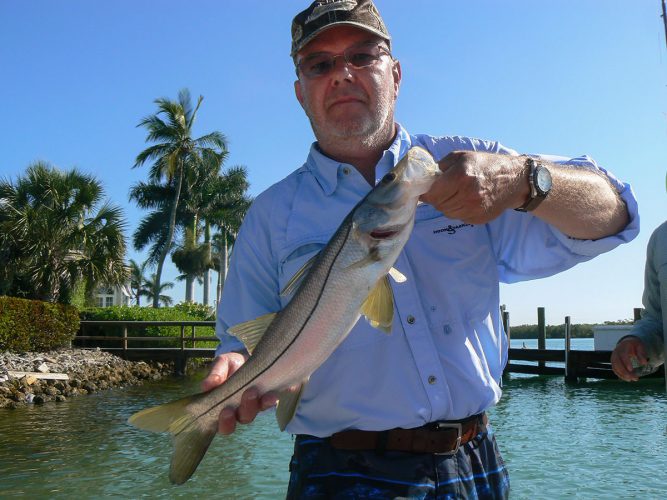 All too soon my fishing trip came to an end. Though the fish I did catch were not huge, I had a great time catching them. I got to fish with a great guide and catch some fish we don’t have back home. I hope to get back to Florida soon so I can try this again.

Capt. Peter Root’s guiding services were excellent, keeping a snook novice right during my first tentative efforts. He can be contacted through Naples-Fishing Charters website or by email.