Last Monday Rob Brown fished the Gynn Wall with his lad Nick who had his first ever fish. Fishing close in with fresh black on the incoming tide from 10pm to 12.30 they had doggies and codling to 3½lb and lost a belting codling about 6lb in the swell.

Lee Smithson fished the steps opposite Royal Venue and had a dozen codling with half being over size limits, although all were released. 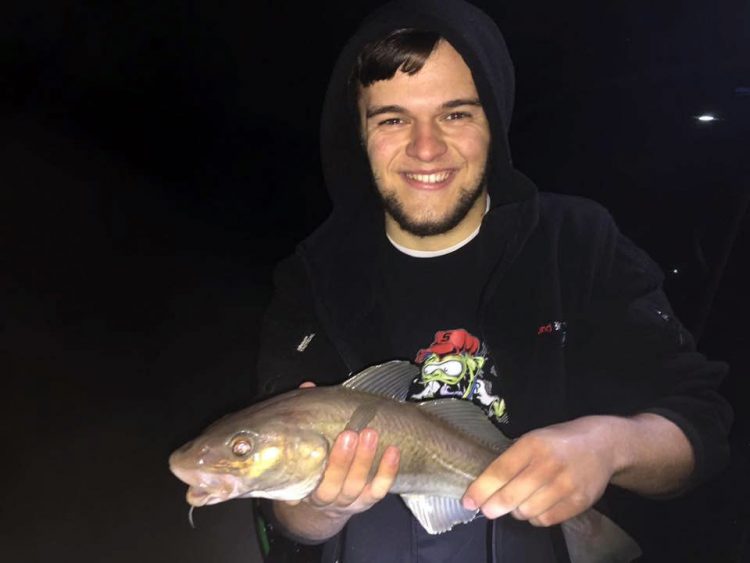 Last Tuesday Dave Brown fished Rosall over low water and despite the rain he had three codling the biggest dead on 2lb. He also had nine dogfish, with a double on the same pennel rig. He then had a short session at Cleveleys but the sea started breaking over the top and gave up after another couple of codling and a few whiting.

Rick Pennington and John Carden enjoyed a Monday late night session at Gynn. It was very rough but just fishable and they found a stretch where the waves weren’t coming over the top. Five minutes after the first cast a 38cm codling hit and was quickly followed by one of 36cm and four whiting. The weed appeared an hour before high and was nasty for about 45 mins but once the tide turned the weed moved on and the fish returned. He had four more codling and a dog in the last hour before shooting off home when the rain came about 3am. Baits were fresh blacks on a two hook rigs with size 1 hooks fished medium range. Two fish were retained as they were deep hooked but everything else swam off to return when bigger.

Last Wednesday Mark Thompson reports he had a session with Martin Foxcroft at the Sea Cadets. from the off Martin was into the whiting and did so all afternoon with a few codling. Mark also had a few whiting and seven or eight codling, a good day for both.

Aaron Walsall fished last Thursday and landed, in total about 35/40 whiting, one dogfish and dab at Five-bar. Disappointed not to find the cod but looking good better for next week.

Dave Brown was back out on Thursday, this time at Cleveleys over low water using fresh, un-gutted worms on a pennel rig. He had a dogfish within minutes of lobbing out which was followed by another dog and on and on and on there were loads of dogs about. He was again catching two dogfish on one snood! Eventually, some whiting turned on the flood up to break the monotony of the stream doggies and soon after he had his first codling. He finished with six codling, eight whiting and about a million dogs, the sea was packed with fish.

Marc Whittaker reports that he had a good afternoon on Marine Beach with nine plaice and three flounders all on fresh worm from Jordan Russell at Bispham Angling. 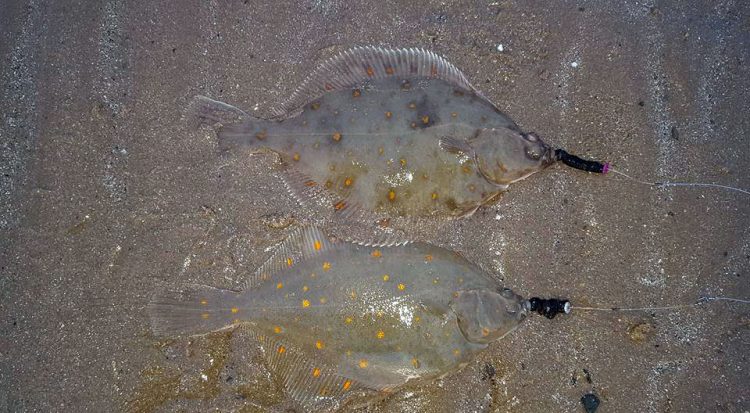 On Wednesday Chris English fished the Sea Cadets with Chris Minto and Chris Fisherman. They fished it in and out over the tide and he had four codling, two keepers and a keeper bass together with a whiting. Chris Minto had a whiting saving his blank, unlike Chris Fisherman, sorry boys.

Rick Pennington was on the go again later in the week at the Gynn Wall with Darren Gillies and Glyn Hopkins. Great weather and good fishing rarely go together, but today was a nice surprise considering there was a very calm sea. They ended up with 22 fish between them with five species, whiting, doggies, flounder, a dab and a nice bonus codling for Rick into the ebb. All Rick’s fish were at long range today, the continental rod working 5 to 80 yards out produced nothing whereas the blasting rod had 11 fish at 120 yard plus. Baits were fresh black tipping with squid did the damage on the whiting and dogs.

On Sunday 16th October Darren Gillies and the Blackpool & Lancashire Anglers fished their RNLI match. Darren reports that there was an excellent turnout on a horrible day and everyone can be proud that the event, held on the Gynn Wall, raised £818 for the worthy Charity.

Unfortunately, the fish did not show up and only three were caught by the 40 anglers, which made the paperwork easy for Darren. The winner of the trophy and Anyfish Anywhere rod was Ian Shackleton who’s 57cm dogfish also took the pool for the biggest round fish.

The prize for the biggest flatfish went to D Stericker’s 27cm flounder.

The Zziplex winner was Nigel and all the administrators of Blackpool & Lancs Anglers will be attending a presentation of the money raised to the RNLI in a few weeks.