Terence Gargan fished the North Wall Heysham with Bert, Simon Glenn, Jeffrey Dixon and they enjoyed a great evening. Terence was first in with a plaice before high water they also had a few dogfish and whiting. With onset of the ebb it was dogs galore with double headers of whiting and dogfish. Bert managed seven fish after a slow start while Terence lost four fish reeling up the wall in addition to those he landed. Fresh black lug, mackerel and crab were the killer baits.

Paul Goodchild took his lad on his first sea fishing trip knowing there were a few whiting about to provide a bit of fun. They ended up having a variety of fish in the including a nice codling. They finished with five 5 codling up to 3lb, six dogfish, a dab and 25-30 whiting all on Bispham Angling’s fresh worms. Needless to say, Elliot absolutely loved it, another future angler in the making. 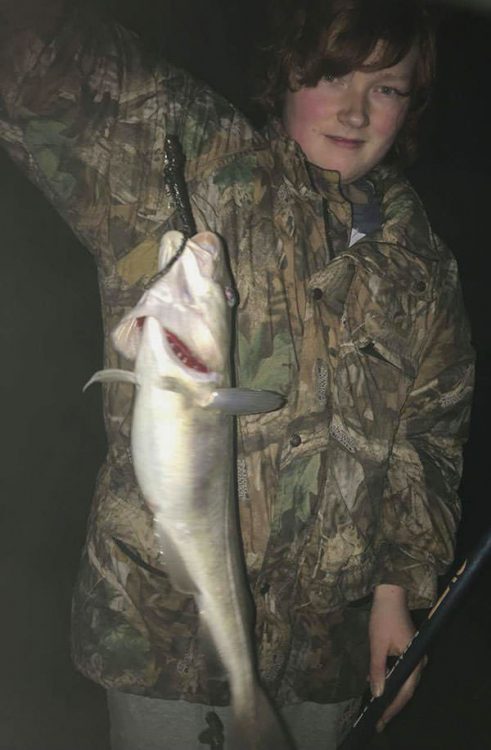 Last Thursday Rick Pennington had a bit of fresh bait and so the plan was Rossall and looking for codling. After the worst journey ever, from St Annes to Rossall that took 90 minutes and tailbacks at every set of lights they finally arrived on the beach. The first hour was mad with double headers of whiting, good size, and a 38cm codling. It then slowed down to just the odd pins and smaller whiting for the rest of the session. His mate John missed a couple good slack liners and also landed one codling.

The Lancashire Sea Fishing and Bispham Angling match was fished last week and Jordan would like to thank all those who took part. Thanks also to Martin Foxcroft, Steven Prior, Mark Thompson and Joe Green for their assistance. Cheers also to Kevin Fletcher for the horn that sounded like a fart! A total of 49 anglers fished the event, a great turnout considering it was the first ever night match.

First place went to David G Hutchinson with a whopping 771cm (27 fish) winning £122.50. Runner-up Lee Thornton had 477cm (18 fish) and lifted £85.75. Tony Baxter was third with 419cm (14 fish) and won £36.75. The longest fish prize, donated by Dave Wilson was won by Tony Baxter with a dogfish of 64cm. Species that where caught in the match were mainly whiting but the competitors measured a few dogfish, flounders and codling.

The next match is Sunday the 20th November. It will be up on Facebook next week and also in the Bispham Angling shop.

Lee Smithson fished the beach last Friday where he had 26 whiting and one dogfish. He had enough just after high tide as there are only so many small whiting you can handle for one night. Andrew Molyneux had a good night with two 2 dogfish, one was a fatty, a couple of codling and whiting.

Boss man Jordan fished Cleveleys Prom last Saturday with Steven Prior and Mark Thompson. They found it difficult to get past the dogs and whiting one a chuck but Steven did manage a thornie. 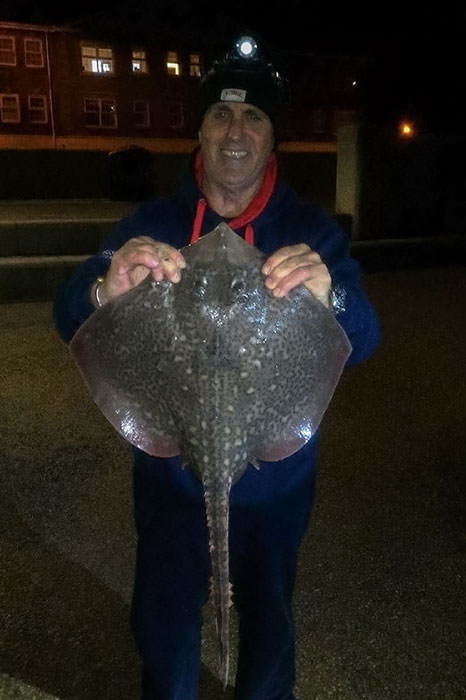 Reece Medcalf reports that he fished Cleveleys last Sunday with the CIU league. It was a great day, lots of whiting and dogfish. He learned lots from his uncle and team mate. Impressive seeing double headers of dogfish coming in. Mark Bebbington had a bit of a session on the Gynn tonight where it was a flat calm and warm night for the end of October. He had seven doggies and eight whiting, all caught on fresh black and sandeel, not bad for 2½ hours.

Andrew Riley fished a club match on Sunday at Preston bullnose, the first time he has been out fishing for five weeks. 16 members fished and the fish were about from the off. He had seven flounder and a small whiting. Fred won the match with 24 flounders and Norman was second with 22 fish.

Fishing matters were put into perspective when they heard word that a skipper was taken ill out near Rossall. Joe would like to say a huge well done to all the boats from all the different boat clubs that helped Mr Cooper get to shore as fast and safe as they could to a waiting ambulance. Sadly, word spread around high water time that Allen Cooper, a new member of the Wyre Boat Club later passed away in hospital. Thoughts go out to his family and friends.

Fleetwood and District Angling Club held a match last Sunday with a turnout at Beach Road, Fleetwood. Judging by the litter left by so called anglers the mark has been fished a lot lately. The weather gods were not to kind as the sea flat and the hoped-for codling did not turn up. Single dogfish were caught by Bob Marsh and Andy Eccles; the rest of the catch was made up of whiting with the largest making 35cm for Ken Forrest. Everyone managed to catch and the most productive bait was blackworm tipped with fish strip.

Blackpool Boat Angling Club member Stephen Richardson that he fished front of the View and had about 30 cod with around 15 good keeping size but only took a couple for dinner. There were also a few thornbacks, whiting, dabs, a pouting and doggies to keep him busy all day.