For the second year running Des Westmore and family returned to the Catalonia Riviera Maya hotel at Puerto Aventuras in Mexico. They’d had a great time on the previous trip but hadn’t covered everything they planned to and of course, Captain Rick’s charter outfit is a only a ten minute walk from the hotel and the fishing starts almost as soon as you leave the marina. Who wouldn’t want to return to this fishing paradise? 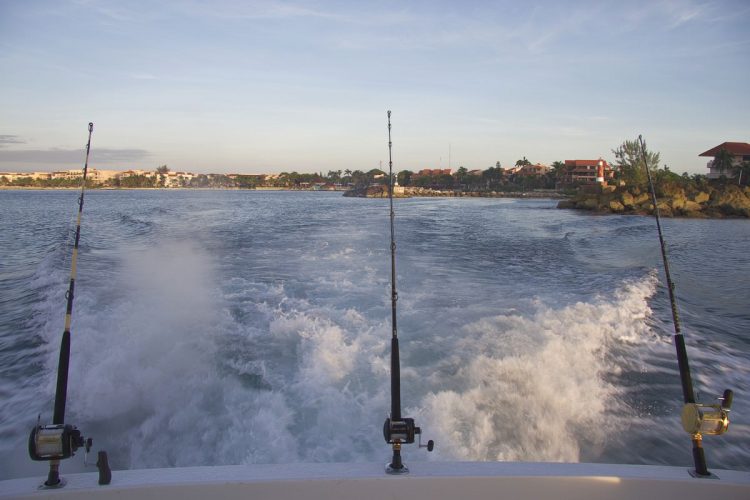 The fishing starts almost as soon as you leave the marina

For our trips we requested our previous year’s skipper – “Flaco”, although I am sure all Captain Rick’s skippers are good Flaco had put us on the fish previously so it seemed the wise thing to do. We were travelling at the end of the year which is not the optimum time for trolling in the area but we weren’t worried as we enjoy bottom fishing which is pretty consistent all year round. It is usual to do some trolling on the way to the bottom fishing marks so as not to waste any fishing time so this meant the first job was for deckhand “Nestor” to prepare a selection of ballyhoo baits. The skillful way that he rigged the baits made it obvious he had done this before and it wasn’t long until we had our first hit. 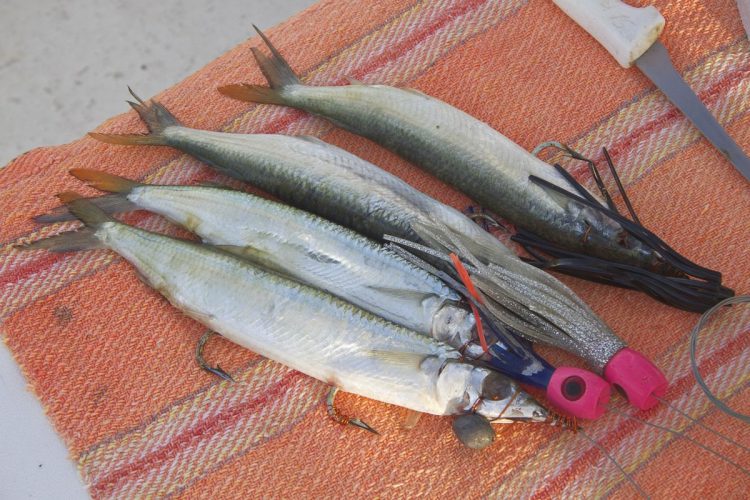 A selection of rigged Ballyhoo

My daughter Bronwyn always takes the first fish when trolling and no sooner had she grabbed the rod than we had our second hit which my wife, Marilyn, leaned into. This was great, we’d only been fishing ten minutes and already had a double hook up. As the girls got to work on their fish, it soon became apparent that something was wrong. At first I thought the lines were tangled but then it dawned on me; there was only one fish, a greedy barracuda, and it had hit both baits. An unusual start to the trip that got me wondering if was to be the shape of things to come. 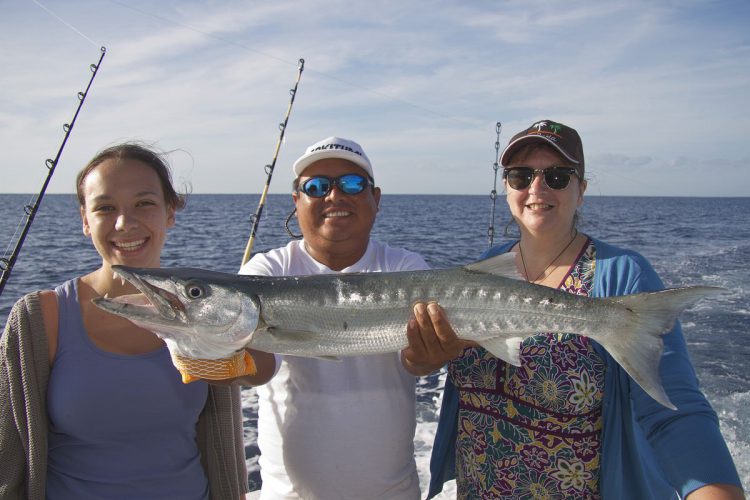 We started fishing again and very soon I was reeling in my first fish of the trip in the form of a small skipjack tuna. It was nowhere as big as the barracuda, a fact I was not allowed to forget. We trolled a bit longer than we planned to as there were some huge rafts of weed floating around and we hoped to make contact with a Mahi Mahi which love to hang around under cover of the weed. Despite the perfect cover for them, it wasn’t really the right time of year and we struck out on the Mahi Mahi but did get more barracuda and skipjack tuna before we switched over to bottom fishing.

Marilyn and Bronwyn used 12lb class outfits supplied by Captain Rick’s while I used my trusty Conolon travel up-tider and Abu 7000. Terminal tackle was simplicity itself in the form of a drilled bullet and some heavy mono ending in a small but strong hook. I had brought with me a selection Veals Chinu and Tronix Pro Big Dogs in sizes from 1 – 2/0. Both patterns proved perfect and I left all the hooks we didn’t use with Nestor and hopefully they have pulled in plenty of fish in our absence. 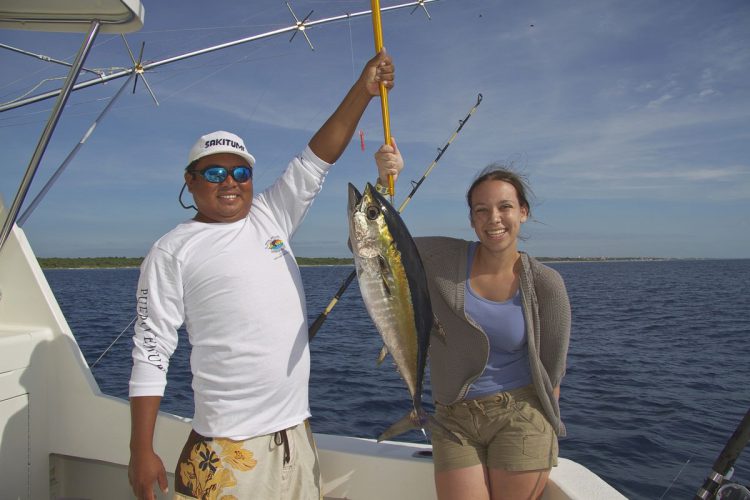 Using strips of ballyhoo and skipjack tuna we soon had some small fish in the boat. On our previous trip, we had loads of trigger fish so we were surprised when none put in a appearance. Bronwyn was fishing a long strip of ballyhoo and was reeling in slowly to check it, a technique that resulted in the mid-water hook-up of a horseye jack on our previous trip. The method worked again and her rod buckled over as what was obviously a good fish tore off. Bronwyn was doing a great job of playing the fish but had recently had surgery on her elbow so had to enlist a bit of help with the rod from mum. Between the two of them they got the fish under control which turned out to be a blackfin tuna of around 20lb. Not only was I now very happy as we had our first “proper” fish of the trip, but I was also drooling at the thought of eating it. 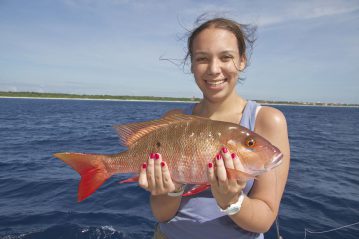 Bronwyn with the first Red snapper of the trip 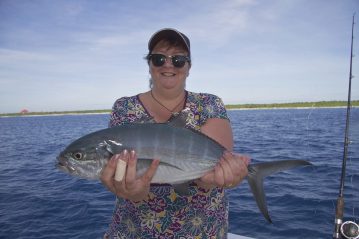 Marilyn with a nice Jack

Our next fish was a nice jack for Marilyn, closely followed by a red snapper for Bronwyn. We also had a selection of strawberry groupers which proved more than willing to take big baits, even whole ballyhoo. It was as I was taking a picture of a particularly greedy grouper when Marilyn gave a shout that she was into something that was heading for the horizon. She battled with this for around fifteen minutes and the fish was just getting near the boat when it shed the hook. We were all gutted. Flaco and Nestor felt it was another blackfin which would have been bigger than the one we already had in the boat, damn!

A sucker for a remora

Not long after, I was just dropping my bait to the seabed when something hit it about thirty feet down. It was running and twisting all over the place and every now and then I caught a glimpse of what looked like a smoothound in the clear water. I thought it must be some kind of small shark but when I got it in the boat it turned out to be the most unusual fish I have ever caught; Nestor called it a “Sucker Fish” which is the local term for a remora. I have seen these loads of times stuck to sharks but never dreamt I would catch one and never realised they got as big as the one I caught. The “Sucker” on its head was amazing. That was pretty much the end of our first trip and we repaired to the “Hippo Bar” in the marina. This bar does a superb job of cooking up any fish you take there and we sat outside and planned our next trips. 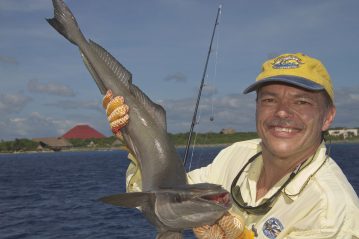 Des and his remora 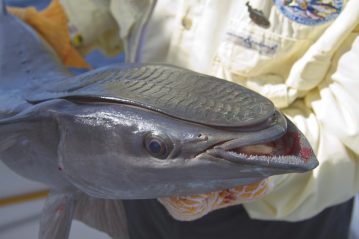 Those trips proved to be similar to the first one except for the weather, which became a bit more unsettled at times. In fact, the horizon would look like something apocalyptic, then the swell would build, then an hour later we would be in the blazing sun again. Strangely, despite the ominous skies, it never rained. Bronwyn managed a nice double-shot of skipjack tuna which gave her the run around while I pulled in a treble-shot of blackfin. OK, they were like big mackerel but as far as I was concerned, I had a treble hit of tuna and that is all that mattered. At the time of the trip, I had just turned fifty so my daughter kitted me out with the biggest butt pad she could find on board to give the “Old Man” some help, thanks for that! 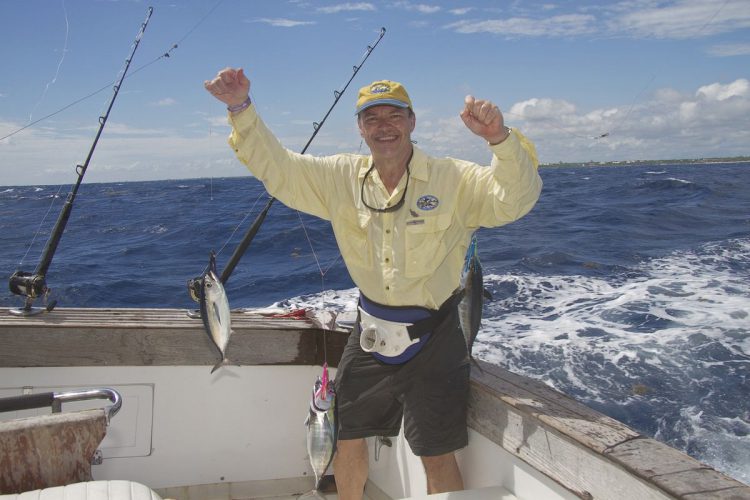 Des gets a treble hit of Blackfin tuna

Bronwyn bagged another unusual, if a tad dangerous, fish, this time a lion fish with its array of poisonous spines. We also managed some lovely snapper and grouper which meant another trip to the Hippo; it’s a tough job but someone’s got to do it. Finally, I did get a trigger fish, it was the only one of the trip; so different to last time. As is often the way in the Caribbean there is a resident population of tarpon in the harbour but we were not expecting to see the spectacular spotted eagle ray that swum by when we were back on the quay. 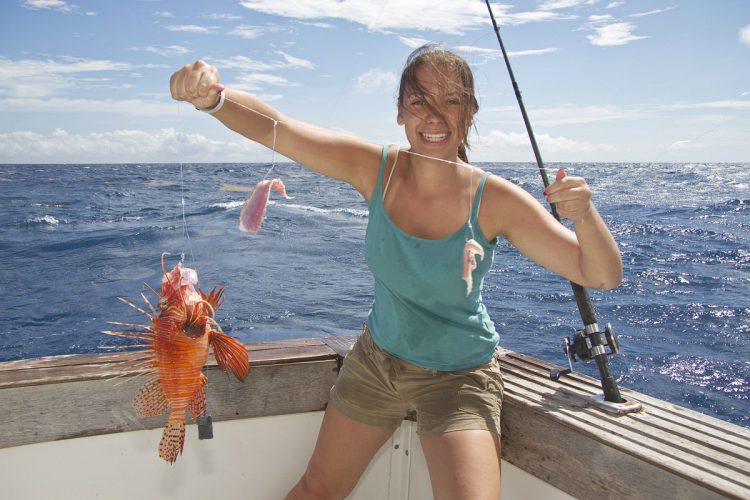 Time to be careful – the poisonous lion fish

Fishing at Puerto Aventuras is year round and Captain Rick’s offer a selection of trip durations in a variety of boats. Glenna and her husband Bob are both very helpful and you can join a fishing group as an individual or charter the whole boat for yourself. There are too many options to list here so the best thing to do is look at Captain Rick’s web site. The Catalonia Riviera Maya is an all-inclusive hotel and spar located in a secure gated marina community. The beauty of this combination is that you could travel here with a bunch of angling buddies for a full-on fishing holiday or, as I have done, combine it with a fantastic family holiday and you won’t waste any time travelling to the boat or the fishing grounds. If you don’t fancy sitting in the sun with a drink when not fishing, there is lots to do and the snorkelling is excellent; I would definitely recommend swimming with the turtles at Akumal. There are also plenty of Mayan archaeological sites to visit as well as theme and water parks. 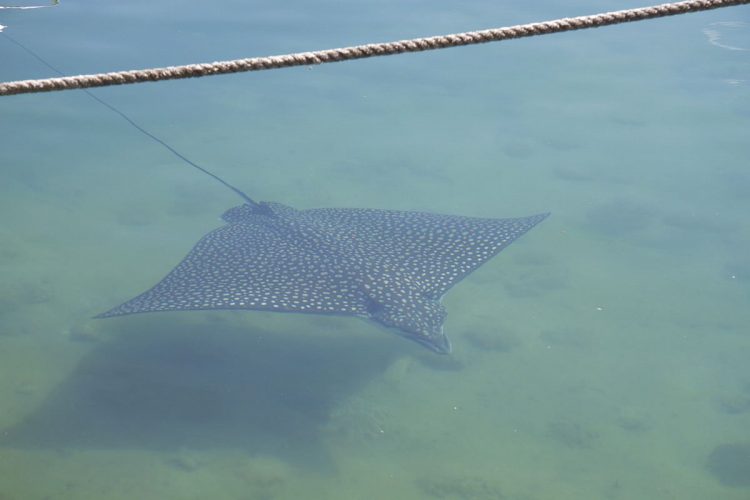 There is no need to take any fishing gear but for if you want to, for the bottom fishing I would recommend a 50-100g spinning outfit and a 6-12lb class downtide outfit. A few small leads, small strong hooks and some 40-50lb trace line are all that is needed. If, or rather when, I go again, I will definitely pack some speed jigs as I think we could have made contact with some more tuna if we’d had them. I haven’t tried it but I would think LRF fans could have good fun too. Unless you’re really into trolling, I wouldn’t recommend taking that gear as it will seriously eat into your airline luggage allowance.

Talking of airlines we travelled independently on this trip using scheduled Virgin Atlantic flights into Cancun and booked the hotel using an on line agency but both Thomas Cook and Thomson offer package deals to this hotel. 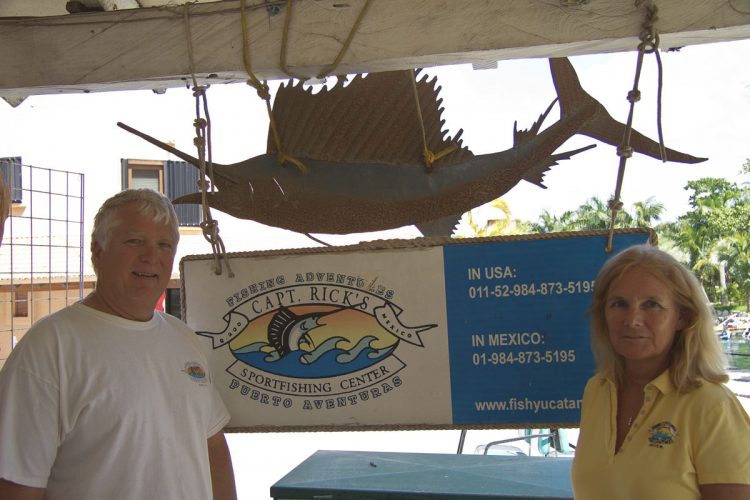 Glenna and her husband Bob, the rightly proud owners of Captain Rick’s