Alex McDonald works on the world famous Red Gill brand of lures and is one of a number of anglers charged with putting all new prototypes through their fishing paces. His latest task was to get afloat and tow some frighteningly Pink Evo Sandeels past the noses of big West Country pollack.

Much of my boat fishing time is spent over offshore English Channel wrecks aboard commercial rod-and-line boats. In fact, I learnt how to fish for pollack under the hypercritical eyes of commercial lure fishermen for whom failure is not an option. But if you want to learn how to catch pollack, or if you want to gauge the merits of any new lure, then there is no better place to do it. 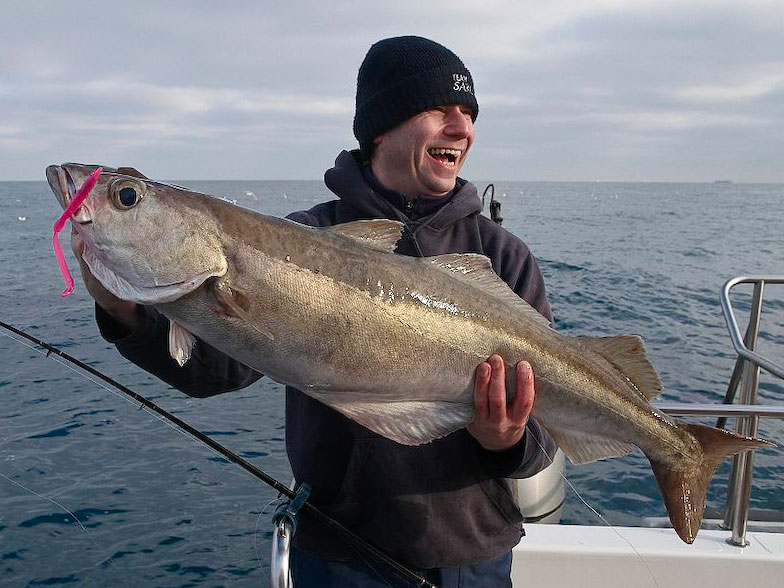 The weather gods have been kind to me this winter season and I have managed several trips on those same boats to chase down big aggresive pollack. I love this kind of fishing, but I also use the time afloat to trial any new lures that Red Gill have in the offing.

At one time, amongst south coast commercial fishermen anyway, the original large size black Red Gills presented on long flying collar rigs were thought unbeatable for pollack consistency. Black would routinely out-fish other colours worked over the rusting ironworks. Times and things change however, and the face of boat pollacking certainly altered with the influx of soft plastic shads and worms from the USA.

Most of the new soft lures were of American origin, and it is fair to say that even now the UK lags behind the States as far as general lure development, wider fishing applications and techniques go. The flood of new American soft lures came in a kaleidescopic assortment of colours which UK anglers were falling over themselves to try. These ‘soft baits’ quickly proved deadly for pollack, cod, and more latterly for bass. The even newer revolutionary weighted soft lures have proved killers for all three species, and these days you rarely see plain black lures used.

Changing fashions perhaps have a part to play, but colour black has been successfully progressed to two-tone fire-tail and Afterburner designs, with the black backs and contrasting bright tails massively popular. The choice of lures and colours is now vast, and acknowledging angler demand for a weighted Gill, the Red Gill company introduced the EVO range of imitation sandeels which come in some great new colours.

EVO is short for Evolution, and the lures have been tremendously well received. The EVOs differ from standard Red Gills in that they are fitted with an internal leaded hook, with the eye protruding clear of the top of the lure more-or-less between the eyes. They are constructed from a softer, more supple material which provides a fantastic ‘live’ swimming action and is much, much tougher than the vast majority of other leaded soft lures on the market… most are inclined to shred and fall to pieces after just a couple of fish. 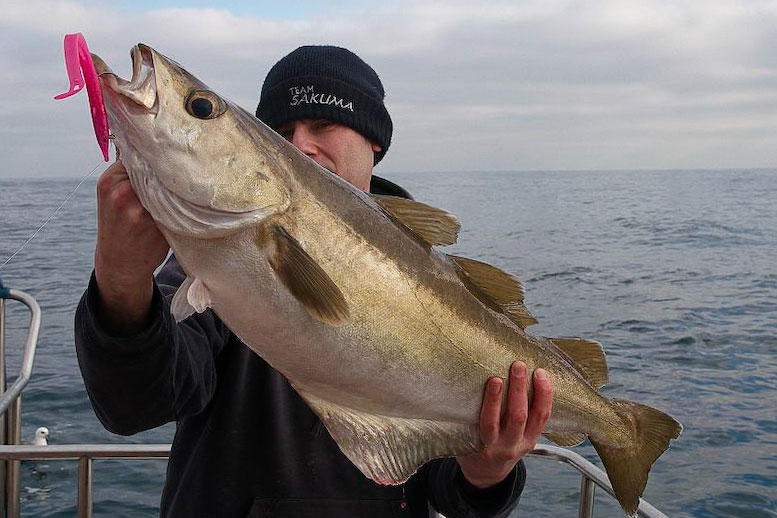 Typically, orange, red, pearl-bellied and mackerel colour patterns enjoy huge popularity today, while at the other end of the spectrum certain dead-duck colours are non-starters. You don’t see many anglers scrambling for dirty brown lures for example. Why? It might be simply because brown isn’t eye-catching enough, or it doesn’t have the track record to drive sales… and it never will of course unless anglers give it and other equally unlikely colours a fair go.

From the Red Gill company’s perspective, pink is one notable colour that has gone under the angler radar. Pink has never been popular around the UK, perhaps because it has traditionally been seen as too ‘girlie’ for anglers who munch meat pies held in hairy hands. And I’ll admit to surprise when a chance meeting with a well-known international boat angler revealed that he used small bubblegum-pink eels to successfully target pollack and cod on inshore reefs. This interesting information was logged and I quietly wondered if pink would work well on the offshore wrecks? Red Gill had just launched the first EVO lures and various new colour additions were being investigated… pink was quickly added to the list. 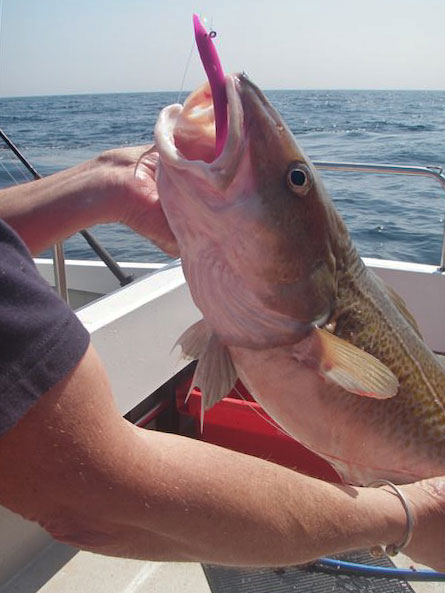 Some milky pink Red Gill EVO samples finally arrived on my desk, but I viewed them with a somewhat sceptical eye. I worried over the fact that it was full summer at the time and there were good numbers of cod on the wrecks. The scoring lures were lead-headed twin-tails and various weighted red/yellow shads. There wasn’t any mention of pink power.

Everything at Red Gill is thoroughly tested before being progressed to full production, shelved for further development, or dropped. So saying, I had the new ‘pinks’ in my tackle box when I stepped aboard the boat for a spot of wreck codding. I tied a milky pink EVO on to a hopper-style rig with a little trepidation, trying not to let anyone see my ‘lovely’ lure… and failed. Instant brutal abuse followed, but was short-lived.

I connected with a solid weight within the first five turns, followed by the unmistakable head shaking of an angry cod. This pattern was repeated more or less all day. My limited amount of pink samples was soon depleted as the other anglers onboard begged, borrowed and stole them from me! The catch results surprised and impressed more than me.

I was keen to get more of these pink lures but there was an early problem. Investigation revealed that the milky tinge was the result of a reaction with the leaded hook inside the eel. Even though the imperfect colour caught fish exceptionally well, the rough samples required fine-tuning and further field testing before production could be approved. As you might imagine all of this takes months.

As the summer fizzled out attention switched to targeting bass with more natural-coloured lures and live baits. All thoughts of pink lures were put to the back of my mind for another time. Winter arrived and I was delighted to find a number of brand new vivid pink Red Gill EVO eels in a box of various samples ordered months before. Previous events came into sharp focus, and I studied the new pinks closely. The early colour taint issue had been cured, but I now fretted over the effectiveness of a slightly darker pink EVO. Would these adjusted lures be as effective as those that starred back in the summer? A subsequent cold weather pollack trip was to provide the answer.

My contacts assured me that the pollack had started shoaling on the wrecks and were feeding hard. I cobbled an excuse to dodge real work on a freezing Monday morning and hitched a ride on a friend’s Dartmouth-based boat. I deliberately only packed the vivid pink EVOs, which would force me to persist with them and not switch to some alternative colour should there be the temptation. 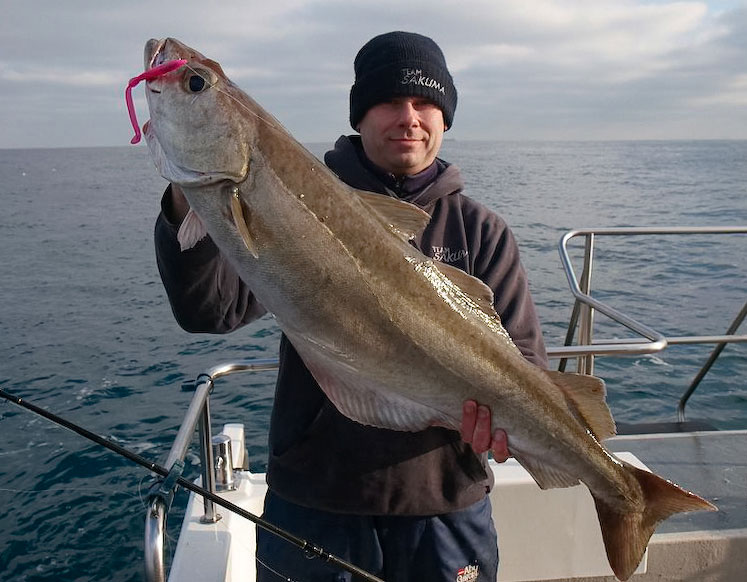 Despite what had occurred back in the summer, the results this time were still pleasantly eye-opening. As expected, the pollack were working higher in the water column and there was no shortage of them. Like clockwork, lures were accosted 18-20 turns up. In my book, the best bit about fighting any big deep water pollack is the exhilarating initial run… it’s an adreneline rush that I never tire of.

It turned out to be a thrilling day’s fishing. There were four of us fishing, and all rods were regularly bent into good pollack. In fairness the pink EVOs weren’t the only lures to catch, but by the close of play they had accounted for a silly number of fish, as once again the pinkies magically found their way onto the other guys’ lines. The pudding had been proved twice, and there was no ribbing this time as the crew willingly embraced ‘Club Pink’.

The pink Red Gill has now been added to the Evo range of lures and I suspect they will become a classic just like the traditional black version. Visit www.redgill.co.uk to see the full range of EVO sandeels and other Red Gill products.