Shore fishing around Shetland can be spectacular, but it remains a huge unknown as most local sea anglers take to the boats. Laurence Williamson, Mark Duncan and son Isaac fancied a spot of fishing at a little known sea loch, but what unfolded defies belief and boldly underlines the undiscovered potential. Be sure to check out the incredible video footage at the bottom of the page.

The unassuming little sea loch, located on the west of mainland Shetland, is barely more than a saltwater puddle with the narrowest of bottlenecks funnelling through to the open sea. It’s a marvelous place that receives little angling attention; indeed there are few venues that do around Shetland, as shore angling is very much a fledgling pastime here. Fishing this loch is a bit like casting into a bath but appearances are a deceit as double-figure cod and coalfish and large flounders are caught from this magic venue. Mark Duncan, his four year old son Isaac and I took a speculative trip to this particular place for the simple reasons that it is ridiculously accessible, as safe as houses, and a fine place to introduce a youngster to sea angling. 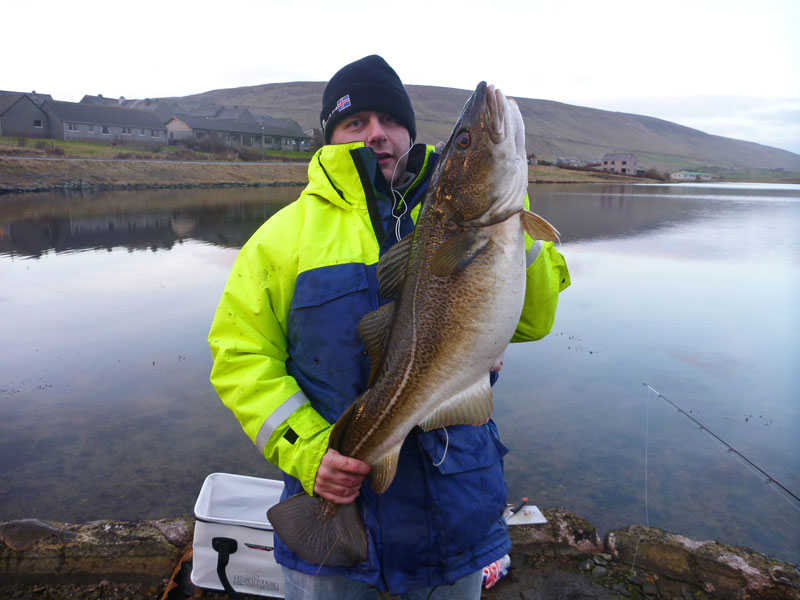 We arrived around 1pm just as the wind dropped away and the loch fell mirror calm. Mark and I spend a large part of our spare time boat fishing and it is safe to say that we are not regular shore anglers. My tackle set up might raise eyebrows but I don’t claim to be any sort of shore fishing expert. Appropriate or otherwise, I used a 10ft Penn spinning rod and Penn Captiva CV500 fixed spool reel loaded with 22lb Dynon braid. The rig was an old two-hook shop-bought effort that had sat in a drawer collecting dust for more than a decade. The hooks were small size 2 (yes, that’s right!) Mustad Limericks, while the lead was a plain 115g. Mark used a similar set-up, and a lighter outfit was assembled for Isaac. Ammo mackerel was our bait of choice simply because it was easy to lay our hands on at short notice.

Bites didn’t come straight away and it was some 45 minutes before I was winding in the first fish. A plump 1lb 4oz winter flounder put up a spirited fight and was quickly returned to the loch. I cast a little further this time in the hope of a coalfish, or maybe even one of those belting cod of local legend. Mark was getting bites but they came to nothing… might have been something to do with biggish baits on the small hooks. I had only just cast out, and had turned my attention to setting up a second rod when I noticed a firm knock on the one I had left fishing. 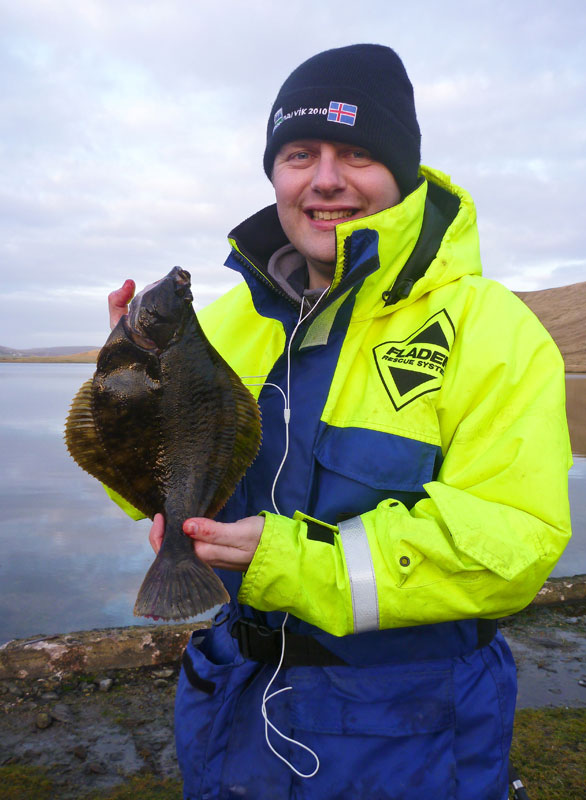 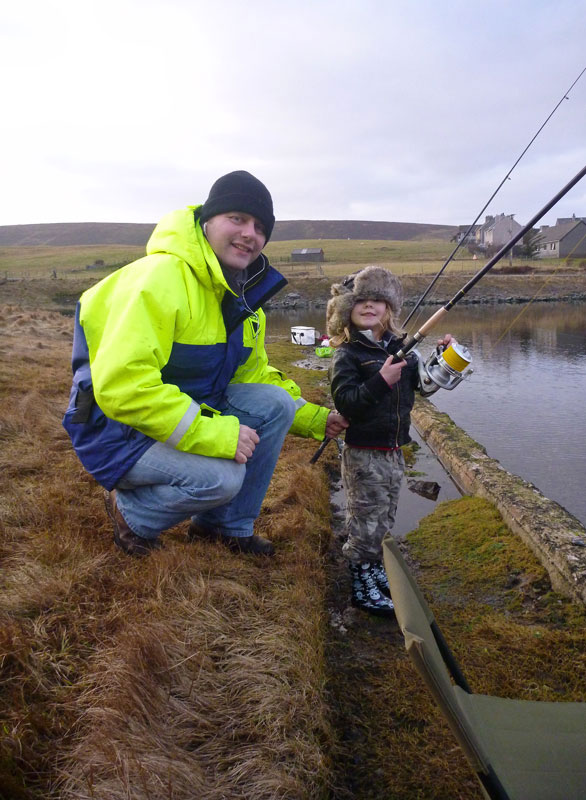 I grabbed madly for the rod, which pivoted precariously towards the water as something made to tow it away. There was real weight on the end and stubborn resistance that seriously tested the drag on the little Penn reel. You might have thought the spinning rod would be hopelessly out-gunned but in fact it held up well. The rod bucked and and the fish ground stubbornly sideways as stealing bursts of line were torn from the tightened down drag. I often had to resort to bracing the rod two-handed and just holding on, all the while teasing the fish closer and closer to the bank.

Big dorsal fins first sliced through the glassy surface some 40 yards out. The fins were so far apart that I first thought I had caught a considerable double-shot of fish. It wasn’t until the fish was at my feet that I realised that it was one mighty cod. It splashed wildly on the surface and was so unexpected that we then realised we had no clue how we were going to land it! Mark was videoing the whole thing and Isaac was jumping up and down with excitement. 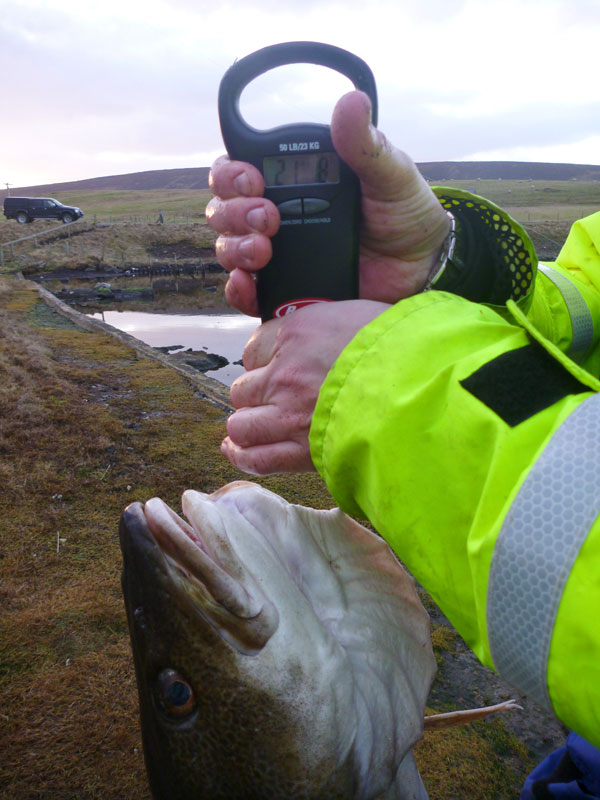 Ideally, I’d have been wearing waders and gone into the water to land the thing… but I wasn’t and I didn’t fancy wet feet when it was already bitterly cold. With nothing else for it I tried gilling the fish out while taking up tension on the rig with my other hand. Well the fish kicked and I dropped it, snapping the snood in the process… and for an instant the fish was free. Thankfully the water at the edge is very shallow and the pot-bellied cod was unable to easily swim away. I fell on it in a blink and finally managed to get it onto the bank. I later retrieved the mangled mini hook from the fish’s jaw, the picture of which makes this capture all the more special. To think that flimsy little piece of wire was all that connected me to such a fish makes me shiver.

The cod went a whopping 21lbs 8oz on the Berkley digital scales, and after some quick pictures it was safely returned to the loch. The cod was in excellent condition and fat with roe; it was most likely going to spawn within the confines of loch Hellister in the next few weeks. 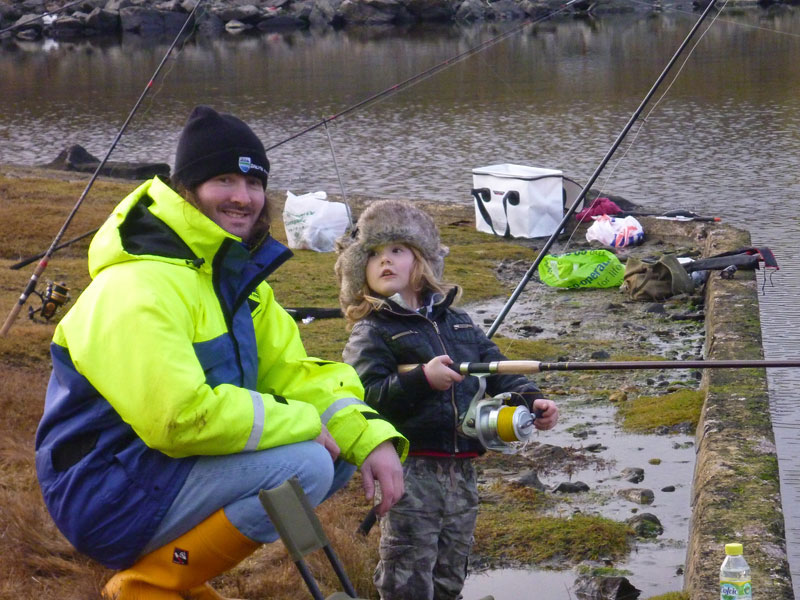 It took a while to calm down, but we eventually re-baited and recast the lines closer to the spot where the cod had come from. Both Mark and I experienced further walloping takes but none resulting in another cod. Isaac on the other had showed the older hands how it’s done, catching a near 2lb coalfish and his biggest fish to date. Trying to keep Isaac occupied, Mark had told him to try slowly retrieving his bait back over the bottom… and hey presto, it worked. And he did catch more than his dad!

With the temperature plummeting, we called it a day at 4:30pm. As seldom shore dabblers we had learned some good lessons among which would be: buy a bigger landing net, tie some stronger and more appropriate rigs with bigger hooks, perhaps add squid to the bait bucket next time, and waders would be a good move too. We must also try not to crap ourselves when a monster fish tries its best to take one of us water-skiing!