Des Westmore fancied doing something just a bit different, and took the whole family to San Diego on the Mexico/US border where they fished for yellowtail and bonito … and fed a few hungry pelicans!

San Diego has often made the news for less than alluring reasons over the last couple of years. Summer wildfires raged out of control, destroying homes and businesses with damage running into millions of dollars, and many people were left homeless. Ironically, one of the main draws to San Diego is its consistency of climate, which remains in the seventies of Fahrenheit most of the year, with low annual rainfall. Temperatures soar only on rare occasions, chiefly when easterly winds called Santa Ana’s bring hot, dry air from the inland deserts. It was these winds that fanned the flames of the recent terrible fires.

San Diego sits just about on the USA/Mexico border at the southernmost tip of California. From a UK angler’s perspective Los Angeles and San Francisco tend to hog the limelight as West Coast destinations, but I believe San Diego beats both as a holiday destination as there is plenty for the whole family to enjoy. And there is, of course, some excellent and diverse fishing for visiting anglers to lose themselves in. 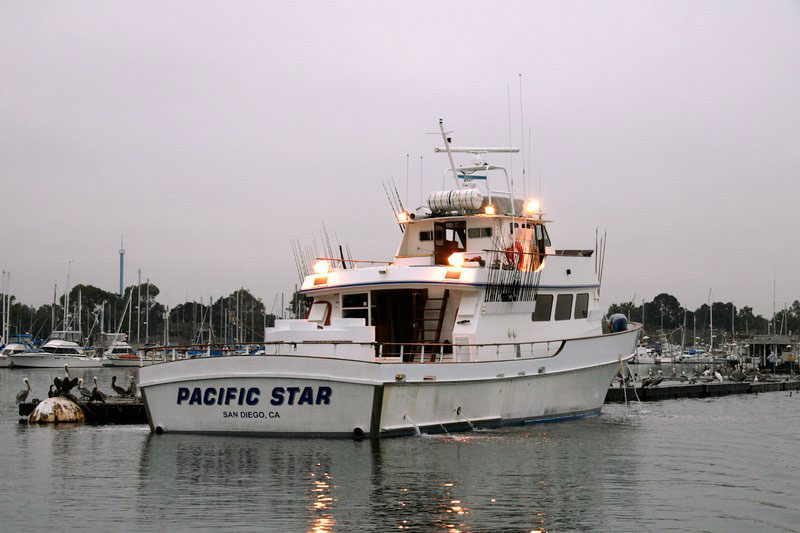 The destination offers four main types of boat fishing trip. There the big ‘party boats’ that usually undertake twice daily scheduled, operating a fixed price per head arrangement. Boats such as the ‘Dolphin’, go from 06.00 to 11.30 and 12.30 to 17.30, and charge around $40.00 per angler. The boat is licensed for 149 people … you won’t find that many bodies on the trip but they do get pretty crowded. These excursions offer excellent value for money, but are aimed more towards casual holiday anglers or those on a strict budget. Then there are the ‘Six pack’ boats, so called because they generally take a maximum of six anglers. These craft can be anything from 26 feet – 65 feet long with a fly-bridge.

There’s also more specialist long range blue water fishing trips that tap into truly world class tuna fishing for example. These could be one to five-day affairs and may take you six hundred miles down the Mexican coast. The ‘Pacific Star’ runs trips like this, which may cost over $20,000 for the charter. It sounds expensive but groups of up to 25 anglers can go, and meals and berthing are included in the price. Much as I would have loved to indulge in this type of adventure, it would not have been well suited to a family outing.

I opted for the final option – fishing with a guide in a fast open boat up to around 25 feet in length, with a party of two or three anglers. My guide was Kelvin Nettleton whose business is ‘La Jolla fishing’ (pronounced La Hoya). He offers two types of small boat trip, fishing the La Jolla kelp beds and the San Diego bay areas. Group trips are aboard ‘Jasara’, a 23’ Sea Pro which is kept at a dock. Various trip options are available but a six-hour charter costs $450 with a maximum of four anglers. Alternatively, Kelvin offers single angler trips on ‘The Flare”, a smaller beach launched boat. A six-hour trip costs $250, but there are shorter trip packages (two hours minimum) at $75/hour.

A six-hour trip aboard Jasara with my wife and daughter was arranged. We met Kelvin at 06.30 at the impressive marina. The weather however let something to be desired. While the desert may bring those warm Santa Ana winds, onshore breezes often give rise to a fog termed the ‘marine layer’, which bring temperatures down and make for gloomy conditions.

Once underway, our first stop was to get bait. Live-bait is big business in San Diego, and there are lots of huge pens floating in the harbour holding sardines and anchovies. The bait office is more a hut situated on top of the pen, and it’s a simple matter of pulling the boat alongside and filling the tanks with bait fish. As the covers came off the pen, the ever vigilant pelicans chanced hoping for a free feed. The pelicans were on any dropped fish in a flash, and protective netting was kept in place to stop the birds diving into the tank. We ordered ‘two scoops’ for our day out, but the long-range boats can order four-hundred scoops which must give the pelicans plenty of scope for a freebie. With bait aboard we cut out into San Diego bay. 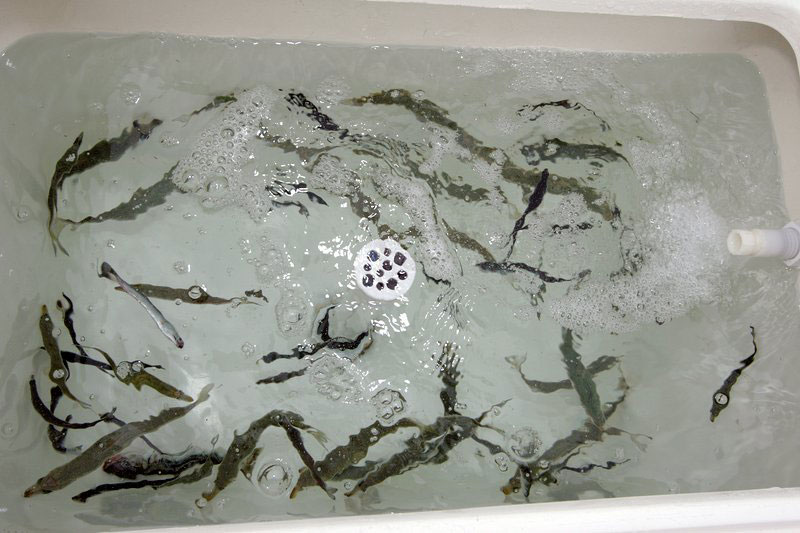 Kelvin decided to start the session trolling Rapalas – ‘dragging’ as it is referred to locally. Our intended species would be yellowtail, a hard fighting fish of the amberjack family, though we would probably also catch bonito, which are of the tuna group. Kelvin set up two rods so that the drag setting was just overcoming the considerable pull on the lure caused by a fast trolling speed. The Dolphin party boat was close by, and I could see them throwing in copious amounts of fish-attracting chum. Unfortunately the chum also attracts sea lions, which definitely do not help the fishing.

Yellowtail for a pink princess

The combination of marine layer gloom and the speed of the troll made for quite chilly conditions, so I was relieved when one the ratchets screamed impressively. Kelvin shut the engine and handed the offending rod to my daughter Bronwyn, as it had been agreed that she would take the first hook-up. It was clear that Bronwyn would need some help as a very strong fish made straight the sanctuary of the kelp beds. Kelvin helped and between them they turned the fish. Bronwyn did the rest and soon steered a fine 10lb yellowtail to the side of the boat. We had bagged our target species, but I couldn’t help but worry that we had peaked too early. 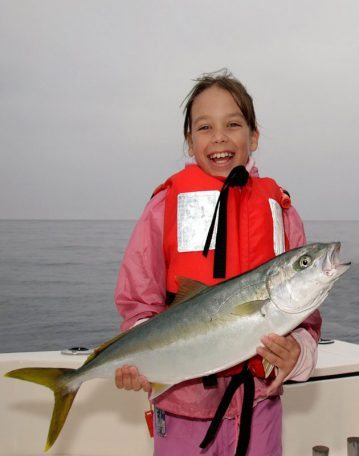 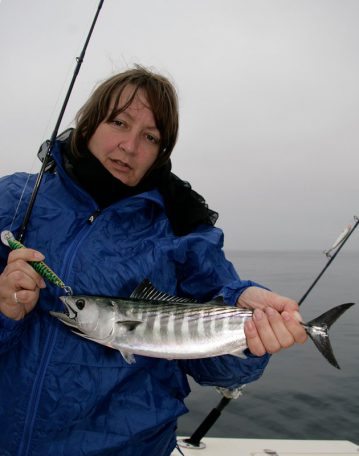 Our next trolling run had only just begun when the ratchet betrayed another searing run. My wife Marilyn is no mean angler and had this one quickly under control despite the fish making several powerful streaks against the drag. This fish not in the same league as Bronwyn’s and turned out to be a fine bonito of around four pounds. Things were looking good for fish but the next run proved quiet. Kelvin had hoped that as the sun rose in the sky, it would burn off the marine layer which would make for better conditions. This wasn’t the case and the fog remained all day. 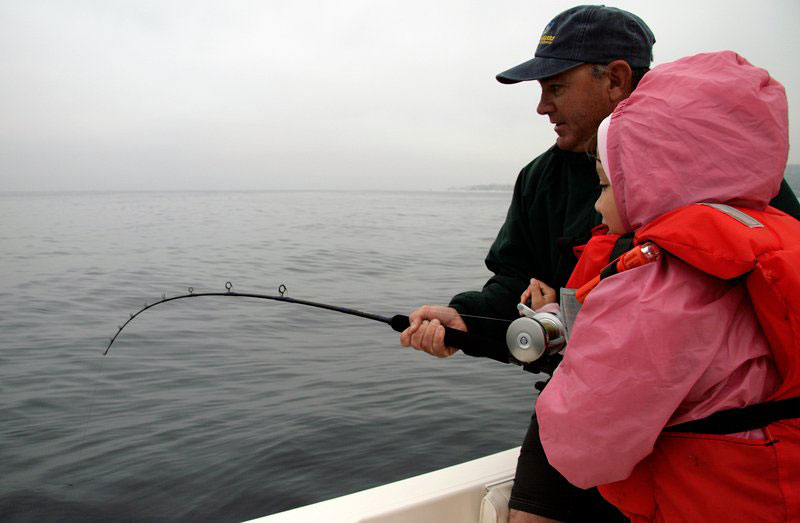 We switched to live baits. I assembled a combo that I had brought with me from the UK: a six-piece Greys 10-20lb Excursion rod and an Okuma Catalina reel spooled up with 20lb Fireline Crystal to 40lb Seaguar fluorocarbon leader. The technique was to fish on the drift and free-line the live bait – no weight or float is used. Line is stripped off the reel by hand to get the live bait away from the boat, while the reel is left in free spool with the ratchet on. 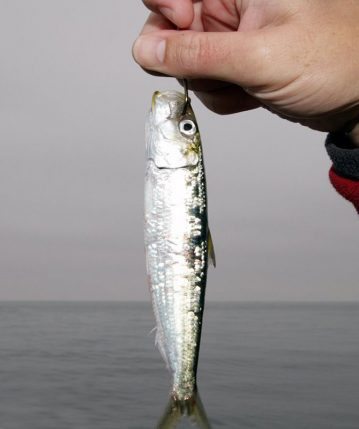 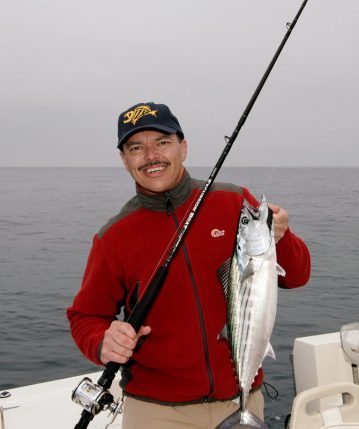 With live bait fishing it is the panicking of the bait fish that signals something is about to happen. This is followed by a whole lot of messing about as the predator turns and swallows the bait. The final stage is a superb ratchet run as the fish makes for the horizon with its meal. It is at this stage that the reel is thrown into gear to set the hook, and it is important to let the run really get going to ensure a solid hook up. It wasn’t long before I went through this sequence events and locked horns with my first fish of the trip. A strong fight ensued, with a string of long, shallow runs indicative of a bonito. The signals were true and a well conditioned 6lb bonito was soon mine. If you have never encountered a bonito close up, lets just the impressive teeth are proper finger-shredders and unhooking is best achieved with pliers. 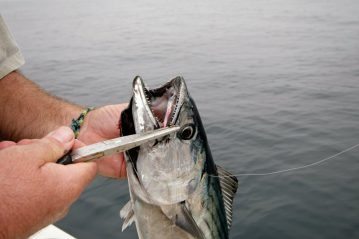 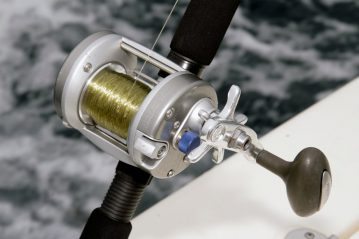 My gear had performed well but I noticed that braid was not as well suited to free-lining as the mono that Kelvin used on his Quantum reels. Because there was so little tension on the line, it did not bed down as well as mono and then, when a fish ran, the now taught braid was digging into itself on the spool and snagging. We carried on fishing, and we had loads more fun with bonito, but no more yellowtail were taken. The regular action suddenly went quiet. A sea lion popped its head up behind the boat then gave us the opportunity to have a good look as it circled and dived. Bronwyn thought this was fantastic and was quite miffed when Kelvin fired up the engine and moved away.

The sea lion dodging shift proved a good call. We encountered more hard-fighting bonito before moving three miles close inshore to try for a calico or spotted bass in the heart of the La Jolla kelp beds. The method here was to cast shads into the massive fronds of kelp that moved spookily in the tide. We had no luck among the jungle of kelps but arrived at the dock still buoyed by the experiences of earlier in the day. Our remaining live bait was fed to the gluttonous pelicans that caught and swallowed everything Marilyn and Bronwyn threw with gusto. 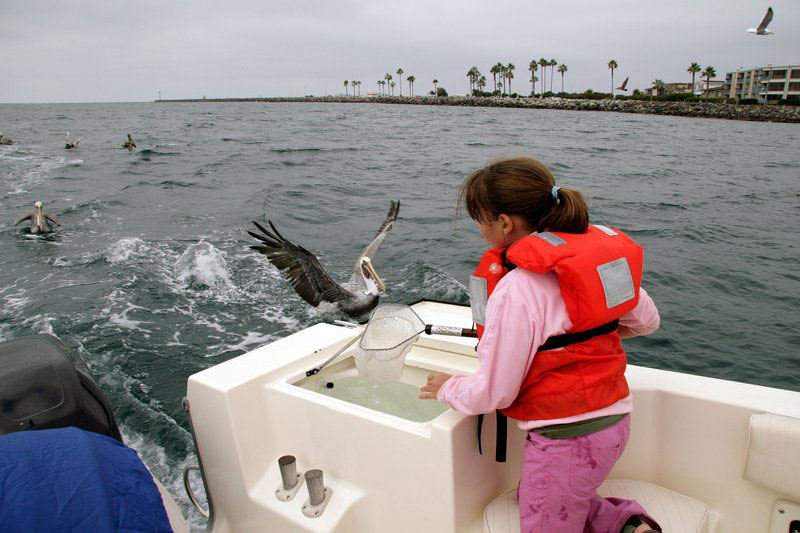 San Diego has its own airport but there are few direct international flights. We flew with Virgin Atlantic to Los Angeles LAX airport. Because the flight was 12 hours, we spent the night at the Radisson hotel at LAX, undertaking the two hour drive on to San Diego the next morning. All the big names like Alamo, Dollar and Hertz have depots there. 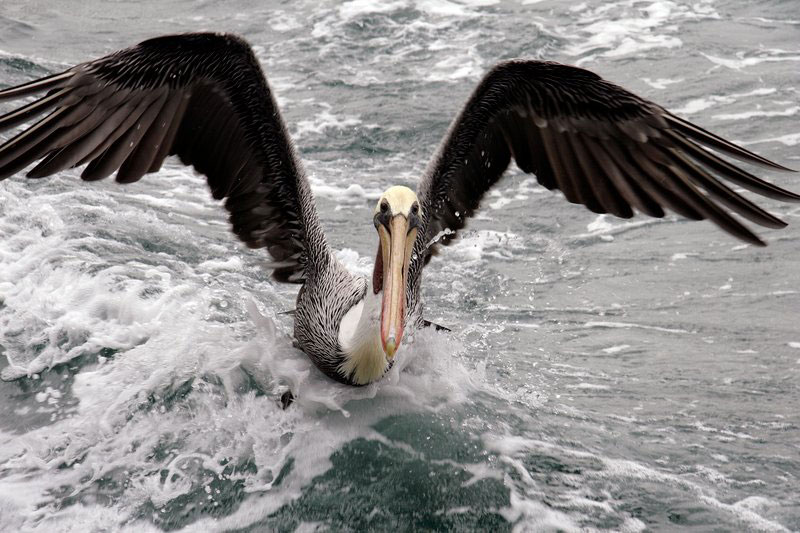 In San Diego we stayed at the Handlery Hotel, which is in Mission Valley. Although not right on the coast, it’s just 10 minutes drive from the fishing docks, and an excellent location for getting around San Diego where there’s plenty to do and see. The Handlery hotel is used by Virgin Holidays and Expedia. Kelvin Nettleton can be contacted at www.lajollafishing.com