Quick investigation of many new shore and boat reels often reveals insufficient internal grease to keep corrosion at bay. Des Westmore has said as much for ages and shows how to ensure than a brand new reel is ready to cope with life in the saltwater environment.

Visitors to Planet Sea Fishing digital magazine who have read my reel reviews will be aware that I often rant about how many brand spanking new reels are inadequately greased at the factories. This serial oversight fails to adequately equip reels to resist corrosion ravages should saltwater get inside the reel, as it surely will sooner or later. Take a typical brand new reel like the Daiwa Saltist shown here (below left) for example. Without adequate internal protection, saltwater ingress will quickly cause it to look more like the worse-for-wear Shimano Trinidad in the next picture.  Any reel is susceptible to deterioration in the absence of adequate internal protection, and I am not singling out brands in my examples. Component quality does make a difference however, but ultimately the only difference between top quality and cheaper internals is how long they take to degrade. 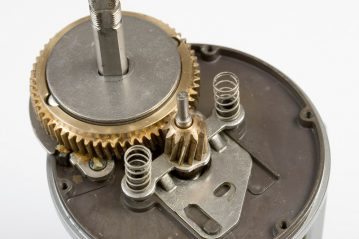 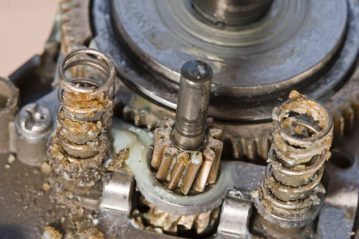 In this feature I’ll detail the required materials and explain how to protect your brand new reel straight out of the box without fuss or the need for a complete strip-down. WD40 spray needs no introduction, but in my opinion there are better products available. My reasoning is that while WD40 is great for displacing moisture it doesn’t possess a particularly high lubricant content. An excellent alternative is GT85. This aerosol product displaces water and contains PTFE which bonds to the surface of the metal and provides ongoing lubrication. GT85 is inexpensive at around £3.00 a can. Alternatively, keen motorcyclists may be familiar with a similar more expensive product called ACF-50 manufactured by Lear Chemical Research Corp. in the USA. Discussion with this company led me to a derivative product called ‘Corrosion Block’ which is specifically formulated or use in saltwater environments. Corrosion Block comes in a pressurised aerosol or in handy sized pump dispenser, and without getting all technical about how it actually works, let me just say that it is the best substance for staving off internal real corrosion that I have come across to date.

As well as the spray product, there is also ‘Corrosion Block’ grease which is an anti-corrosion compound and fully waterproof with EP (extreme pressure) additives. These additives ensure that the molecules of the grease are not squeezed out of the way when two surfaces come together under high forces. I have used these products for a few months and am more than happy with their integrity and performance. It goes without saying that the best way to avoid corrosion is for the salt water not to get in your reel in the first place. This is totally impossible in practise but to help I would recommend purchasing one of the many neoprene covers that are available from a number of manufacturers. Don’t store your reel in it but keep it covered up whenever practical especially when you are underway or when the rod is in the rod rack. It is these times that the reel is most at risk from salt spray which will find a way to penetrate. 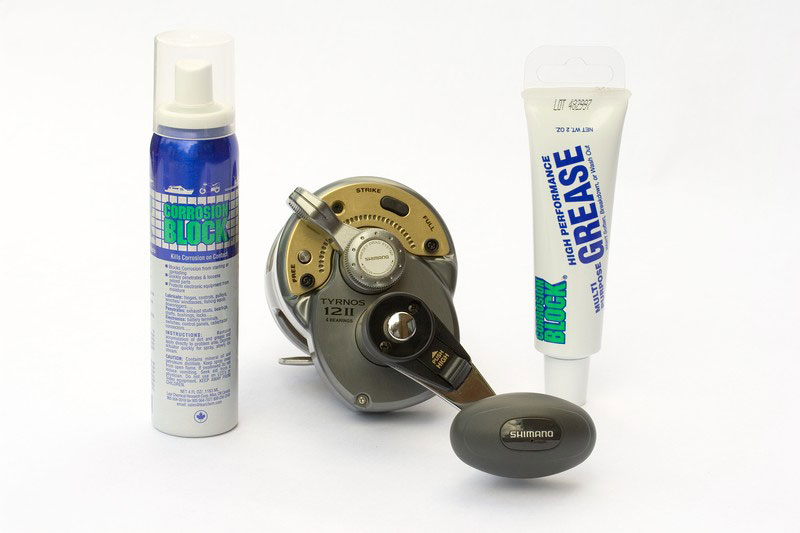 Typically, anglers are reluctant to dismantle a brand new reel of complex design, such as Shimano’s two-speed Tyrnos, (above and below) but most boat and shore multiplier reels are reels are fairly simple in their construction. Corrosion Block can help as it only requires a film a few microns thick to be effective and it works into gaps between components that would typically harbour a damaging salt build up. In all the photographs, I have deliberately applied the Corrosion Block generously so that it can be seen easily. In reality this is too thick and it would be better to wipe it around with a cloth or brush. One word of caution, because this product penetrates so well always have the drag clamped up tight when applying Corrosion Block. Afterwards, store the reel with some drag pressure still applied … something like 25% of full pressure. This stops contaminants of any form getting between the drag plates by capillary action. At one time it was recommended to back the drag off completely but this was in the days of felt and leather drag washers which would compact and harden if the drag was left on.

Starting with the handle, the two-speed control buttons are perfect places for salt to build up and they also require lubrication for smooth operation. Corrosion Blocks tends to foam on application which helps it penetrate. The Tyrnos has a ratcheting drag quadrant typical of many lever drag reels. Apply the Corrosion Block along the gap between the quadrant and the sideplate and then smear the excess all over the front of the plate. Corrosion Block should also be applied to all screw heads. Ideally, slacken the crew half a turn before application to ensure it reaches the threads as well as under the head. Between the reel foot and the frame is a corrosion hotspot, even more so when the reel foot is stainless steel and the frame is aluminium alloy. Corrosion Block grease can be applied to such things as the pillars for the rod clamps and also the nuts or screws on the clamps themselves. 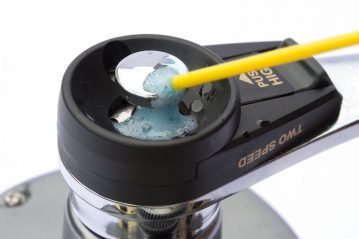 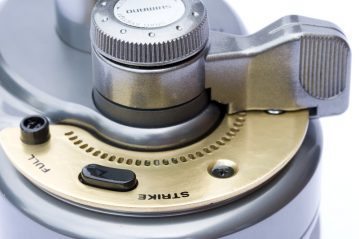 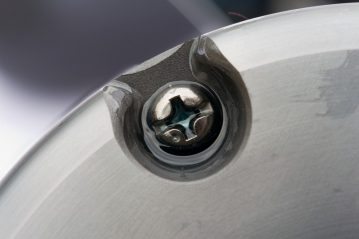 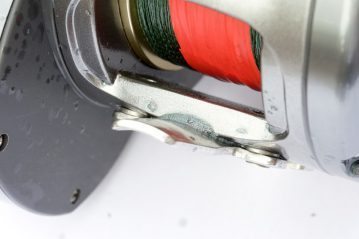 If you are confident to take the reel apart then a lot can be accomplished by just taking the sideplates off, as shown below with an Okuma Catalina. Apply Corrosion block, either the spray or the grease to the internal surfaces.  Also apply it to the drive train mechanisms and springs. If the gears look dry and are accessible, apply grease to them. If the reel has a levelwind, applying the corrosion block spray to the worm will ensure that the bearings or bushes at either end are also lubricated and protected. Finally, lubricate any ball races with a couple of drops of good quality oil. There are a number on the market but the one sold by Penn is very good ,and there are also a lot of waterproof synthetic oils sold for use on mountain bikes. I use Reel-X as a rule, which is difficult to find in the UK but can be found on the internet. 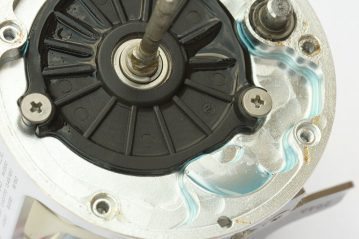 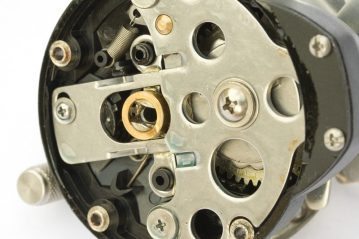 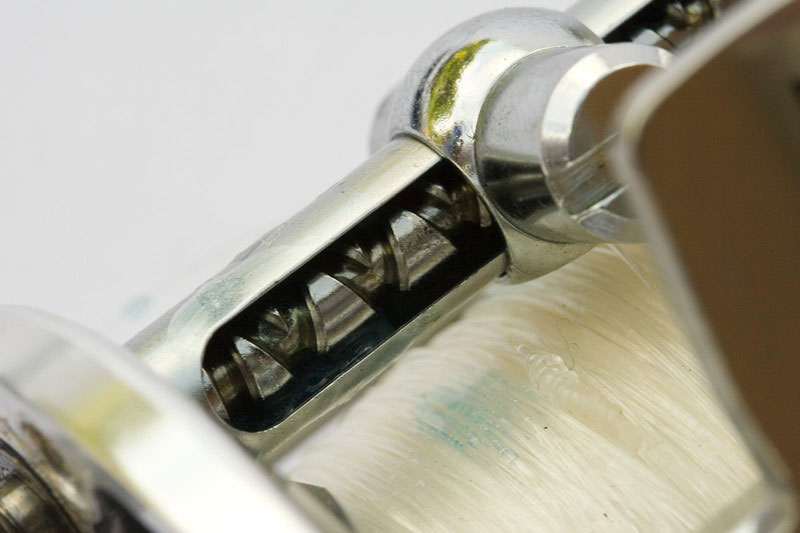 All reels are a bit different, but this basic approach covers most situations. The worst thing anyone can do is leaving reels covered in salt water, festering away between trips. Wash reels thoroughly after each trip with plenty of fresh water, but not water under pressure as this drives salt inside the reel rather than washing it off. I either use a plant atomiser, or if I am outside, a spray gun on my garden hose on the ‘mist’ setting. Again have the drag screwed up tight when doing this. Afterwards, the reel should then be left somewhere warm to dry out. Apart from the occasional re-application of Corrosion Block or oil in the bearings, that’s it. 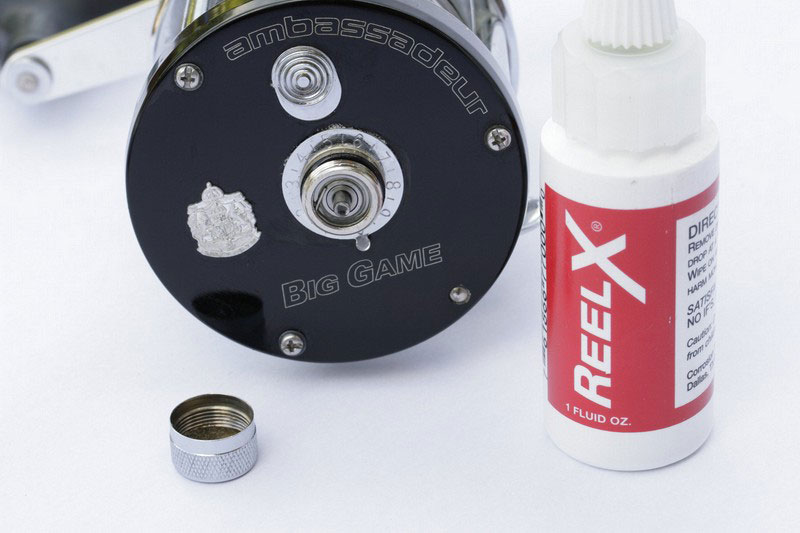 A follow-up feature will look at how Corrosion Block can help to deal with reels that have been neglected to the point of failure, and also a complete strip-down and re-assembly.

For more information on corrosion block go to www.corrosionblock.co.uk