A Day on the Kilmore Reefs

Ashley Hayden of An Irish Angler’s World enjoys a day afloat over the rocky pinnacles off Kilmore in Ireland.

Drifting east, pushed by an ever increasing tidal flow, a lazy swell lifting and rolling under charter vessel Autumn Dream, eighty feet below three black pollack feathers worked their magic over the boulder fields and kelp beds close to the Conningmore rock, south west of the Saltee Islands. A lask of fresh mackerel adorned the bottom hook blood and juices wafting down tide, letting out line to remain in contact with the bottom, thump, thump, striking and reeling in unison a head shaking ferocity transmitted through the braid indicating a ling or maybe a good cod, I began the long retrieve. 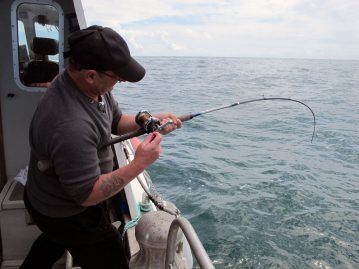 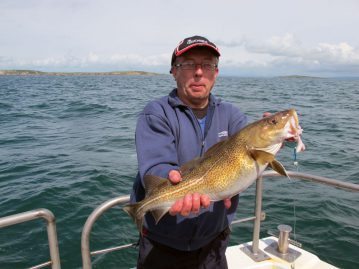 Pumping my catch towards the surface its dogged resistance never relenting, twenty feet below a long whitish shape comes into view, skipper Eamonn Hayes readies the net and does the honours swinging a reef ling topping eight pounds+ over the rail. “Good man Ash, bait that lower hook up and get it down again”. Turning his attention to all on board Eamon advises, “bait the bottom hook only with fresh mackerel, changing every drop down lads”, then further quips in his broad south Wexford accent, “and remember boys every time you get hung up in a rock and lose a rig you’re keeping a nice Asian girl in a job”. Autumn Dream is a happy boat and the party of Welsh anglers who kindly invited me out are having a ball.

Some of the party are regular visitors, although ten in the total contingent of twenty on this visit are first timers. They come for the variety and quality of species present and are certainly getting value for money over the Kilmore reefs today. Pollack, coalfish, cod, ling, ballan and cuckoo wrasse, pouting, mackerel, and launce continuously keep rods bending, smiling faces populate the deck, ribald jokes and laughs are a constant, the chaps are having fun. “We’ll be crossing kelp beds now lads, there might be a few cod” advises Eamonn, on cue over go a couple of rods. Straining to lift up from the depths, 20.lb class rods in their fighting curve, codling up to 6.lbs a welcome sight. 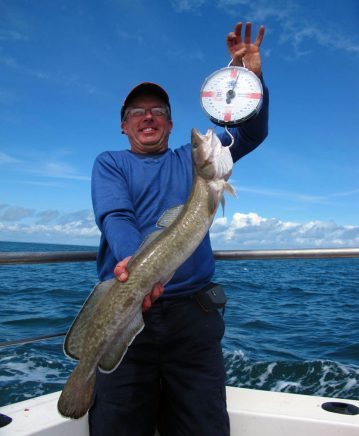 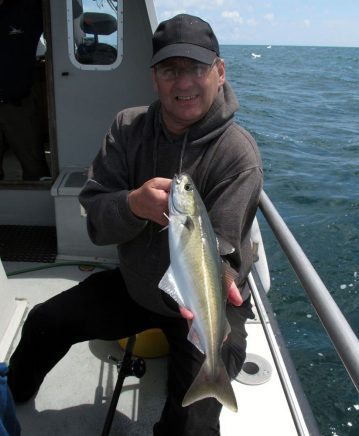 The group are divided equally between Autumn Dream and Kilmore Quay based charter vessel Enterprise skippered by Eamonn’s brother Dick Hayes. Both men offer a wealth of sea going experience stretching back over thirty years and know the inshore reefs, shoals, and banks off Kilmore Quay intimately. With unseasonal storms over recent days having dirtied the water and scattered fish, both Eamonn and Dick communicate returns throughout the day resulting in fine catches aboard both vessels. Pollack predominate with coalfish making an appearance now and again.

Reef fishing off Kilmore Quay requires anglers to be vigilant, the ground is rough, boulder strewn and kelpy. With depths ranging from 30 – 100 foot plus (16 fathoms+), averaging 60 foot, allied to rolling seas and the need to keep hard on the bottom tackle losses are unavoidable. Bring lots of leads ranging in size from eight ounces to a pound and stock up on various hokai and feather rigs suitable for pollack, cod, and ling. I find black , white, and purple colours work well off Kilmore in hook sizes 3/0 and 4/0. Keeping in contact with your lead by not letting too much of an angle develop, maintaining more or less straight up and down reduces losses. Create a mental picture of the sea bed by touch, it requires concentration, lifting and dropping the lead, winding and releasing line to work the undersea troughs and rises, however the effort pays off in terms of fish and retained rigs.

Lines up was signalled at 16.00pm, Eamonn pointed the bow north east towards Kilmore and accompanied by Enterprise we headed for harbour, a shower, pints, and dinner in that order. Lots of fish were caught with many released to fight another day, whatever fish retained being gutted and filleted as we motored back. Gulls followed, swooped, squawked, and fought for pieces of offal in that age old tradition associated with returning fishing boats, there is no doubt it was a great day. Thank you to Alan Duthie and the boys for inviting me, and to Eamonn for his professionalism, warmth and fun approach. 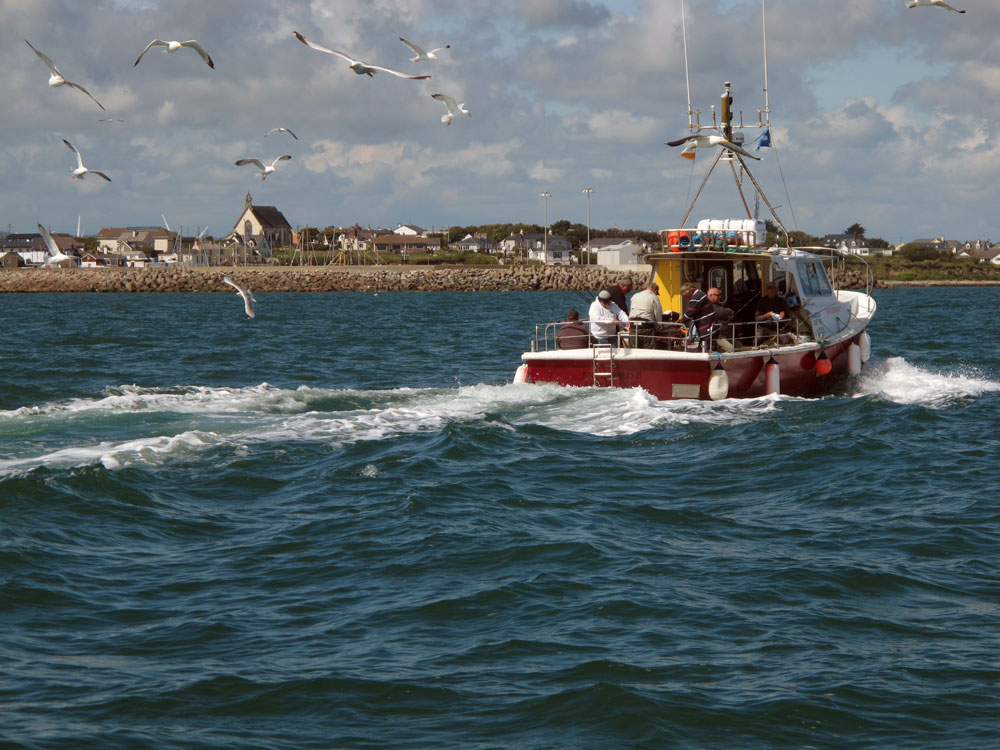 We stayed at The Quay House Bed and Breakfast, Phone, +353 (0)53 91 29988, located on the left as you drive down the main street of Kilmore Quay, just up from Kehoe’s public house. A fine establishment well run by husband and wife team Pat and Siobhan McDonnell, the Quay House caters for anglers providing equipment storage, bait refrigeration, and catch freezing facilities. Full Irish breakfasts set up the day, hot showers are ready on return, and bait can be ordered in advance and during your stay through Joe Carley of South East Bait Supplies, phone +353 (0)87 944 0945. Fresh mackerel is the top bait off Kilmore with ragworm necessary if targeting wrasse.