“The Bountiful Ocean” are words used by poets, artists, early mariners, fisher folk and even scientists once upon a time. We have all romanticized about what the ocean has to offer – those unseen riches, poised to take our carefully prepared bait, smash our surface plug or get snagged in our nets.  Advancements in fisheries science have highlighted the fact that we are often under misconceptions about what we catch and how many there are out there.

One of the amazing things about fishermen – whether they are recreational fishermen or fishermen by trade – is that they always seem to know where the fish are. This has been a characteristic of fishermen for hundreds of years and mostly comes from experience, and knowledge of the fishing areas. Fishermen pride themselves in this knowing but herein lies the problem. In recent decades, this skill has been replaced by overwhelming improvements in technology such as GPS, cellphones, acoustic technology etc. which allow fishermen and fishing vessels to detect target species and target fishing areas with pinpoint accuracy. The fact that we as fisher folk can figure these things out through ancient knowledge or our fish finder, tells us something about fish behavior. It is well known that fish tend to aggregate around structure for refuge, areas of high productivity for food or areas of significance for spawning. These are the areas that are known to fishermen as the ‘best fishing spots’.

The fact that fish tend to aggregate in particular areas and that it can be predicted that the fish will be present in those areas at specific times of the year, tide state, moon phase, night time etc. also leads to a concentration of fishermen in these areas. This characteristic of fish behaviour means that fish populations are neither evenly nor randomly distributed through-out the oceans – fish have preferences as to the areas they occupy based on many factors such as food resources, protection or spawning. This being said, once the preferred habitats of a target species are known, it becomes much easier for fishermen to catch that species. Aggregations of fish also make it much easier to catch more fish. This makes fishermen very happy and leaves scientists around the world gravely concerned. Herewith follows the conundrum. 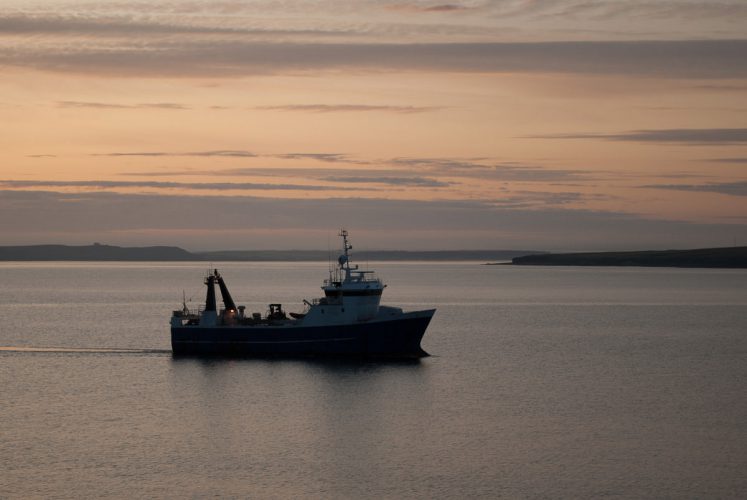 In areas of high fish abundance, fishermen need to put in less effort in order to get higher outputs of fish than they would in areas of lower abundance. This means that when the catch per unit effort (CPUE) is calculated in these areas by scientists trying to manage recreational or commercial fisheries, it indicates that relatively low effort was required to gain high catches – ‘there must be many fish around’. The CPUE is traditionally used in fisheries science as a measure of fish abundance but the number of fish you catch per unit time is also used unknowingly by fishermen as a measure of the amount of fish around to catch. However, due to the high concentration of the fish in a limited area because of unseen benefits to the fishes to be there, the CPUE value is actually inflated. This is known as the ‘Basin Effect’ – the effect of the accumulation of fish in a localized area on fishing success. If the same fish population was to be randomly and evenly spread over a larger area, the number of fish caught applying the same amount of effort would be much less. This presents us with the basis of the misconception.

The elevated CPUE values caused by the Basin Effect leads to overestimations of stock size in the minds of recreational and commercial fishermen, often resulting in escalated quotas, and ultimately unsustainable fishing practices. It is therefore actually very hard to estimate the number of fishes in the sea without biasing our estimates. Most of the information used by fisheries managers around the work is fishery-dependent data – information coming from the fishermen themselves. Recreational and commercial catch records are biased because we know where to find our target species and how to catch them. 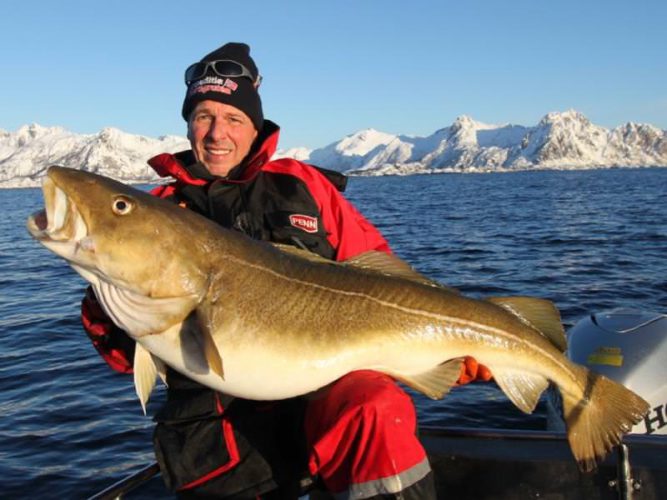 The aggregating behaviour of Orange Roughy (Hoplostethus atlanticus), a deep-sea perch has also resulted in a population collapse off Australia. This species was heavily exploited in a fishery in the area since the 1970’s. The fish were caught in large numbers and soon the species was showing major decline in areas off Tasmania. It was not known at the time that the large numbers caught where large proportions of the population that were aggregating to spawn. Overfishing on spawning grounds has now left this long-lived, slow growing species highly threatened. These fish have been aged to 149 years and in 20 years the population has been reduced to a fraction of pristine stock. 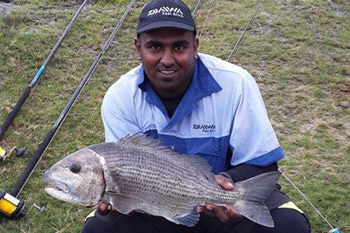 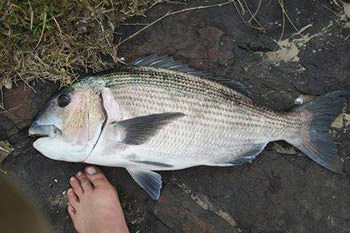 Fortunately, once these types of problems were identified in fisheries, scientists could recalculate and management strategies were put into place to curb the decline of populations in some cases. These included reductions in total allowable catches (TACs) and individually transferable quotas (ITQs) to monitor catches and populations sizes, as well as gear restrictions to reduce fishing mortality. Less emphasis was placed on CPUE in fisheries management, and more reliable methods of assessment such as fishery-independent acoustic surveys were employed to ensure the stability of population numbers in these fishes. Unfortunately not all fishing sectors have these safeguards. The recreational fishery in South Africa suffers major population declines in recent decades. 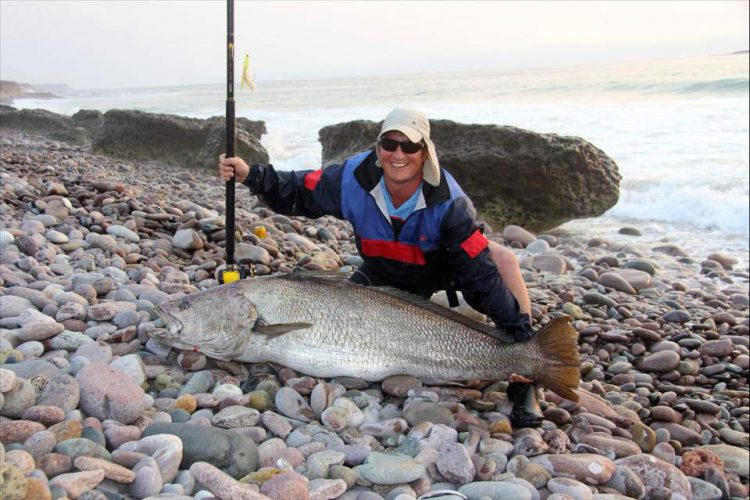 The slow growing, late maturing coastal fishes in South Africa face the quagmire of the Basin Effect in the minds of their captors. Many of these species are resident in their habitats, some migrate to spawn, some gather in large numbers to spawn and many use estuaries as nursery areas. The Basin Effect causes major misconceptions amongst fishermen about the abundance of common angling fish engaging in aggregating behaviour. This misconception impedes the success of education of fishermen on the plight of angling fishes now facing major population collapse off the South African coastline. Many shore anglers ignore fishing regulations deeming them an unnecessary nuisance. Many anglers believe they cannot do damage with a rod and line and often pass the blame to the subsistence or offshore sector – another misconception. The subsistence sector is a relatively small component of the fishing force in South Africa targeting coastal species and the large fishing fleets of the country don’t have access to the shallow-water species that are heavily exploited. 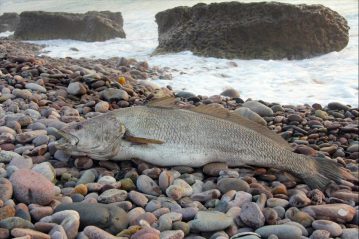 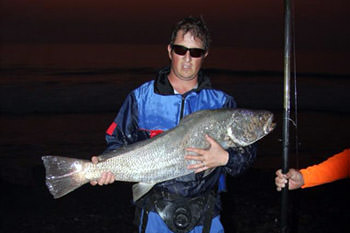 Populations of Baardman, Dageraad, Dusky kob, Englishmen, Galjoen, Garrikc, Geelbek, Redsteenbras, Red Stumpnose, Riverbream, Scotsman, Seventyfour, Silver Kob, Squaretail Kob, White Musselcracker, White Stumpnose and White-edge rockcod are all officially collapsed in South Africa. These species are shallow-water, coastal species that are available to the recreational (Rock and Surf or Estuary sectors), ski-boat and subsistence fisheries only. All these species grow slowly; reach sexual maturity only after a number of years; have complex biology in that many change sex after a number of years; and most are harvested below breeding size. For example, Dusky kob reaches sexual maturity at about 1m in size (5-6 years of age); yet fish are harvested below this size and are unfortunately regulated as such (Minimum size is 60 cm).

Many species that undergo sex change, especially late in their lives, are now subject to skewed sex ratios in the wild. Poenskop or Black Musselcracker only become male after 18 years of age, now that most large individuals are fished out, the population is mainly female dominated and these too are harvested with such pressure that few live long enough to change sex and become males. Many species are legally harvested at size of sexual maturity (White Musselcracker) yet their population status suffers the same fate as the kob. Shear harvesting pressure dictates their population status. All these species suffer the consequences of the Basin Effect by virtue of spawning behavior, feeding strategies, migration, estuary nursery use or reef residency. They aggregate and their young are trapped in the ‘safe refuge’ of estuary nurseries, a fishing hotspot around South Africa. The problems are multifaceted but fishermen behaviour and fish behavior are at the core of the problem. 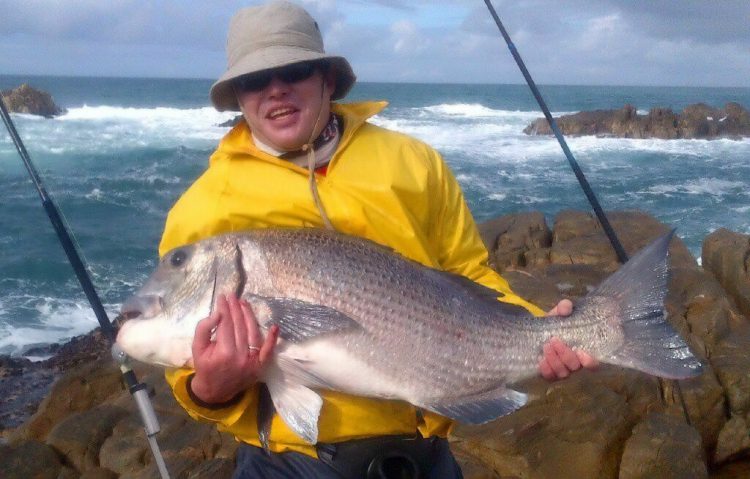 The only solution is angler education and government legislation in support. A ban of all kob catch retention is long known by fish biologists as the only solution to save this species from local extinction off South Africa. How well received would such a ruling be? Firstly, would it be supported amongst the various fishing sectors in South Africa and secondly, would it be enforced in South Africa given the extent of enforcement issues affecting our marine resources. The only solution in the interim is angler education and higher penalties for the illegal trade in recreational fish species. Recent fish poaching along the entire South African coast by members of the recreational sector who sell to restaurants and overseas markets has become an epidemic and exacerbates the problem. In the Eastern Cape, perpetrators who fish under recreational permits are also known abalone poachers with convictions or pending cases against them. Marine resource crimes coupled with the general lack of education in resource users is decimating coastal fishes in South Africa.

Know your species, know its vulnerabilities but use the knowledge to understand how you have been misled and fish responsibly. Report environmental crimes against fish. Name and shame wrong-doers in public forums like Facebook & fishing sites. We don’t want them amongst us. Fish ethically and maybe your grandchildren will also have fishing stories about the same species to share with you in the future.

Thanks to Dr Nadine A. Strydom and Ms Sandrini Moodley, members of the Zoology Department at Nelson Mandela Metropolitan University in Port Elizabeth, South Africa for permission to reproduce this paper and to South African Deep Sea Angling Association  for their input.

Thanks also to members of the South African Shore Angling Association on Facebook for permission to use their photos and to No Problem Fishing Charters for the cod photo.