It is not often that I take both of my fly rods with me on any particular trip, but here I was loading them into my truck for stripped bass. It was going to be a very early morning start the next day so I needed to get everything packed up for striper fly fishing on this warm and humid June night. I was meeting up with Jack and Larry at 4:30am so I needed to get this done and get some sleep.

At 2:00am I was out the door and on my way. It is about a two-hour run to the rest stop on the Maine Turnpike where I was to meet up with my striper fly fishing buddies. They were already there when I pulled in. We quickly went over our plans and headed back on the road again. We wanted to make the high tide so needed to get a move on. Our plan was to hit the Mausam River in Maine, near Kennebunk Beach striper fly-fishing and then head down the coast to Ogunquit and the Ogunquit River for sea-run brown trout.

While Jack and Larry had fished this before, this was going to be my first time going after “stripers” with a fly rod. It was also my first time going after sea-run trout, slob trout in the UK. Though I was a bit concerned about the striper fly fishing, I wasn’t too worried about the trout. I’ve caught plenty of trout in my day, so these shouldn’t be much different, right? As you will see I was really wrong on this one. 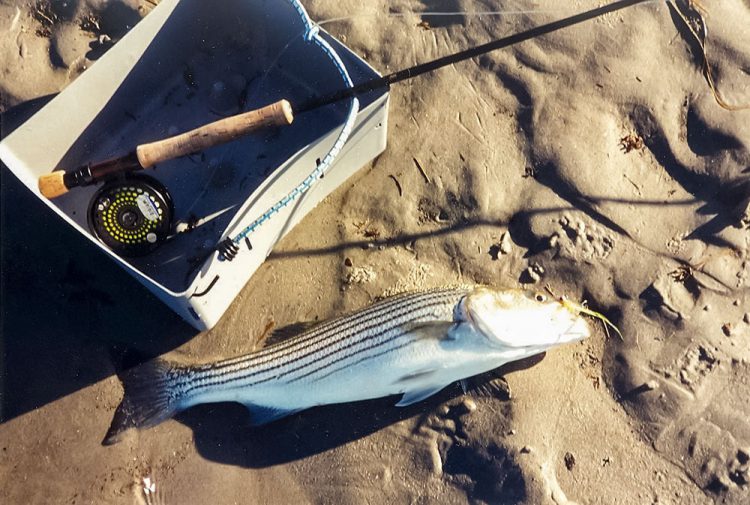 It was still dark when we arrived at the Mausam River. From the light from my Bushnell headlamp I donned my waders and put together my fly rod. Running the line up through the eyelets is a pain in the daylight, but it is even worse in the dark with just the light from a headlamp guiding you.

Tackle Up for Striper Fly Fishing 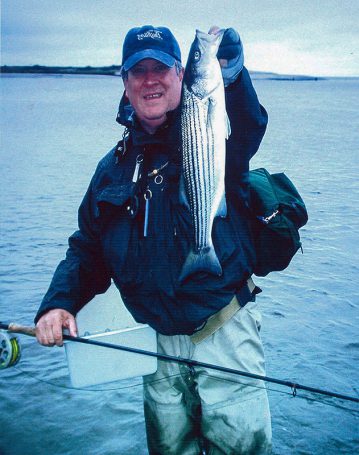 My gear for this outing consisted of my waders, my fly rod and a stripping basket to catch the loose line. My fly rod was a nine foot, two piece, seven weight Martin Classic with a matching Martin Classic reel. The reel was spooled with seven weight Cortland sinking line with a rocket taper.  Attached to the fly line was a 20-pound test fluorocarbon leader.

The fly I was using was a Clauser Minnow, a classic fly that has been fished by anglers worldwide to catch a variety of fish, in both fresh and saltwater. Normally most people who go after striped bass with a fly rod usually use at least an eight-weight rod, I prefer a nine weight. On this occasion a seven-weight rod was the largest I had and the one I use for northern pike, so it would have to do.

By the light of our headlamps we made it down the path to the water’s edge and we were the only people there. The tide was in; we had arrived just in time. Quickly we each took a spot and started casting. On my seven weight rod the Clauser Minnow, with its weighted head, felt like I was casting a traditional jig used on conventional gear. There were no fancy casts here. No long back casts. I fished that fly like I was using casting gear.

All of a sudden Larry had a fish on. His rod tip was bent and he was fighting the fish on the reel. No sooner than this fish was in and then released, Jack was hooked up. Then it was my turn. This was my first striped bass on a fly rod and I was so excited I almost forgot to get the fish onto the reel. My rod tip was bent and the fish made a few runs on me. Though the fish was undersized, what we refer to as a “schoolie”, on a fly rod it felt like a monster. This just wetted my appetite and I continued to cast. 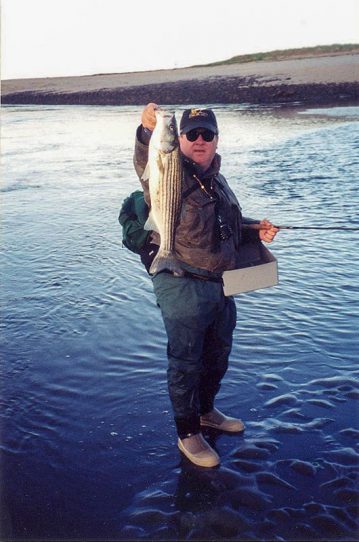 The sun came up and the tide began to ebb. We followed the water downstream as far as we could, making casts along the way. Eventually we ran out of real estate and decided to call it quits. We made our way back to the trucks satisfied with the fish we had caught. None of them were keepers, but they were sure fun to catch. Everything fights harder and feels larger on a fly rod.

Jumping in the trucks, we made our way south to the seaport town of Ogunquit. Parking in the community lot, we walked down to the river. The tide was out and it wouldn’t be back in for a few hours so we decided to go have something to eat. The tourists all gave us funny looks as we walked in the restaurant, but the locals, being fishermen themselves, were used to it.

We discussed the sea-run brown trout over our meal. Brown trout are not native to North America, so all of these trout started out as stocked fish.

Like their wild cousins, the Atlantic salmon, these particular trout spend most of their time in the ocean, coming into the river to spawn and to feed. While in the river these trout mainly feed on sand eels, so that is what we were going to try and mimic with our flies. My rod for this adventure was an eight foot, three piece, 5/6 weight Pflueger rod coupled with a Shakespeare 1094 reel. The reel was spooled with Cortland five weight sinking line with a nine-foot fluorocarbon leader. The fly I used was one specially tied by Jack just for these fish. It was a streamer that was designed to look like the small sand eels.

The tide was starting to flood so we suited up and headed for the water. From a small bridge, we could see the eels and then we could see the trout. In the gin clear water we could see them stacking up. If we could see them, then they could see us and we had no cover at all. We decided that our best bet was to get near the pilings of the bridge and take advantage of what little cover they offered.

Cast after cast I made to the trout, but I couldn’t get them to take the offering. Larry was the first to hook up and then Jack. I was still blanking out. By now the water was up to my knees and still rising. Good thing I was wearing chest waders. The rising water wasn’t the only thing we needed to be concerned with. 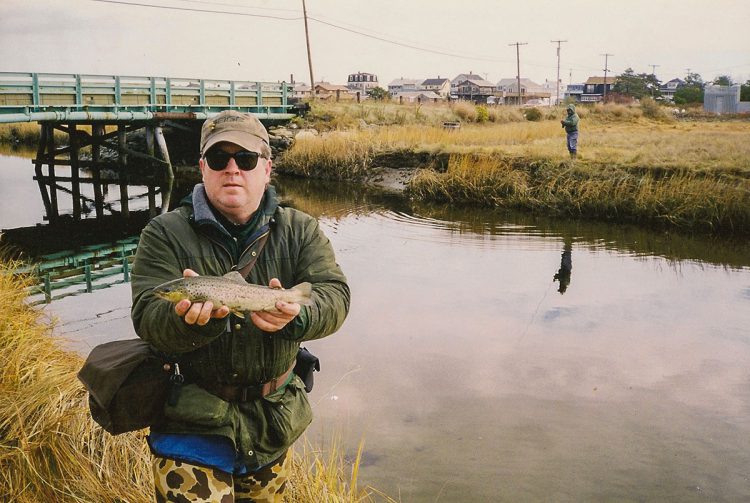 There was a pretty strong current in the river now and the sandy bottom acted like quicksand, so we needed to be aware of our footing at all times. Soon the water got too deep for use to safely fish. No trout is worth dying for, so we called it a day.

The day ended with each of us catching a few striped bass and Jack and Larry both caught three trout each. While I failed on the trout, the entire day was a learning experience, so I consider it a success.